The Central-African country of Cameroon is sometimes referred to as “Africa in miniature” because of it’s cultural and geographical diversity. As well as having its fair share of beautiful beaches, deserts, rainforests, and savannahs, Cameroon has excellent conditions for the production of great coffee.

Coffee production is important for the country – their Robusta is grown on the more coastal regions and their Arabica way up in the Western highlands. They also have their secret weapon: Cameroon Boyo coffee, grown by a handful of farmers dedicated to quality andfair trade. But more on that later.

First, let us give you the rundown on how coffee got started in Cameroon.

Coffee farming and production in Cameroon dates back to 1884, during the German colonial period. Unsurprisingly, they loved coffee so much that they opened trial gardens for its production in Victoria, Nkongsamba, Ebolowa, and Dschang.

They later extended the production areas for their coffees: in 1927, coffee beans were being produced in the West too. Just one year later, 200,000 coffee plants were planted is Dschang alone.

Coffee production seemed to be on the up and up in Cameroon: in 1990, there was a massive level of production, resulting in 156,000 tons exported, earning Cameroon 12th place in the world’s rankings.

Unfortunately, they couldn’t hold this position forever. Economic crises, low coffee prices, and governmental policies led to a decline in production. This has all led to a slowing in an activity that undermines Cameroon’s unique coffee and the dynamic, inspiring farmers that dedicate their time to grow an excellent product.

But Cameroon isn’t backing down: Brazillian coffee experts have been sought out to suggest solutions to this coffee conundrum. Getting tips and tricks from the world’s biggest consumer of coffee is a wise idea – we bet they know a thing or two about how they can help.

The coffees of Cameroon are produced throughout seven regions:

Different areas of the country are better suited to the production of different coffees. For example, coffee grown at higher altitudes is much more delicate and complex than those grown at lower altitudes because it has more time to develop its flavors.

Areas such as Bamileke and Bamaoun are found on Cameroon’s high plateau. The cool climate, heavy rainfall, and nutrient-rich volcanic soil mean that its best for growing great Arabica coffee beans.

The two main varietals of this coffee are Jamaica (Typica) and Java. Java has only recently been introduced to Cameroon – it’s known for its higher yield and resistance to coffee berry disease. This is a fungus that makes the coffee cherries fall off the plant prematurely, which impacts the yield massively.

The Arabica coffee season in Cameroon runs from October 1st to September 30th.

Cameroon’s Arabica is wet-processed: this is where after being picked the coffee cherries are sorted by being immersed in water. The bad or unripe fruit will float to the surface of the water, and the good, ripe stuff will sink. Nice and easy. This is one of the best ways for a large number of coffee cherries to be sorted at once. 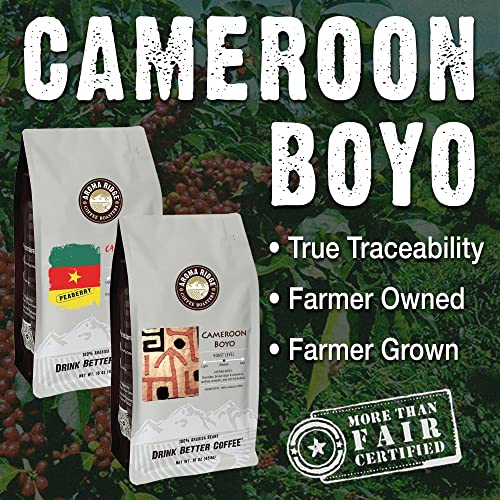 Arabica is not the predominant coffee grown in Cameroon – Robusta takes that title. They export a lot more of it, mostly to Portugal, Belgium, and France. It’s grown in Cameroon’s Western region, at medium altitude.

In 2014, the Cameroonian government set out a plan to reinvigorate its coffee-sector. They aimed to export 120,000 tons of Robusta and 35,000 tons of Arabica before 2020. Holy smokes, nearly quadruple the amount of Robusta to Arabica.

Cameroon’s Robusta season runs between December 1st to November 30th. The coffee has a rich full and nutty taste that’s ideal for blends.

Although Cameroon can boast an impressive output of regular Arabica and Robusta coffee, that’s not all it has up its sleeve: Cameroon Boyo coffee is its delicious, secret weapon.

The bean is grown in – you guessed it – the Boyo department of the Northwest Province in Cameroon.

Cameroon Boyo Coffee is grown alongside other crops which luckily minimizes the risk of infection of the crops and avoids the need for pesticides and herbicides!

The dedicated coffee farmers of the area work incredibly hard completing all the stages of the coffee farming process, which includes hulling, polishing, and grading the coffee. They ensure that only the beans that are the best of the best get chosen for export.

These farmers must double as magicians in their spare time because the taste of this unique Cameroon coffee is magical! A cup of this coffee is:

The area of Boyo is separated into four subdivisions. One of these four is Belo, a town and commune in which much of Boyo coffee beans end up, for washing and sorting.

In 2013, construction was started on a micro washing station by the Cameroon Boyo team, using only locally available materials and personnel. The design and setup of this washing station take into consideration the cultural and historic importance of the way to Cameroonian’s cultivate their crops.

Local farmers have the chance to bring their harvested coffee cherries to the Cameroon Boyo team to sell their product to other, local buyers. But, instead, they are encouraged to join with the team as a joint venture, which places these farmers on a much more professional level.

If local farmers cooperate in this business venture they have assured a set price for their coffee cherries, which is more consistent with the price paid by the roasters of their coffees. The work that the team and The Circle of Excellence (CoE) do in running the Belo Micro Washing Station is helping a lot of those working in coffee production.

Time For A Suggestion

Although Cameroon coffee is topnotch, it is not particularly easy to find some online. But we managed to snag one that looks great and that will get you the rich, delicious morning cup that you need. 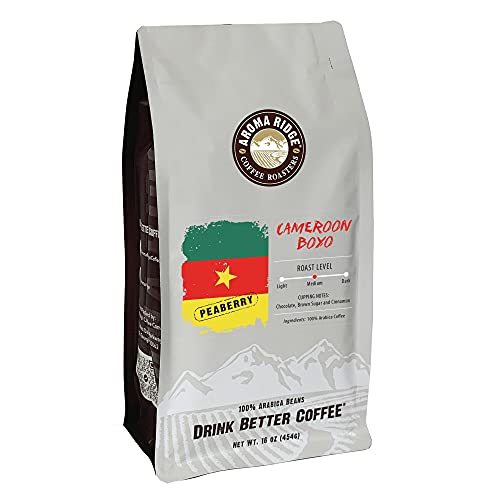 Aroma Ridge Cameroon Boyo Peaberry Coffee, Freshly Roasted in USA, Whole Bean, 16oz
Check Price on Amazon If you click this link and make a purchase, we earn a commission at no additional cost to you. Last Update: 2022-11-26

These freshly roasted beans from AromaRidge are grown in the Boyo region of Cameroon. The company prides itself on the bean’s full traceability back to the farmer-owned micro-lots where these delicious coffees are expertly handled.

What’s unique about this whole bean Cameroon coffee is that it is not made with a regular coffee bean, but rather a Peaberry. A Peaberry is the result of a natural mutation or defect inside the coffee cherry where one seed fails to pollinate. This allows the other to grow with lots more space, leading to one big, round bean.

Not only that, but its plumper shape means that it often roasts much more evenly than the beans of regular coffees.

Although not much research has been done on Peaberry coffees, it’s said that they offer:

Aroma Ridge’s whole bean Cameroon coffee is mellow and aromatic, with a rich full body. The full traceability of this Arabica coffee is a plus for us here at Roasty – being able to trace excellent coffee back to its source makes the coffee-sipping experience even better.

Cameroon, like other African countries, has an excellent product but is still trying hard to make a name for itself in the coffee world. The farmers on each of the wildly varied regions of the country are working diligently to get more of Cameroon coffee on the map.

Slowly but surely the Robusta and Arabica coffee of this beautiful, central-African country are making a name for itself, particularly with its Boyo beans and the supportive infrastructure of the Belo Micro Washing Station. Keep your eyes peeled for more Cameroon coffee, ‘cos it’s coming!

Oh and, as always, we wish you a great day and

How To Fold Chemex Filters

Can You Use Café Bustelo For French Press?