Tea and coffee have long competed for dominance in the world of hot drinks. Both have their merits, but is one truly better than the other?

What is Chai Tea? 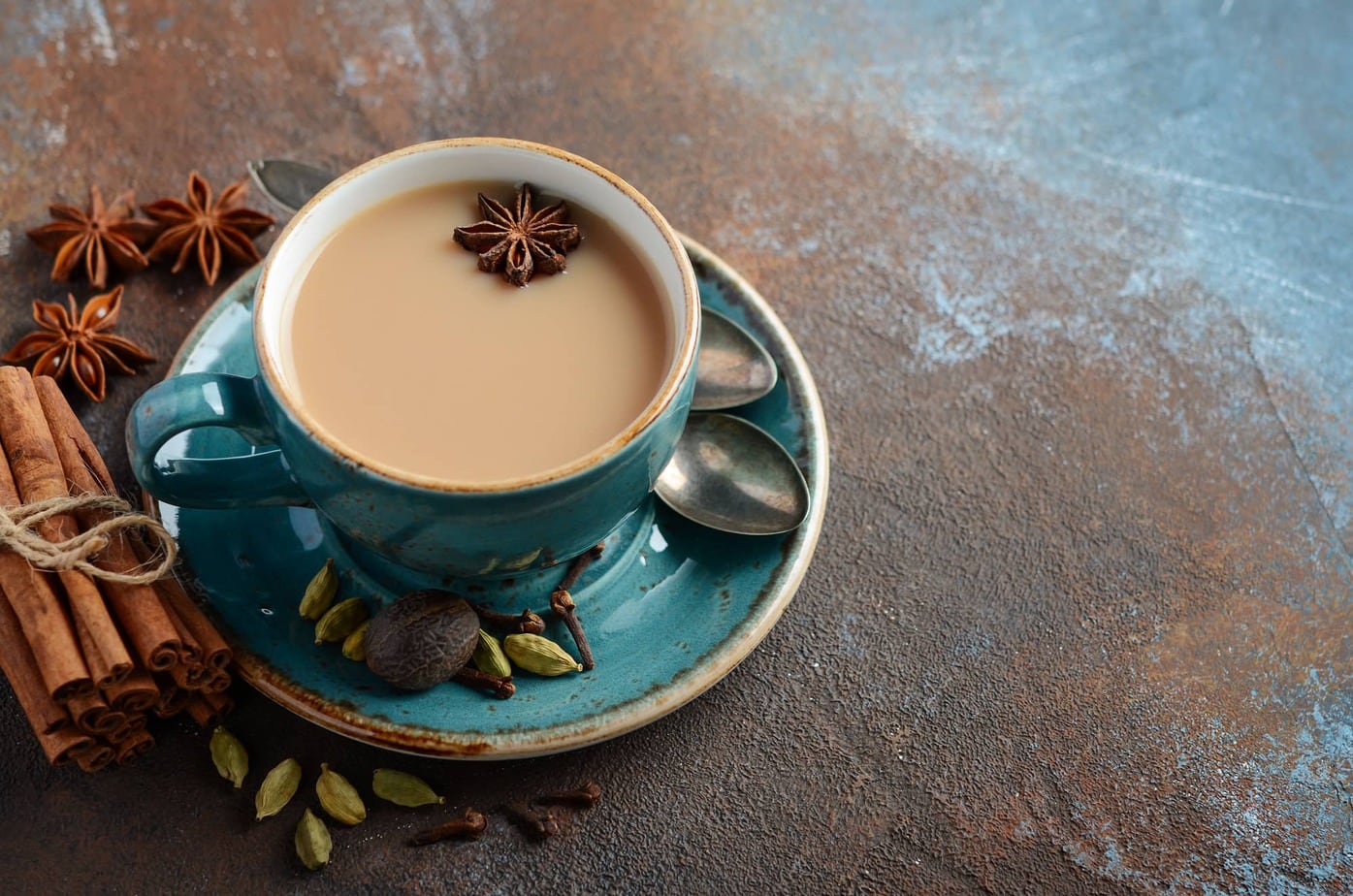 It’s worth briefly explaining what chai tea is to compare it with coffee better. While coffee beans are ubiquitous in North America, the exact nature of chai tea and how it differs from ordinary tea is less well known.

What Are the Ingredients in Chai Tea?

Unlike coffee, which is refreshingly uncomplicated in composition, chai tea has several parts to it.

While you can prepare chai tea in various ways, the standard, North American version of chai tea is sweet, milky black tea. Consequently, there are several ingredients in chai tea, including:

Typically, the base of chai tea is black tea. There are many themes and variations on which tea, but the most prevalent underpinning of chai tea is Assam. That’s because it’s a robust and long-in-the-mouth tea that holds its own against complex flavors.

On its own, Assam can be potent and prone to over-steeping. But combined with the spices, milk, and sugar added to chai, it creates a warm and flavorful drink perfect for a wintry afternoon.

There are also regional variations on chai tea. Kashmir, for instance, uses green tea as the base for its chai.

Less prevalent but still occasionally mixed in with chai tea are:

Nochai tea blend uses all these spices in one go. But when looking at the ingredient list for chai tea, you can expect to see several of these included.

Chai almost always features milk. Not all teas do because some flavored teas can be overwhelmed by milk’s taste and texture. However, in chai tea, the milk and sweetener help to heighten the flavors of individual spices.

For best results, tea sommeliers recommend using whole milk. Its richness is the perfect complement to some of the more potent spices.

When sweetening chai tea, it can take significantly more than the traditional one lump or two. The most common sweetener is white granulated sugar. But unrefined cane sugar is equally effective if more challenging to come by.

The popularity of Chai Tea Versus Coffee 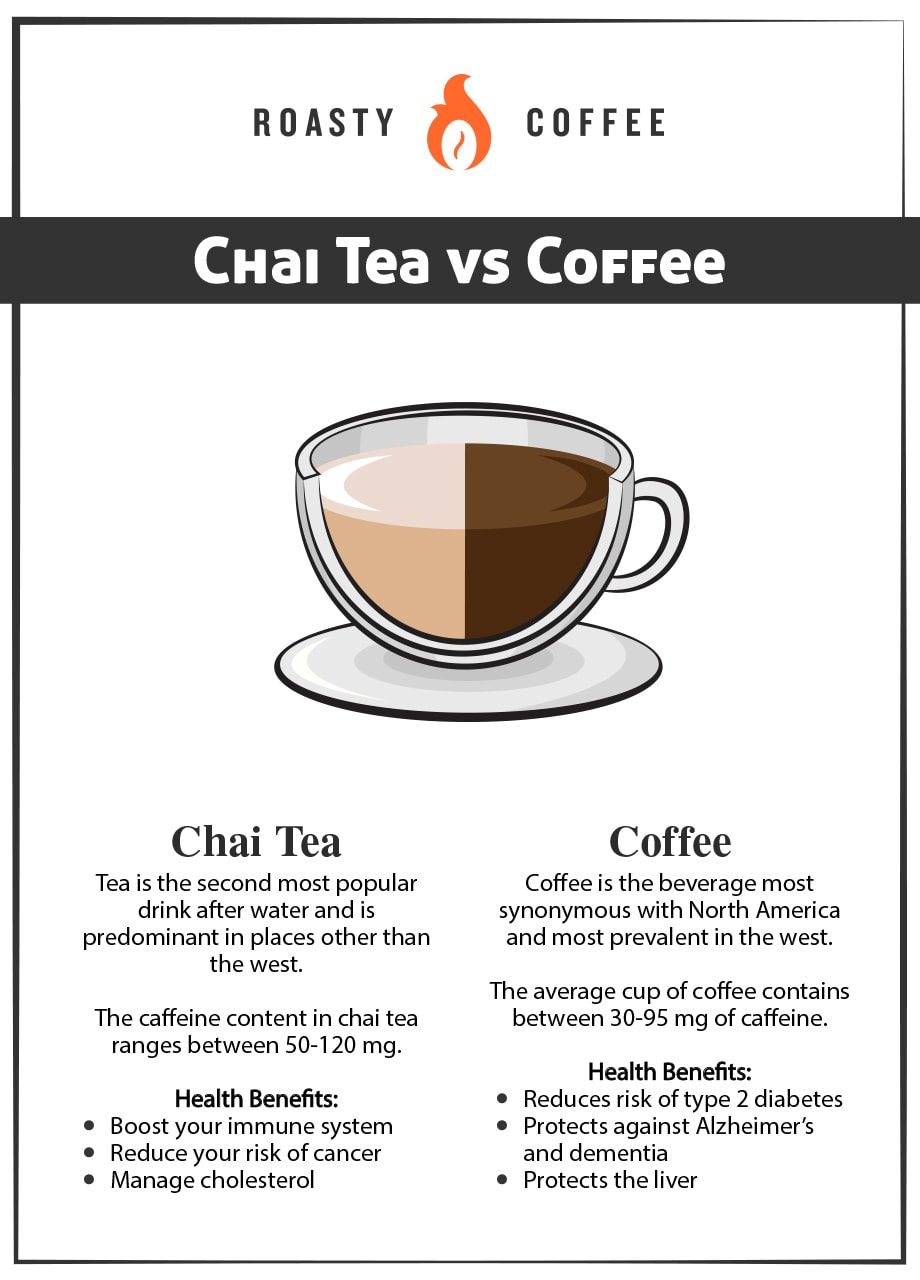 Coffee is the beverage most synonymous with North America. It wasn’t long ago you could find a Starbucks at almost every significant intersection. Even the pandemic hasn’t quashed people’s thirst for coffee, and door-to-door delivery ensures it’s as available as ever.

Perhaps surprisingly, tea is the second most popular drink after water. That said, how much people drink varies by region and culture. As a rule of thumb, coffee is significantly more prevalent in the west, while chai tea and other teas are predominant elsewhere.

In an increasingly fast-paced age, we rely on caffeine to get us through the day. A healthy dose of caffeine increases:

It can even boost the mood of the drinker.

There are many preconceived ideas about how much caffeine there is in chai tea versus coffee, but the fact is that various factors affect the caffeine level in both these drinks. These include:

Coffee’s caffeine content is also affected by the density and volume of beans. Likewise, the ratio of tea leaves to water will similarly affect the caffeine intake of a tea drinker.

It’s also true that different tea types have different caffeine levels, with black tea at the high end of the spectrum and herbal teas at the low end. When it comes to the caffeine content in chai tea, it ranges between 50-120 mg, whereas the average cup of coffee contains between 30-95 mg of caffeine.

The wide range is affected by your choice of chai preparation and steeping time. Crushed, broken tea leaves left to steep for 5-10 minutes naturally have a higher caffeine content than chai tea made from powder or syrup. That’s because they infuse faster than their unbroken, high-quality leaf counterparts.

But whether you favor chai tea or coffee, medical advice is not to exceed 400 mg of caffeine a day. Otherwise, you risk health problems.

But while too much caffeine might be ill-advised, there are promising benefits to drinking a cup of chai tea a day. It might not keep the doctor away, but it will:

Whatever the type, tea possesses antioxidants, albeit some teas boast more than others. Assam, the preferred base of chai tea, is exceptionally high in these. Antioxidants reduce oxidative stress in cells and, by extension, boost your immune system.

Reduce Your Risk of Cancer

Chai tea is spice-rich, and studies show that many of the spices used to flavor chai tea have a chemoprotective effect. While it won’t eradicate cancer, scientists believe it may lessen the likelihood of you developing cancer.

Black tea and certain spices can be beneficial in regulating cholesterol levels. Of particular help are:

Chai tea doesn’t use all these spices simultaneously. It combines them with black tea depending on the tea estate and seasoning preferences.

However, chai tea isn’t the only drink with health benefits. Surprisingly, coffee beans are a fruit, and they’re high in:

Type 2 diabetes affects your body’s ability to regulate insulin levels. However, coffee drinkers are 23-50% less likely to contract the disease than their non-coffee-drinking contemporaries.

Reduces Risk of Alzheimer’s and Dementia

Alzheimer’s is a degenerative cognitive condition that typically presents in adults 65 or over. It’s an inherited condition, but scientists are increasingly discovering that there are things you can do to lower your chances of developing the illness. One of these, it turns out, is drinking coffee.

Coffee drinkers are 65% less likely to present with Alzheimer’s than those that don’t. But tea drinkers shouldn’t worry; Tea is proving equally effective at protecting your brain.

Coffee also protects the liver from the side effects of various diseases.

Many liver illnesses lead to cirrhosis, which turns the liver into scar tissue. But scientists have found that people who drank up to four cups of coffee per day were 80% less likely to experience cirrhosis.

Which is better, chai tea or coffee?

As it turns out, it’s a matter of taste. While not precisely equal in caffeine content, cups of Chai tea and coffee both deliver a healthy kick to start your day. The difference is that a cup of coffee can jump-start you, while chai tea might feel more like a gentle, caffeinated hug.

What’s more, both chai tea and coffee have their sets of benefits, so there’s plenty of arguments backing up your choice of drink.

Related: The Pros & Cons of Coffee

Some fans of coffee start the day with a cup and finish it with chai tea to lower their coffee intake and relax at the end of it. But there are no rules here. Put the kettle on, prepare your drink of choice and enjoy.

How To Descale A Breville Espresso Machine

Bitter vs Sour Coffee: Why It Happens and How To Fix It!

Nespresso Creatista Uno vs. Plus: Which Model Is Better?