What is a Frappé? We’ve Got Answers; It’s Not a Trappé!

Ah, the frappé — one of the most delicious cold coffee drinks you can buy. At least, it is in our opinion. Downing one (or, let’s be honest, two) of these on a sweltering day hits the spot better than any hot beverage could, but if you’re not as big of a frappé fanatic as we are, you may have a few questions.

Is it a milkshake? Does it have vanilla ice cream in it? Is it the same as a Frappuccino? Despite being on the menu of countless coffee shops, does the popular drink even contain any coffee?

Like many aspects of the coffee industry, this versatile treat can be a bit confusing, but you’re in luck, Roasty reader; we’re here to give you all the info you could possibly need about this popular coffee beverage. 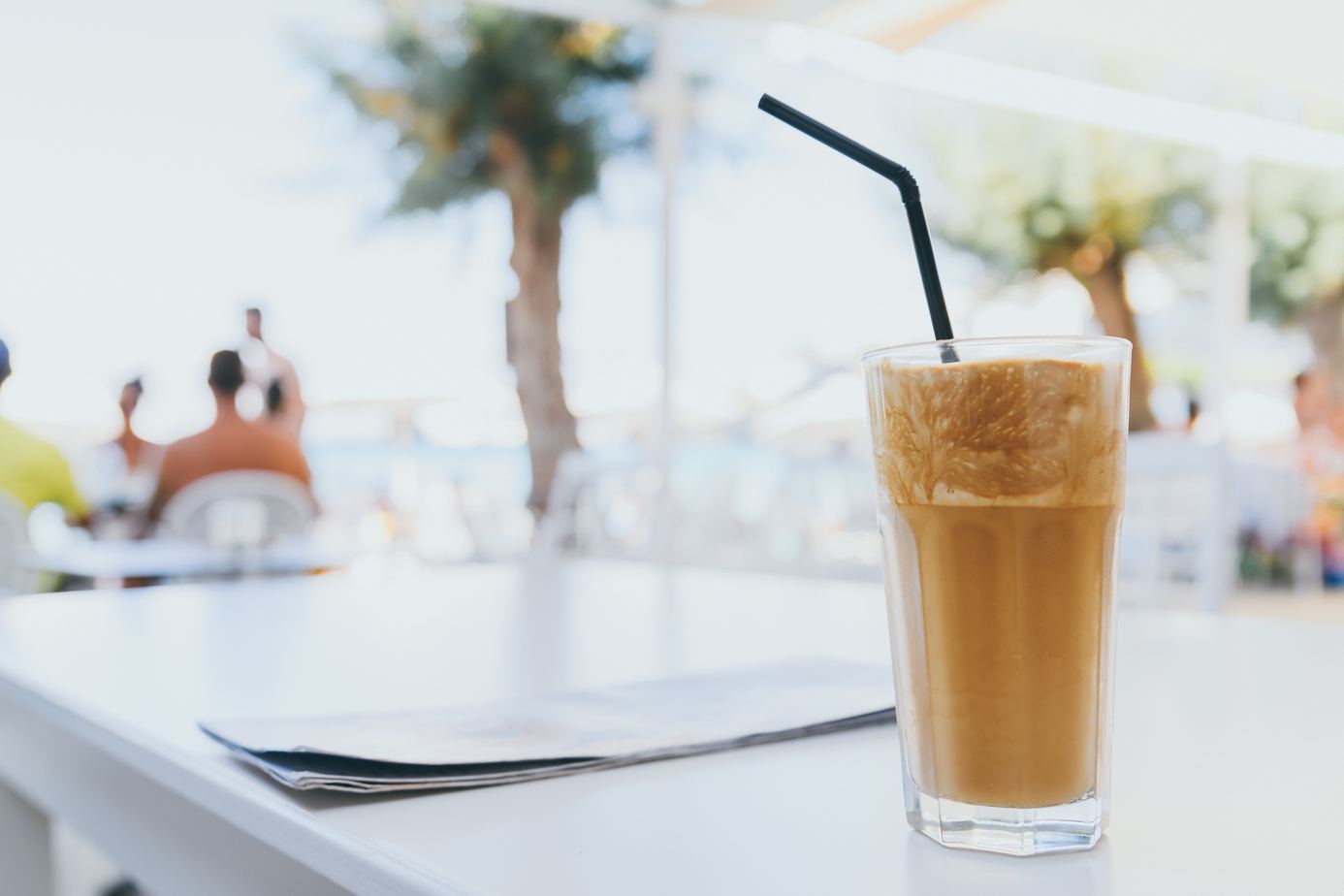 Let’s take it from the top, shall we? We’re taking it back to the 1957 Thessaloniki International Fair when Dimitris Vakondios invented the iced coffee drink many know and love today.

The Nestle employee poured cold water and instant coffee granules into a shaker, and, after a few moments of vigorous shaking, Vakondios was left with a frothy coffee concoction.

Vakondios probably had hopes that the refreshing drink he’d created would hit the spot at the fair, but little did he know its reach would span much farther than the single event.

Pretty soon, almost everyone in Greece was sipping the frappé on their coffee break, and by 1979, it had become the country’s national coffee drink.

Once tourists tasted the Greek version of the blended drink for themselves, frappé recipes and variations of the drink started popping up around the globe. It was official: the frappé was everywhere, and it was giving the classic cup of hot coffee a run for its money.

Though Vakondios’s efforts marked the birth of the versatile coffee drink, it wasn’t the first time the term “frappé” or “café frappé” had been used. The word, which means “shaken” or “stirred,” had been used since the 19th century to describe many frozen coffee drinks.

For the sake of keeping things clear, though, when we discuss how to make a frappé, we’re talking about Vakondios’s version.

Remember that our recipe is just a basic guideline, so don’t let us limit you, dear coffee lover; you should feel free to adjust this coffee slushie recipe as you see fit. After all, the simplicity of this refreshing frozen drink allows plenty of room for experimentation!

All right, we won’t keep you waiting any longer. Here’s everything you’ll need to make a traditional frappé!

As we’ve already mentioned a time or two, several different frappé recipes are floating around. The differences usually center around how much sugar or milk is added to the shaker.

Traditional frappés are served in one of three manners, each of them varying by degrees of sweetness.

Glykós is the sweetest option, made with four teaspoons of sugar. Skétos is the choice beverage among coffee drinkers who prefer things to be a bit more plain; no sugar is added to the shaker for this one. Métrios and its two teaspoons of sugar fall in the middle of the frappé spectrum, making this version of the drink a perfect pick for someone who only wants a small taste of sweetness.

Sometimes, frappé lovers mix the drink’s instant coffee base with milk or evaporated milk, resulting in a version of the beverage called a frapógalo.

Milk can even be used in place of the water, resulting in a creamier cup. And for more flavorful frappé drinks, use a splash of chocolate milk instead.

We mentioned above that you usually make this drink with water. If you want to add a bit of creaminess or create a thicker texture, you might add milk. In some of the world’s frappé recipes, though, you won’t find either of these ingredients in your cup.

In Bulgaria, for example, it’s popular to make the frappé with Coca-Cola, but in Serbia, you might see people add a scoop of ice cream to the mix. When an extra kick is necessary and strong coffee won’t quite cut it, some might add coffee liqueur, like Kahlua, for an extra edge.

The traditional recipe calls for a couple of teaspoons of instant joe. But, nowadays, many coffee shops outside of Greece make something with a stronger and more intense coffee flavor by subbing in a shot of espresso coffee.

In the espresso-infused modern version, a double espresso shot and white sugar are added to a shaker filled two-thirds of the way with ice. This concoction is shaken until the frappé’s distinctive foam appears on top.

Clearing Up Some Confusion

Now, our friend, the frappé, is often mistaken for other blended or iced coffee drinks on the menus at coffee houses across the globe. So, now that you know what a real frappé is let’s dig a bit deeper into what it is not.

Pronounced “frap” instead of “frap-pay,” this beverage more closely resembles a milkshake. Typically, milkshakes made in this region don’t have ice cream. However, when a scoop of the sweet and creamy dessert is added to the mix, it becomes a frappe.

Coffee isn’t a necessary ingredient in this Boston-born drink unless you order it in Rhode Island. There, the drink, which is called a cabinet, includes coffee syrup.

The Frappuccino coffee drink is a mixture of the Boston frappe and the classic cappuccino, and aside from being delicious, it has almost nothing in common with the Grecian frappé.

A Frappuccino is a blended mixture of espresso, ice cubes, milk, sugar, and flavored syrups topped with a sweet dollop of whipped cream.

You probably won’t find the word “Frappuccino” written on the menu at your favorite coffee shop unless it’s the Seattle-based coffee chain, Starbucks, as the popular franchise owns the term. You might, however, find similar frozen drinks at the local café; they’ll just have different names.

As you can see, the frappé is a versatile drink that lends itself well to tinkering and experimentation, able to meet the needs of serious and casual coffee drinkers alike. So, if you’re looking for an easy summer drink you can tailor to your tastes, the Grecian frappé might be perfect for you.

You probably won’t find the authentic iced beverage at the nearest coffee shop or in grocery stores, so we recommend whipping it up at home if you want to try it. Enjoy the recipe as is, or add something extra — chocolate syrup, for example — for a twist. If you’re feeling extra adventurous, channel the Bulgarian baristas and add Coca-Cola!

How to Make An Original Irish Coffee: Step-By-Step Recipe

How To Make Espresso With Keurig: The Surprising Answer!