How To Fold Chemex Filters

People often overlook the filter in the coffee-making process. Warming the coffee maker, measuring the grounds, and slowly pouring the hot water are important parts of the Chemex pour-over process.

Buying pre-folded filters saves time, but have you ever wondered how to fold Chemex filters yourself? It’s so simple and gives you even more control over your coffee making.

Let’s take a moment to look at the Chemex filter itself.

Original bonded Chemex filters, whether pre-folded or unfolded, are made from a heavier paper than traditional coffee filters and are either oxygen-washed white, a bleach alternative, or the natural, unprocessed form comes in a light brown color.

How to Fold a Chemex Filter

You can make Chemex coffee with any of the shapes, and each requires a slightly different fold.

Many coffee lovers attest to enjoying their cup of coffee more when they fold their coffee filter because it becomes a part of the coffee ritual, like warming the brewer and slowly pouring the water. 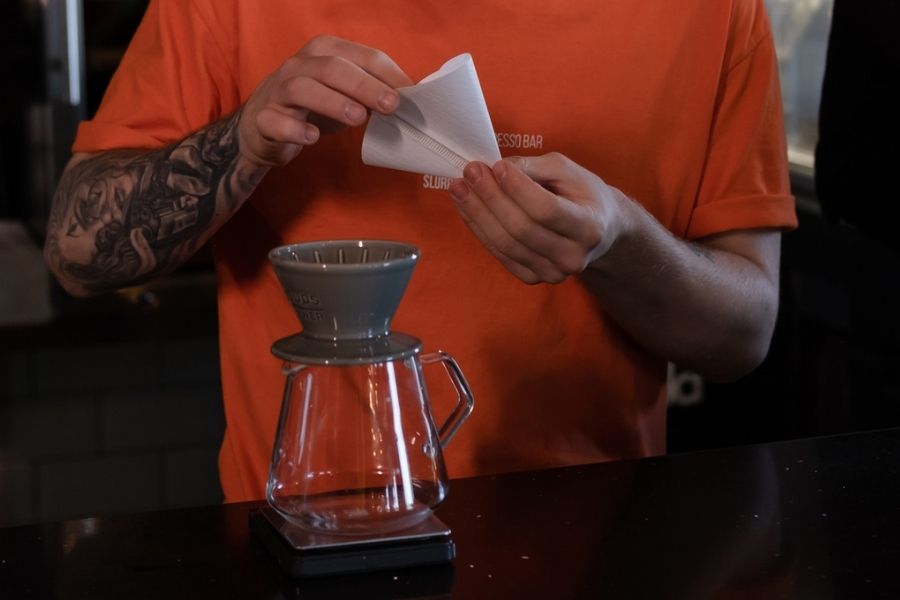 Folding the half-moon is very similar to the circle shape filter with fewer steps. The difference is the tab that you must fold up.

The traditional square filter comes folded in quarters in a shape that will look very familiar if you’ve folded either the circle shape filter or the half-moon shape.

Coffee lovers value this shape because of how easy it is to pull out the filter. The extra paper on the sides provides little handles to pick it up for easy disposal of the wet filter and spent coffee grounds.

If you’ve ordered Chemex coffee at a coffee shop and watched them prepare it, you’ll see the filters are folded differently than the traditional square method.

Here is how the baristas do it. It’s a little more complicated, but some say it gives a more balanced extraction from the ground coffee because no side of the filter is thicker than the others.

We suggest practicing this fold with a piece of paper before folding a filter.

Folding Chemex filters can be very simple or complicated depending on which method you choose, just like pour-over methods. Take time to experiment and try new things and search for that perfect cup of morning coffee.

If Chemex isn’t suitable for you or you want to try something else that involves a similar method, we compared Chemex with other pour-over methods.

Sun Brewed Coffee: How To Make Your Own

Coffee vs. Soda: The Difference With Caffeine, Acidity, And More

What Is An Americano?