Have you ever looked at a cup of hot coffee and a scoop of rich vanilla ice cream and wondered how they’d taste together? If so, you’re in good company. People have been enjoying scoops of vanilla ice cream in coffee for centuries. In Italy, it’s called affogato al caffe.

Unlike most coffee drinks, it’s considered a dessert rather than a breakfast beverage. In Italy, it is usually consumed after a meal as a combination of dessert and coffee course. The word affogato translates as “drowned,” referring to the practice of “drowning” the ice cream in the espresso.

In this article, we’ll teach you how to make this sweet coffee treat as well as some variations of the Italian classic at home.

How to Make Affogato Al Caffe

The basic recipe for affogato is pretty simple. All you need is a scoop of ice cream or gelato and a single shot of espresso. Put the ice cream in a chilled glass and pour the hot espresso over the top.

A chilled glass is usually used for a specific reason. The goal is to make the coffee run down the creamy vanilla ice cream and pool around it, so they mingle together — not just have it melt immediately into a warm coffee milkshake type of drink. A cold glass can help reduce melting and achieve the desired effect.

Some people top their affogato with cream and chocolate syrup to finish it off.

In Italy, affogato al caffe is pretty basic. It is made with two main ingredients: a single shot of espresso and a scoop of vanilla ice cream or gelato. But of course, as food travels, people put their own spin on it.

Purists will say that changing the original recipe is sacrilege. If you prefer the original, that is completely fine! However, many people find a variation that they love. This can vary from country to country and cafe to cafe.

These days, you’ll find different variations of coffee and ice cream in cafes near you. Here are some great variations on the dessert drink, most of which you can make at home.

It might not be the best choice for your average weekday morning, but many variations of affogato use liquor to take it up a notch.

This essentially creates a coffee-based, alcoholic milkshake if you allow it to melt enough. There are many types of liquors added to these variations. Some popular choices include Kahlua and Bailey’s.

The traditional alcoholic version in Italy is made with grappa, which is a grape-based brandy. However, more familiar combinations include whiskey and rum. 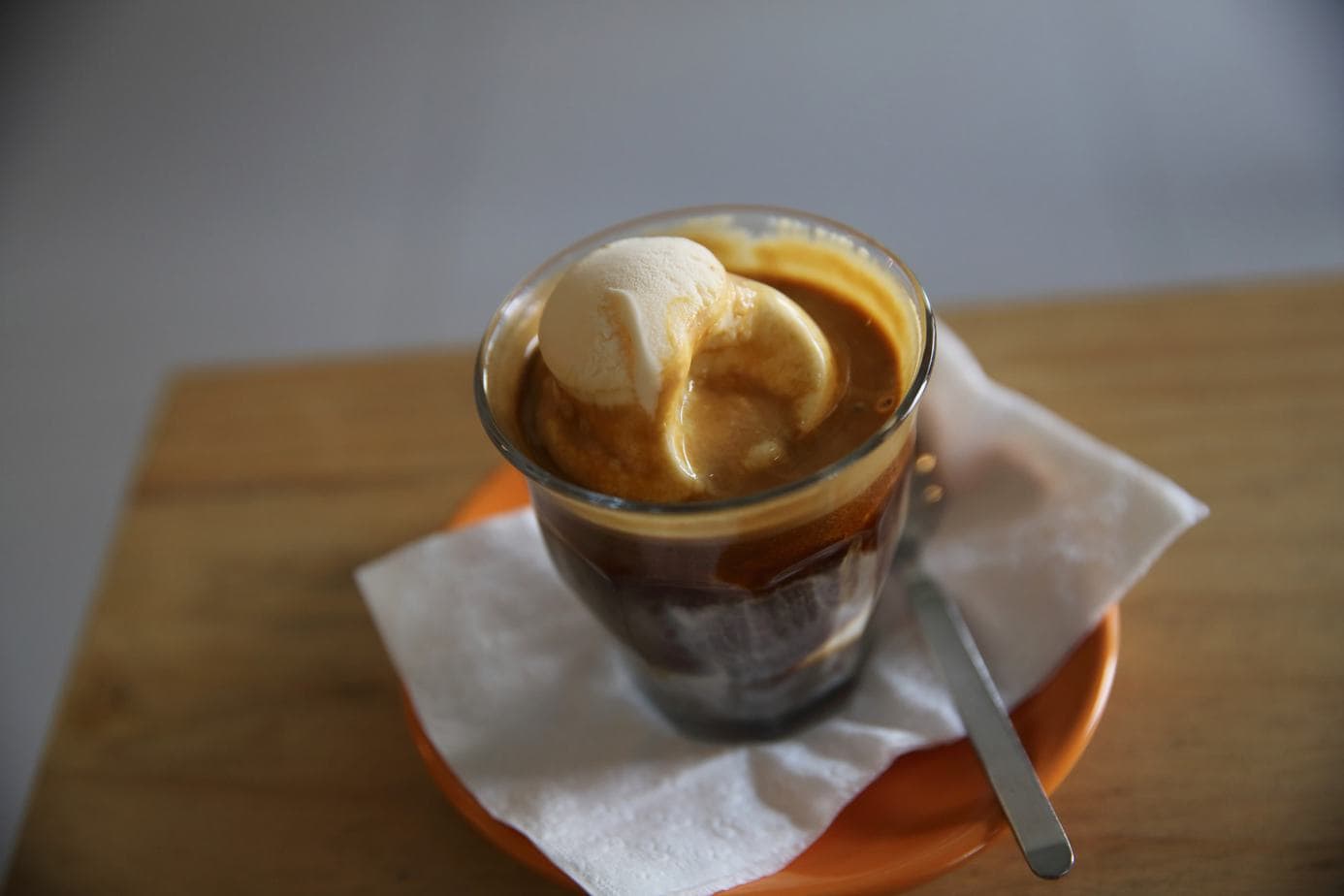 Variations on affogato exist throughout Europe and South America. Many of these use alternative ice cream flavors in place of vanilla to add a new twist. Popular ice cream flavors include coconut and other fruity ice creams that offer a brighter taste profile.

Some people also add fruit, like coconut flakes, whole berries, and more, to a traditional affogato. 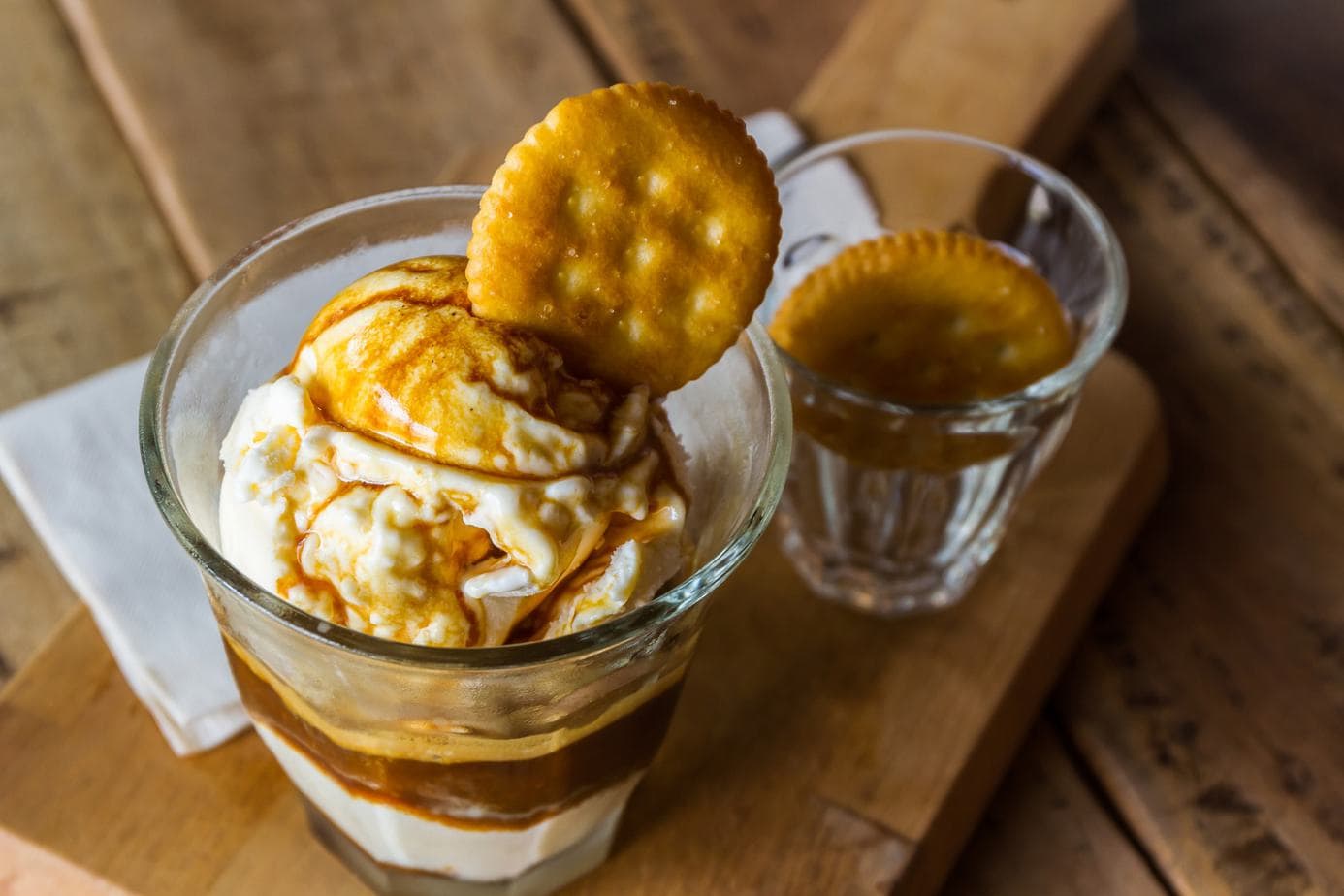 Some people enjoy adding biscotti or other mildly sweet biscuits to the affogato, either alongside it or in the drink itself. These add-ons make the beverage much more dessert-like and enhance the sweetness of the ice cream.

There are also options for adding a range of toppings, including chocolate or caramel syrup, whipped cream, and other ingredients that bring the dish into ice cream sundae territory.

If the Italian terms make your head spin, don’t worry. This is simply another way to say that you can increase the strength of the coffee in affogato al caffe. Some people prefer to up the amount of caffeine with a ristretto, or double shot, of espresso.

This, in addition to increasing the caffeine content, also adds more liquid, turning it into more of a beverage than a simple ice cream dish.

How to Consume Affogato

Since affogato is more dessert than coffee, it is usually eaten with a spoon. It is not possible to drink it unless you completely melt the ice cream. This isn’t the goal of affogato — the ratio should be more ice cream to less coffee, not vice versa.

Since it doesn’t melt right away, it is usually eaten like a dessert, not drunk like a beverage.

However, this depends on several factors, including the ratio of coffee to ice cream. If there is enough liquid, there is no reason why you can’t drink the affogato with a straw.

Are There Other Ways to Put Ice Cream in Coffee?

It should come as no surprise that affogato is not the only way to put ice cream in coffee. After all, you can’t go wrong with such a classic combination.

If affogato isn’t for you, try one of these other ways to combine these delicious ingredients.

Most iced coffee recipes use some combination of coffee or instant coffee powder, sweetener, milk, and crushed ice to achieve the result. However, you can also use ice cream to put a fun twist on the classic iced coffee recipe.

You’ll need to melt the ice cream a bit to get the desired consistency. One way to do this is to combine it with the coffee while it is still piping hot. This will help it melt down slightly and achieve the super creamy, melted consistency you’re going for.

You’ve probably ordered a coffee milkshake before under its other name, frappe. Usually, a frappe is made with a shot of espresso or instant coffee, cream, ice, and syrup. The milkshake consistency is achieved by processing these ingredients in a blender.

So get out your coffee machine and brew up a batch of your favorite coffee – use Espresso coffee grounds for the most authentic taste! Pour it over ice cream, and BAM! You’re trendy! Your friends will love it and you. You can either enjoy the classic recipe, try a variation, or experiment with combinations of your own.

7 Things You Can Do With Leftover Coffee

Pros And Cons Of Coffee

What is a Macchiato?