If you are a caffeine aficionado who loves a deliciously strong cup of coffee in the morning but aren’t sure whether you prefer an iced americano or an iced coffee drink when the weather turns warm, we’ve got the perfect in-depth guide for you.

From the origin of americanos to the perfect iced coffee recipes, continue our guide below to learn more about iced americanos, iced coffee, and the differences between them. 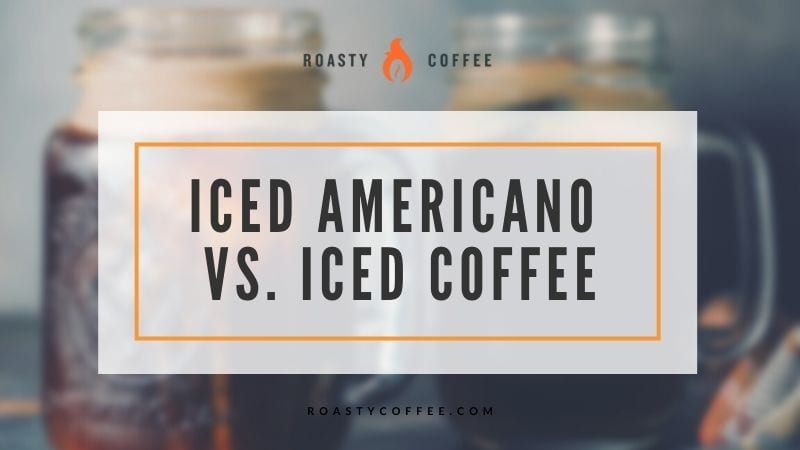 All About Iced Americanos

Americanos are among the most popular coffee beverages in the United States. An iced americano, though it may seem different than a regular americano, is really just an americano over ice instead of served hot — hence, the iced version of an americano.

The method of making an americano is fairly straightforward: a barista or at-home coffee brewer usually pours two shots of espresso into hot water.

Then, they add cold milk, cream, sugar, flavoring, or syrup of choice to their preference. Traditionally, however, americanos are supposed to be served black without any additions.

For an iced americano, the barista pours two espresso shots into cold or room-temperature water and adds the mixture to an ice-filled glass, leaving you with a tasty, cold coffee drink for a warm day.

There are a few different theories regarding the origins of the americano. One tells the story of American soldiers stationed in Italy during World War II.

The soldiers weren’t accustomed to the method Italians used to drink coffee. They wanted large cups of what they considered regular coffee, but traditionally, Italians drank a single espresso shot, served in a shot glass.

Additionally, the American soldiers couldn’t acclimate to the bitter taste of Italian espresso, and they began adding hot water to dilute it.

Eventually, this became the standard process for Americans abroad who were unused to Italian coffee habits.

When the Americans wanted a stronger, more concentrated coffee, they would simply add an extra shot of espresso to their drink.

This choice earned the beverage the name, “americano.”

Another theory is that americanos originated as a French and Italian joke about how Americans prefer watered-down coffee.

Whenever the French or Italians added water to the coffee beverage, they called it an americano to poke fun at American coffee.

In either case, the americano has become one of the most popular versions of coffee in America since its creation.

How to Make a Delicious Iced Americano

Iced americanos are a simple and quick beverage nearly anyone can make at home as long as they have an espresso machine. To make a delicious iced americano, you will need the following ingredients:

Once you have gathered your ingredients, you can make your americano by following the process below:

Step 2: Grind your espresso beans in your coffee grinder until the coffee grounds are a smooth powder, not granular

Step 3: Brew two shots of espresso, or one double shot if your machine has the option for it

Step 4: Fill a nice glass with cold spring or filtered water. Remember to only add around 50ml of water per every two espresso shots — an incorrect coffee to water ratio will dilute the flavor too much

Step 5: Add ice to the glass until it is almost completely full

Step 6: Pour your espresso shots on top of the ice

Step 7: Use your spoon to gently mix the beverage until it all appears to be one color

Step 8: Add cream and sugar only if necessary to preference

Iced coffee is enjoyed by coffee lovers across the world. Its strong taste, cool and refreshing temperature, and tasty aroma have won over the hearts of many as a popular warm-weather drink.

Made from the simple combination of black coffee, ice, and the option of adding a bit of creamer or sugar, this drink can be customized to match nearly every flavor preference.

The americano is still considered the most popular iced caffeinated beverage option, but iced coffee comes in at a close second.

And while iced americanos are said to have originated in Italy or France around the time of World War II, iced coffee has a different origin story.

The original iced coffee recipe is said to have come from French Algeria in 1840. Based on an Algerian drink called Mazagran.

Made from cold water, cane sugar, and coffee syrup, Mazagran was commonly consumed by the French soldiers stationed in Algeria who created it.

Iced coffee is slightly more challenging to make than an iced americano, but can also be seamlessly made at home with the proper tools and ingredients.

To make your at-home iced coffee, you need the following:

To start your iced coffee, make sure you give yourself at least an hour and take the following steps:

Step 1: Measure a few scoops of coffee beans into your grinder

Step 3: Brew your ground coffee until you have one cup of coffee (8 ounces) available for a small serving

Step 4: Fill your glass with ice

Step 5: Wait for your coffee to cool to room temperature

Step 6: Pour your brewed coffee over the ice

Step 7: Add more ice if needed to fill the glass

Step 8: Option to add sugar, milk, and flavoring, and stir with your spoon

However different they may be, these cold coffee options also have a range of similarities, such as:

An iced americano and iced coffee will most likely always have a caffeine content difference. Though iced americanos contain water, adding water to a caffeinated beverage doesn’t change the actual amount of caffeine it contains.

The caffeine in iced americanos, however, takes longer to enter the system due to dilution compared to an iced coffee that has not been diluted.

Each shot subsequently adds an additional 68mg of caffeine for a compounding effect.

With iced coffee, however, the caffeine content depends heavily on how much coffee you use per 8 ounces of beverage, and which coffee brewing technique you choose.

The third most popular iced cafe beverage is an iced latte. The main difference between iced americanos, iced coffees, and iced lattes is the milk content.

An iced latte replaces the water content of the americano, instead of adding milk or a non-dairy milk alternative of the drinker’s choice.

Similar to iced coffee, iced lattes are often sweetened with various flavors or topped with additions like cinnamon or whipped cream.

Whether you are looking for a cool milk beverage to enjoy throughout the last days of summer or want to try making your own iced coffee at home for the first time, these deliciously cold drinks offer something for everyone.

Mix it up by adding extra espresso shots, or put some vanilla in your iced coffee for a twist. Your taste buds will thank you.

How to Make a Latte Without an Espresso Machine

How To Make a Latte With Keurig K-Cups: Recipes and Tips