The advent of the single-serve coffee maker was a game-changer for many coffee drinkers. Suddenly, there were dozens of coffee varieties available from popular coffee brands: a house blend to kick off your morning right, then you could switch gears with a vanilla cappuccino for your second cup of coffee. Could life get any better?

Let’s break down the two options and see how they compare! 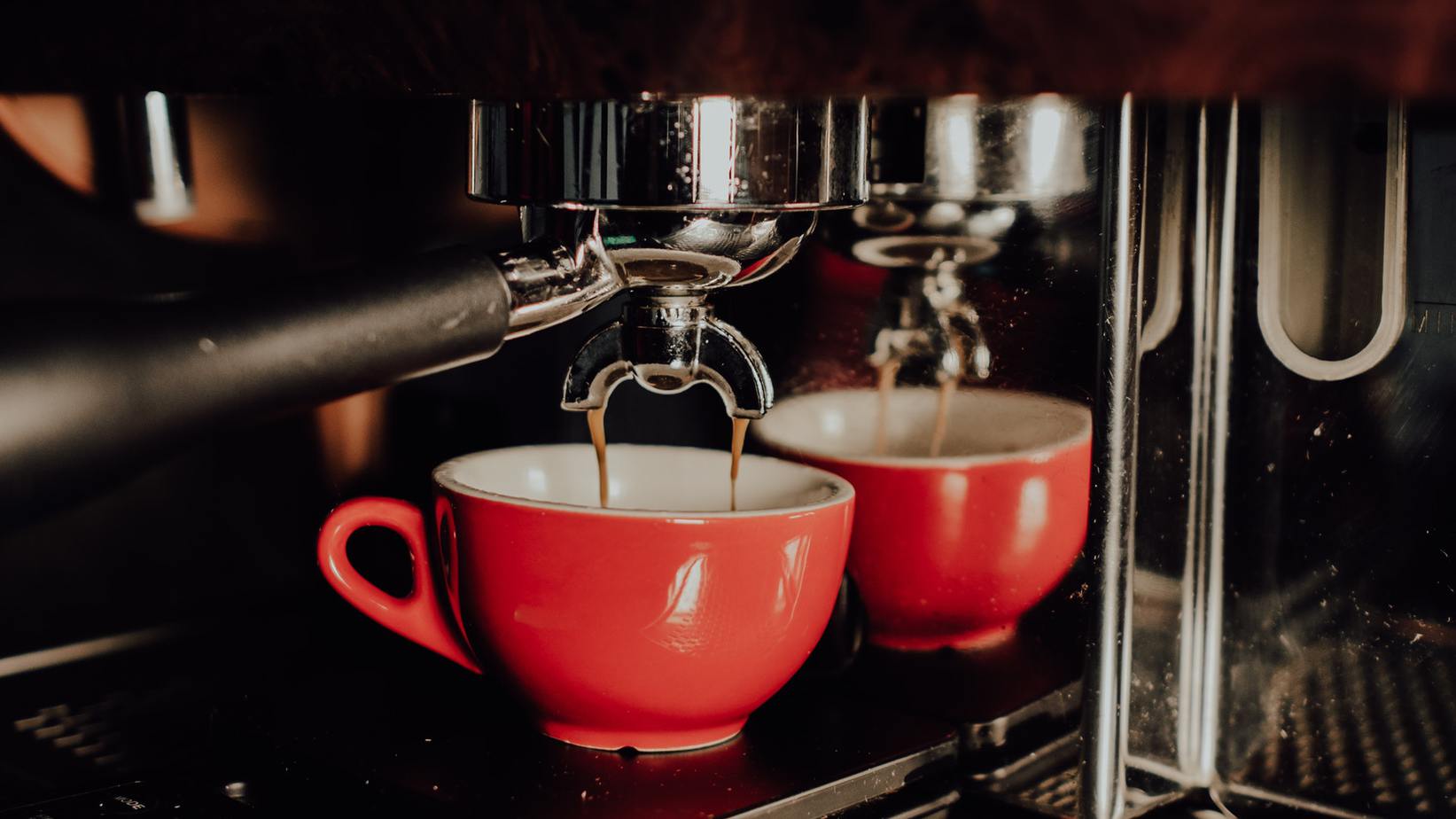 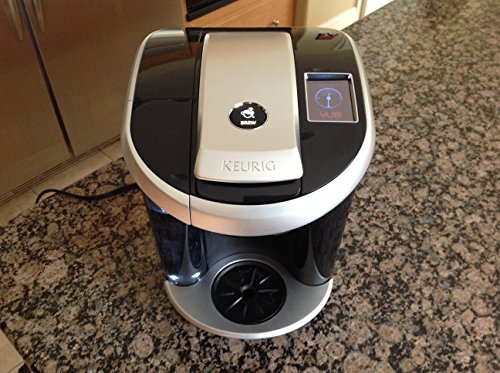 Keurig 2700 Keurig® Vue® V700 Single serve coffee system, 1, Black/silver
Check Price on Amazon If you click this link and make a purchase, we earn a commission at no additional cost to you. Last Update: 2022-01-18

The Keurig Vue debuted in 2012 as an update to the original Keurig machine. Unlike its predecessor, the new Vue accommodated travel mugs and used larger, recyclable coffee capsules.

Keurig Vue Packs use one layer of plastic, specifically #5 plastic, which allows them to be recycled, reducing the growing concerns over coffee pod waste. The larger, wider pod, combined with an updated brewing system, reduced the chances of cracks and breaks.

Part of the appeal of a single-serve coffee brewer is being able to quickly grab a cup to go. Of course, pouring a mug or two into a larger travel-ready vessel isn’t always the neatest experience, especially when the brewers were only meant to accommodate small cups of coffee. Keurig attempted to remedy this situation by making the Vue larger — enough to handle travel mugs up to 18 ounces.

Creates a Coffeehouse Experience at Home

Keurig pulled this off with the introduction of a two-pod system. Now, you could combine your usual Vue Pack coffee with a dry milk Vue Pack, then hit the appropriate brew button. In minutes, you’d have a fancy, café-style fresh coffee in your hands!

To be fair, it probably doesn’t rival your local coffeehouse’s custom-crafted drinks, but it can be a refreshing break from your regular coffee.

Though the Keurig Vue boasts some impressive features, the machine and the Vue Packs cost a bit more than traditional K-Cups. Since the Vue only takes Vue Packs and needs dry milk pods to make café drinks, it can become a costly venture.

Sadly, the Keurig Vue didn’t perform as well as expected, so the company discontinued the machines. You can still find Keurig Vues on various online platforms, but the Vue Packs aren’t as easy to come by.

If you already have a Keurig Vue and struggle with finding Vue Packs, you may want to consider picking up a K2V adapter so that you can use some other coffee pods. 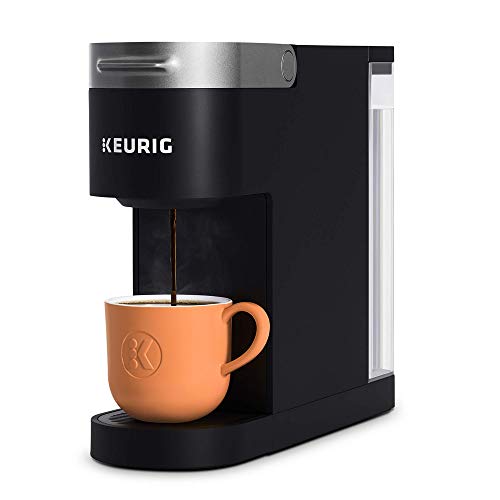 Keurig K-Slim Coffee Maker, Single Serve K-Cup Pod Coffee Brewer, 8 to 12 oz. Brew Sizes, Black
Check Price on Amazon If you click this link and make a purchase, we earn a commission at no additional cost to you. Last Update: 2022-01-19

K-Cups may be the most prolific single-serve pod globally, or at least the most well-known. They let you make a variety of drinks, including tea, hot chocolate, and apple cider. Plus, Keurig recently announced that you can recycle all K-Cup pods.

K-Cups seem to be everywhere, and you can find some incredible deals on them. Buy them online and have them shipped to your house or office, join a subscription service, or swing by the local grocery store to pick up a box.

While you won’t get a frothy vanilla latte, Keurig partnered with some of the top coffee brands to bring you a wide variety of options, so there’s something for everyone. You can even pick up sample boxes that allow you to compare flavors and determine which K-Cups are best!

As we reported, Vue Packs only work in Vue coffee makers, but you can use K-Cups in all other Keurig models. Maybe you have a Keurig Mini at home but a Keurig K-lite at the office.

Fortunately, the benefit of standard K-Cups is that you don’t have to double-buy your favorite coffee pods — K-Cups work with both machines.

Plus, Keurig offers reusable K-Cups that you can fill with any coffee grounds you have. Opting for a reusable K-Cup can save you even more money, and it’s also better for the environment.

Several Keurig machines cost less than the Vue, and the coffee pods follow suit. You typically get more K-Cups in a box, and it’s relatively easy to find deals to drop your cost further.

K-Cups are smaller than Vue Packs, so you can expect a weaker brew. Plus, you can’t adjust the temperature or brew strength like you can with the Vue. While K-Cups are easier to use, you do lose some power to customize your brew.

Keurig became a household name and kicked open a door we never knew we needed, and now we have more single-cup choices than we know what to do with! That said, you have to decide which Keurig system works best for you, and that isn’t easy.

Purchasing a Keurig Vue cost more than a standard Keurig K-Cup brewer when the machine first debuted, and that hasn’t changed. Since Keurig discontinued the Vue, it’s difficult to find one, and the Vue Packs are even rarer. That means both the machine and the coffee pods cost more than K-Cups.

Even if you choose a higher-end K-Cup compatible machine, like the K460 or K560 that costs more, you get some high-end features that overlap with the Vue’s.

While Keurig developed new models with more variety, they generally don’t handle travel mugs. Only a few machines can take a 14-ounce mug, and the K-Cups only come in one size, meaning that a larger cup means weaker coffee, even if you use the most robust pods.

The Keurig Vue has a stunning digital control panel that’s easy to use and offers more brew choice options. Thanks to the larger coffee pods, you even get a stronger coffee flavor. And, using dual pods, you can craft some drinks that mimic a café experience with a fraction of the effort.

On the flip side, K-Cups are easy to use: just pop the pod and hit a button. They work with various Keurig machines, so you can choose the K-Cup that works best for your needs. There’s even a Keurig machine that allows you to make lattes, cappuccinos, and, you guessed it, good ol’ fashioned K-Cups.

The Keurig Vue means a stronger brew, recyclable pods, and more control over your brewing experience. You can even make coffeehouse-style drinks with a frothy foam using the dry milk Vue Packs. However, since Keurig discontinued the Vue, finding Vue Packs is challenging.

Conversely, K-Cups are easy to find, and you have plenty of options to choose from, including flavored coffees and teas. K-Cups cost less than the rarer Vue Packs, and you can opt for a reusable K-Cup that takes any ground coffee.

If you prefer having greater control over your brewing experience and rarely use a single-cup maker, then the Keurig Vue may be a good choice. However, if you brew daily or use different Keurig machines, the K-Cups offer a superior experience.

Flair Espresso Review: The Full Flair Without the Fuss

The Best Coffee Scale For You: Weighing the Options