Laos is the only landlocked country in Southeast Asia, nestled between China, Cambodia, Vietnam, and Thailand. After a long period of economic and cultural growth, its internal conflicts, recolonization, and civil war caused it to lose much of its influence and power.

During this dark period in Laos’s history, coffee production was largely abandoned, even though it was a highly lucrative crop. In recent years, the coffee industry in Laos has started to turn this around: their coffee exports grew from $50 million in 2016 to $75 million to 2017. The industry is growing rapidly and we couldn’t be happier about it.

Excuse us for a second or two while we wax lyrical about the great coffee of Laos.

First, A Bit Of History

The history of coffee in Laos dates back to around 1915. French colonists brought the crop over to Laos and at first attempted to grow it in the North before realizing that the climate was much more preferable in the South.

Southern Laos is the home of the Bolaven plateau, which has incredibly fertile soil at high altitudes which are perfect for coffee production (but more on that later).

At the outbreak of World War II, many of the French colonies in Laos had to leave the country. Coffee production as a result largely came to a halt. Before this, they found success in the mid-1930s, with annual production reaching 5,000 tons.

Not An Easy Road

Not long after, many of the coffee trees died in the Great Frost of 1949 and from orange rust disease. This is a parasitic fungus that appears on the plants as orange, powdery dust that eventually makes the leaves, flowers, and cherries of the coffee trees fall off, ruining the harvest.

Years later, during the Vietnam War from 1964-1973, the United States dropped more bombs on Laos than it used in used during the entirety of World War II. Large areas of Laos were then left unusable for farming. To this day, Lao farmers cultivate their coffee carefully, working around the US’s undetonated ordnance.

After the years of issues and conflict, the Lao coffee is slowly but surely starting to make a comeback. Thanks to Laos’s climate, diverse landscapes, and ecosystems it’s a great country for the cultivation of coffee. Alongside bananas, rice, maize, and rubber, coffee is one of the country’s primary exports.

Approximately 70% of Laos’s geographic area is made up of mountain ranges, highlands, plateaux, and rivers, so it shouldn’t be any surprise that the best Lao coffee is grown to take advantage of this beautiful, unique country.

The Bolaven Plateau sits at the bottom of a huge volcano in the northeast of Champasak Province in southwestern Laos (fortunately it is extinct though… phew).

The area has a fairly cool climate and high levels of rainfall. Mountainous regions like this are excellent for growing coffee because of their altitude. Here, the coffee grows at between 1,000 and 1,300 meters.

For the coffee farmers of Laos, this area is a utopia for the production of their caffeinated crop. The ancient volcanic ash has made the soil dense with important nutrients that help when growing coffee.

Unfortunately, because of the undetonated ordnance, the farmers of Laos are careful to not implement the latest farming techniques, which means that their farms and production remain small. There are between 15,000 and 20,000 smallholder farmers working in this area alone. 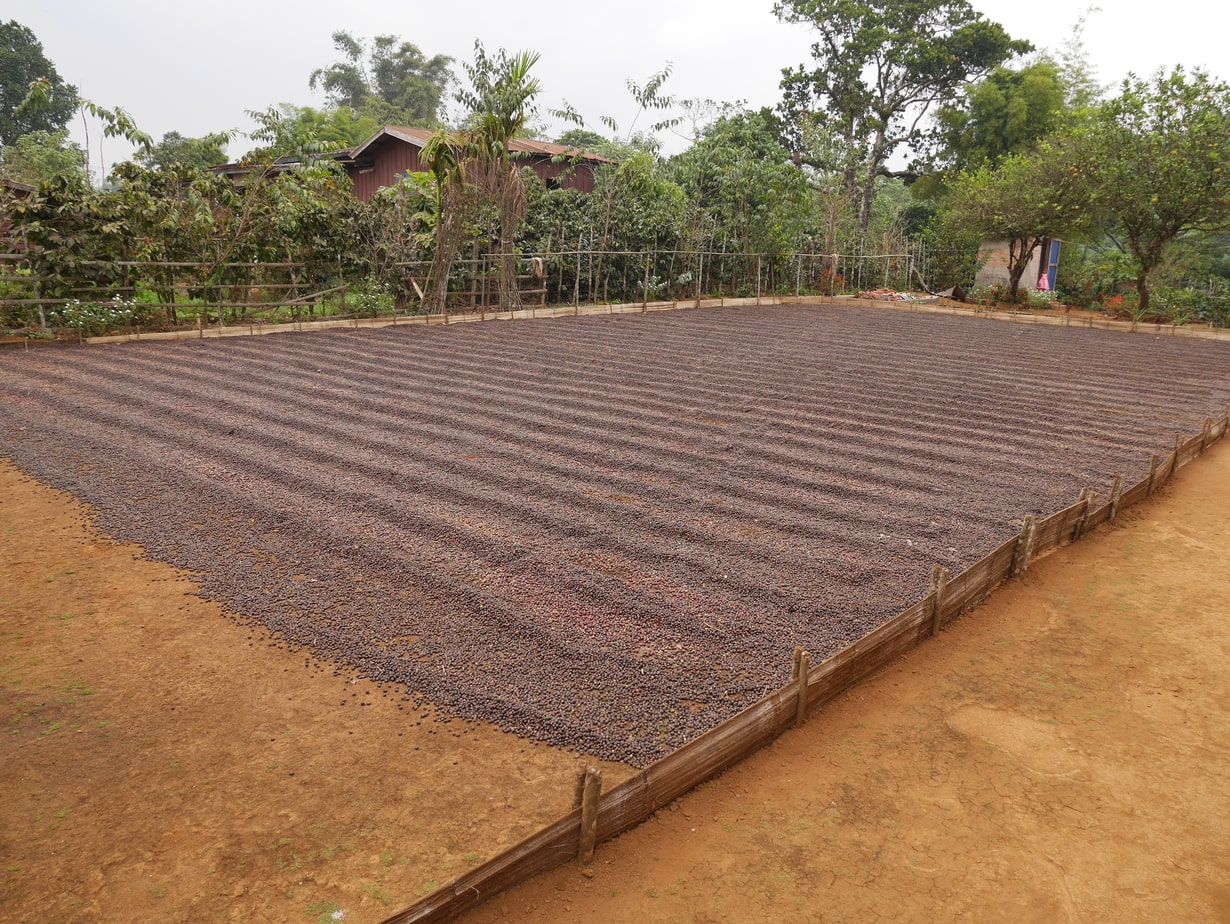 The coffee beans that Laos produces are of excellent quality. Currently, its average annual harvest yields 25,000 to 30,000 tons of coffee – 65% of these beans are Robusta, since its much easier to grow.

Importantly, Laos’s Robusta is considered some of the best in the world because it is mostly grown at an altitude of over 900 meters, compared to the usual 600 meters above sea level.

Over the last 25 years, both the Lao government as well as some agencies have been working hard alongside Laos coffee farmers to hopefully introduce a resilient Arabica coffee plant to the plateau that will be high yielding and therefore more lucrative.

For those working hard to harvest Lao coffee beans, this is an important development. Since for them, Arabica sells for roughly double the price of Robusta, it has gradually increased the amount of money they can earn from their work.

There is an emerging coffee culture in Laos that combines influences from the Western world with its own to create something unique.

The people of Laos don’t often take their coffee black – instead, they love mixing it with different forms of milk, like powdered, evaporated or condensed, as well as ice. Lao coffee is often made to be super strong, so if you find yourself about to take a sip of one, brace yourself!

Because of the milk, the coffee tends to be very sweet. The end product is a thick, sweet (and tremendously delicious) cup of chilled goodness, which is a perfect beverage for a weary traveler trying to escape the heat and just cool down.

Western-style cafés can be found in Laos too, with trained baristas serving the coffee-based beverages we know and love like lattes, americanos, and cappuccinos. The country takes pride in training skilled baristas to be able to serve whatever pick-me-up you might need.

Lao coffee culture is itself a combination of different coffee cultures. The influence of more Western coffee habits could be due to its past as a French colony. Whatever the reason, the Lao coffee industry is fuelling a very diverse crowd who are all head over heels for what Laos has to offer.

This fantastic roasting company is based in Vientiane, the capital of Laos. Established in 2001, it exclusively roasts and sells specialty grade coffee grown in Loas’ unique, volcanic plateau!

The company works directly with many farming groups to be certain that the product is roasted to specialty coffee standards. They sample all of the beans before purchasing to assure consistency and quality.

The coffee is roasted in small batches so that they can successfully monitor the quality of the beans. Also, this allows them to customize their roasts and blends – they have a lot of them! Their huge inventory of different beans reflects the diverse altitudes of the country and their different coffee processing methods.

We are all very jealous of their huge choice of beans and blends. Some of them include:

The company is a current member of Fair Trade Lao (FTL) and a former member of The World Fair Trade Organization (WFTO).

Unfortunately, while all their coffee is organic, it isn’t yet certified. 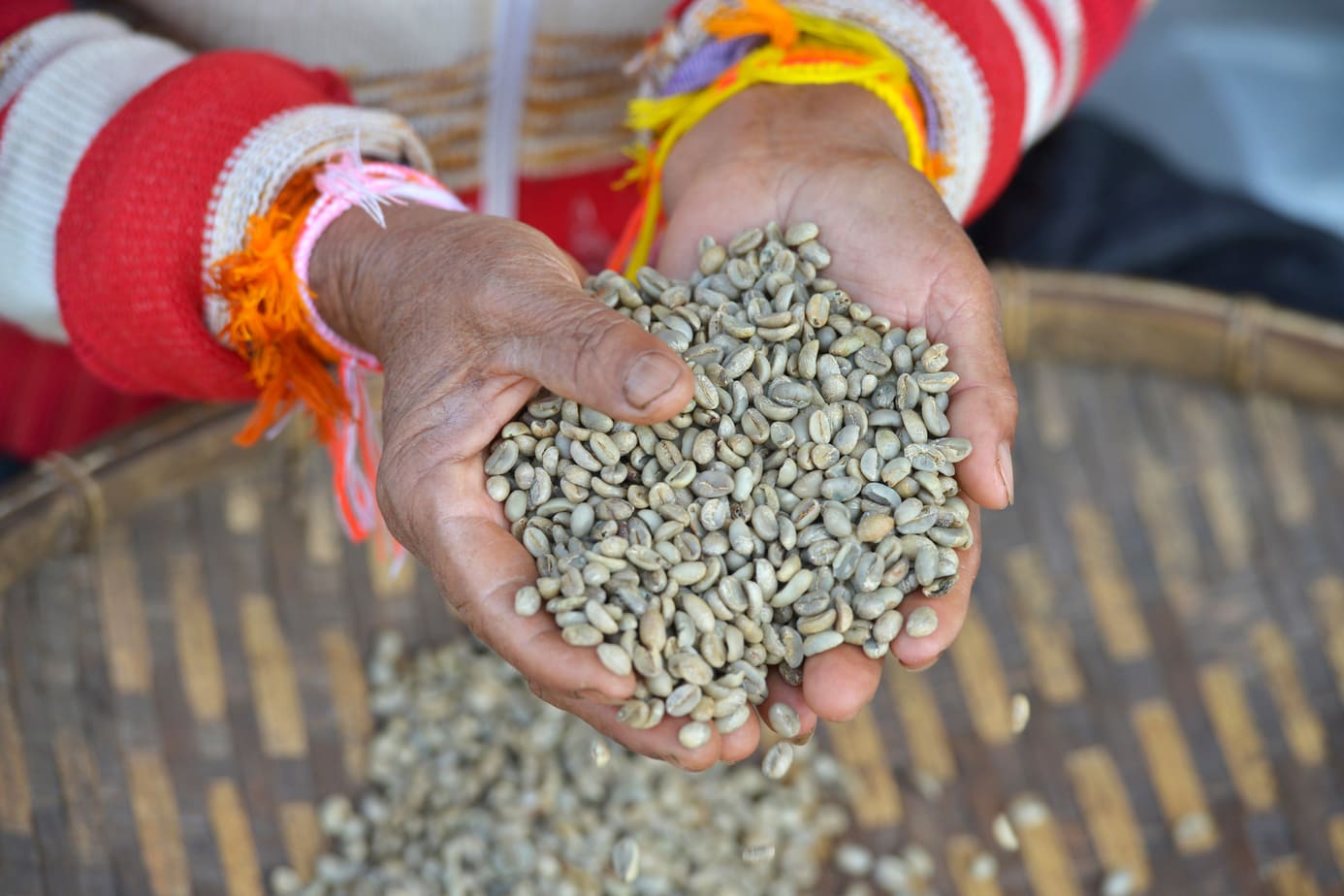 Coffee For All Kinds Of Coffee Fans

The coffee scene in this southeast Asian country is one that is thriving, not least because of its unique blend of different coffee cultures. After a few false starts, the hardworking people of Laos took over from where the French colonists left off.

The industry is growing fast and we at Roasty Coffee couldn’t be more excited about it. As it grows, more and more coffee will be able to be purchased online for your sipping pleasure.

Just a tip from us: keep an eye or two out for it, because before you know it the shelves will be empty and you’ll have to sit and listen to everyone else bragging that they got their delicious Laos coffee beans before you… and nobody would want that to happen.

How To Get Hot Water From a Keurig: A Simple Guide

Nespresso Creatista Uno vs. Plus: Which Model Is Better?

How To Clean A Coffee Maker Without Vinegar

Can You Use Evaporated Milk In Coffee?