Tampers to baristas are sort of like knives to a chef or books to a bibliophile. Baristas tend to collect them, always looking for the perfect model.

In general, tampers come in two forms: flat and convex. Deciding between them is a matter of both science and personal preference. Perhaps that’s why the great flat vs. convex tamper debate rages on. There’s no correct answer, per se, but there are reasons you might choose one over the other.

Below, we discuss those reasons in full. But first, let’s briefly discuss what tampers are and why they’re so vital.

The Importance of Espresso Tampers

If you’ve been brewing espresso for any length of time, you probably know the importance of an espresso tamper. These handy devices pack down espresso grounds in your espresso machine’s portafilter into a coffee puck to create a consistently balanced shot.

Evenly packing espresso grounds is crucial to brewing balanced espresso because water tends to channel. See, water is an opportunist; it likes to take the path of least resistance. And, when it comes to brewing espresso, that can create issues.

If you leave espresso grounds unpacked or poorly packed, water is more likely to travel down the sides of the filter basket or take the channels of least resistance through the loosely packed grounds, resulting in uneven distribution of water through the grounds. Channeling in that manner means the water has less time to extract flavor from the beans. The result is a watery shot that no one wants to drink.

With a good espresso tamper and a little tamping technique practice, you can prevent watered-down shots. But finding the best espresso tamper isn’t as straightforward as it seems. There are two major types of espresso tampers: flat and convex. And, there’s plenty of debate over which one’s best.

ESPRO Espresso Coffee Tamper - Calibrated Stainless Steel Flat, 58 mm, Black
Check Price on Amazon If you click this link and make a purchase, we earn a commission at no additional cost to you. Last Update: 2022-01-18

A flat-based tamper has a perfectly flat base, as you might have guessed. So, when you apply even pressure to them, they create a straight and even puck. This should, in theory, stop any water channeling and create a superior shot.

Proponents of flat bases say they are easier to use and provide a more consistent product. There’s also some evidence that they provide better extraction when compared to a convex base.

There may be one small problem with flat tampers, though. There is potential for water to channel between the edge of the packed grounds and the basket. Fans of flat tampers say that this risk is null and can easily be mitigated with the proper technique and base diameter. But, the critique exists all the same. 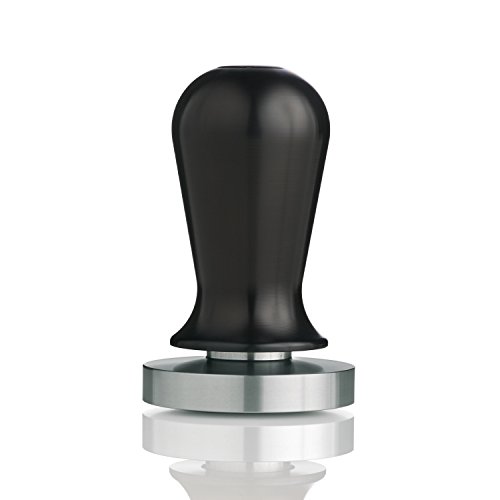 ESPRO Espresso Coffee Tamper - Calibrated Stainless Steel Convex, 49 mm, Black
Check Price on Amazon If you click this link and make a purchase, we earn a commission at no additional cost to you. Last Update: 2022-01-18

Convex tampers have a base that’s rounded ever so slightly. The theory is that a convex coffee tamper creates a seal between the espresso grounds and basket, forcing water to go through the beans rather than seeping down the basket sides.

However, opponents point out that convex tampers may be harder to use because applying even pressure can be tricky. And, they may not be as efficient when it comes to extraction.

However, a convex tamper may be ideal for baristas that don’t want their fingers to touch the grounds. With a flat tamper, it’s best practice to use your finger to “level the mound” before you tamp the grounds. A convex tamper doesn’t require that step because it will inherently push the center of the beans towards the edges of the portafilter, crushing any central pile-up.

The debate over the difference between tamper bases will probably always exist. Flat tampers may be easier to use and may promote better extraction.

Convex tampers, however, may be essential for keeping water where it’s supposed to be; running through the espresso grinds rather than side-channeling between the basket and puck. And, convex tampers are ideal for baristas who don’t want to touch their fingers to the espresso grounds.

In truth, the best tamper will be the one you’re most comfortable using. You can generate fantastic results with either a flat or convex style as long as you’ve practiced the technique required for your chosen type.

That’s why many baristas say that the style of the tamper base, flat or convex, is less important than other factors.

Other Factors to Consider

Whether you choose a flat or convex tamper, there are a few things to consider:

The diameter of your tamper should fit your basket perfectly. Your espresso machine likely lists the right size somewhere in its user guide. Using an undersized tamper will lead to uneven tamping, which means, you guessed it, water channeling and uneven extraction. And, no one wants that!

The best quality tamper also has a little weight to it. Tampers shouldn’t cause you to strain your wrist using them, but they shouldn’t be light as a feather, either. That’s why high-end tampers tend to have solid, stainless steel bases and sturdy handles. It allows you to apply consistent pressure, which is sort of the point!

Your ideal tamper will also fit your hand and technique. For example, many baristas using flat tampers use their fingertips as a guide when applying pressure. When the tips of their fingers meet the edge of the basket, they know they’ve applied pressure perfectly. A long-handled tamper, then, could restrict your capabilities.

Calibrated models have internal pistons that are pre-calibrated to standard pressure (usually 15 PSI). So, they press the grounds together just enough but not too much, providing a more consistent shot.

Comparing flat vs. convex tampers shows that the tamper shape is somewhat negligible compared to other factors like size and weight. However, there’s no doubt that each form has its advantages.

Flat tampers may provide better extraction, and many find they’re easier to use. Convex tampers are better for preventing side channeling, though, making them popular options with many baristas. Regardless of which one you pick, the best tamper is the one you’re most comfortable with.

Acaia Pearl vs. Lunar: Which Coffee Scale Will You Choose?

Should You Brush Your Teeth Before Or After Coffee?