What is a Ristretto?

Not all of us speak Italian, so figuring out exactly what each drink on the coffee shop menu is can be a little challenging — especially when franchises start throwing in made-up terminology like the “Frappuccino” into the mix (we’re looking at you, Starbucks)!

Deciphering each term on the menu board means is difficult but not impossible; coffee drinkers do it all the time! And we’re here to help you out, starting with the word “ristretto.”

Maybe you’ve seen this term at your local café or even printed on a Nespresso coffee capsule, but you just haven’t gotten around to asking any of the coffee fanatics in your life what exactly the drink is. Or perhaps you’re a total coffee newbie who’s still learning all the ins and outs of the coffee menu.

Wherever you find yourself, don’t worry; we’re here to give you the lowdown on ristretto coffee. Read on to find out more, and once you’re finished here, impress all of your friends with your new knowledge of both coffee drinks and the Italian language. 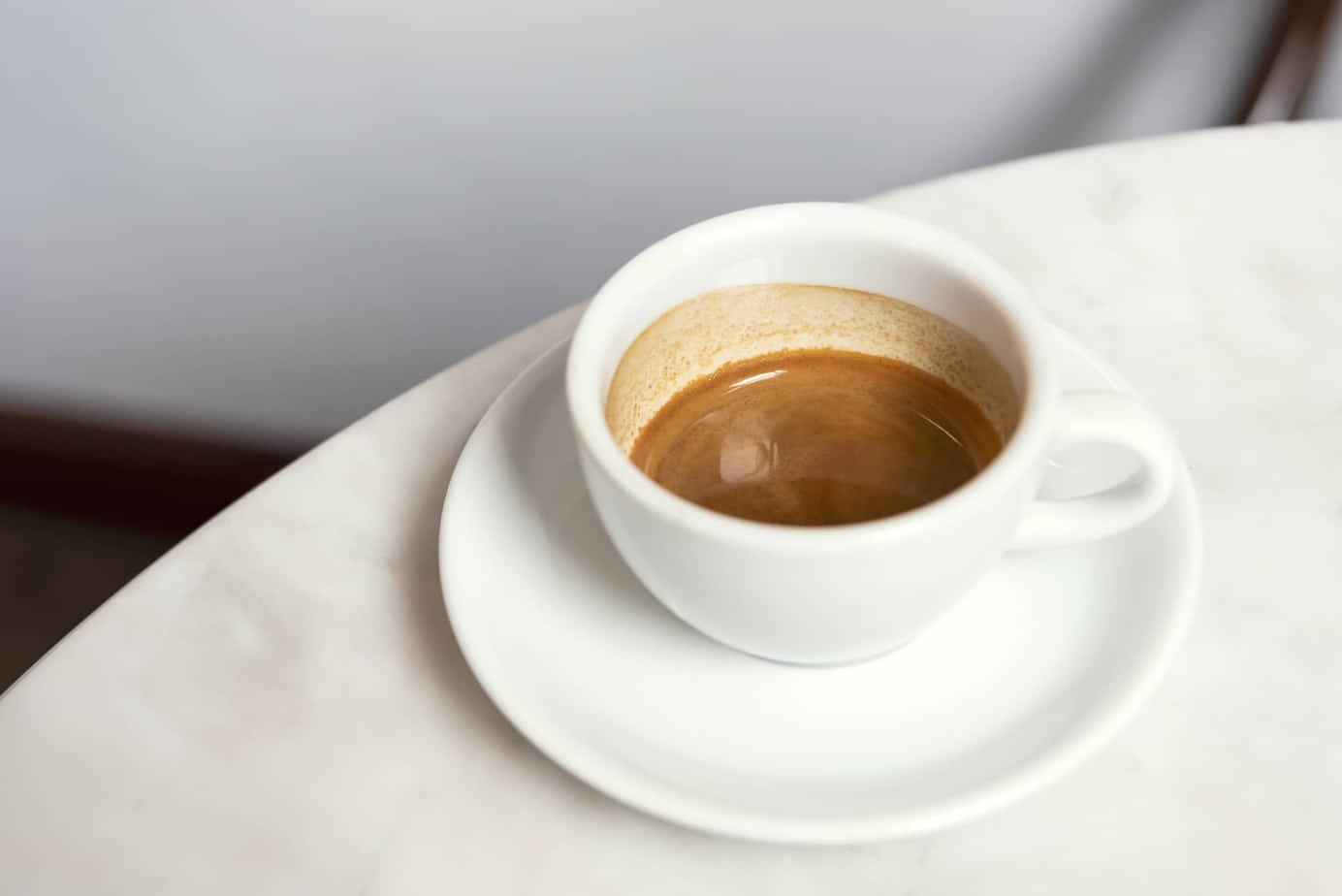 To better understand what ristretto means, you first need to understand the mechanics of a basic shot of espresso.

Espresso is a highly concentrated coffee drink used as the base of most of the popular specialty drinks many passionate coffee lovers swear by. A shot of coffee produced by an espresso machine is super-rich and pretty strong with a full-bodied flavor and the distinctive crema on top.

An espresso shot is generally about 30 milliliters, and baristas make it by using high-pressure brewers to force hot water through extremely fine coffee grounds for 25 to 30 seconds. 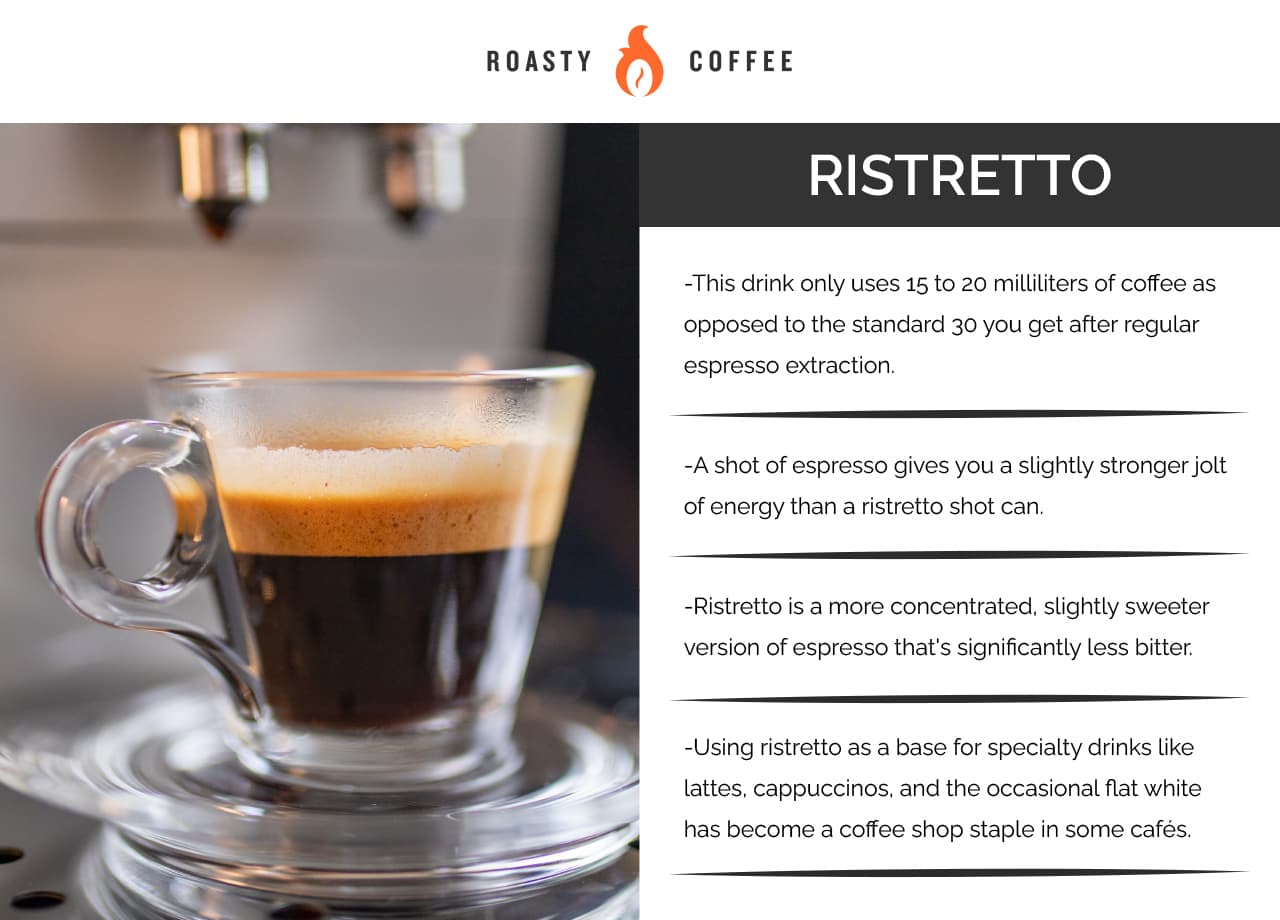 Though the stuff has been enjoyed in Italy for years, ristretto didn’t rise in popularity in the United States until the 1980s. We can credit Espresso Vivace café owner David Schomer with the short shot’s sudden fame, as he declared it to be “the best of coffee extracts.” His is a voice true coffee fans can trust, as his book on espresso preparation techniques is still a staple in cafés, roasteries, and even Specialty Coffee Association training centers today.

The difference between ristretto and regular espresso lies in the water to coffee ratio used when brewing the drinks. Ristretto means “restrict,” and the beverage is called that because you reduce or restrict the amount of water used during the extraction process. Other than that, the temperature and pressure used to brew the drink are the same.

Because this type of coffee drink uses less water to brew, you end up with less liquid than you would with a basic espresso shot; ristretto is only 15 to 20 milliliters of coffee as opposed to the standard 30 you get after regular espresso extraction. So, most coffee shops only sell double ristretto shots so they can give customers something that’s about the size (or slightly larger, depending on the barista) of a typical espresso shot.

Note that less water being pushed through the grounds makes a significantly more concentrated pull that tastes like a more intense espresso shot: bolder, fuller, and with more body and fewer bitter flavors.

As we mentioned before, the ristretto-making process is nearly identical to pulling a normal espresso shot, but with half or two-thirds the amount of water. Most espresso machines can brew the richer and stronger dose of coffee, even without a preset; luckily, even the most basic machines have the option pre-programmed for you.

The step-by-step process for making ristretto is as follows, but keep in mind it does require an espresso machine:

And that’s it! Enjoy your ristretto!

How to Drink Ristretto

Typically, ristretto is enjoyed black so that consumers can enjoy its bolder, richer flavor to the fullest extent. But there’s no wrong way to drink joe, so if you’re someone who prefers sipping their supply of morning coffee with milk, feel free to add a splash of dairy (or your favorite non-dairy substitute) to your cup.

In fact, using ristretto as a base for specialty drinks like lattes, cappuccinos, and the occasional flat white has become a coffee shop staple in some cafés. Usually, the milk in these drinks will emphasize and complement the espresso’s sweetness, and it does the same for this type of coffee, too, resulting in a cup of coffee that’s both bold and sweet.

However, the practice of serving ristretto-based drinks hasn’t become very widespread, as most coffee shop patrons prefer to enjoy their favorite coffee drinks in their classic form. Some even complain that using ristretto as a substitute for espresso in drinks leads to a brew that tastes under-extracted.

Nonetheless, some coffee chains and mom-and-pop shops will allow you to request ristretto in your favorite espresso drink instead of a typical shot. If you’re a Starbucks Coffee fan, the company recommends you try it with the caramel macchiato, americano, Starbucks Doubleshot® on Ice, or the seasonal eggnog latte.

What is ristretto Bianco?

And speaking of ways to drink ristretto, let’s take a minute to talk about the ristretto Bianco. Its Italian name makes the beverage sound much fancier than it is, but it’s a pretty simple drink. It’s just like a latte, only smaller, and uses a double (sometimes a quadruple!) shot of coffee made ristretto-style.

Aside from the type of joe used to make it, everything about the ristretto Bianco mimics the latte: a few ounces of steamed milk are added to the shot, and a layer of milk foam sits on top of the prepared coffee beverage.

First, it’s important to note that, though the major difference between ristretto and a regular shot is the amount of water used during the brewing process, the two drinks do not taste the same. The decreased amount of water impacts the overall flavor of the joe in a couple of significant ways.

Once brewed, ristretto is a more concentrated, slightly sweeter version of espresso that’s significantly less bitter, too. A coffee buff can expect to taste more floral coffee notes in a sip of this intense coffee, so if you prefer something less earthy than your usual dose of espresso, ristretto might be right up your alley.

Is ristretto stronger than espresso?

In terms of flavor, ristretto is indeed a more potent dose of coffee than an espresso shot since it’s sweeter and more concentrated.

As far as a caffeine kick is concerned, a shot of espresso gives you a slightly stronger jolt of energy than a ristretto shot can, as a shorter extraction time means less caffeine. The smaller dose of caffeine is part of the reason why so many enjoy this joe black.

Should you go for it?

Now is the time to discuss the important part: should you try it?

We always encourage every true coffee lover to brand out and expand their coffee horizons, but tastes are tastes. If you’re already a fan of the traditional full-length espresso shot and you don’t mind a strong and somewhat sweet coffee drink, you should absolutely try a ristretto, the intense flavor of this amazing full-bodied coffee might be fun for you.

On the other hand, if you’re not into the idea of downing the double shot black, use a single or double shot of ristretto as the basis for coffee recipes that typically use a traditional espresso shot.

Either way, a demitasse cup of this drink is definitely worth giving a shot, and a ristretto sits near the top of our list of coffee recommendations.

How To Clean a Moka Pot: A Complete Guide to Maintaining Your Coffee Brewer