From boiling it to throwing in entire eggs, Swedish coffee can be pretty exciting. As one of the top 10 consumers of coffee in the world, the Swedes must be doing something right. So today we’re going to dive into what exactly makes Swedish coffee special, from the fika culture surrounding it to the brew methods. 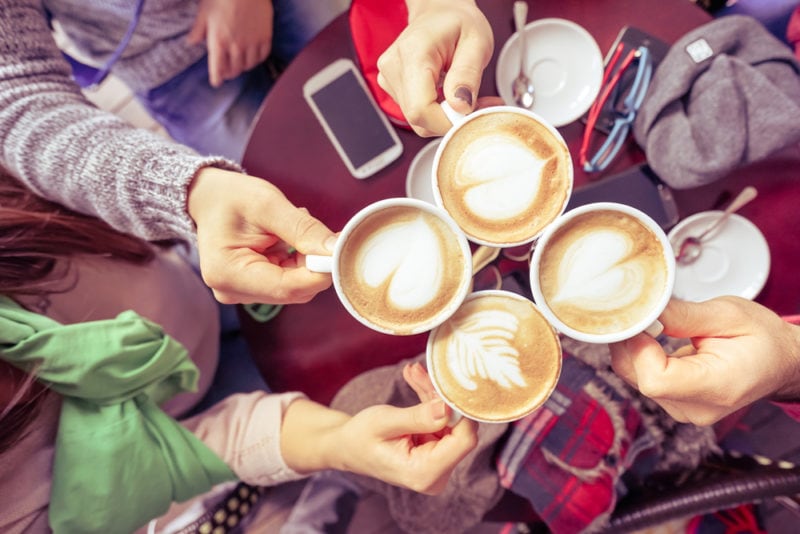 You may think the United States has a pretty huge appetite for coffee. But we have nothing on the Swedes. While the US consumes about 9 lbs of coffee per person each year, Sweden takes on double that at about 18 lbs/person/year. Plus, some recent figures have suggested that that number is increasing!

Consequently, coffee is a huge part of Swedish culture. The word they associate with it is fika, which is used both as a noun and a verb to describe when Swedes go to take their daily coffee break. To get a feeling for it, go watch this commercial put out by one of the top Swedish coffee brands, Gevalia.

People frequently fika at the office during morning or afternoon breaks. Some places even have dedicated fika rooms. However, during leisure time people also fika at restaurants or cafes. It is a popular option for a casual, flirtatious outings, similar to the American coffee date.

The fika is often accompanied by a fikabröd, which is simply some sort of sweet pastry. Kanelbullar (cinnamon buns), chokladbollar (chocolate balls) and cookies (or biscuits) are all popular options.

While obviously there are some more familiar coffee drinks floating around Sweden like cappuccinos and lattes, there are a few more traditionally Swedish drinks that are rather popular.

Now, this is the one coffee on the list that should  be familiar to you. Like in America, many Swedes opt for the tried and true drip coffee. It’s often consumed black alongside a sweet treat, as we mentioned earlier. Honestly, it’s hard to go wrong drinking a classic, black drip coffee, no matter what country you’re in.

Kokkaffe, literally “boiled coffee,” is a common method of coffee  brewing, particularly in the north. This relatively simple method for coffee preparation involves a pot/kettle (or pan if you want), coarse ground coffee, a small strainer, and a flask.

The grounds are similar to the grind used for a French press. To make it, those grounds are added to the pot with water, heated until it they reach a boil, allowed to settle, then the coffee strained into the flask or thermos.

This is a pretty quick, easy process that makes for an equally easy-drinking cup. It’s not as pointedly strong as, say, Greek coffee, so it’s great to sip from throughout the morning.

Next up is one of the more unique Swedish coffees: egg coffee. Now, we’ve talked a little bit about egg coffee here at Roasty before. But Vietnamese egg coffee only uses the yolk…What happens if you throw in the whole thing, shell and all? Then, you have Swedish egg coffee, which some people are calling the “perfect” coffee. And you’re about to find out why.

When everything is said and done, these ingredients will make one cup of coffee. If you’re aiming for more, simply multiply accordingly.

First, boil the room-temp water in your saucepan or a small pot. (size dependent on how many servings you’re making).

While the water is coming to a boil, go ahead and crack the egg into a cup. If you’re making several servings, you may need a small bowl. Put the whole egg in there! Yes, including the shell. Stir everything up.

Once the egg is crushed and stirred, add in your coffee grounds and stir them together. This concoction, called an egg-coffee slurry, will look a little icky, but we promise it’s worth it.

Now your water should be boiling, so add in the slurry. Boil the mix for about 3-5 minutes and make sure to keep your eye on it. There’s a good chance it’ll try to overflow. You’re waiting for when the slurry clumps up into a big chunk and floats at the top.

You should then be able to filter the coffee to get an ultra-smooth cup. Running it through a French Press will also work nicely.

And there you have it! A delightful cup of Swedish egg coffee right at home.

Essentially, the albumen in the egg white, when broken down during boiling, has proteins that rebind to other particles. Because those macromolecules are responsible for bitterness and other impurities, putting an egg in your coffee mellows it out.

This chemical process also results in a stronger caffeine kick, which is great news for a lot of coffee fanatics, as most high-caffeine coffee is rather bitter due to the Robusta beans. Ultimately, the egg makes for a much smoother, almost velvety, drink. And that’s without any milk!

In addition to the exciting stuff that happens thanks to the egg itself, there are also some perks to leaving in the eggshell. As you already know, coffee on its own can be rather acidic, especially if you are using a lighter roast. However, eggshells are alkaline (or basic).

Basic substances neutralize acidic ones (this is how Pepto or Tums gets your stomach acid to settle down). So adding eggshells to your acidic coffee means a good bit of the acidity will be completely neutralized. That, we have to say, is pretty darn cool.

Whether you’re looking to fit in when you travel abroad or simply looking to make things more interesting at home, Swedish coffee is worth checking out. Who knows, maybe you can get your friends to fika with you or perhaps convince them to try some of the smoothest egg coffee they’ve ever tasted!

Are Jura Super-Automatic Coffee Machines Worth the Money?

How to Choose the Best Water for Coffee