Seeing an Americano on a menu next to espresso once felt like an insult. I would imagine a scene where an American ordering a cup of coffee in Europe couldn’t tolerate a strong espresso and asked for a watered-down espresso, resulting in grumbles about “those Americanos.”

But is an Americano an insult? Every coffee drink has its place. And some people prefer Americano to espresso or other coffee drinks. We’ll explain the differences in the war of Americano vs. espresso, so you’ll know what you’re ordering without feeling insulted.

Espresso is amazing coffee with an attitude: short, dark, and strong. For many people around the world, a shot of espresso is coffee.

Don’t misunderstand espresso, though. Espresso is not a type of coffee bean or coffee roasting type; it is a coffee preparation method.

Brewing espresso requires the right balance of grind, heat, and pressure. The grind for espresso is smaller than for regular coffee. Studies show that the best-tasting espresso grounds have a wide range of particle sizes without being too small.

Then, the water has to be just the right temperature (190°F-200°F) and pass through a layer of tamped coffee grounds with at least nine times as much pressure as the earth’s atmosphere.

With such exacting standards to make the perfect espresso, how did it ever come about? By the 1800s, coffee shops were everywhere in Europe, but making coffee took time. In 1884, coffee brewer Angelo Moriondo devised “new steam machinery for the economic and instantaneous confection of coffee beverage.”

Thus, the first espresso maker was born. However, it needed a few revisions before Luigi Bezzera and Desiderio Pavoni hit upon the winning commercial machine to introduce at the 1906 Milan Fair.

Early espresso machines were able to produce up to 1000 cups of flavorful espresso drinks per hour. However, they could only produce up to 2 atmospheres of steam pressure without electricity.

Today, there are two ways to make espresso: an electric espresso machine or a stovetop Moka pot.

Moka pots are an inexpensive stovetop coffee maker option for making a good cup of concentrated espresso at home.

A Moka pot only produces one to two bars of pressure, which means that it takes longer to create a good cup of homemade espresso (about five minutes). However, the lower pressure does not affect the taste quality of the espresso.

Grind your coffee beans, tamp them down, and pass water through them quickly for instant coffee satisfaction. Traditional espresso machines can make a perfect espresso shot in 20-30 seconds rather than the 6-12 minutes it takes to drip brew a pot of black coffee.

If you want a more robust coffee flavor without resorting to a darker roast, you want an espresso. Moka pot espresso is concentrated coffee two to three times stronger than coffee from a drip coffee maker. However, it’s still slightly weaker than espresso from a high-pressure espresso machine.

Espresso from an espresso machine will produce a flavor three to four times stronger than drip-brewed coffee.

While cream is the favored dairy additive for drip coffee, espresso pairs better with steamed milk. You’ll find espresso as the base for several coffee drinks, such as lattes, cappuccinos, and mochas. Each has a different ratio of espresso to milk (often steamed) and foam.

Does Espresso’s Stronger Brew Mean It Has More Caffeine?

If you order espressos and espresso-based drinks because you think they have a higher caffeine content, I’m about to turn your world upside down.

Ounce for ounce, an espresso drink has more caffeine than regular drip coffee. However, the serving sizes are different for espresso (one ounce) and coffee (eight ounces). An espresso serving has 60 mg of caffeine compared to a coffee serving with 95 mg of caffeine. 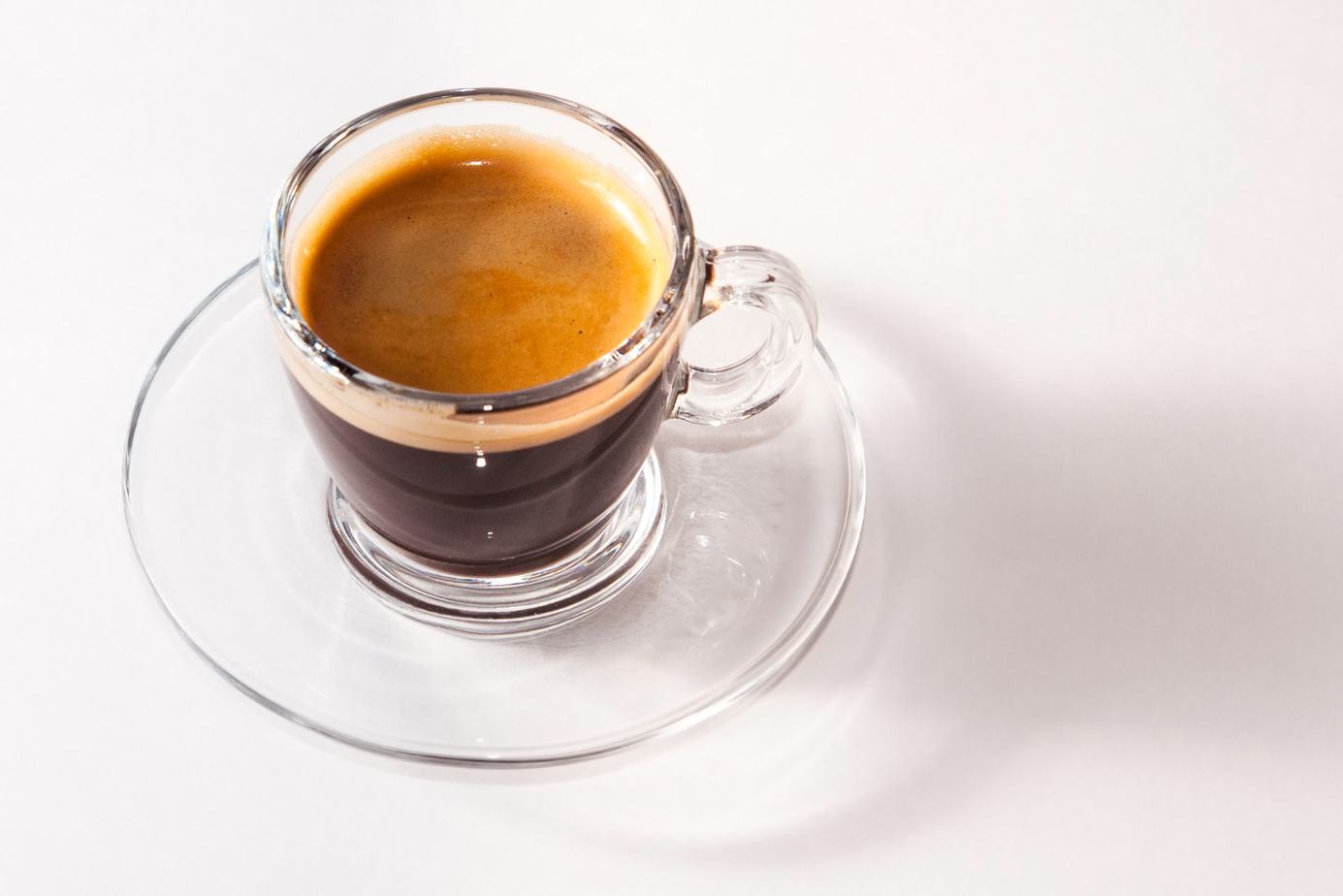 There’s nothing wrong with preferring the taller, lighter, and weaker. Americanos may not be as strong as their European brother, the espresso, but they can still satisfy.

Creating Americano is easy. Just add hot water to espresso, and you’re done. The amount of water and the order in which baristas add it varies. However, a ratio of espresso to hot water closer to one-to-one can prevent you from diluting the flavor.

Rumors of  Americanos from History

Italians use the term “caffè Americano” for American coffee. The unverified rumor is that American soldiers in Italy during World War II ordered espresso shots and added hot water to dilute the strength of espresso and make it taste more like their version of coffee.

However, both a short story and a novel from 1928 mention a drink in Naples during World War I that they call an “americano.”

Does an Americano taste like coffee? Oh boy. Now that’s a loaded question. Of course, coffee aficionados will say that Americanos usually have a richer taste and better-balanced coffee flavor than regular brew drip coffee. But, of course, that depends on the beans, roast, and coffee grind.

A bean with a strong taste and roast using the proper grind will taste stronger than coffee. However, a weaker flavored bean or roast with the wrong grind may taste weaker than coffee.

Why Would I Want an Americano Instead of Espresso or Coffee?

For artisanal presentations of a strongly flavored coffee bean, some baristas may offer Americano coffee rather than overpowering espresso.

Like the rumored World War II soldiers, you might find yourself wanting a coffee at an espresso bar that doesn’t offer it. But, armed with a little coffee expertise, now you can order an Americano instead.

Americanos are also a good choice for the family coffee addict if you want a coffee but want less caffeine without going decaf.

What’s The Caffeine Level in Americano? 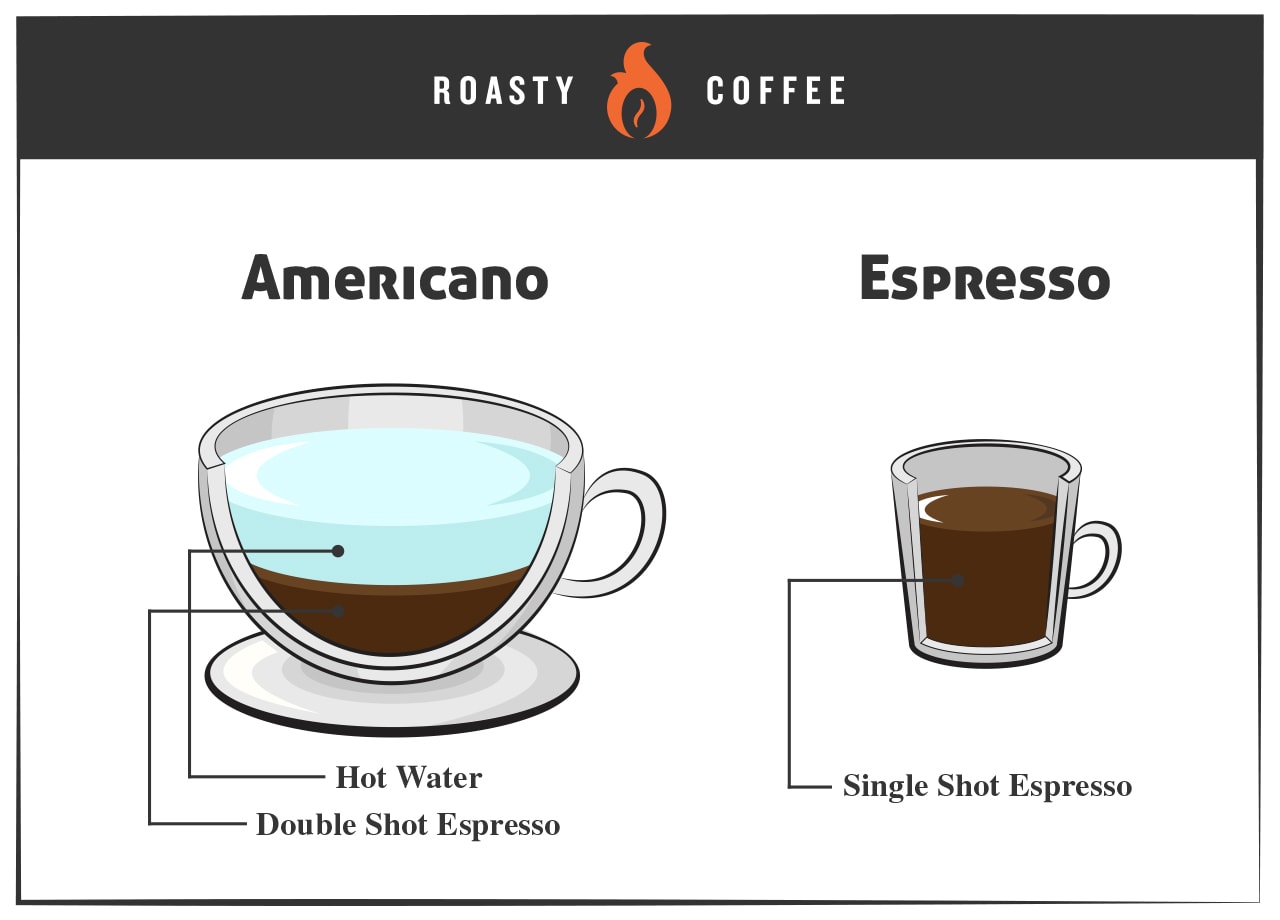 Now that you know more about espresso and Americano, it’s easier to compare the two drinks.

An espresso serving is a single one-ounce shot, while an Americano serving is at least two ounces or two shots of espresso. An ounce doesn’t seem like much, but people often sip strong drinks longer and take more time to enjoy them.

Americanos more closely approach the taste of a strong drip coffee than espresso, but their flavor profile tends to be stronger than coffee.

Because a serving of Americano contains a serving of espresso, both have the same amount of caffeine. At 60 mg, both Americano and espresso have less caffeine than drip coffee at 90 mg.

How Do You Take Yours?

You can enjoy a double shot of espresso made from finely-ground strong coffees either alone or with milk, steamed milk, or foam. Common espresso drinks include macchiatos, lattes, cappuccinos, and mochas. Flavors, sweeteners, hot or cold, or even iced coffees are also options.

Now that you know all about the difference between Americano and espresso coffee, enhance your coffee knowledge and up your coffee game with some amazing coffee recipes. Try an iced espresso. Compare the taste of Americano and drip-brewed coffee by making your favorite coffee house beverage. You can enjoy an Americano alone or as you would a cup of drip coffee with or without creamer or sugar, hot or cold.

The Complete Guide To Choosing The Right Coffee Filter

18 Great Ninja Coffee Bar Recipes to Spice Up Your Routine