French press and espresso are two of the most fundamental and traditional coffee brewing processes. The end result of both methods is a strong, dark brew that can form the basis for many of the coffee-based variants that are enjoyed in hipster hangouts across the world.

But, the similarity ends there. 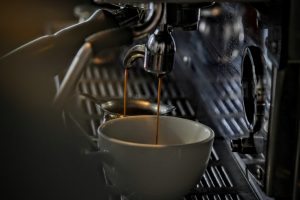 As a budding home barista and coffee enthusiast, it’s surely your duty to understand the difference between the two. And as usual, you can rely on us to provide you with all you need to, A. sort the wheat from the chaff, and B. to produce both these brews correctly and to perfection in the comfort of your own kitchen.

Oh yes coffee fan, you can make French press and espresso coffee at home, although which you choose may be dependent on your budget and how much time you have on your hands.

So, let’s compare and contrast …

French press brewing method … taking the plunge (so to speak)

First of all, let’s look at the French coffee press. Or if you prefer, cafetière à piston, cafetière, press pot, coffee plunger, coffee press, or cafeteria.

Anyway, a French coffee press is basically a narrow cylindrical carafe (beaker) made from glass, plastic, stainless steel, or stoneware. The carafe has a plunger that fits tightly within it. A handle is fitted to the plunger on the top of the press’ lid.

To prevent the grounds from invading your coffee, the plunger rod attaches to a circle of fine wire or nylon mesh filter screen and disc. These components are held firmly in place against the carafe by a surrounding spring.

Here’s our overview of how to master the French press:

Time is of the essence …

A major plus point of the French press coffee over espresso is the speed that it takes to produce a large volume of coffee.

Espresso machines produce very strong, rich coffee in small quantities, whereas a French press can give you a liter of brew right off the bat.

This makes French press coffee the go-to option for social gatherings when you need to serve multiple cups of brew in one sitting.

So, what flavor profile will you get from French press coffee?

The flavor produced by the French press brewing method is dependent on a number of factors:

If you enjoy a deep, strong flavor, you’ll probably fall in love with French press coffee. French press coffee requires a coarser grind. If the grounds are too fine, they’ll run through the mesh filter and into the coffee. Coarser grounds give you a different flavor profile to that produced by the original bean. 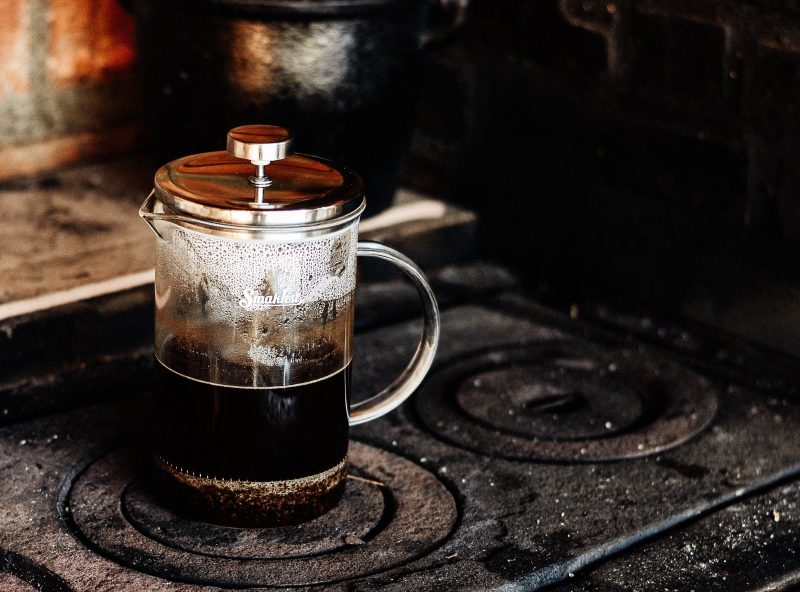 Generally speaking, the finer the grounds, the more they will be exposed to the water within the carafe. Since the extraction rate of coffee grounds is greater with a large surface area, a finer grind usually means a bitterer flavor. Therefore, coarse grounds will give you a milder, less acidic flavor, and they won’t pollute your brew.

If you have a particular bean that you love, buy yourself a coffee grinder and make your own grounds. That way, you can dictate the coarseness of the end result too.

The flavor of French press coffee is also influenced by the presence of oils that are not extracted by the mesh filter. Although many coffee fanatics love the depth of flavor that these oils produce, coffee oil is blamed for increasing cholesterol. If you’re a health freak as well as a coffee nut, you can mitigate the potential damage that these oils could inflict on your arteries by using a paper filter.

Brewing a cup of Java in a French press, cafetière, piston … whatever

The bottom line; invest in a French coffee press and you can enjoy a satisfying, traditional home brew, without shelling out on the hefty price tag of an espresso machine. If you enjoy camping, hiking, and coffee under the stars in the great outdoors, an espresso machine definitely won’t fit in your backpack. On the other hand, a dinky-sized French coffee press and some home-ground coffee will make it all the way around Yellowstone without giving you a hernia.

So, that’s French press coffee in a nutshell.

Oh yes, you’ll also be pleased to hear that super-trendy cold brew coffee can be made in a French coffee press. How impressed are your coffee drinking mates going to be when you serve them an ice-cold brew at your next summer BBQ?

Espresso forms the basis for most coffee-based drinks. Every coffee house has an espresso machine. It’s that fancy (and very expensive) piece of kit that sits steaming and grinding in pride of place on the countertop, producing that delicious, mouthwatering smell of fresh-brewed coffee that we all love.

You can buy your own espresso machine for home-brewing. However, if you don’t have the budget for such an investment, you’ll be pleased to hear that you can make your own espresso, without the bells and whistles of a machine.

Espresso is basically very strong, concentrated black coffee. This potent brew is made using coffee beans and water via a special brewing process that takes place inside the machine. Espresso is created by forcing steam under pressure through very fine coffee grounds. The steam passes through the grounds at around 2000F, drawing out the flavor quickly and efficiently.

So, there you have it. French press coffee is cheap and quick to brew right there in your own kitchen, bedsit, camper van, on the beach etc. Espresso can also be made at home, using a fancy machine if you can afford one, or by other methods if you can’t.

Both methods produce a caffeine-rich brew that’s full of depth and flavor. Both are versatile and can be used to make most coffee-based drinks.

Do Keurig Cups Expire? When To Let Your Old K-Cups Go