Bonavita Scale Review: Is It Worth Buying?

A coffee scale is an important tool for brewing with precision. We think that the Bonavita scale is a decent option, but it doesn’t have enough features to justify the cost. Keep reading for our full review.

Are you trying to make a better cup of coffee? Well, great coffee requires using exact ratios for ingredients, and that’s where a coffee scale comes in.

A good coffee scale will help you measure your ingredients with precision, but is the Bonavita scale the right one for the job? We think this middle-ground scale is a decent option, but it’s not ideal. Read on to learn why and find out what we recommend instead. 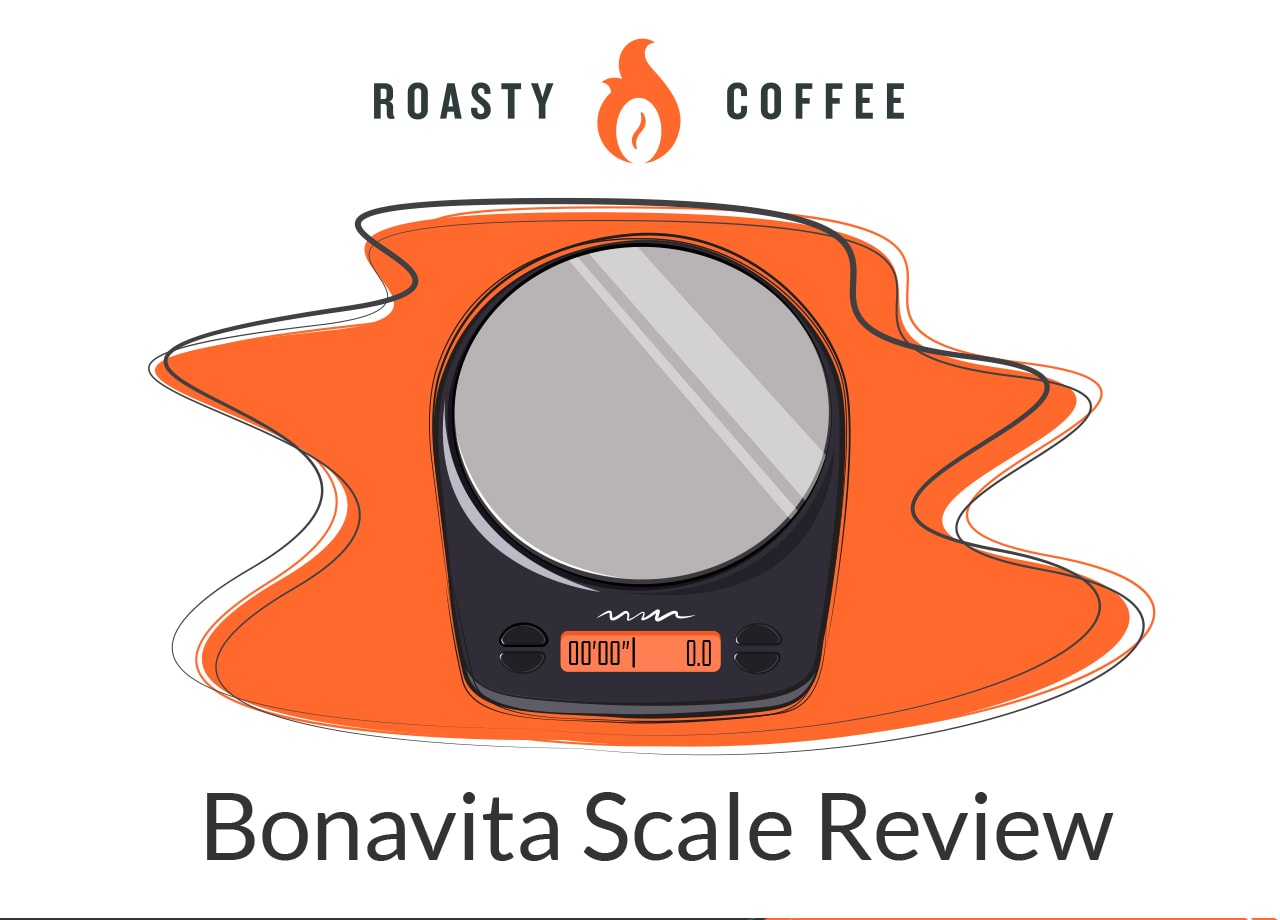 There are plenty of coffee scales on the market. To choose the right one, there are a few things you need to consider.

How Much Coffee Do You Want to Make?

Coffee scales work best when you’re making single cups or small pots of coffee. They aren’t practical for some larger coffee makers, so if you plan to make coffee in bulk, these won’t help you as much.

How Easy Is It to Recharge?

Bonavita’s primary model (which we’ll discuss more below) is a rechargeable system that uses a USB cable for power. This is fine if you have plenty of outlets around your kitchen.

However, if you’re limited on sockets, you might need to take your scale somewhere else in the house, which many users might find inconvenient.

How Often Do You Want to Use It?

Bonavita scales are worth considering if you make coffee and want to make it significantly better.

If you’re only a casual coffee drinker, making a cup of joe or a shot of espresso just every so often, you may not need to invest in a scale.

In general, this scale is useful for all types of coffee brewing methods but may only be practical for devoted coffee lovers.

That said, like most kitchen scales, Bonavita scales are useful for calculating the weights of other ingredients.

You’re not limited to coffee, but factors like its maximum measuring weight become more important if you want to use it for other things.

In summary, buying any coffee scale is more complicated than finding a fair price, but we’re here to help you make an informed decision.

The primary model that Bonavita currently sells is the BV02001MU, which advertises a unique coating that helps prevent water damage. It measures in increments of 0.1g all the way up to 2000g, with an optional display in ounces if you’d rather use that.

We don’t recommend using ounces because they’re less precise than grams, but it is nice to see that this scale has flexibility. It also features a pour-over mode, so you can weigh as you’re adding water or other ingredients.

Here are the main benefits you can expect from Bonavita scales:

This is one of the scale’s most important attributes, even if it doesn’t seem like it at first. Coffee scales often wind up in close proximity to hot water, so a slight slip of the hand when you’re pouring water could damage scales without some type of protection.

First, the durable coating helps prevent water damage by creating a seal over the scale itself that stops hot water from getting through.

It probably won’t hold up if you intentionally pour boiling water over it for a while, but it is sturdy enough to hold up under regular use.

Second, the coating makes the surface easier to clean. Without that, you might get trace amounts of coffee buildup on the surface of the scale, throwing off its weight readings when you’re aiming for precision.

These scales are accurate down to 0.1g, which is suitable for all but the finest kitchen work. To put it another way, if you need to be more accurate than a tenth of a gram in the kitchen, you’re probably not making coffee.

Ratios are important, but going beyond this level isn’t necessary for a great cup of coffee.

The scale maxes out at 2000 grams, which is roughly 70.5 ounces or 4.3 pounds of coffee beans. That’s more than enough range for most coffee-brewing activities, but it does highlight one of the flaws with this product.

First, chances are you’re not measuring coffee or water alone. You also need to consider the weight of mugs, so if you’re using a heavy cup, its weight limit could come up a lot faster.

Second, despite its reasonable measuring range, this scale isn’t particularly large. It’s only a little bigger than a wide cup, and thus somewhat smaller than many other scales you could use in the kitchen.

Smaller scales aren’t as versatile, so this fundamentally limits the Bonavita scale’s utility compared to other products. This is one of the reasons it’s not on our list of top scales, and that alone tells you most of what you need to know about this product.

I both like and dislike this feature of the Bonavita scale, and here’s why.

Wireless scales are useful in the kitchen because you can use them anywhere you want. In fact, it’s kind of rare to find a wired scale unless it’s a heavy-duty, restaurant-style scale that gets used all day. That, by itself, isn’t a notable feature.

However, the decision to make this device rechargeable is a departure from many other scales, many of which use batteries. Being able to recharge it the same way you recharge other devices is nice.

The problem, of course, is that you need a socket for this. Coffee scales are at risk for damage from splashing coffee or hot water, and weak points like sockets for plugs are no exception. There’s a non-zero possibility of damaging your scale if water splashes around that area.

This is actually rather rare for coffee scales, so it helps Bonavita products stand apart from the competition. The cover is exactly what it sounds like: a sturdy cover that you can put over the scale to protect it when it’s not in use.

This cover is not a good substitute for a container, though. It protects the top of the scale, but if you pile other things on top of it, you could still throw the readings off over time.

In other words, the cover has minimal advantages, except when you’re storing the scale, so don’t think of using it as a way to get better space economy in your kitchen.

Bonavita uses a simple, straightforward on-off button system for their scale. I prefer this to auto-off scales because those tend to turn off at inconvenient times, slowing me down and forcing me to take a little longer to make a cup.

However, opinions vary on features like these. Some people prefer auto-off systems because they help save battery power. I think this feature can be either good or bad, depending on how you want to use your scale.

If you’re looking for an accurate kitchen scale that you can use for many different products, an on/off button is better because you can keep it on for as long as you need.

If you only want to measure coffee, an auto-off system is more convenient because you won’t have it on for very long.

The Bonavita scale isn’t a bad scale. It measures quickly and accurately, comes with some nice features, such as a built-in timer, and is easy to clean and store.

However, we don’t think this scale is as good as some of its competitors. Factors like its size, vulnerability to splash damage, and some reported manufacturing defects stop it from being one of my top recommendations.

If you’re looking for a better option, try the Coffee Gator Digital Scale. Coffee Gator’s scale is more affordable than the Bonavita, has a unique gripping surface to prevent sliding, and has a wider measuring range. Thankfully, both can be found on Amazon. 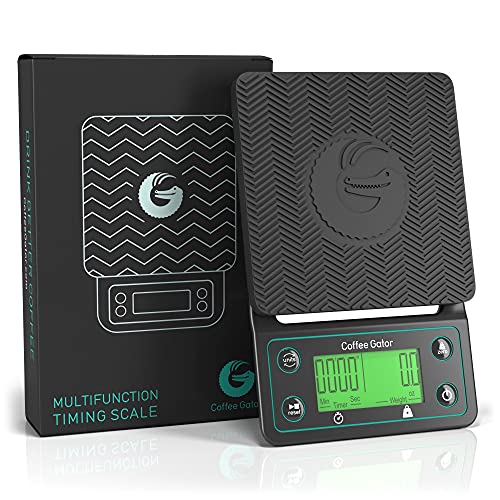 Coffee Gator Coffee Scale – Digital, Multifunctional, Weighing Kitchen Scale w/ Timer & ﻿Large LCD for Food, Espresso and Drink
Check Price on Amazon If you click this link and make a purchase, we earn a commission at no additional cost to you. Last Update: 2022-12-02

If you want a premium-grade product, consider the Felicita ARC Coffee Scale. This scale features a resilient aluminum body, an accuracy that’s just as sharp as Bonavita’s, and Bluetooth connectivity that can help you improve things like your pour speed.

I particularly like the metal body of this product. It weighs more than most of its competitors, sure, but many kitchen scales are made with relatively cheap plastic and don’t have anywhere near as much durability as Felicita’s product.

The high price might dissuade budget-conscious users, but if money isn’t an issue, look at the Felicita first.

Just making coffee is easy, but mastering coffee takes more work. Choosing a quality coffee scale can help take your coffee from a mere caffeine vector to a work of art.

Overall, I rate the Bonavita scale a 3.5/5. While it’s a decent product, I think more features are necessary to justify the price.

There isn’t much point in going for a middle ground when you’re getting a coffee scale. It’s better to get something that’s simple and affordable, or premium-priced and rich in features. Mid-range products like this one aren’t the best choice for most buyers.

Bonavita Scale Review: Is It Worth Buying? 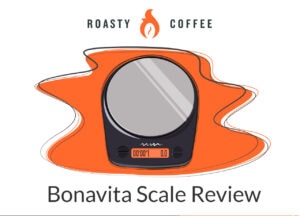 If you're looking for a new scale for your coffee beans, continue reading this article for our Bonavita scale review.

Editor's Rating:
4.3
Like Free Coffee? Get your first bag free with an Atlas Coffee World Tour Click here to get the deal

Siphon Coffee vs. French Press: Which Is the Better Brew?