Cayenne pepper in a cup of coffee sounds strange but is becoming a popular coffee shop drink. Cayenne pepper and coffee both have health benefits if consumed responsibly. Also, if you like coffee and spicy foods, you’ll almost certainly want them together! 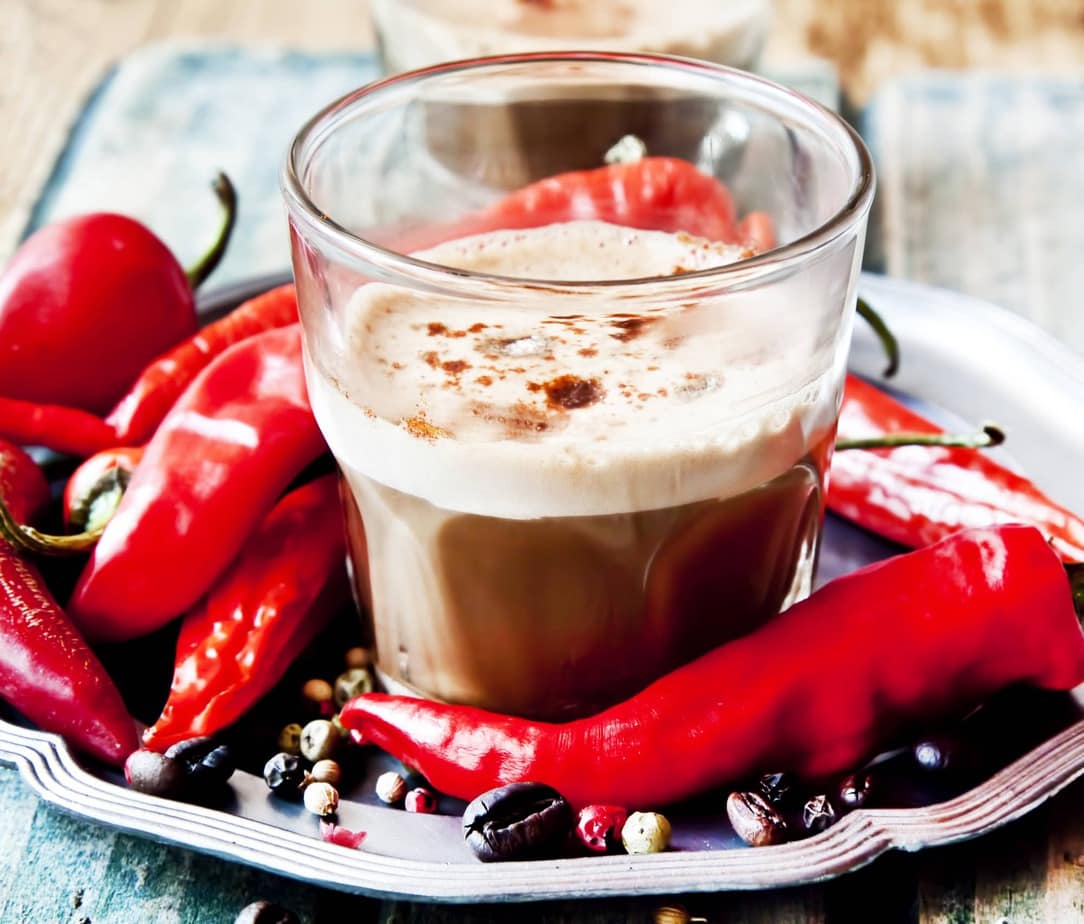 Coffee with cayenne pepper is quickly becoming a staple at coffee shops. Most of the time, the drink also has chocolate or cinnamon in it and is called an Aztec coffee. It might be a Mexican mocha or Mexican hot chocolate if it’s more hot chocolate than coffee. The tradition of adding spice to a hot drink goes back centuries in Central American culture.

Of course, if you don’t like spicy foods, don’t try this drink. I am curious as to why you’re even reading this article–there are plenty of other coffee drinks for you to try! But if you love spice and coffee, I highly recommend finding a coffee shop that makes an Aztec coffee or adding a dash of cayenne pepper to your morning coffee cup at home.

What are the Health Benefits of Cayenne Pepper in Coffee?

In addition to these benefits from the pepper, there are some benefits to drinking coffee. Although a coffee habit can be unhealthy (and it shouldn’t replace a meal), drinking black coffee can be a good thing for your health. Here are some of the health benefits of coffee:

Since both cayenne and coffee have such excellent health benefits, it makes sense that they would go well together. Some people take cayenne supplements in addition to drinking coffee. However, you can put a dash of cayenne in your favorite coffee to combine the two.

What are the Health Risks of Cayenne Pepper in Coffee?

Although there are many benefits to cayenne pepper, it can be detrimental to some people. If you already struggle with stomach ulcers, acid reflux, or heartburn, spicy peppers and coffee can make these things worse. It’s best to avoid both, whether separately or together.

Coffee, for all its benefits, can negatively influence your digestive system. Although capsaicin is an anti-inflammatory substance, it won’t be effective with excessive coffee in your system. If coffee hurts your stomach, putting cayenne pepper in won’t help that much.

Some people are susceptible to the caffeine content of a cup of coffee. Excessive caffeine in coffee might increase bowel issues, anxiety, insomnia, and jitters. If you’re especially sensitive to caffeine, stick to decaf and don’t drink later in the afternoon.

Cayenne and coffee have opposite effects on your blood vessels–coffee causes them to constrict, and pepper dilates them. However, the amount of coffee is much higher than the amount of pepper you’re consuming, so this shouldn’t be an issue.

How Do I Put Cayenne Pepper in Coffee?

If you’ve decided to put cayenne pepper in your coffee, there are a few ways to do it. You can either put it on the grounds or mix it into the hot coffee itself. No matter how you decide to brew your coffee, make sure that you don’t put in too much spicy pepper–aim for no more than a dash or two per cup.

The simplest method is to put the pepper in a brewed cup of coffee. Some people like to add milk and sugar to offset the spice, but many spicy food lovers enjoy cayenne coffee black. You can even add chocolate for an Aztec coffee, famous in many coffee shops.

You can add cayenne pepper to iced coffee or hot coffee (but keep in mind, it will dissolve better in the hot coffee, so add it before you ice it). Cold-brew cayenne coffee is also possible and can be even more potent than hot brew because the pepper has more time to dissolve.

How Do I Heal a Cayenne Pepper Burn?

Sometimes, no matter how careful we are, unfortunate mistakes happen. We’ve all burned ourselves on a hot drink, but it can be hazardous if there’s also hot pepper in the glass. Capsaicin has health benefits but is still incredibly acidic and can burn your skin, mouth, or eyes.

If you’ve gone overboard on the pepper-in-coffee situation, that’s okay. Don’t drink water to try and cool the burn. Instead, get some milk or yogurt and let it sit in your mouth for a while. Water will move the capsaicin oils around and sometimes worsen the pain, but the fats in milk break down the oils and release the pain.

To relieve the stinging pain of a pepper burn, soak the affected area in a cool compress of milk. If the oil gets in your eyes, don’t be afraid to flush out your eyes with milk! Unless you’re lactose intolerant (in which case, use castor oil or artificial tears), milk won’t hurt your eyes and is the easiest way to dissolve capsaicin.

Cayenne pepper is a popular addition to many dishes, and coffee is no exception. Peppers combine well with coffee and provide health benefits as a bonus. With the right amount of cayenne in coffee, you can give your cup a kick and bring it to coffee shop levels.

How Much Caffeine is in a Cup of Coffee?

How Many Shots of Espresso Is Too Much? Healthy Limits

How To Drain Keurig Coffee Machines – Our Helpful Guide