Coffee and grapefruit juice sounds like a weird combination, but it’s an interesting new trend. We don’t mean drinking cups of coffee while eating a grapefruit. We mean actually putting grapefruit in your coffee.

Why combine grapefruit and coffee? Here’s a hint: there may be a benefit to combining the two. You may also be surprised how much you like these two bitter flavors together.

What’s the Deal with Grapefruit?

Decades ago, doctors started putting people on diets that included grapefruit, toast, and coffee for breakfast. There’s a good reason grapefruit was a part of that diet. Grapefruit contains naringin, which is beneficial for obesity and diabetes.

The distinctive bitter taste in grapefruit comes from a flavonoid called naringin. Scientists have found that naringin may provide several health benefits.

Most clinical trials related to naringin have been on mice. Scientists fed mice a high-fat, high-carbohydrate Western diet, which caused them to become obese and sometimes develop diabetes. When scientists fed these mice naringin supplements, it helped:

The fundamental role of citrus flavonoids on human health is still somewhat mysterious because there haven’t been enough clinical trials on humans to be definitive. Plus, the concentration of naringin scientists used on mice may not be possible in human trials.

Scientists recommend consuming citrus fruit like grapefruit for its health benefits. However, naringin increases the effectiveness of some drugs and can make regular doses too high. Thus, doctors do not recommend taking any medications with grapefruit unless the drug interaction effects are known.

What’s the Connection Between Coffee and Grapefruit? 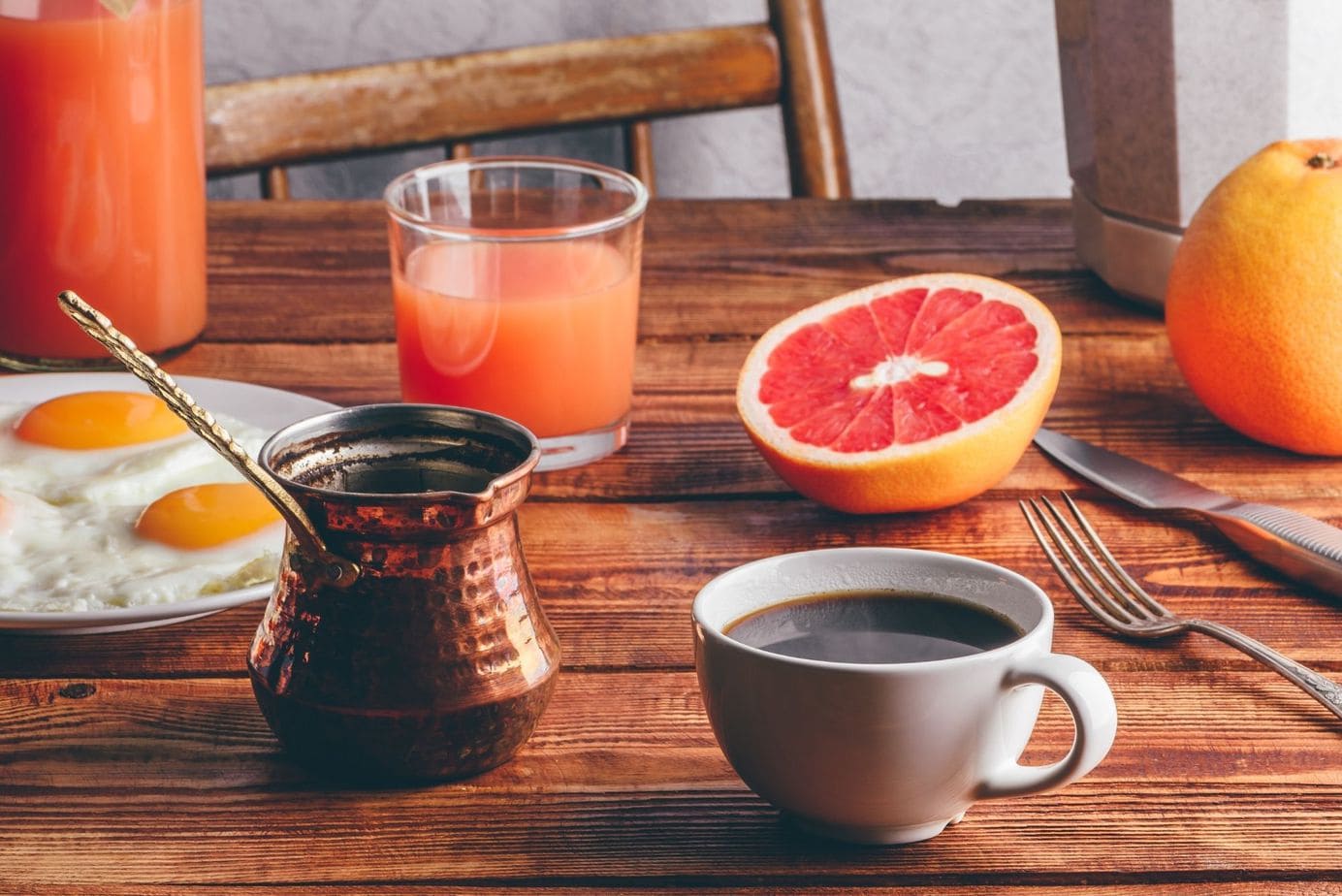 Besides its health benefits, naringin stimulates the taste buds and affects our perception of taste. Thus, some people consume a small amount of grapefruit juice before a meal to enhance the flavor.

Grapefruit may help increase caffeine levels and extend the effects of caffeine. However, studies have yielded different conclusions about whether this is true or not.

I hate to break it to you, but the rumor that combining caffeine with grapefruit can help improve metabolism isn’t true.

Adding naringin to coffee doesn’t seem to help us burn more calories than caffeine alone. Drat. But, the good news is that you’ve already been increasing your resting metabolism by drinking caffeinated coffee by itself.

How to Combine Grapefruit and Coffee

You can try grapefruit and coffee separately or try adding them together. The choice is yours.

If the idea of mixing grapefruit in your coffee sounds off-putting, don’t worry. You can eat or drink your grapefruit before or alongside your mid-day coffee if you so choose. 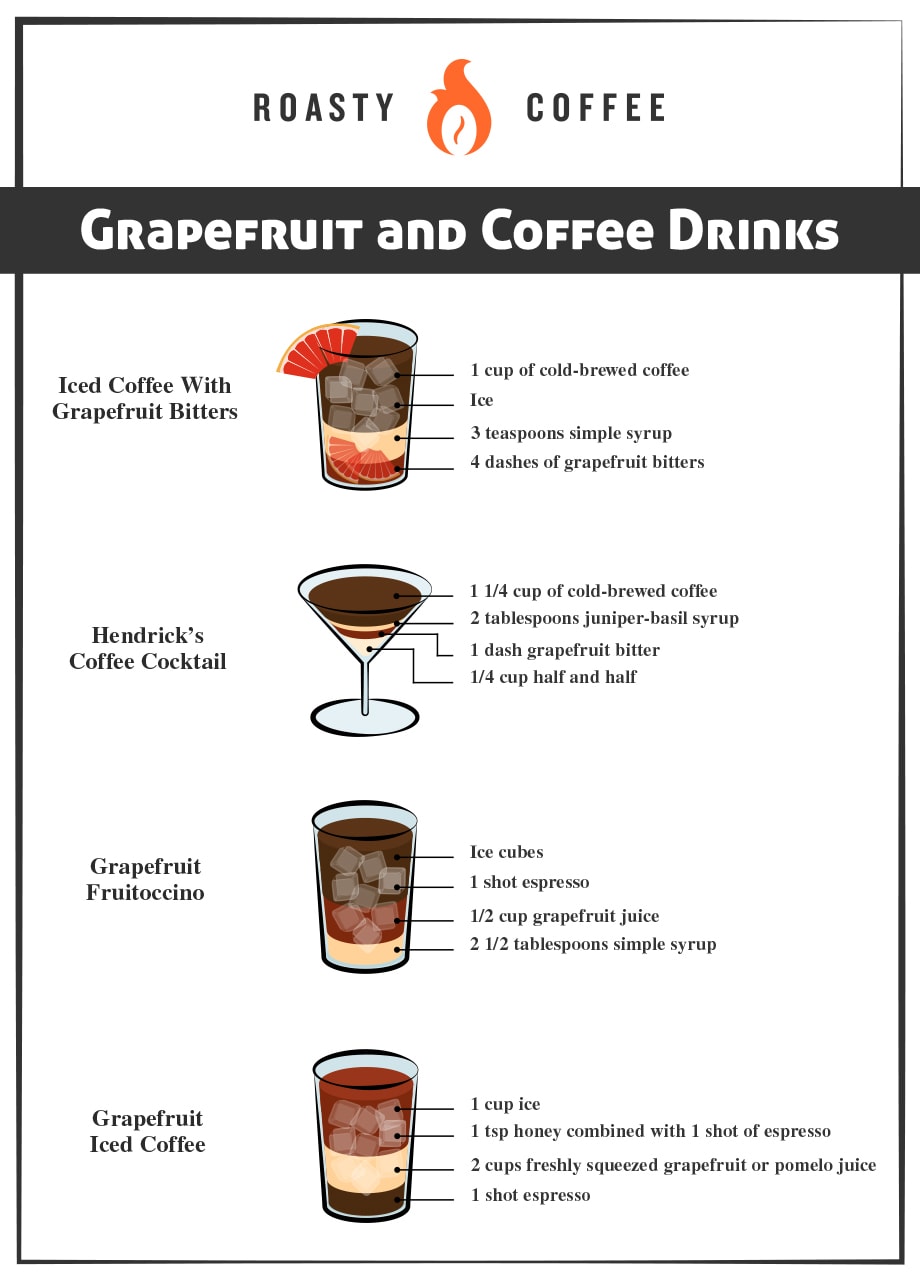 Here are a few drinks to get you started on your grapefruit and coffee journey. Remember that you may need to whisk the grapefruit juice into cream to keep it from curdling when it hits the hot coffee.

Combine the following in a glass and top with whipped cream if desired:

This coffee drink comes from Five Watt Coffee in Minneapolis and is inspired by Hendrick’s gin. If you like the bitter flavor of a gin and tonic, the coffee and grapefruit combination might be more appealing than you initially thought.

Combine the following ingredients in a drink shaker like you would a gin cocktail:

Here’s another unique layered drink that looks like a fiery sunrise. Add these ingredients to a tall glass in order, stir, and garnish with a grapefruit wedge if desired:

Layering these ingredients as listed will create a foamy layer of juice between the coffee layers:

Love Nomads sells a Hopped Cold Brew coffee mixed with grapefruit. Try combining it with sparkling water for a unique kick. The floral and lemon notes in the Ethiopian coffee combine perfectly with hops and grapefruit for a heady caffeinated kick reminiscent of an IPA beer.

Getting Your Grapefruit On

My fellow coffee drinkers, are you ready to try some grapefruit and coffee? Caffeine in coffee increases our resting metabolism. And, grapefruit may help fight obesity and diabetes, enhance coffee flavor, and enhance caffeine’s effect on the body.

That’s a lot of “mays,” so we can’t promise any specific health benefits from combining coffee with grapefruit. However, if you like coffee and grapefruit, why not try combining the two anyway? You might like it, or you might think it tastes like orange juice with toothpaste.

You can start with something simple like grapefruit juice with espresso plus cream and then go wild with grapefruit bitters if you’d like a more intensely bitter taste experience.

How to Make a Coffee Travel Kit

Australian Cappuccino: A Silky Smooth Recipe From Down South

12 Delicious Food Recipes With Coffee Grounds In Them