Jura vs. Philips: Which Is the Better Fully Automatic Option?

For cost-conscious espresso lovers, Philips makes fully automatic espresso machines that are much more affordable than Jura’s and deliver solid results. Jura is still the winner if you want high-end features, but be prepared to pay for them.

Others, like Philips, count coffee makers as just one among many products they manufacture.

We’ll look at these two brands’ features, brew options, and affordability and help you decide if one of these super autos deserves a space on your counter. 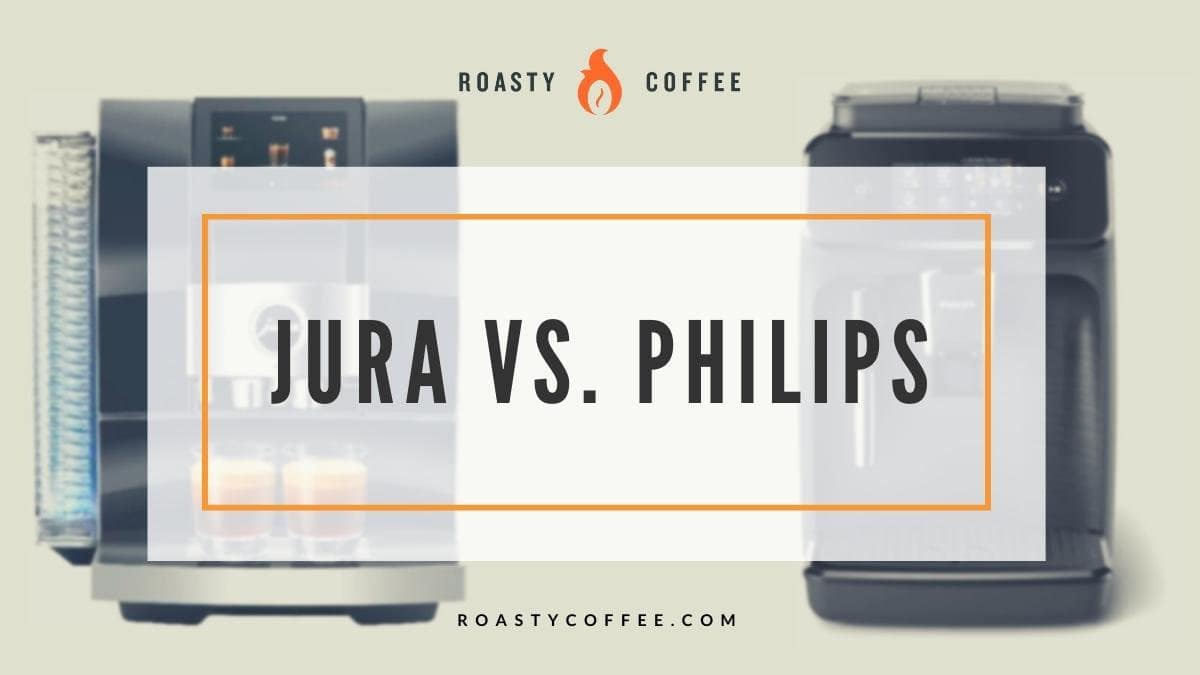 Jura Elektroapparate AG, or Jura, was founded in 1931 in Switzerland as a home appliance manufacturer.

Jura makes a range of fully automatic espresso machines, all with built-in grinders. Most, though not all, also have built-in milk frothers.

Jura is well known for producing a good shot of espresso, and part of that is due to its Pulse Extraction Process. This process uses short bursts of water to extract the best possible flavor from the ground coffee. You’ll find it in all of their current machines.

Who Is It For?

Do you want to make your espresso, latte, or other beverage by pressing a button? Do you have little interest in learning to pull a perfect espresso shot? If so, Jura’s fully automatic coffee machines may be a good fit.

What Don’t We Love?

Some home baristas prefer to get more intimately involved in their craft and, therefore, might not like the automated nature of Jura’s machines.

Koninklijke Philips N.V., often shortened to Philips, is a Dutch conglomerate corporation that was once one of the largest electronics companies in the world.

The company was founded in 1891 by Gerard and Frederick Philips. Their original product was lightbulbs, but over the years, Philips has had a hand in everything from shavers to professional healthcare equipment.

Along with a wide range of other household appliances, Philips manufactures several super-automatic espresso machines.

In 2009, Philips bought the Italian company Saeco, Europe’s largest manufacturer of espresso machines. We’ll focus only on Philips branded machines in this article, but you can read more about Saeco here.

Philips’ espresso makers are all fully automatic. They grind the beans fresh, brew the coffee, and froth the milk, all at the touch of a button.

Philips has a couple of features that set it apart from other super-automatic machines, especially at their price point. One is a flat ceramic burr grinder, which is known for being quieter and grinding more precisely than a stainless steel burr grinder.

Several of Philips’ espresso machines have its LatteGo system, a pretty sweet carafe-based milk frothing system. This system has no tubes or hoses and separates into two parts for easy cleaning.

Who Is It For?

Just like Jura’s machines, Philips’ espresso machines are a good fit for the home barista who is happy to turn everything over to the machine.

While you can make some adjustments, the machine is largely responsible for the entire brew process, and that’s how we super auto users like it.

Philips espresso machines are also more budget-friendly and might be a good choice if you want to try a super-automatic machine in the $500- S1000 range.

What Don’t We Love?

The espresso that this brand turns out to is good but not great, and some consider it a bit watery. Also, the milk foam is very dense and can’t be adjusted.

An Overview of the Jura ENA 4 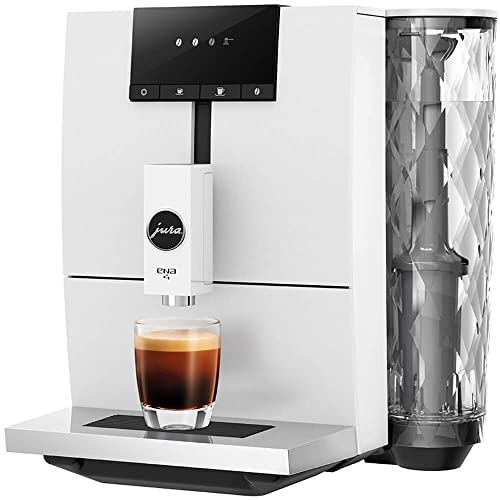 Jura Capresso Nordic White ENA 4 Full
Check Price on Amazon If you click this link and make a purchase, we earn a commission at no additional cost to you. Last Update: 2022-12-05

The Jura ENA 4 is the base model in Jura’s entry-level ENA series. It doesn’t have a milk system, so the only beverages you can brew with this machine are espresso and coffee. You can also brew a long shot or two shots back to back.

Like all Jura machines, the ENA 4 features the Pulse Extraction Process we mentioned earlier. This extracts the maximum flavor from your coffee beans and is part of why Jura machines make such good espresso.

Beyond that, the ENA 4 has a couple of other nice features, such as compatibility with Jura’s app. The app allows you to control the machine with your phone or with Siri and makes it easier to interface with the machine.

Lastly, a stainless steel conical burr grinder (what Jura calls their AromaG3 Grinder) grinds the beans fresh for every cup of coffee, and we all know how important a good grind is to the finished brew.

An Overview of the Philips Series 1200 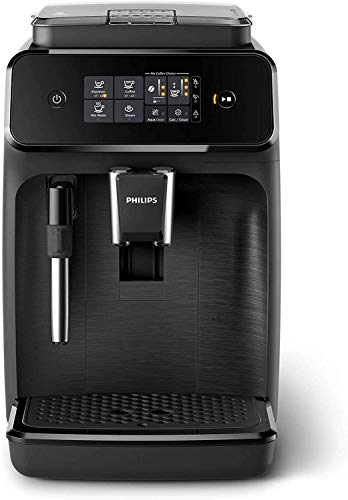 Philips 1200-Series Fully Automatic Espresso Machine w/Milk Frother (EP1220/04)
Check Price on Amazon If you click this link and make a purchase, we earn a commission at no additional cost to you. Last Update: 2022-12-05

The Philips Series 1200 is Philips’ most basic espresso machine. It can brew espresso or coffee and has a built-in steam wand that allows you to assemble a latte or cappuccino.

The Series 1200 has a built-in flat ceramic burr grinder for fresh, precisely ground beans. The grinder can be adjusted to 12 levels, and the water temperature and brew strength can also be adjusted.

If you’re looking for an entry-level machine, we think Philips is a better brand choice than Jura. Jura’s entry-level options, like the ENA 4, are still very expensive and don’t have many features to show for them. The lack of a system for milk-based beverages is especially disappointing.

The Philips 1200 isn’t the fanciest super-auto on the market, but it’s solid and much more reasonably priced.

An Overview of the Jura Z10 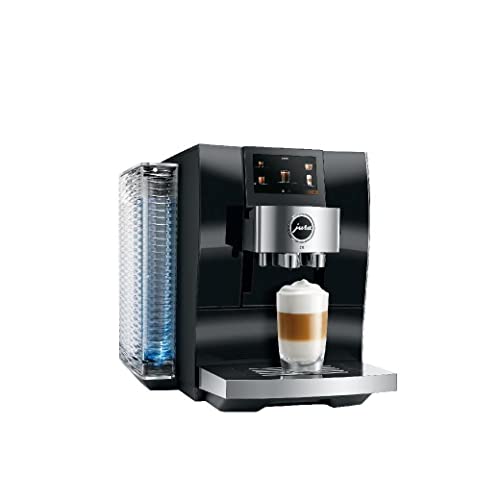 The Jura Z10 is the top model in Jura’s premium Z Series. At this level, Jura is really going above and beyond to pack in the features. You’ll pay for it, but more on that later.

This machine brews 32 coffee specialties, from classics, like espresso and cappuccino, to fun new options like the cold brew flat white. The new Cold Extraction Process that Jura has developed for this machine is part of the reason such a wide range of drinks is possible.

Another feature new to the Z10 is the Product Recognizing Grinder. We all know how important the right grind is to the quality of your final brew, and the Z10 automatically adjusts the grind settings to the fineness that best suits the beverage you choose.

The Z10 also comes standard with Wifi connectivity. I personally think the color touchscreen on the machine works just fine, but you have the option to involve your phone if you want to.

An Overview of the Philips 5400 LatteGo

The Philips 5400 LatteGo is the top model in Philips’ line of super-automatic espresso makers. It brews 12 beverages and has plenty of adjustment options to create your own.

The upside to this system is that it’s very simple to clean. The downside is that you can’t really control the type of milk foam. You’ll have to decide for yourself whether or not that’s a fair exchange.

If you want to make a serious investment in a really high-end super-automatic espresso maker, Jura’s machines will make higher quality espresso and milk foam and feature some additional technologies that the Philips machines don’t have.

If you’re looking for something at a lower price point, consider a more basic Jura machine like the E8.

At the end of the day, Jura makes great fully automatic espresso machines, but that comes at a price. A Philips coffee maker will have more features and be much more affordable for anyone looking for an entry-level machine.

If you’re looking for a high-end machine and don’t mind paying the higher price tag, you’ll find more features and more premium brewing results in a mid-to-upper level Jura machine than you will in a top-of-the-line Philips one.

How Much Does An Espresso Machine Cost?

The Best Coffee Grinder For 2022: A Complete Buying Guide

The Jura E6 vs ENA 8: Which Automatic Coffee Machine Is Best?

Baratza Sette vs. Vario: Which Coffee Grinder Makes the Cut?