The Keurig 1.0, now sold as the K-Classic, is a very basic brewer that will get your coffee to you quickly, but doesn’t have many other features. The Keurig 2.0 line, now discontinued, offered much more programmability. If that appeals, consider the similar and in-production K-Duo.

The morning alarm goes off. You snoozed one too many times, and now you’re stumbling to the kitchen in search of the first eye-opening cup of joe from your “No Talkie Before Coffee” mug.

We get it – sometimes you have to have your java, and you have to have it fast! If you’re a speed-above-all-else coffee drinker, a single-serve brewer like a Keurig might be your coffee maker of choice.

Convenient, fast, and simple to use, the Keurig has become a household name. But over time, the brand has produced a wide range of expedient coffee makers – how do you know which is the right choice for you?

Let’s take a look at two product lines – the classic Keurig 1.0 and the trendier and flashier Keurig 2.0 – and narrow down your search. 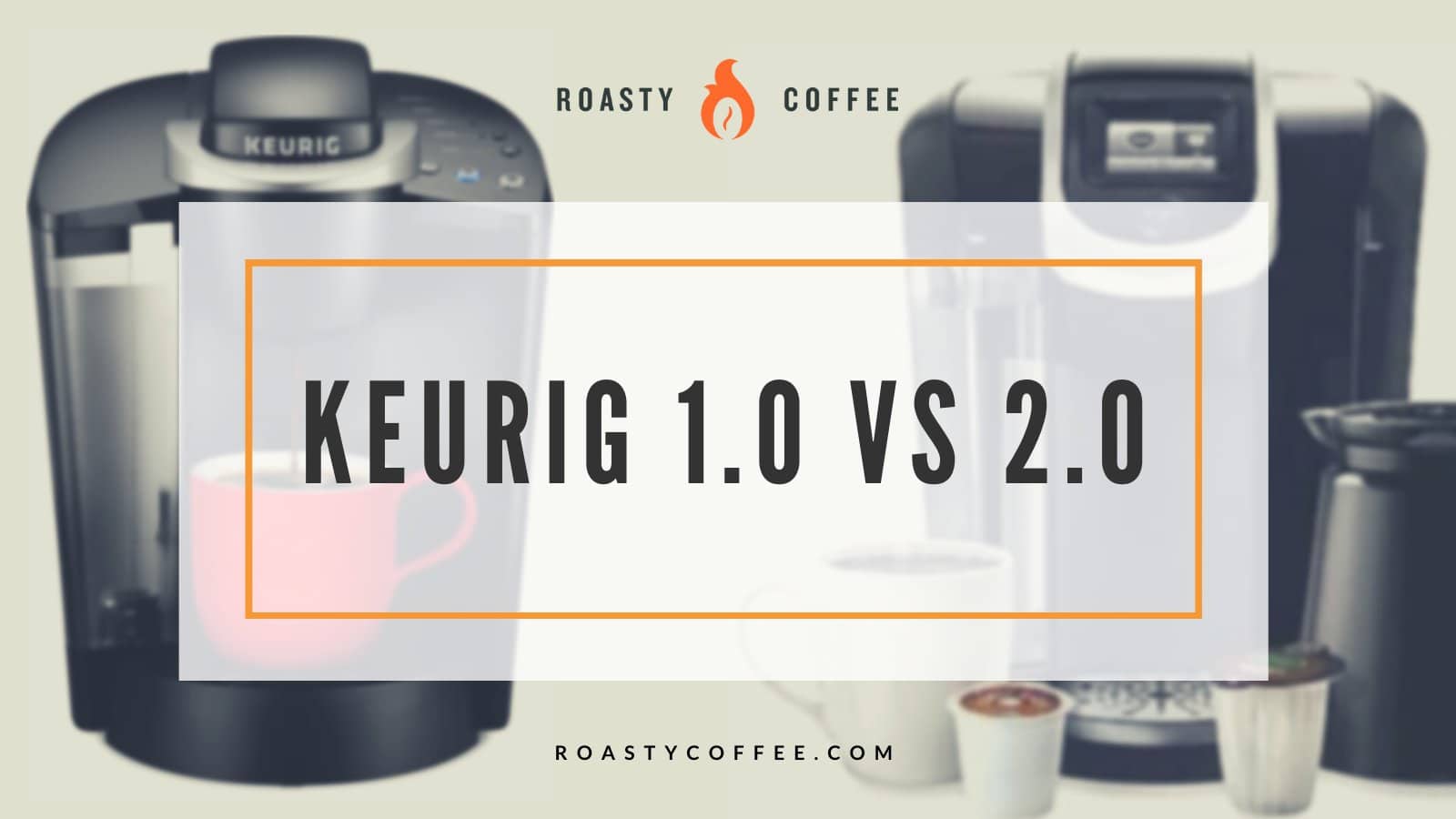 A Helpful History of The Keurig

The Keurig was developed by John Sylvan and Peter Dragone in the 1990s. The two had been college roommates in the 70s, and they came together some 20 years later to tackle the problem of office coffee.

Rather than a full pot that sat on a burner growing stale and bitter, they envisioned a system that could produce single servings of fresh coffee.

The company launched commercial models first, and models for home use followed soon after, quickly exploding in popularity.

Keurig operates under a “razor/ razorblade” business model, in which the coffee makers themselves don’t bring in a large profit, but they enable the use of many high-profit-margin K-Cups.

How Does the Keurig Work?

If you’re here considering the merits of each Keurig profit line, you probably already have an idea of how this coffee machine works. Just in case you don’t, however, here is a quick rundown.

Keurig coffee makers make a cup of coffee by driving pressurized hot water through pre-measured coffee grounds contained in a K-Cup pod. The foil top of the pod is punctured by the machine to allow the water in, and the bottom is punctured to let the coffee out.

The use of pressurized water means that the brewing process takes just seconds, rather than the minutes required by a drip coffee maker.

Keurig K-Classic Coffee Maker K-Cup Pod, Single Serve, Programmable, 6 to 10 oz. Brew Sizes, Black
Check Price on Amazon If you click this link and make a purchase, we earn a commission at no additional cost to you. Last Update: 2023-02-06

The Keurig 1.0 is the original home-use coffee machine made by Keurig, and you can still find this old favorite sold as the Keurig K-Classic.

Keurig 1.0 machines have a simpler display than their newer counterparts, and they’re operated via just a few buttons.

These coffee makers can brew 6 oz, 8 oz, and 10 oz cups of coffee. They’re compatible with any K-Cups, including third-party pods and reusable pods (a major win for the environment).

Sure, the Keurig 1.0 isn’t fancy, and it doesn’t have many features. But it’s easy and convenient to use, and that’s exactly what many Keurig users are looking for. 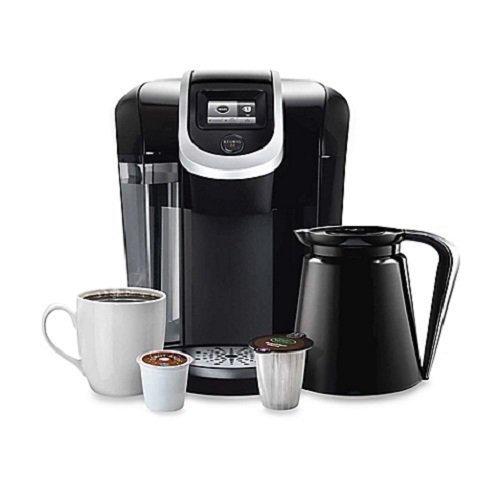 Keurig K350 2.0 Brewing System
Check Price on Amazon If you click this link and make a purchase, we earn a commission at no additional cost to you. Last Update: 2023-02-07

Keurig 2.0 launched in 2014 as a new-and-improved version of the already successful Keurig.

The 2.0 product line offered tons more features and control over the brewing process. Each 2.0 model had a touch screen, a big step up from the simple displays of the K-Classic.

There were 4 different Keurig 2.0 series, and all of them offered the user strength control settings. Three of the four also offered temperature control.

Keurig 2.0 models were capable of a wider range of brew sizes. They were compatible with K-Mug pods, which were meant to brew travel mug-sized cups of coffee, and K-Carafe pods, which did just as their name suggested and brewed full carafes of coffee, up to 30 oz.

The fly in the ointment for the Keurig 2.0 line was its pod-scanning technology.

Keurig claims the goal of this feature was to enable the brewer to identify the pod and optimize the brew size and temperature accordingly.

However, this also locked out the use of third-party pods, made Keurig 1.0 pods incompatible with the new 2.0 machines, and impeded the use of reusable coffee pods until the My-Cup reusable filter was released.

You’ve probably noticed our use of the past tense in this section. That’s because the Keurig 2.0 line was discontinued in 2019. However, you’ll find all of the same advanced features with only minor changes in the Keurig Duo.

Similarities Between Keurig 1.0 vs 2.0

At the heart of the Keurig 1.0 and Keurig 2.0 lines you’ll find many similarities.

After all, this single-serve coffee maker was groundbreaking new technology only 3 decades ago, and while improvements have been made, the core idea was and has remained successful.

Both the Keurig 1.0 and Keurig 2.0 use pressurized water that is drawn from an external water tank into an inner reservoir, heated, and then pushed through the machine using air and water pumps.

Thanks to this mechanism, both of these coffee brewers are fast. Their speed makes them attractive to busy coffee lovers in both the home and office environments.

Both product lines are also highly convenient. If you’re looking for ease of use, the simplicity of placing a pod into the machine and pushing a button can’t be beaten.

The downside of this convenience is that both products aren’t very eco-friendly, and the ground coffee contained within those pods is undeniably old and stale.

Both Keurig 1.0 and Keurig 2.0 feature an auto-on/ auto-off feature, which can be helpful when your primary concern in the morning is speed.

Despite the additional features boasted by the Keurig 2.0 line, both lines are suitable for the same type of coffee drinker: someone who values speed, convenience, and ease of use.

Differences Between Keurig 1.0 and Keurig 2.0

The Keurig 2.0 introduced many advanced settings and features that set it apart from the more basic Keurig 1.0.

First, all of the Keurig 2.0 coffee machines are equipped with touchscreens, while the Keurig 1.0 has only a basic display and is operated with a few buttons.

For those looking for more control over their coffee size, temperature, or brewing strength, Keurig 2.0 is the clear winner.

While the Keurig 1.0 product line can brew only 3 sizes of coffee, the top of the Keurig 2.0 line can brew 11 different sizes, including sizes made to fill travel mugs and full carafes up to 30 oz.

Coffee strength control is also available on every Keurig 2.0 model, and temperature control is available on all but the base model, allowing avid coffee drinkers the opportunity to get their brew the way they like it.

One huge and important difference between the Keurig 1.0 and the Keurig 2.0 is that the Keurig 2.0 was originally equipped with DRM (digital rights management) software, ostensibly for the purpose of scanning the pod to determine the most optimal brewing settings.

In reality, this software prevented third-party coffee pods from working with the Keurig 2.0.

The Keurig 2.0 line is also compatible with the now-discontinued K-Mug and K-Carafe cups, which were designed for larger brew sizes. This only makes sense if you want to be able to brew a 4-cup carafe of coffee, which the Keurig 2.0 can do, you’ll need a pod with more coffee grounds in it.

Keurig 2.0 is a better choice for those who still want the convenience of a single-serve coffee machine but also want a bit more control over elements such as temperature, the strength of coffee, and brew size.

Keurig has introduced new models since their Keurig 2.0 line was discontinued in 2019, but they’re not called Keurig 3.0.

Here is a look at our favorite Keurig models, if you’re interested in checking them out.

The Keurig 2.0 uses only pods specifically made for Keurig 2.0 machines. Pods made for the Keurig 1.0 won’t work, and neither will third-party or off-brand pods.

The Keurig 1.0 is more basic and might be simpler for those with no tech experience (Grandma, we’re looking at you!).

The Keurig 2.0 has a digital touch screen, which might feel more natural for users who are accustomed to a touch screen world.

Is the Keurig 2.0 Discontinued?

The Keurig 2.0 is discontinued.

If you’re looking for something similar, check out the Keurig Duo – it has all of the extra features that were introduced with Keurig 2.0, and it can make both single servings and full carafes.

What Are the Keurig 1.0 Models?

Keurig 1.0 wasn’t called “1.0” when they were introduced – just like World War I didn’t get its name until a second one came around.

The original Keurig brewers had a different name until the next generation of coffee makers came along.

What Are the Keurig 2.0 Models?

Within each series, the brewer stayed the same, and increasing model numbers came with more extras.

These models are discontinued, so consider the K-Duo if you’re looking for similar features and the ability to brew a whole carafe.

Which Should You Choose?

The Keurig 1.0 product line and the Keurig 2.0 product line are both great fast, convenient coffee makers that will put coffee in your hand in a hurry. However, they’re each best suited to different groups.

If you value simplicity and a more affordable price, the Keurig 1.0 (sold now as the K-Classic) might be enough for you.

However, if you want more programmability features, the ability to make different coffee cup sizes, and the option to brew a full carafe, you’re looking for something like the Keurig 2.0.

Since the Keurig 2.0 line is now discontinued (and good riddance, pod-scanning technology!), consider the K-Duo, which has similar capabilities.

Best Espresso Powder: Why it Should Be in Your Spice Cabinet

Best Coffee For AeroPress: Getting the Most from Your Brew