Americano, ristretto, and now lungo? It can be hard to keep up on the different variants of espresso that coffee shop and espresso machines have to offer.

But fear not! We’re going to give you the full run down on what a lungo is, how it differs from its fellow menu items, and even how to make it. 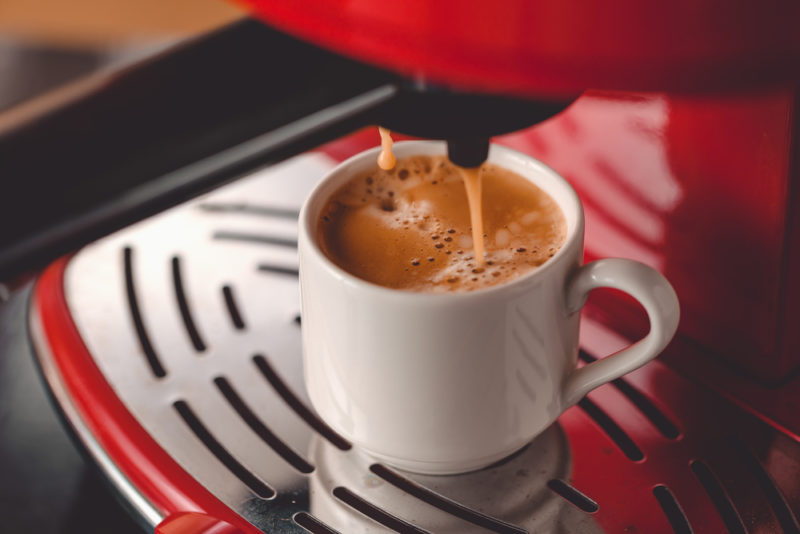 What’s in the Word?

Let’s just start with the name, shall we? The word lungo is Italian for “long,” so that should give you. a hint on what this beverage looks like when compared to the baseline: a shot of espresso. Additionally, it also indicates the amount of time needed to pull it.

So, how does it get to be “longer”? Well, it has to do with the amount of water used to pull the shot.  Usually, a shot of espresso is  pulled using about 30mL of water for 18 to 30 seconds. On the other hand, a lungo uses double the amount of water. Because of the extra water, it can take up to a minute to pull.

As a result of the increase water, there’s a significantly larger shot. Once it’s in the glass, a lungo is roughly the size of a doppio, or double shot of espresso. However, the size isn’t the only difference for this drink.

As far as making one at home, many espresso machines have a preset for it. Nespresso even has dedicated lungo pods to use for the drink. But if you have a machine that is a little more involved, make sure you are able to adjust the pull time and amount of water used. If you can adjust these two settings, you can make a lungo.

You’ll leave the other elements the same as you would for an espresso shot, including the temperature and the amount of ground. Then, you’ll simply increase and adjust the water and pull time until you hit the sweet spot right before over-extraction.

Because you use more water to pull a lungo, the taste is much more subdued than that of an espresso or ristretto (a shot pulled with half the water). However, while the drink is less strong (due to the water) it is more bitter. For some, that may sound delightful. But for others the bitterness makes this version their least favorite of the espresso variants.

This bitterness phenomenon can be attributed to the fact that most of the bitterness-causing components of coffee are dissolved later in the extraction process. So extending the amount of time needed to pull the shot, allows for more time for these to be incorporated into the brew.

However, it is important to note that a lungo is not simply a half strength shot. Because brewing involves several chemical processes, the flavor profile does actually change beyond being diluted by the water. At the end of the day, a lungo will have additional smokier, roasted notes as compared to its other espresso companions.

Plus, both beverages use the same amount of grounds, and caffeine is one of the first components to incorporate into your coffee. Therefore, there honestly isn’t much of an explanation for there being more caffeine in the lungo.

If you’re really looking for a caffeine hit, go for a ristretto instead. Most shops will only sell double shots of ristretto, so you’re actually getting a double serving of a more concentrated espresso. Or, if you’re not a fan of ristretto, try a doppio or Americano with an extra shot.

Espresso+extra water– isn’t that just an Americano? Not exactly. With an Americano, the barista is simply pulling a normal espresso shot, then adding water. Or, in the case of the long black, adding a shot of espresso to an equal part of water.

Either way, the barista adds the water after the brewing process. Thus, while the drinks are weaker in strength, they are different in flavor. The smokey notes we discussed earlier will be found in a lungo but not in an Americano, which is closer in flavor to your typical drip coffee.

We’ve already briefly discussed how a lungo differs from a regular espresso. While a lungo is still considered a variant of espresso, it is prepared differently and is vastly set apart by its taste.

Another espresso variant that we’ve discussed here that people frequently confuse with the lungo is the ristretto. While both of these drinks involve altering the amount of water used to pull a shot of espresso, the ristretto decreases that amount while the lungo increases it.

So, to put it more simply the coffee to water ratio for the different espresso shots are 1:1 for ristretto, 1:2 for espresso, and 1:4 for lungo.

This mix up is due to the names rather than similarities between the drinks themselves. A latte is an espresso and milk based drink that involves pouring steamed milk and milk foam over a shot or two of espresso. Meanwhile, a lungo is an espresso variant.

So, while these are typically two separate drinks, you could potentially replace the typical shot with a lungo IN a latte if you wanted to explore a different flavor profile.

So, the question of the hour is: Should you try a lungo?

If you’re into the smokier, earthier notes of espresso, a lungo is definitely a great drink to try. Also, if your go-to is an Americano, replacing the usual shot or shots with a lungo might suit your tastes.

On the other hand, if you’re usually one for sweeter concoctions, this one might not be a winner for you. However, if you are still interested to try it in some capacity, try using it to replace the espresso in another drink, such as a cappuccino or a latte macchiato (NOT an espresso macchiato).

Can You Put Marshmallows in Coffee?