Moka Pot vs. Espresso Machine: Which Is Right for You?

There are many coffee options out there, and as drinkers get more into what they are drinking, each style is becoming more distinct and known for its unique attributes.

These days a shot of espresso is seen as the standard because it’s what is used in most cafes as it brings out the characteristics we like. But in the home, a Moka pot resurgence is competing with kitchen espresso machines for its depth of flavor and strength.

Once very common, Moka pots fell out of fashion, taking a back seat to the explosion of home espresso and pod machines. While attention settled on espresso as the aficionado’s choice, Moka pots sat in the back of cupboards awaiting their day to return.

Now, an undercurrent of devotees is grinding specialty beans to match the peculiarities of the Moka pot, bringing it back into the public eye as a style of its own rather than the poor cousin of proper espresso.

Moka coffee is made with a Moka pot, a stovetop coffee maker often called a stovetop espresso maker that sends heated water through a large puck of ground coffee, quickly extracting it with moderate pressure. It is an elegant design perfect for the home, and it brews a strong cup of coffee with a deep flavor that goes well with milk. 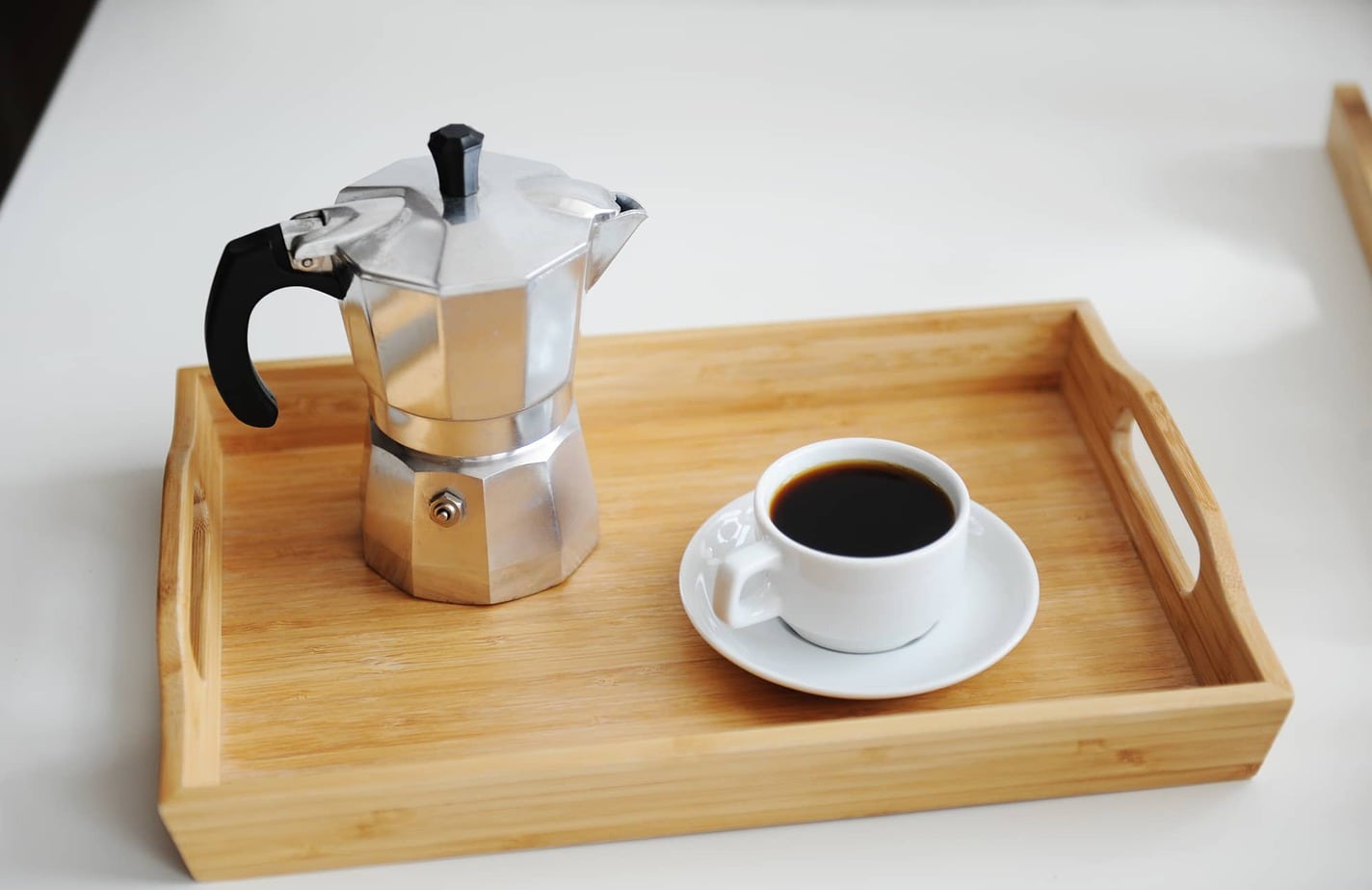 Espresso is a small shot of strong, concentrated coffee, high in oils and flavor, made with a sophisticated machine that forces a small amount of near-boiling water under a lot of pressure through a small amount of coffee. A short extraction time and the release of the coffee’s oils makes a richly flavored extraction that is excellent alone or as a base for other drinks like lattes and cappuccinos. 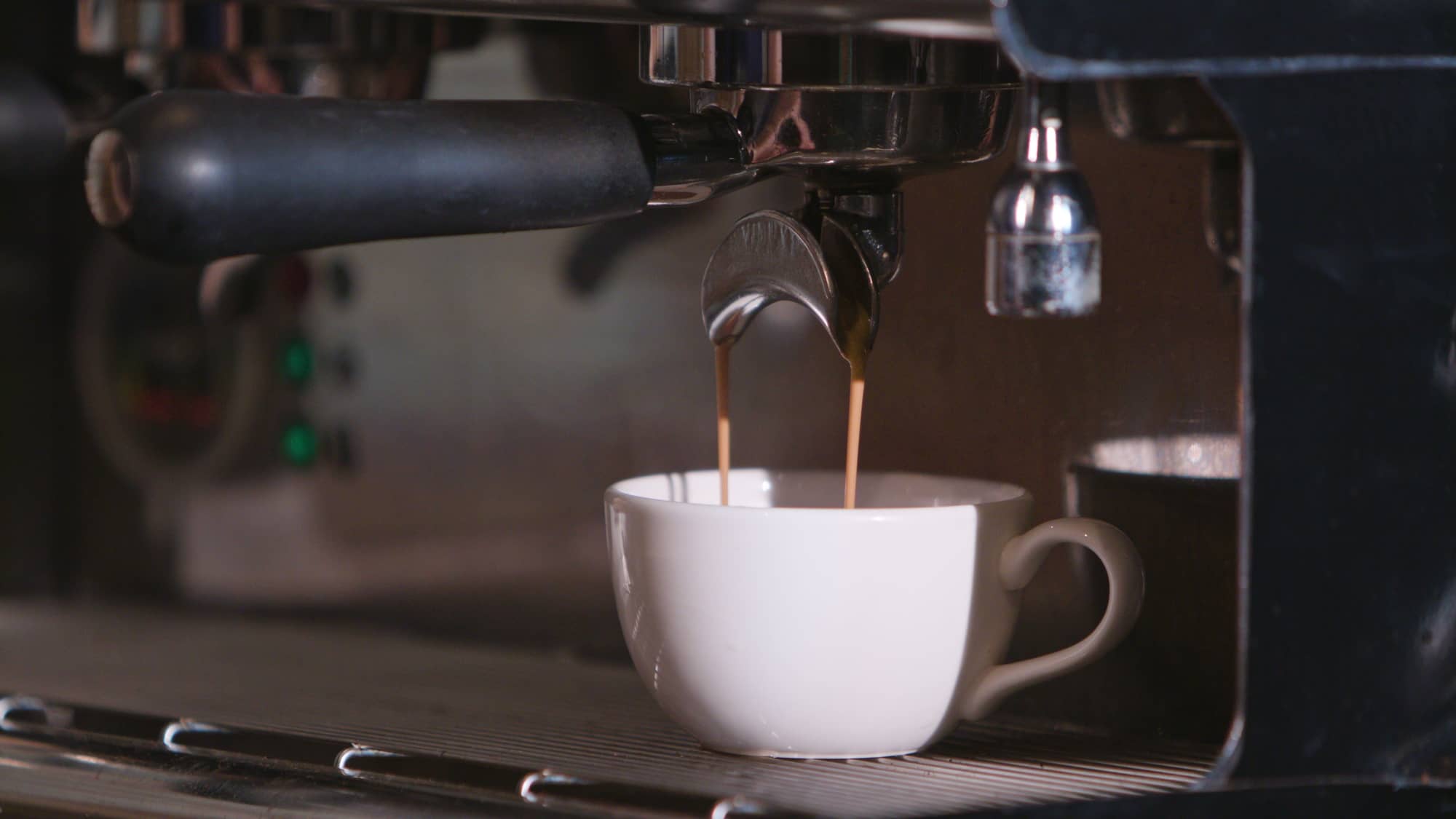 Does a Moka pot make espresso or coffee?

Moka pots make something in between that is strong and dark, much like espresso, but in amounts like drip or French press coffee. There’s no crema to speak of, so it needs milk to give it body, but it has a depth of flavor like espresso that can be earthy and complex.

Per weight, espresso has a much higher caffeine concentration, but as you drink it in smaller quantities, it has less overall. Espresso is brewed in shots created by the machine. Moka pot coffee usually comes by the cup, which would be another level of challenge to drink if it were espresso.

Espresso is the choice for a quick hit in the morning, with about 120 milligrams of caffeine straight to the system. Moka is the choice for long mornings that need serious fortification, like going skiing or a long drive. When drunk as standard cups of coffee, it will give you around double the hit of caffeine of espresso.

Moka pot coffee is not true espresso. It can’t be because the brewing process isn’t the same. But this doesn’t detract from it being its own unique thing with its complex flavors and style.

Authentic espresso is extracted from finely ground, specifically roasted beans, with around 8-10 bars of pressure for about 25 seconds. Change any one of these elements, and you start to waiver from espresso. Change all of them as Moka pot coffee does, and you have another delicious coffee type.

The tell-tale thing that makes Moka coffee different is the near absence of the crema that is the signature of an espresso shot due to the much higher pressure involved. Moka pots extract under only about 1.5 bars of pressure, which pulls out less of the oils but infuses longer for a depth of taste espresso doesn’t have. 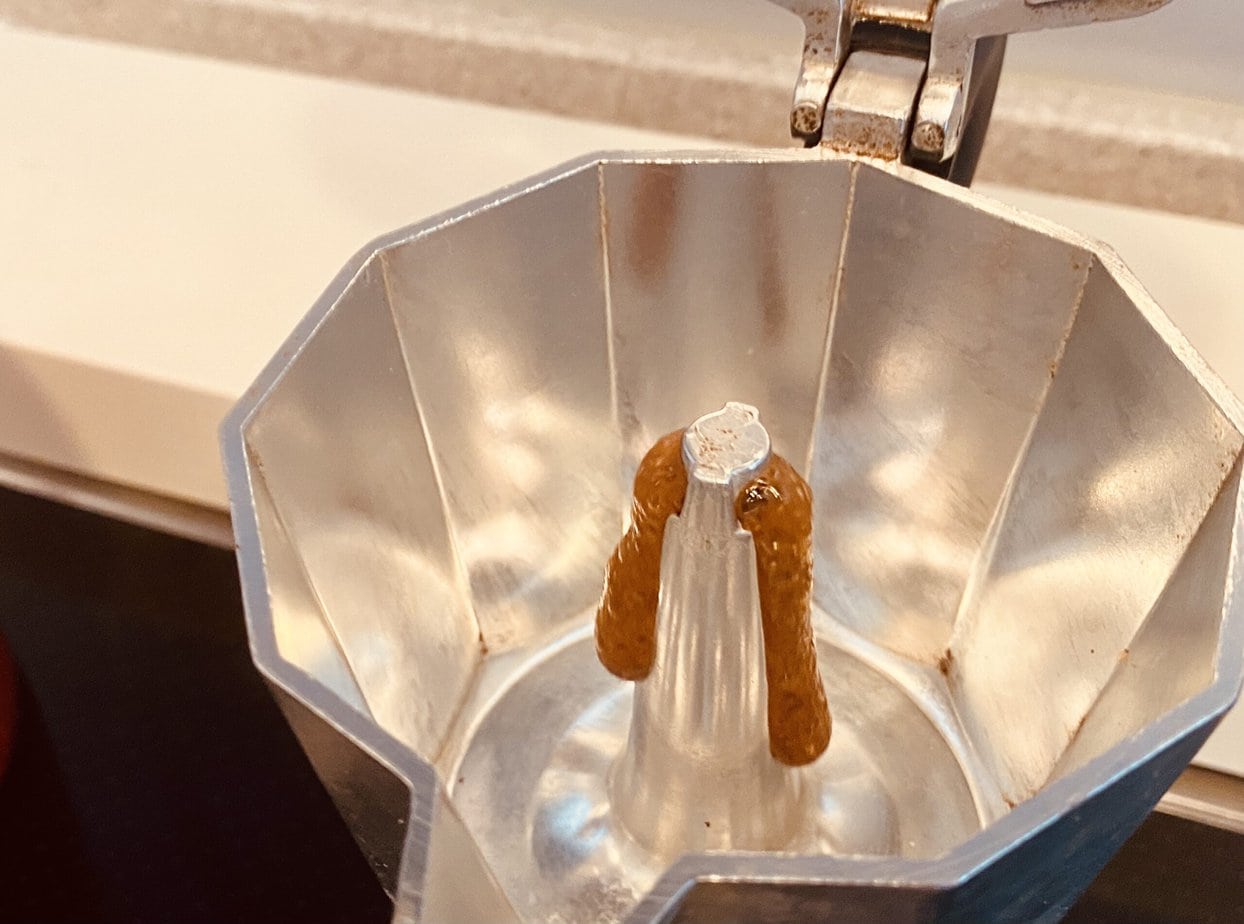 When brewed correctly, Moka coffee is as good as any other coffee and, for some things, is arguably the best. As always, what you drink is half the result of the coffee you use. Moka coffee is a little more tolerant of imperfections as it relies less on the bean’s oils and puck preparation.

Moka excels with big flavors and simple additions like milk. Because of the minimal oils, it’s not ideal for sweeteners, which can taste thin and metallic unless milk is added to bind them and make a fuller taste. Moka pots are a good alternative to French Press, with a deeper flavor that’s more roasty, carrying richer and stronger with milk.

Moka pots make Moka coffee with its own distinct style that, though it may share some characteristics with espresso, is still all it’s own. Smaller pots give you a small glass, little more than a shot of coffee, and the standard 6-cup pot turns out a full cup you consume as a long drink.

Where espresso has its crema that is half of its character, Moka doesn’t, so if it is drunk as a shot, it is less rich and less sweet. Moka works best by the cup, where its full flavor can be found, drunk over time as it cools.

Due to the dark roast, the coarser grind, and the shorter extraction time, Moka coffee tastes closer to true espresso than any other style, but it still brings out unique flavors that set it apart.

Moka doesn’t extract as much of the oils. Instead, it only releases a thin swirl relative to the much greater volume, meaning the sweetness isn’t there. However, the deep earthy flavors of the coffee are expanded due to the Moka pot’s expanded range of extraction. 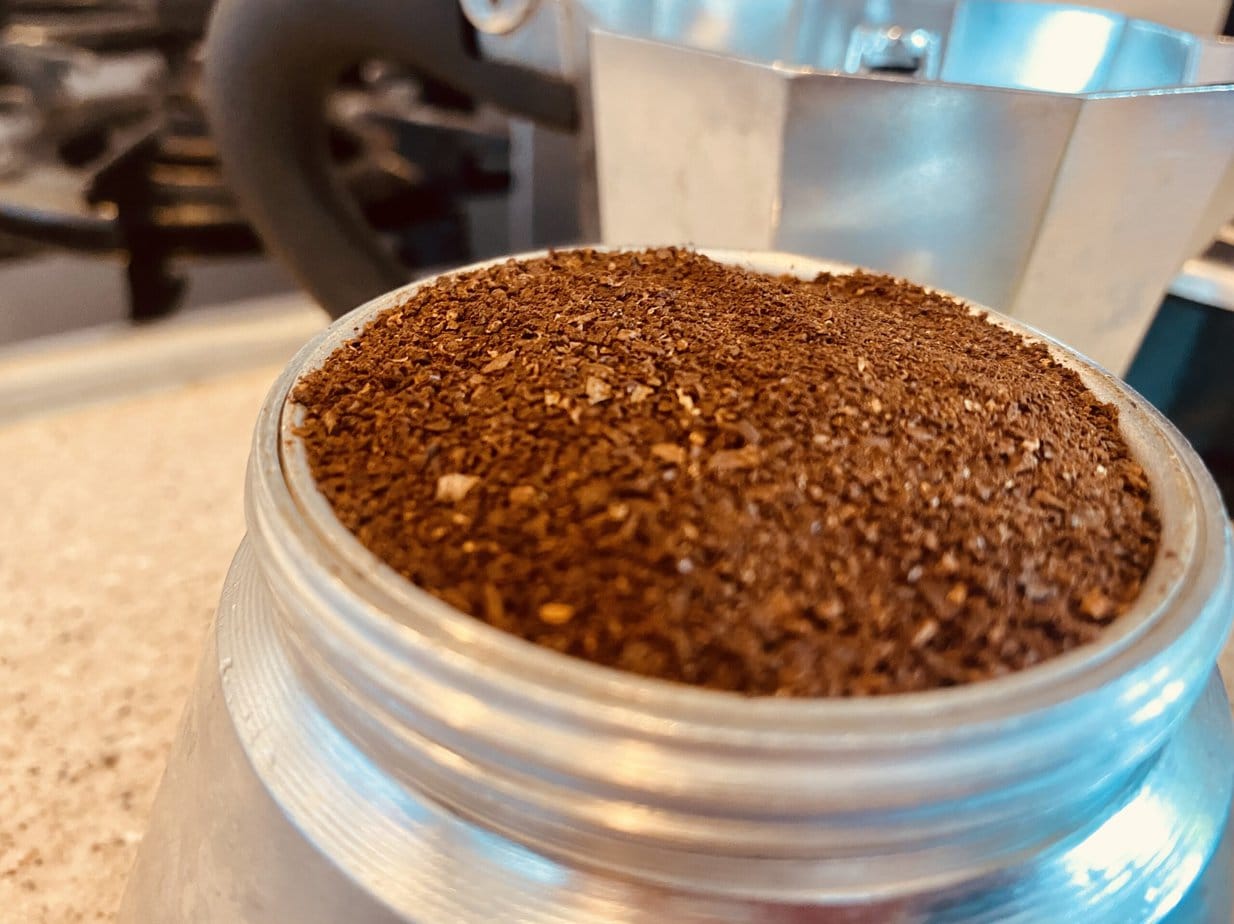 Part of the dark horse reputation of the Moka pot is that it’s rare to see beans and coffee grounds just for this coffee brewing method, sometimes leading to the less-than-great results that gave Moka its reputation as unreliable. Even a long search brings up few results, with little said about the specifics, which is surprising when compared to the volume of detail about espresso.

Moka pot coffee places much responsibility on the beans and grinds because you have relatively limited control of the extraction. The wrong beans or coarseness can easily over-extract the coffee or, worse, form too much pressure that scorches the puck and leads to sputtering.

The best beans for Moka are medium-dark roasts with lots of body but not shiny with oil. The moderate pressure and extraction time won’t pull out the taste of the lipids, and a roast that’s too light might taste over-extracted and sour. Espresso beans are too dark and oily for Moka, as they cater to a flavor profile it just doesn’t capture, and the coffee can be sour and flat.

Moka pot pucks are large and extract in the middle of the spectrum, so they should be dense under their own weight and not tamped. They rely on the pressure the grind creates as it expands against the filter to produce the water pressure needed to release flavor.

The absence of true tamping but much greater mass calls for a grind coarser than espresso that builds the correct pressure but doesn’t clog the system. the grind size is around two-thirds of the way between espresso between and regular drip coffee grind. It’s then simply tapped into place with a slight press to finish level with the filter basket.

Moka pots and hand-pumped espresso coffee machines make their way around the world, but nothing beats a Moka pot for ruggedness. Where even the most refined hand-espresso sets are made up of multiple parts that can suffer the ardor of travel, Moka pots regularly are seen in places like an Everest basecamp and on safari. They can even be used on open fires.

Advantages and Disadvantages of Each 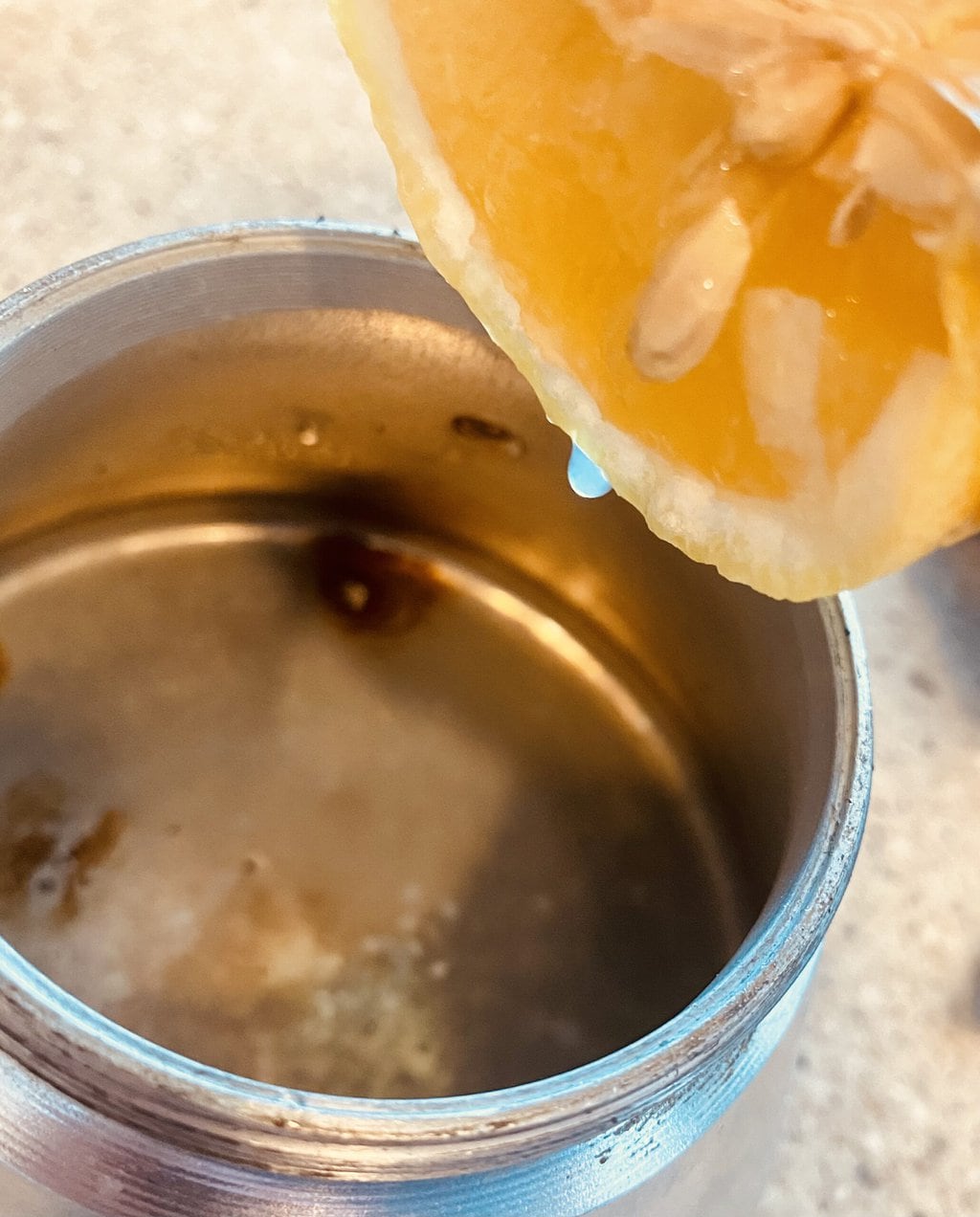 Drinks You Can Make

There’s much overlap between the two, but both have their specialties that bring out their best.

Moka pots and espresso represent each end of the price spectrum, with even the finest Moka pots coming nowhere near the cheapest espresso machines.

Now you’re thinking. You know you’re a real coffee lover if your immediate thought when you read this article was to have both. For once, this wouldn’t be excessive or the sign of an addict, as it will expose you to the full breadth of expressed styles and characters.

First thing in the morning, you cannot beat authentic espresso to bring color to the day and get your energy levels up. Likewise, espresso can’t be bettered for a quick lift during the day when other things are happening, and you don’t need distractions.

Moka works best as espresso’s long-range and even-tempered sister if you like to drink over time or have an activity ahead that needs coffee constantly at hand. Moka is the choice of a table full of friends, a cold morning commute, or around the campfire.

How To Store An Aeropress: Safest Way For Longer Use

How Does Starbucks Decaffeinate Their Coffee?