Why Does My Keurig Have a Phone Jack? And Can I Use a Smart Plug?

The Keurig 2.0 line has a phone jack built into it, but nobody knows exactly what it’s for. Read on to learn what we think. We’ll also describe the correct way to connect your brewer to power depending on whether you have a 2- or 3-prong power cord.

Keurig has solidified itself as one of the easiest-to-use coffee brewers on the market, but that doesn’t mean your brewer isn’t still a sophisticated piece of technology.

While the Keurig is still years away from being the newest must-have item for a high-tech smart house, they still have a few tricks up their sleeve. Like a mysterious phone jack on the bottom of your brewer. Or wifi connectivity with your smart plug.

If you want to understand better what the various ports on your Keurig are for or how the electricity powering your coffee brewer works, you’re in the right place. 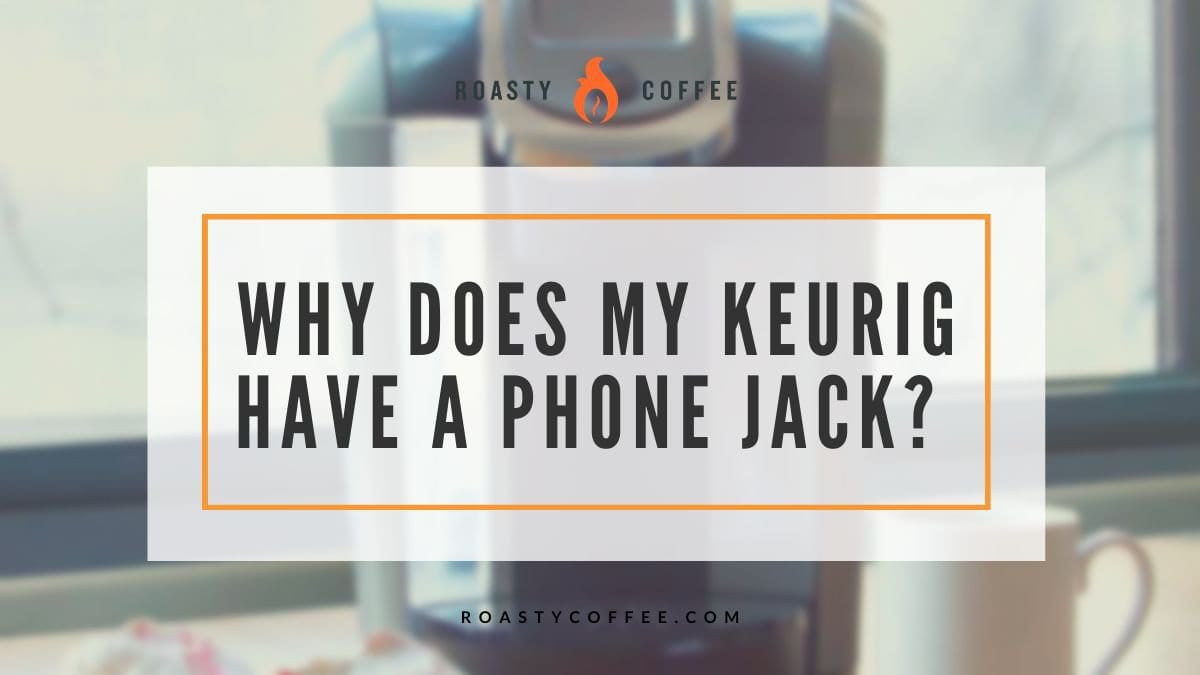 Where is the phone jack on my Keurig?

Alright, the title for this article might have been a little misleading. The mysterious port you might find on your Keurig isn’t technically a phone jack, but Keurig describes it as being similar to a port you’d plug a landline in at your home.

You won’t find this port on all Keurig models since it’s only included on Keurig 2.0 models. If you have a Keurig 2.0, you can locate this port toward the bottom of your machine. It most likely is located in the middle of the drip tray holder.

If your Keurig is not part of the 2.0 line, you most likely will not have a port on your machine.

What is the purpose of the port?

Most information you’ll find online about the mysterious port on your Keurig is speculation. Some people believe its purpose is for servicing your Keurig, while others think it’s hinting toward future phone connectivity, so you can start a brew with a phone call. What?!

Keurig claims the port was included on 2.0 model brewers to allow an accessory to connect and give the brewer internet connectivity in the future.

Keurig made these claims in early 2017 and has since discontinued their 2.0 line brewers. Newer Keurig models don’t appear to include this port, so it’s unclear if Keurig still has future plans for brewer internet connectivity.

Why does my Keurig have a three-prong plug?

Essentially, the ground wire in three-prong plugs redirects any surge of electricity your appliance experiences and allows it to flow safely into the ground. Plugs with only two prongs don’t have this extra precaution, meaning you’re at a higher risk of electrical fire or damaged electronics.

Keurig machines have a three-prong plug, so they are grounded, and your machine is protected from an excess surge in electricity. This is especially important in a kitchen appliance, like a coffee brewer, because these appliances are more likely to be exposed to water. The third prong gives your Keurig extra protection.

Is it safe to plug a Keurig into an extension cord?

Your first option for plugging in your Keurig brewer should always be to an outlet, but if that isn’t possible, it is safe to plug a Keurig into an extension cord if it’s done with caution.

Can I use my smart plug with my Keurig?

A smart plug is the newest smart home gadget used to automate your home’s wired devices. Once it’s set up, you can easily turn on various appliances in your home from the convenience of your phone or tablet.

If you see various ports or jacks on your Keurig, they might scare you into thinking the Keurig is too technologically advanced for the average user – but that’s far from the truth.

As an average coffee drinker, you probably won’t need to know how every jack or cord works, but still, it’s nice to understand how your Keurig brewer functions.

Most Caffeinated Cities: Where is Pumpkin Spice Latte the Most Popular?

How To Order Espresso