Any good cup of morning coffee has a fresh, smooth, and overall consistent taste. But finding a coffee grinder that delivers finely-ground cups of coffee is a difficult task. Every coffee connoisseur knows that the correct grind for your brew method is essential.

Today, we’ll review two common coffee grinders: the Breville Smart Grinder Pro vs. Baratza Virtuoso, so you can choose the right coffee grinder for you.

Breville was founded in Sydney, Australia, in 1932. Since its launch, the coffee company has delivered high-grade kitchen appliances to homes worldwide, reaching a consumer base that includes over 70 countries.

One of the biggest reasons the company is so successful is its dedication to customers and constant innovation of its products.

The reputable coffee company aims to make life easy with whatever products they produce, and they’ve been successfully doing so for generations.

Comparatively, Baratza is a more recently founded coffee company, headquartered out of Seattle, Washington. They named themselves after the Arabic term “baratza” which, translated from Swahili, means “a place where locals gather to drink coffee.”

Since its official founding in 1999, Baratza continues to be a favorite among households, particularly for its coffee grinders. Even industry professionals admit they own a Baratza machine at home.

Both Breville and Baratza boast the ownership of some of the highest quality coffee grinders and are in direct competition with each other. Now that we’ve given you a better understanding of the companies, let’s compare these two coffee giants’ grinders: Breville Smart Grinder Pro vs. Baratza Virtuoso.

The Breville Smart Grinder Pro features a durable plastic body with a stainless steel brushed finish. The conical burrs are made of stainless steel and offer 60 different options to give you perfect grinds every time.

The LCD is very user-friendly and lets users easily control the number of cups or shots they want to make.

Similarly, the Baratza Virtuoso also operates with the conical burr method of grinding, but only features 40 grind options. Despite its lack of features, it has a more sleek, modern design.

The top and base of the machine feature sculpted metal which adds a touch of class to the grinder. Additionally, like the Breville, the display includes a digital timer so you can adjust the number of cups or shots.

Simply put, the Breville Smart Grinder Pro and the Baratza Virtuoso are more similar than they are different. But one of the key differences is the overall quality of the grind motor.

For example, the Baratza Virtuoso motor lasts longer compared to the Breville Smart Grinder Pro. Of course, there are specific methods users can employ to avoid this issue. Instead of running it for one extended period, the grinder has a 60-second timer, giving you more options for grind time,  and can operate in brief 0.2-second intervals if required.

However, it’s worth noting that this method quickly becomes tedious.

The Baratza Virtuoso experiences very few interruptions while operating at a higher grind speed. Baratza specifically aims to create products that are long-lasting and durable, and their grinders are no exception.

The pieces that need the most attention are the burrs, which might require replacement after several years. 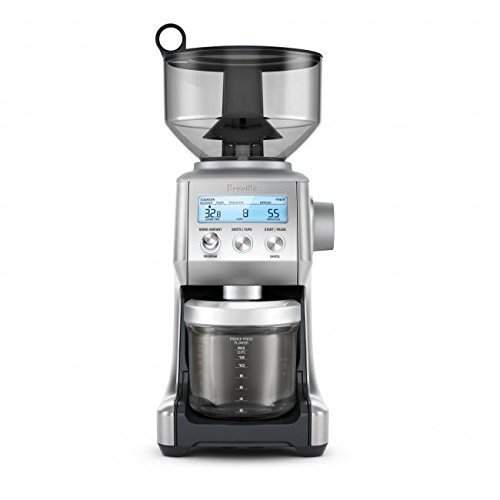 Breville RM-BCG820BSSXL The Smart Grinder Pro Coffee Bean Grinder, Brushed Stainless Steel (Certified Refurbished)
Check Price on Amazon If you click this link and make a purchase, we earn a commission at no additional cost to you. Last Update: 2023-01-26

With 60 grind settings, the Breville Smart Grinder Pro grinds fresh beans with a good grind consistency to create dozens of beverages. The settings allow you to adjust the grind size according to your brewing method. It has settings for a coarser grind used for Aeropress coffee, and a finer grind for espresso to enhance the flavor profile and really bring out those coffee flavors.

It also has a digital counter that lets you choose your grind time.

Additionally, it allows users to choose between cups or shots, a great convenience feature. You can prepare your brew with a precise amount of ground coffee without wasting extra beans.

The Breville lets you deposit your fresh grounds directly into a portafilter, filter basket, or coffee filter. This coffee grinder works exceptionally well with an espresso machine so that you can grind your coffee to a more accurate dosage.

Baratza Virtuoso+ Conical Burr Coffee Grinder with Digital Timer Display
Check Price on Amazon If you click this link and make a purchase, we earn a commission at no additional cost to you. Last Update: 2023-01-26

Featuring 40 grind options, the Baratza Virtuoso is a modern programmable coffee grinder that lets users prepare coffee at an adjustable and accurate rate for consistent grinds every time. With the digital display screen, coffee lovers can easily and quickly prepare coffee grounds without unnecessary waste.

It has a small 8-ounce hopper, but with the hopper extension, you can double its capacity.

While it doesn’t feature a portafilter cradle, the Virtuoso does offer a fast grinding speed with a powerful motor and adds a sort of elegance to any kitchen counter it sits on.

People can even watch as the machine grinds coffee with Virtuoso’s backlit grounds bin.

While both the Breville Smart Grinder Pro and the Baratza Virtuoso are excellent coffee grinders with dozens of settings, there can only be one winner.

When it comes to overall quality, grind speed, and affordability, the Baratza Virtuoso coffee bean grinder comes out on top. Even though the Breville Smart Grinder Pro includes more added features, the Virtuosos remains a classic, practical, and dependable grinding machine you’ll use to make a great cup of coffee.

The Baratza Virtuoso features a much higher grinding RPM, which results in faster, more precise coffee grinds. At a speed of approximately 2 grams per second, the Virtuoso also out-grinds the Smart Grinder Pro, which has a grinding rate of 1.5 grams per second.

Additionally, the faster grind speed of the Baratza Virtuoso contributes to the longevity and efficiency of the machine’s motor.

And while the Breville Smart Grinder is a decent burr coffee grinder with a certain appeal, the Baratza Virtuoso has a more straightforward, more stylish look.

The Breville Smart Grinder’s burr doesn’t last nearly as long as the Virtuoso and requires much more frequent part replacements.

If you’re a beginner, Breville’s smart features might prove to be more helpful. But most customers tend to look for an affordable piece of coffee equipment that does the job and lasts a long time—and Virtuoso certainly meets those demands.

Now you can create café quality coffee at home with the Baratza Virtuoso grinder.

Coffee Milk Powder: How To Use It In Your Coffee