Cascara. Come on, say it out loud; don’t you just love how it rolls off your tongue? Fun, right?

Now you’re probably wondering what that word means, especially since we just made you say it. Cascara is Spanish for “shell” or “husk,” a definition that makes perfect sense as it refers to the skin of a coffee cherry fruit, which is where coffee beans come from.

Most coffee lovers already know that removing the fruit’s skin after the coffee harvest is an essential step in every coffee processing routine, but the cascara isn’t just a byproduct of coffee production; it can make a pretty dang good cup of tea! Yep, you read that right: despite coming from the coffee plant, brewing cascara produces tea, not coffee.

But how? What does it taste like? Is it good for you?

Have all these questions piqued your cascara curiosity? Good! Keep reading to find out more about this exotic drink!

But before you dive in…

There’s something you should know: cascara coffee cherry tea is often confused with cascara sagrada, which is dried tree bark shavings that you can also steep for tea. But cascara sagrada is most often used in dietary supplements. Despite having the same name, they aren’t the same thing. To make things as clear as possible, we’re only focusing on the version of the drink made with the fruit of the coffee plant.

The best way to safely purchase cascara (or any coffee product, for that matter) is to read the label carefully before you buy it, so you know what you’re about to put into your body!

Where Cascara Comes From

Everyone loves a good origin story, and like everything else in the world, cascara’s got one. Since coffee beans originated in Ethiopia, the motherland of our favorite delicious beverage (coffee, duh), that means cascara was born there, too.

In Ethiopia, coffee growers roast the coffee cherry skins until they’re almost black. Then, they’re steeped in water for an extended time until they give the liquid an intense and fruity taste. The resulting tea is called Geshar or Hashara.

Once the beloved coffee bean made its way to South America, tea drinkers took a different approach to brewing a yummy cascara drink. You’ll find this drink consumed in Bolivia, where it’s called Sultana. There, the fruit is sun-dried before coffee roasters lightly toast it. From there, they grind the dried and roasted husks into ready-to-brew tea that is boiled in water and steeped with cinnamon, cloves, and sugar. Just a few minutes later (steep times depend on how strong the brewer wants the cup’s contents to be), there’s a sweet cup of tea.

You can also find a variation of this drink called Qishr in Yemen,  and made with coffee cherry skins, cinnamon, ginger, or caraway.

Your favorite specialty coffee shop makes cascara tea in a very similar way by steeping dried coffee skins in hot water. But, since the stuff is still relatively new to the United States, there isn’t a set-in-stone brewing method as far as water-to-tea ratios and steep times are concerned; it all comes down to preference. 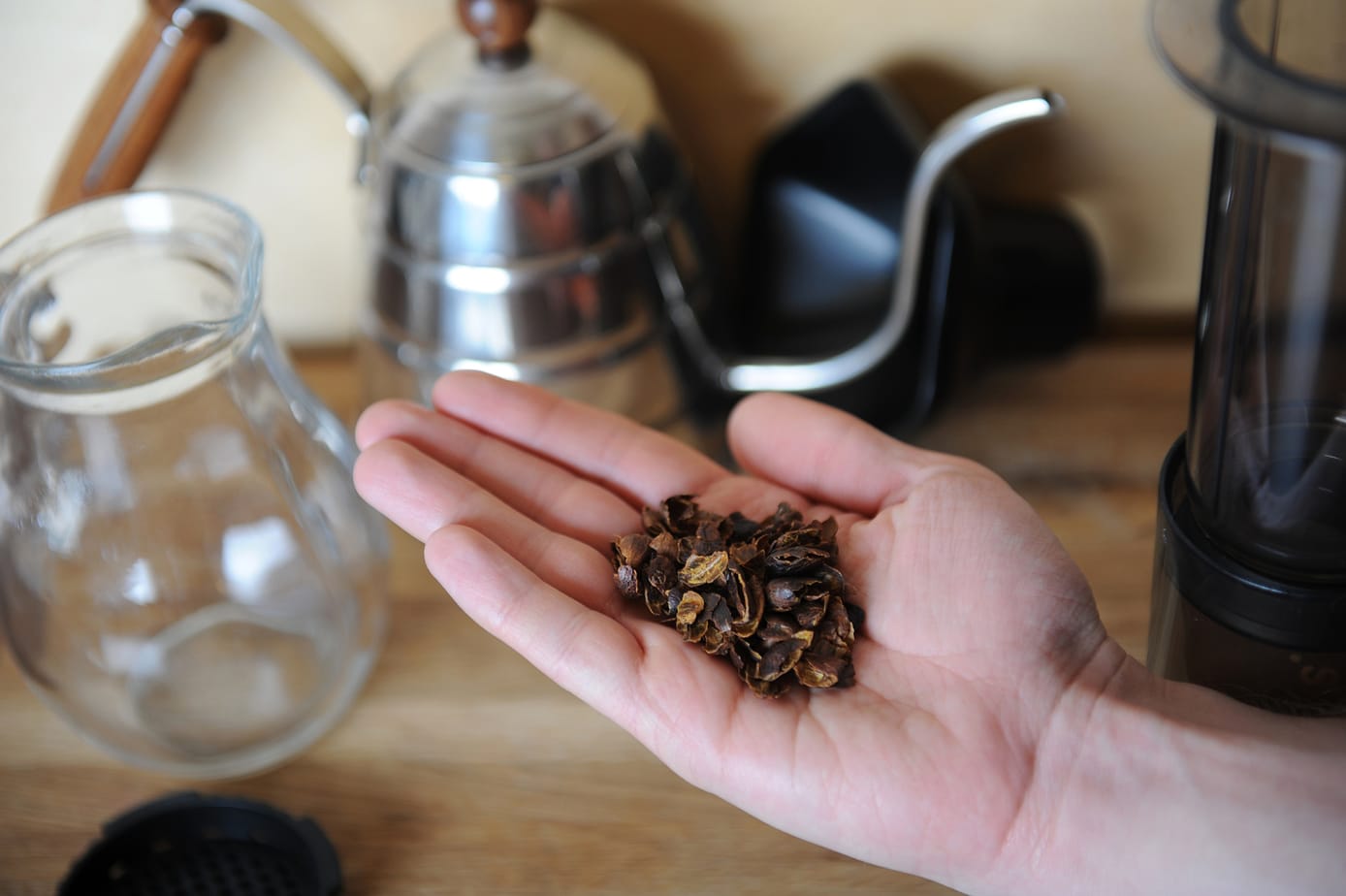 Can you eat raw coffee cherries straight from the plant? You can, but they’ve been described as edible and not-so-incredible. Cascara, however, is quite delicious.

It has both fruity and herbal notes when it’s brewed, which is why it’s a popular addition to teas, syrups, sodas, beer, or even vodka (happy hour, anyone?).

When made into a simple syrup, cascara becomes sweet. It tastes like a mixture of fruits and herbs, including notes of rose hip, hibiscus flower, red currant, mango, and sometimes even a hint of tobacco. Some even describe cascara syrup’s flavor as a combination of cherry and brown sugar.

The fruity-tasting coffee cherry tea is known for its antioxidants, specifically polyphenols. Long-term consumption of polyphenols has been linked to the prevention of cancer, diabetes, cardiovascular disease, osteoporosis, and neurodegenerative diseases.

Cascara tea has a significantly lower caffeine level than a regular cup of coffee. Still, since it does contain a bit of the natural stimulant, it’s important to note that long-term use can produce restlessness, nervousness or anxiety, or a headache.

Because more and more businesses started sourcing cascara from coffee farmers, its popularity increased, and using the coffee fruit’s outer skin in beverages became more common worldwide. What was once seen as waste was suddenly in high demand; increased desire for the skin of coffee fruit has, in some cases, led to the dried husks commanding higher prices than the whole bean coffee.

Starbucks is one of the many businesses that began using cascara. In previous years, the brand used the fruit skins as fertilizer, but in 2017, the company discovered a new and improved means of using the stuff: putting it in the coffee.

Starbucks’s first new drink of 2017 was the cascara latte, a slightly sweet, creamy beverage that’s a combination of cascara syrup, espresso, steamed milk, velvety microfoam, and cascara sugar. The company even added cascara cold foam to the menu, a sweet way for coffee drinkers to top their chilled, icy brews.

Unfortunately,  the well-known coffee supplier has discontinued cascara-infused drinks, so if you’re trying to get your cascara fix, you’ll need to go elsewhere to find it.

Cascara Questions You Should Know the Answers To

What is cascara sugar?

If you purchased a cascara latte from Starbucks Coffee before it was discontinued, you probably noticed it had a line of something called cascara sugar on top of it. But what is that exactly? Simple: it’s just a mixture of granulated sugar and coffee cherry extract!

What is in cascara cold foam?

Cascara cold foam is another brainchild of Starbucks, and it’s a great way to get a cool caffeine kick on a hot summer day.

Cold foam is just milk frothed while cold. The drizzle of cascara syrup mixed into it before it tops a cup of cold brew coffee gives it a subtle sweetness people have been crazy about since Starbucks introduced it in 2018.

Since getting your hands on a cascara-infused beverage was as simple as hopping in your car and driving down to the local Starbucks, you probably assume that cascara wasn’t banned in North America. And you’d be correct.

On the other hand, it’s a different story in the United Kingdom and other parts of Europe. Cascara can’t be legally sold in the European Union, except in Switzerland. That’s because it’s what’s known as a novel food, which means Europeans didn’t widely consume it before the European Union passed the novel food legislation in 1997.

However, times are changing, and because of the rising popularity of cascara, efforts to get the coffee cherry’s outer skin approved for sales in the EU are underway.

Does cascara have caffeine?

We at Roasty know how much many of you value having a good caffeinated drink in the morning, so it’s not surprising that you’re wondering if coffee cherry tea can get the job done. We’ve got good news: coffee cherry pulp contains considerable amounts of both phenolic compounds and caffeine.

So, cascara not only has the caffeine you were hoping for, but it also doubles as a rich source of antioxidants — beautiful skin and anti-aging properties, here we come!

But the question is, how much is a “considerable amount?” Is it enough to make the drink a suitable alternative to coffee when you need to put some pep in your step? That depends on how much caffeine you need.

The caffeine content in coffee cherry tea is similar to black tea, which means it only has one-fourth of the stimulant that regular coffee does. This might be enough to get you through the day, but if you’re planning on pulling an all-nighter, you’d better stick to a cup of traditional coffee instead of tea made from coffee cherries.

Can you drink cascara cold?

Just like any other tea, cascara tea can be consumed either hot or cold. If you’re brewing it cold, you’ll need to let the coffee cherries steep for 24 hours and about a half cup of cascara coffee cherries for every four and a quarter cups of water.

On the other hand, if you drink hot tea religiously, we recommend checking out this video. It’s got all the information you need for making cascara tea at home. The recipe is simple, and it’s perfect for a cozy night at home or warming you up on a cold winter day.

There you have it — a thorough rundown of cascara, a trend that’s grabbed the attention of many coffee companies and java lovers in recent years.

Whether you use the dried skins to brew a hot (or cold) cup of tea or pick up a bottle of delicious syrup from your favorite bougie coffee shop to add to your home-brewed latte, we’re sure you’ll fall in love with cascara’s fruity, delicious taste.

The Deconstructed Latte: A New Way To Order Coffee