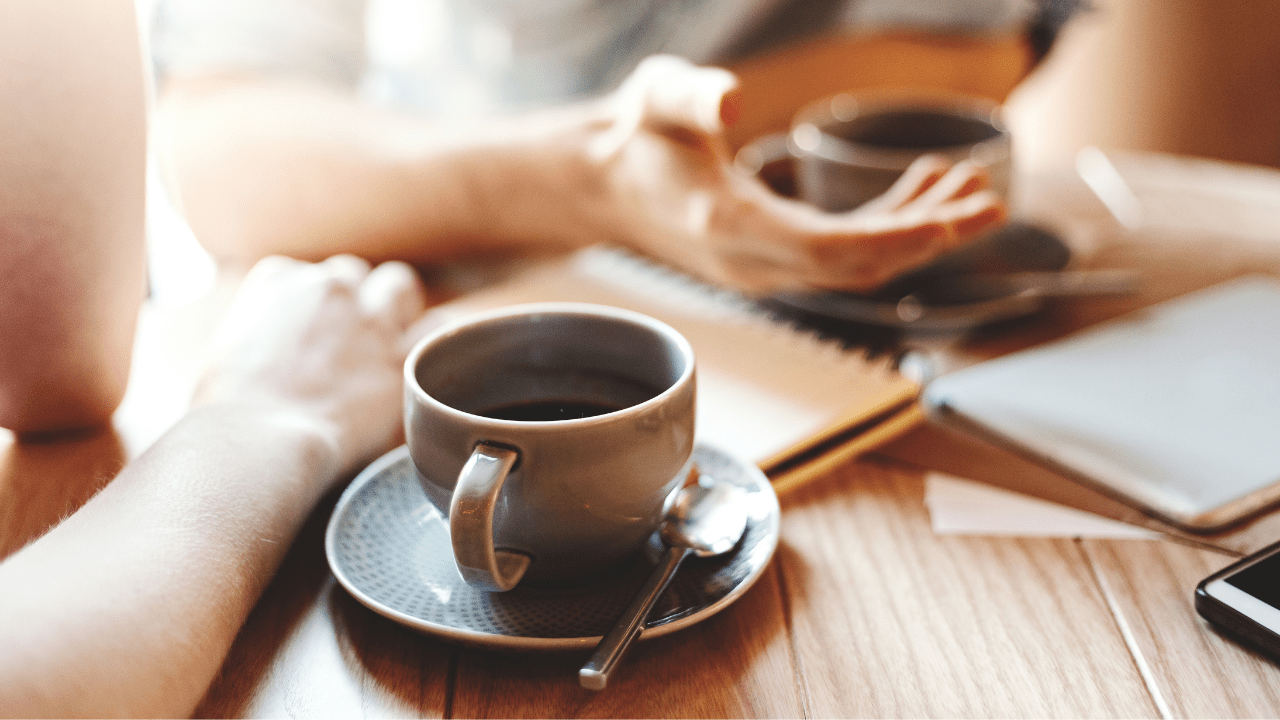 Americans are obsessed with coffee. It’s our faithful ally that helps us start our grind and gets us to the finish line and for many of us, it’s the one thing that can get us out of bed in the morning.

Without it, our daily routines would absolutely fall apart.

And during what’s been a strange year and a half for all of us, rituals like our morning cup of joe have helped to keep things normal.

But really, why do we love coffee so much and what does it help us with?

We surveyed over 1,500 Americans across the US on their relationship with coffee pre- and during the pandemic. We focused on coffee preferences and habits and reflected on shifts we’ve made in how we buy our beans as we look toward the future! 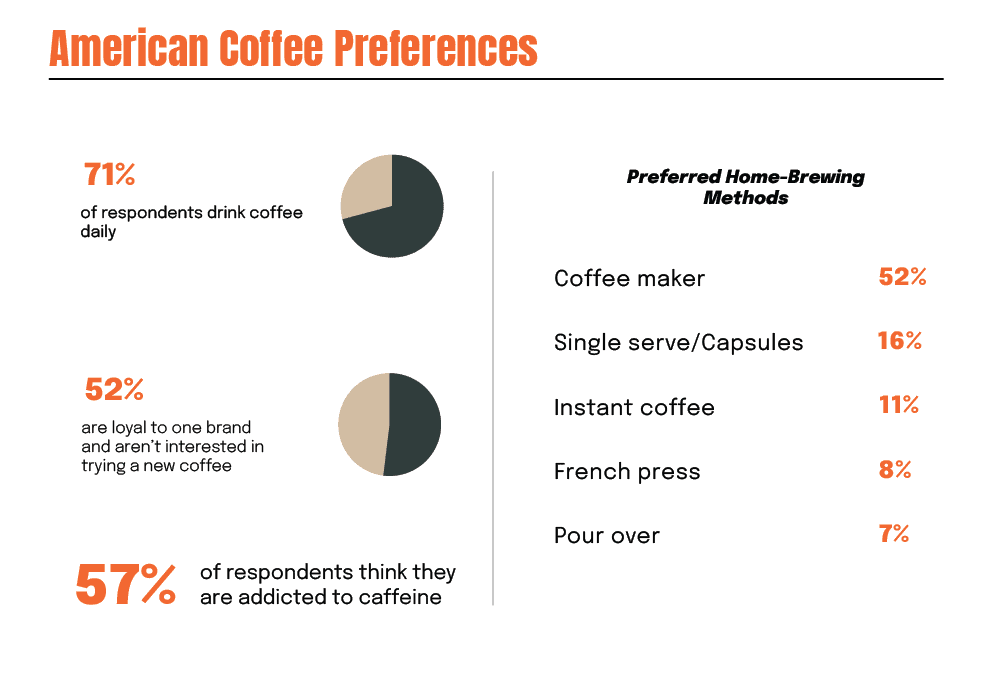 We began by asking respondents about their general coffee preferences and whether they tend to enjoy their coffee daily or less frequently. Unsurprisingly, 71% need at least one cup of coffee a day and overwhelmingly prefer drip coffee makers (52%) to any other at-home brewing method. Single serve cups, like those made for Keurig machines, come in a far second (16%), perhaps due to being a less sustainable option.

American coffee drinkers are also incredibly loyal to their favorite brands, with over half of respondents claiming that they aren’t interested in sampling the goods from competitors.

However, 57% of respondents reported they’re addicted to caffeine and with so many Americans drinking coffee daily, this comes as no surprise! 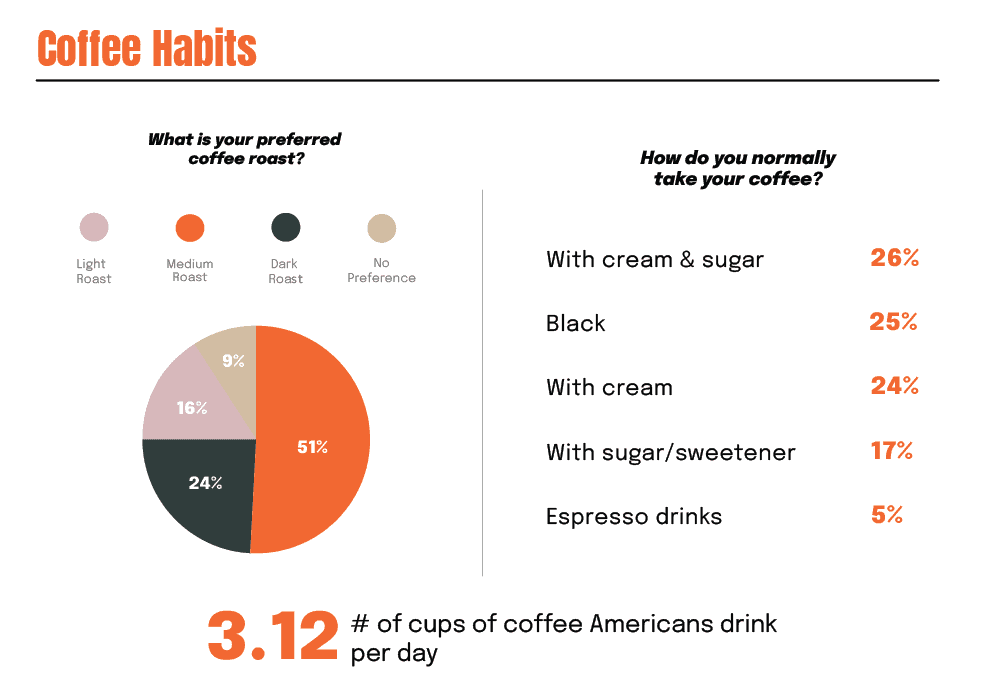 While it’s silly to judge others for how they take their coffee, many still do it! It’s not uncommon to be shamed for adding a little cream to your cup or for drinking one of Starbucks’ seasonal sugar bombs.

This may be why only 5% of respondents say that their usual cup is an espresso drink vs. the 25% that prefer their coffee black or the 26% that sweeten the mix with cream and sugar.

As for when we’re drinking our caffeinated bevs, coffee drinkers prefer mornings for their coffee rituals (91%) although afternoon and evening drinkers make up a decent chunk of the population at 49% and 40%, respectively!

If you’re curious about whether the after-dinner coffee tradition is still holding strong, just ask the 11% of respondents that say they usually agree to a post-meal pick-me-up. 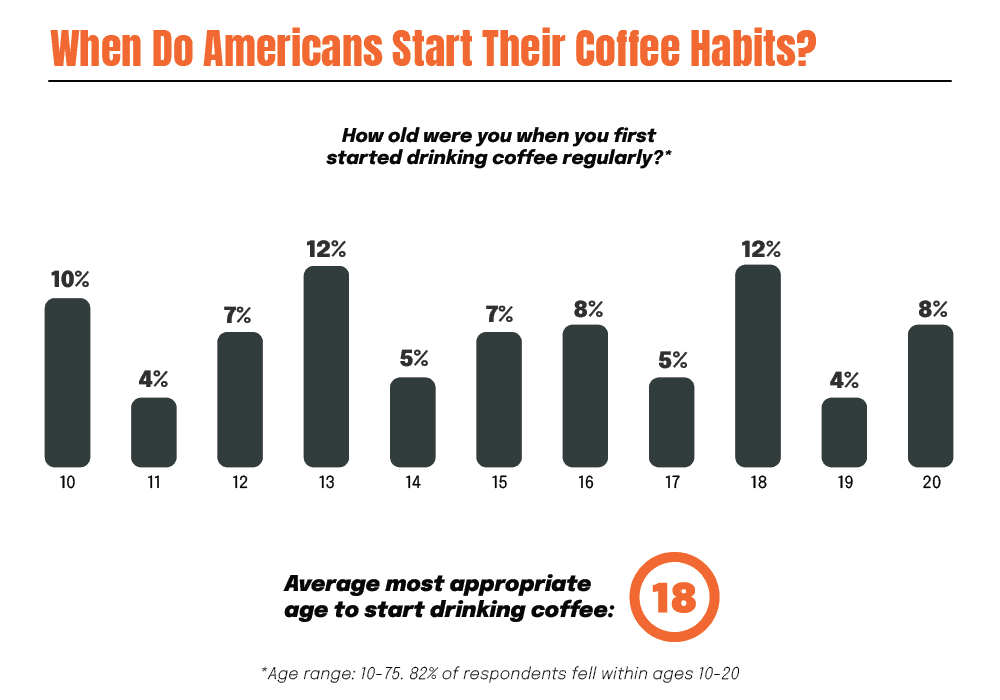 We can all agree that some coffees and coffee drinks can be incredibly sweet and really appeal to children, but when’s the right age to introduce coffee to kids? When asked when they first started drinking coffee regularly, respondents’ answers ranged from age 10 to adulthood! Thirteen and 18 seem to be the most popular ages as 12% of respondents reported starting around then for each age.

On average, respondents decided that 18 was the most appropriate age for people to start a serious coffee habit, implying that most Americans believe that coffee is indeed an “adult beverage.” 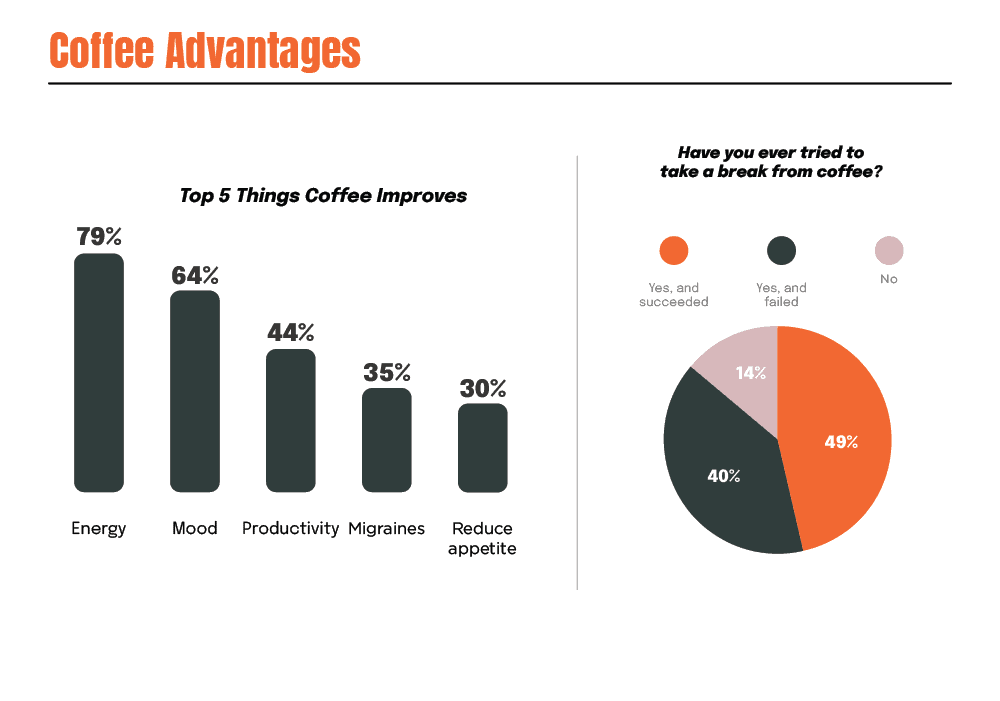 It comes as no surprise that on top of being delicious, we drink coffee because it works – and when asked what coffee helps boost, respondents listed energy (79%), mood (64%), and productivity (44%) as top choices. Physical advantages like soothing migraines (35%) and reducing appetite (30%) rounded out the top 5 list.

Benefits like this may have you questioning why anyone would want to take a break from coffee, but temporary breaks from caffeine, known as “caffeine resets” can help you feel like a superhuman again after your morning cup – especially if it seems like it isn’t getting you as far as it used to.

Forty-nine percent of respondents have successfully taken a break from coffee, however, 40% reported trying and being unsuccessful and 14% did not attempt a break at all.

This may be because coffee has been proven to increase the dopamine levels in your brain while simultaneously stimulating the central nervous system, making us both happier and focused – difficult positives to give up! 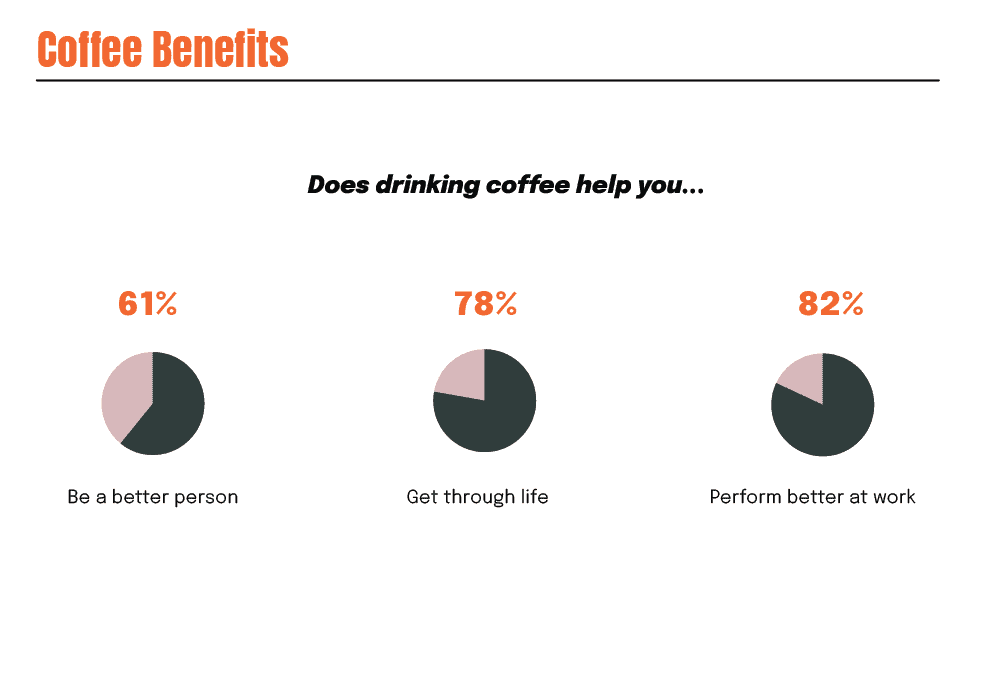 Speaking of benefits, beyond the occasional migraine or midday energy boost, respondents dug deep when asked to look at how coffee helps them cope, saying that coffee helps to improve work performance (82%), be a better person (62%), and just helps them get through life in general (78%).

Respondents can feel justified in turning to coffee for comfort, as scientific studies have shown that caffeine can help relieve depression and improve moods, especially in women.

And with all that’s been going on over the past year, it’s not surprising that many feel that a calming ritual like a daily cup of coffee in the morning or afternoon really helps to get us through the day, but what about those moments where caffeine alone won’t cut it?

Many of us have had to work from home this year and we asked respondents if they’ve ever taken advantage of the fact that you can’t see through a coffee mug, especially not during a Zoom call.

Thirty-seven percent of respondents admit to adding alcohol to their coffee during the workday and 30% have ditched the coffee entirely and used a coffee mug in place of a margarita glass while on the clock. 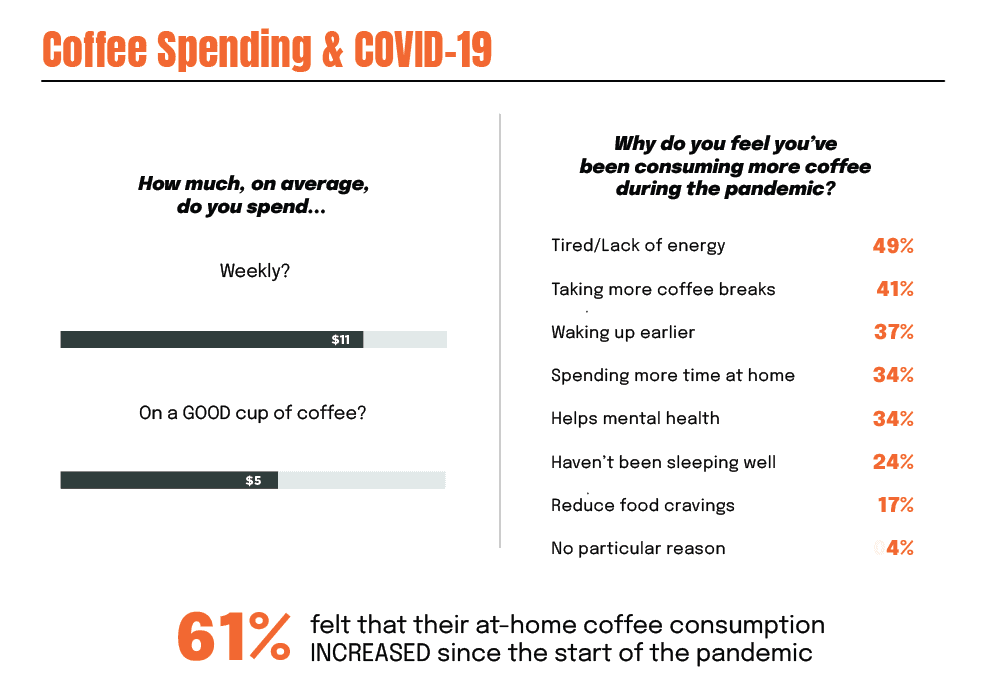 When asked how much they’d spend on a good cup of coffee, respondents’ answers averaged to about $5. Average weekly spend, however, came out to about $11, implying that the occasional $5 cup is just a special treat.

Overall, weekly spend may be looking a little lower due to the COVID-19 pandemic than expected, even though 61% of respondents feel that their coffee consumption has increased — they may just be getting better deals on bulk coffee vs. paying the premium on a takeout cup.

When asked why they think keeping their coffee mugs close helped during the pandemic, respondents reported feeling more tired (49%), having the opportunity to take more coffee breaks while working from home (41%) and understandably, mentioned issues with mental health (24%) and trouble sleeping (24%). 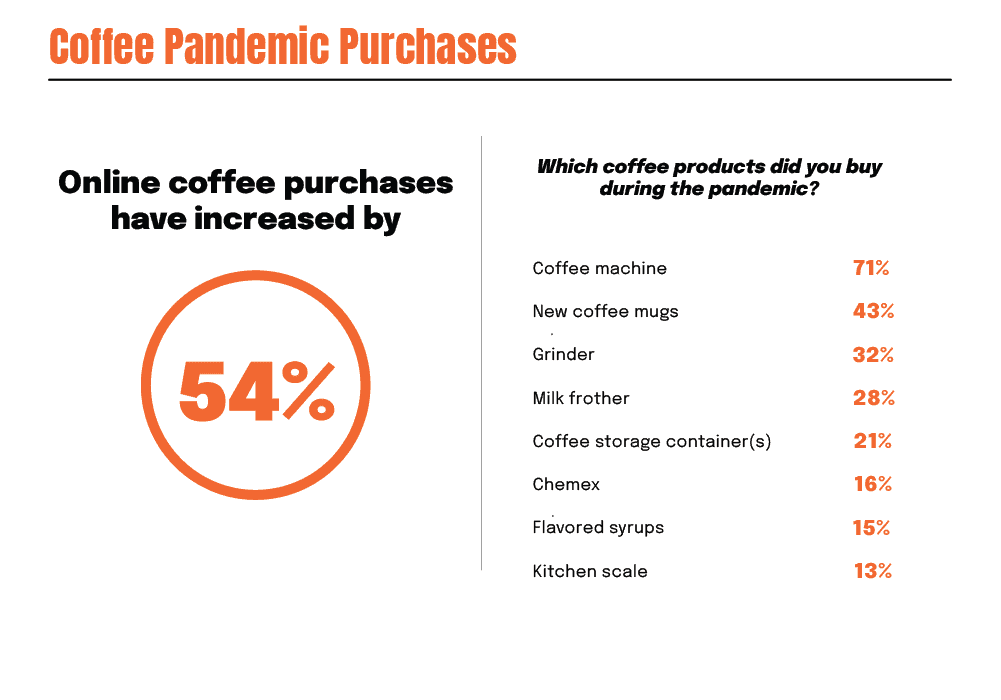 Many cafes and in-person dining spots took a hit early in the pandemic, but that doesn’t mean Americans stopped spending on the stuff!

When asked which new products respondents bought to spruce up their at-home coffee bars during the pandemic, 71% treated themselves to a new coffee machine while others got fancy and tried entirely new brewing methods like the Chemex pour-over set (16%).

Online coffee shopping also saw a 54% increase with many coffee consumers turning to their laptops, phones, and tablets to help keep them fully stocked. 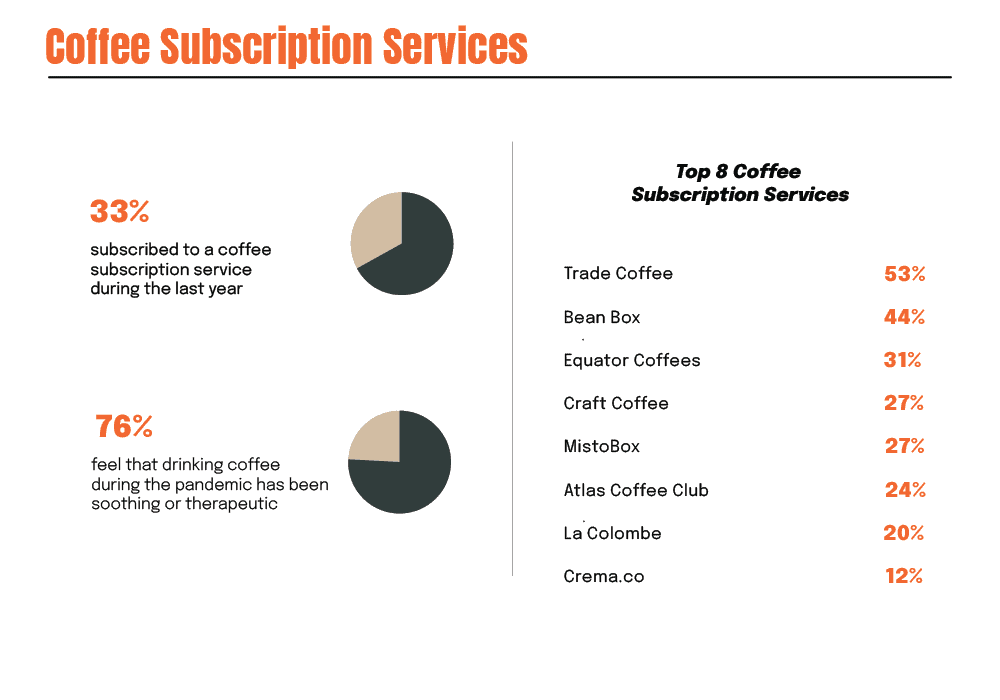 With online coffee shopping on the rise, 33% of our respondents report subscribing to a coffee subscription service during the last year. Why? It may be due to the soothing properties our daily coffee habits provide us!

Over 75% of respondents feel that their coffee habits have been therapeutic during the pandemic and combined with the amazing mental and physical benefits reported like energy boosts and migraine reduction, it’s not hard to see why.

It’s clear that Americans love coffee and that in many ways, coffee loves us right back. So, if you’re just waking up, need to get something done, or just need a boost: have a quiet moment, enjoy a cup of coffee, and get back in the game.

Feel free to use this data and research with proper attribution linking to this study. When you do, please give credit and link to roastycoffee.com.

Pour Over vs. Drip Coffee