The world’s most expensive coffee is made from poop. More specifically, from pre-digested coffee beans found in the feces of Indonesian wild palm civet.

The Asian palm civet is a small mammal that looks like a cross between a cat and a raccoon. This nocturnal animal eats coffee cherries that are then collected, cleaned, and processed to make what is known as “cat poop coffee” in the Western world.

The unique processing method made the civet coffee one of the most sought after coffees in the world.

How expensive is it? What does it taste like? And what’s the truth behind the cat poop coffee’s industry?

We’ll look beneath the surface of this Indonesian novelty.

The Power Of A Good Story

The origin of cat poop coffee goes back to the 18th century when the Dutch introduced coffee harvesting into Indonesia. The locals weren’t allowed to drink coffee themselves since it was all supposed to be exported to Europe.

The Indonesians had to get creative and thus started collecting the poop of the wild civet cat that roamed the jungle at night to look for the best coffee cherries. The civet eats the cherries but its stomach doesn’t digest the beans which can be collected in the poop.

Even though the beans collected from the cat’s feces show higher levels of contaminations, the processed coffee is safe to drink with no contamination left present from neither e.coli or other bacteria.

The civet is a picky eater and only selects the finest and the ripest cherries. This results in a superior quality of the beans. At the same time, the digestive process changes the structure of proteins found in coffee. This removes the acidity which makes the coffee smoother by stripping it off the bitterness. Therefore, the taste is most often described as smooth and earthy.

Some experts argue, however, that the lack of acidity contributes to the lack of flavor. The acidity is a key element that makes specialty coffee. This is what makes it “bright” and lets the fruity and floral tasting notes be manifested.

While the coffee processing through civet’s stomach is interesting, the coffee industry has expanded massively since the 18th century and the Third Wave coffee places much greater importance on sourcing the best beans and perfecting the processing method than a cat ever could. This opens up a question of whether the cat poop coffee’s superiority is still relevant today. 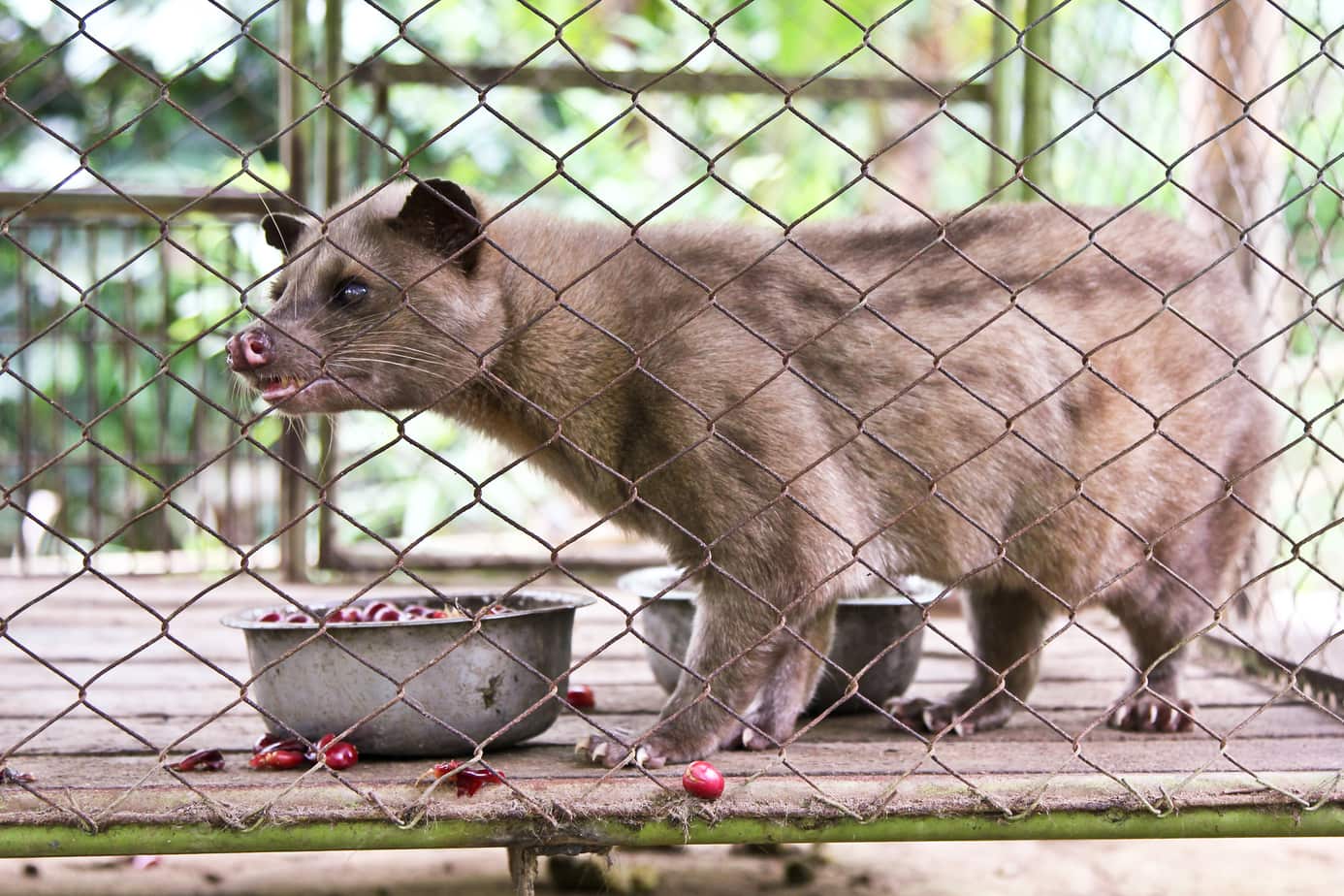 Indeed, coffee processing stories don’t get more original than this one which is what created the unique demand for it. Wild cat poop coffee is not easy to source and the amount that is allowed to bring in is limited. The novelty of the story and the difficulty in sourcing results in a big price tag.

Kopi Luwak, as it is called in Indonesia, was first brought to Europe by Tony West in the 1990s, a director of Taylors of Harrogate, and its popularity exploded since. A cup of this pre-digested coffee can cost you up to 80 USD and a pound of the beans sourced by the civets ranges from 100 to 600 USD per pound.

Kopi Luwak has gained mass popularity in Bali and is nowadays seen as a “must-do” activity for all the tourists. The locals have quickly responded to the demand and generate significant revenue selling cat poop coffee as well as offer plantation tours promising an unforgettable experience. But given the fact that 80% of Kopi Luwak sold nowadays is fake, it makes for an expensive cup of hot tourist placebo.

Traditionally, cat civets roam the jungle of Sumatra at night to look for the ripe coffee cherries. But the craze around the cat poop coffee story in the Western world and its appeal for the tourists have monetized the whole civet coffee industry.

The reality is that almost all of the Kopi Luwak these days is caged rather than wild, and sadly, civets live in terrible conditions. They are caged in small spaces covered in urine and poo, with not enough water, no free movement or interaction with other civets. These nocturnal animals are often exposed to daytime noise and traffic.

The Oxford University Wildlife Conservation examined 16 coffee plantations in Bali that produced civet coffee and they all failed the test as well as the animal welfare requirements, which means almost all of the Kopi Luwak is produced in these terrible conditions. Now, that makes the poop coffee hard to swallow.

Like Free Coffee? Click here to get your first bag of Atlas Coffee for $0 (just pay shipping)

A civet in the wild eats small insects, reptiles, fruits, and mangoes, in addition to the coffee cherries. When caged and farmed for coffee, they are malnourished and forced to live solely with coffee cherries on the menu.

Also, farmers often feed the civets old and low-quality coffee beans, as well as Robusta instead of Arabica. This, of course, defeats the whole purpose of Kopi Luwak since the main reason it is so special is that, in the wild, the civet looks for the finest and ripest coffee cherries.

The demand for cat poop coffee has created a commercial opportunity for scammers. What’s easier and less expensive than farming civets? Skipping that step altogether and selling regular coffee as the famous cat poop one. As mentioned before, 80% of Kopi Luwak sold is fake. 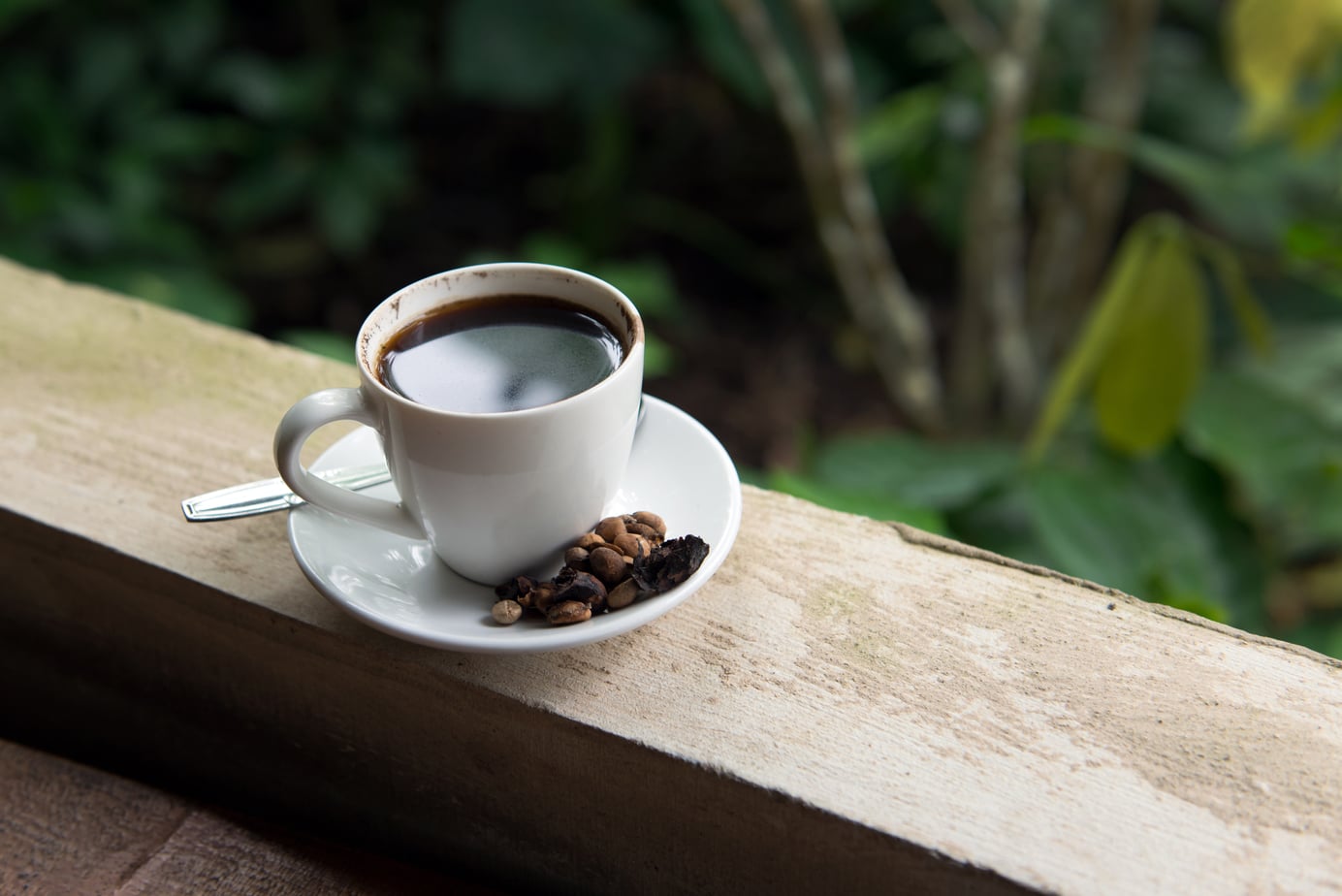 Cut The Crap: The Quest For Sustainability

The news of the terrible practices around the cat poop coffee shocked the Western world more than its unique production. Soon after being brought to Europe, under pressure from World Animal Protection (WAP), change.org, and a successful Facebook campaign “Kopi Luwak: Cut The Crap!”, the big stores stopped stocking Kopi Luwak refusing to support the cruel practices.

The Western world refused to allow the horrid farming conditions and Sustainable Agriculture Network (SAN) has banned caged civets altogether. In further efforts to find and support the farms producing sustainable civet coffee, there has been an independent certification initiative supported by the Specialty Coffee Association.

It is questionable how much of a difference these efforts make and the caged civet coffee plantations remain prevalent in Indonesia. While some coffee gets certified as authentic sustainably sourced Kopi Luwak, it is hard to establish whether it is truly 100% wild.

An interesting method of processing is not the only thing that hides behind this Indonesian treasure made by wild civets. There is a lot of controversy surrounding the most expensive coffee in the world.

Monetizing this unique coffee ruined the whole point of what made it superior. Since the civets are being fed low-quality beans instead of looking for the best cherries in the wild, the resulting cup of coffee isn’t something to call home about.

Some experts claim that the most expensive coffee wasn’t anything special even to begin with. It is true that the digestion removes the acidity and contributes to a smoother cup, it also limits the flavor profile.

Sure, the novelty of your coffee being eaten by an Indonesian wild civet and then harvested from its poop sounds inviting and unique, the truth is, today’s standards for high-quality coffee bean in specialty coffee is even higher than the one of the civet.

Is It Worth A Shot?

Given all the facts and the surrounding controversies, the cat poop coffee seems more like a tourist trap rather than a specialty coffee that would be on the list of the best coffees to try.

It might be the most expensive coffee in the world, but not because of its taste. The main selling points of Kopi Luwak is not the flavor profile but the unique processing method. And it is a prime example of the power of a good story and how the Indonesians managed to turn poop into gold. We’ll give them that.

Would you pay over 50 dollars for one cup of coffee made from cat droppings?

It might be worth a shot out of pure curiosity but it’s the animal welfare concerns and the hefty price tag that would make it hard to stomach, not the poop.

Like Free Coffee? Click here to get your first bag of Atlas Coffee for $0 (just pay shipping)
Learn more