Madagascar Coffee: An Essential Part Of Life And Culture

Madagascar is an island country located in the Indian Ocean, as well as being the fourth-largest island country in the world. Breaking from the Indian Subcontinent over 88 million years ago, the plants and animals there have been allowed to evolve in relative isolation: over 90% of its wildlife can’t be found anywhere else on earth.

Now one of the other things that are guaranteed to be found there (you can see where we’re going with this…) is coffee. For the people of Madagascar, coffee is a way of life, a true national obsession. The Malagasy are dedicated to the production and consumption of the world’s favorite caffeinated beverage.

How did coffee make it to Madagascar? Does it play an important role in society? And what are some unique features of their coffee culture?

A Short History Of Madagascar Coffee

Coffee was first introduced to Madagascar’s neighbor island: Réunion, previously known as Bourbon Island. This coffee was from Ethiopia and had some success before a rapid decline. Like any industrious farmers would do, these Réunion Creoles took the plants to Madagascar and continued coffee production there.

However, French colonists arrived in Madagascar in 1895 and quickly assumed control of the production of coffee. Colonial policies made coffee the island’s major export in the 1930s. One upside was that they unintentionally promoted smallholder production from the indigenous Malagasy.

But an uprising in 1947 between the French, Réunion Creoles, and the native Malagasy nationalists over resources led to one of the most bloody episodes in French colonial history. The conflict between these two opposing sides has left deep scars in Malagasy society.

Independence for Madagascar came in 1960 and until the 1980s it was one of the island’s biggest exporters of coffee. During this period, Madagascar was the eighth-largest coffee producer by volume in the world.

Alongside coffee, cloves, vanilla, and rice are also exported – most of this farming is for subsistence. Farmers primarily cultivate what they can to feed their families and sell the surplus at local markets. 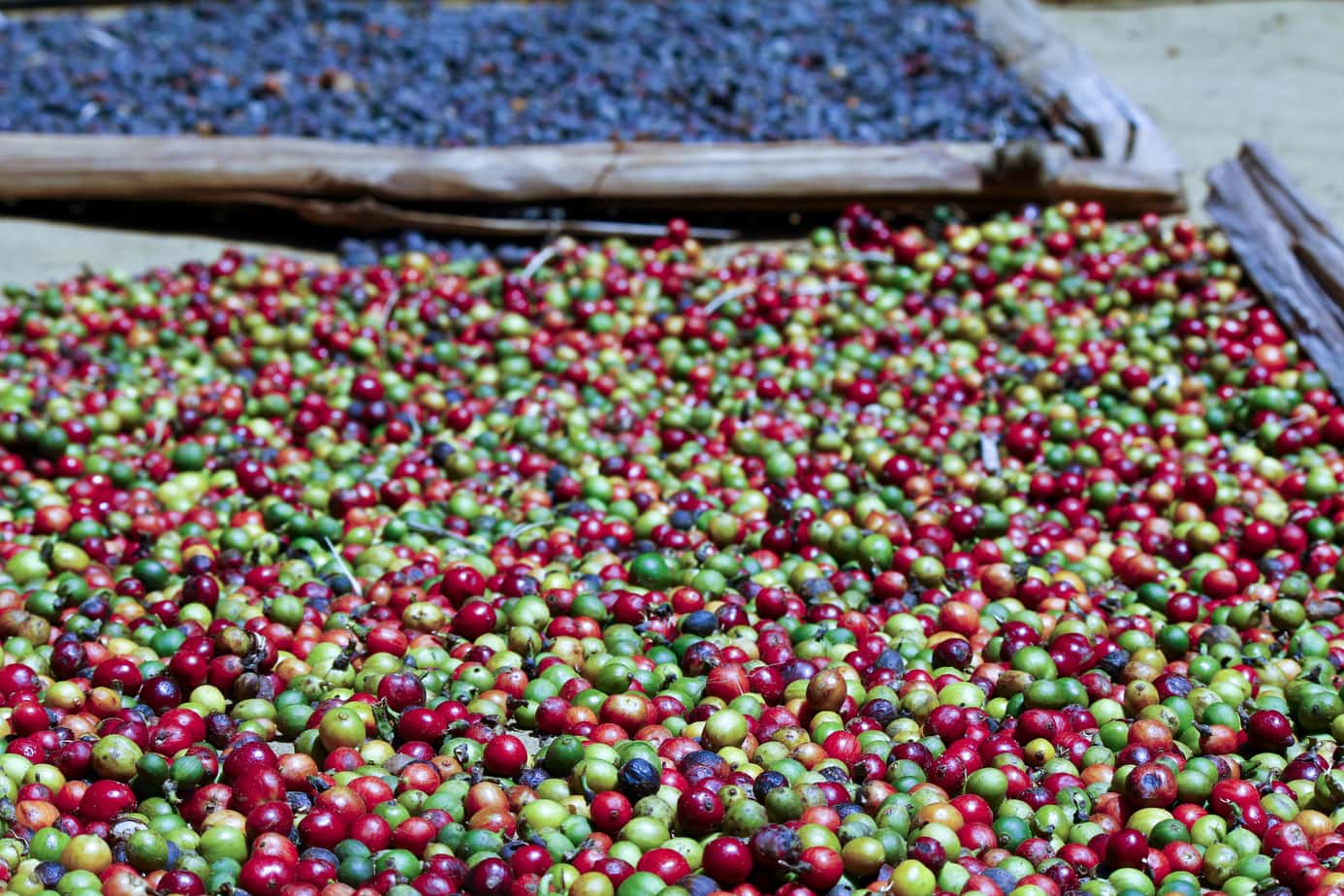 The coffee grown in Madagascar has changed over time. While it was primarily low-grade robusta that used to be cultivated in the country, now the amount of higher-grade arabica beans has increased. Around 90% of the coffee produced in Madagascar is still robusta, but now arabica takes up the remaining 10%.

The robusta coffee beans exported from Madagascar are now considered to be of high quality. Most of the robusta is exported to France.

The robusta is grown in tropical areas of the country at altitudes of 100-300m by the east coast in the Vatovavy-Fitovivany region, Antalaha, Tamatave also on Nosy Be in the northwest near Ambanja and by the Sambirano River.

Arabica is grown at higher altitudes in the central highlands, in Antananarivo province, and near Lake Alaotra.

Small, family-run farms dominate the scene in Madagascar. These farmers put in the time and effort necessary to ensure a good product. The coffee cherries are picked by hand before being washed and sun-dried.

Most crops here including coffee are produced organically as they have been for hundreds of years, but are without certification. By mixing crops and relying on natural, wild fertilizer these farmers ensure that the coffee is grown in the healthiest way possible. This encourages biodiversity and the continued use of wild pest controls, so as to minimize the tainting of the natural surroundings.

Madagascar’s success in exporting other high-quality crops such as vanilla has created optimism that their arabica beans will make an impression on the international specialty coffee market. In 2017, Madagascar exported 1,600 tons of prepared vanilla, valuing at over $680 million – here’s to coffee reaching these big numbers one day!

The United States Agency for International Development (USAID) has worked hard to provide help for the farmers of robusta and arabica beans in Madagascar and promote their successes.

New training and processing centers have been set up to show new techniques centered around the cultivation of coffee, the roasting of beans, and alternative and sustainable methods of farming.

If you ever find yourself in the country, one thing’s for sure: you won’t need to search for long to suss out some great green coffee beans. These are sold all around Madagascar in markets where traditionally it is scooped out of big sacks with 390g condensed milk cans.

Yes… we agree that that may seem like a strange way to calculate an amount of coffee, but hear us out. Condensed milk is very popular in Madagascar, which means these trusty cans are found everywhere. The entire system for purchasing coffee at these local markets is based on scoops.

Green coffee isn’t the only kind of coffee sold at these markets: brewed coffee is everywhere and is an essential source of income for many people in Madagascar. This is particularly true for women: in sub-Saharan Africa, 51% of all female workers outside of agriculture operate vendors. 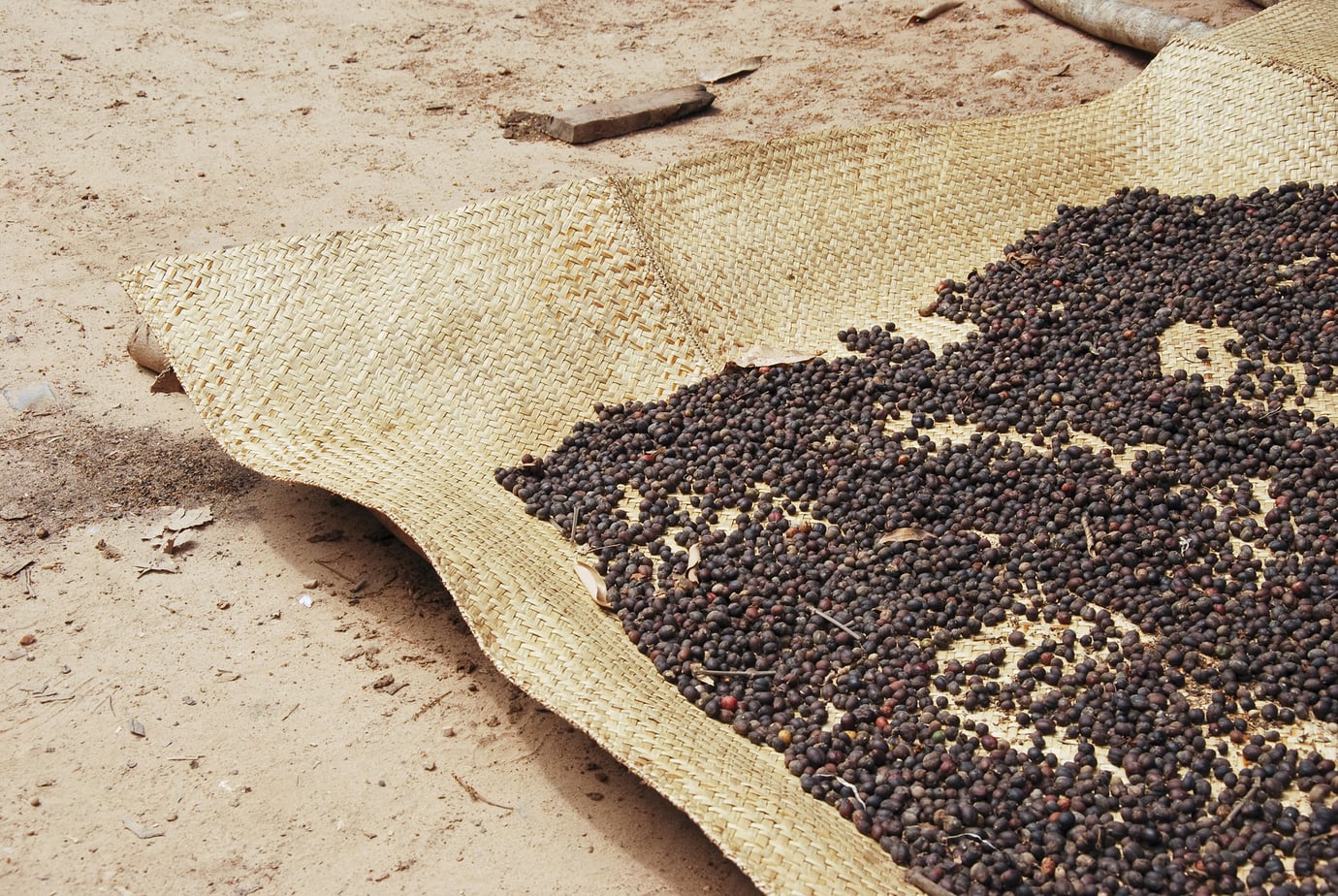 Since they are such coffee-loving people in Madagascar, these vendors serve an essential purpose, particularly for those who may not be able to afford to drink at dedicated cafés. These improvised stalls can be found everywhere and are always ready for when it’s time to re-caffeinate.

But it’s not only coffee that these vendors provide. Since a large number of people in Madagascar lack food as well as fuel to cook with, many rely on these vendors for food too. The traditional rice cakes served alongside the coffee provides much-needed sustenance for these people.

Working as a vendor is a demanding job with little return – rarely can vendors earn enough to provide a stable education for their children, afford quality housing or healthcare. Nevertheless, they are essential to the local communities of Madagascar, supplying the ever-important taste of a hot cup of coffee.

The farmers of Madagascar are using traditional methods to produce excellent-tasting coffee that they know will be appreciated for its taste both on and beyond its shores.

Coffee is more than just a pick-me-up here, its a way of life. Not only do people in Madagascar rely on it to kickstart their days, but many of their lives also depend on it. It’s an essential crop that has long been a part of Madagascar’s history and identity and that sure isn’t changing any time soon.

How To Tell If Coffee Creamer Is Bad

Pour Over vs. Drip Coffee