As an avid coffee drinker seeking the ideal blend for your home cafe, you probably have a go-to blend for daily drinking and a softer blend for the occasional afternoon pick-up. What about those days when old faithful can’t cut it and you need something, well, stronger?

Enter Death Wish Coffee Co.®, the World’s Strongest Coffee, and its alternate blend, Valhalla Java. This is not your average coffee. Both deliver strong flavor and high caffeine content, but which is better? Read on to learn everything you need to know to decide which blend triumphs in the battle of Death Wish Coffee vs. Valhalla Java. 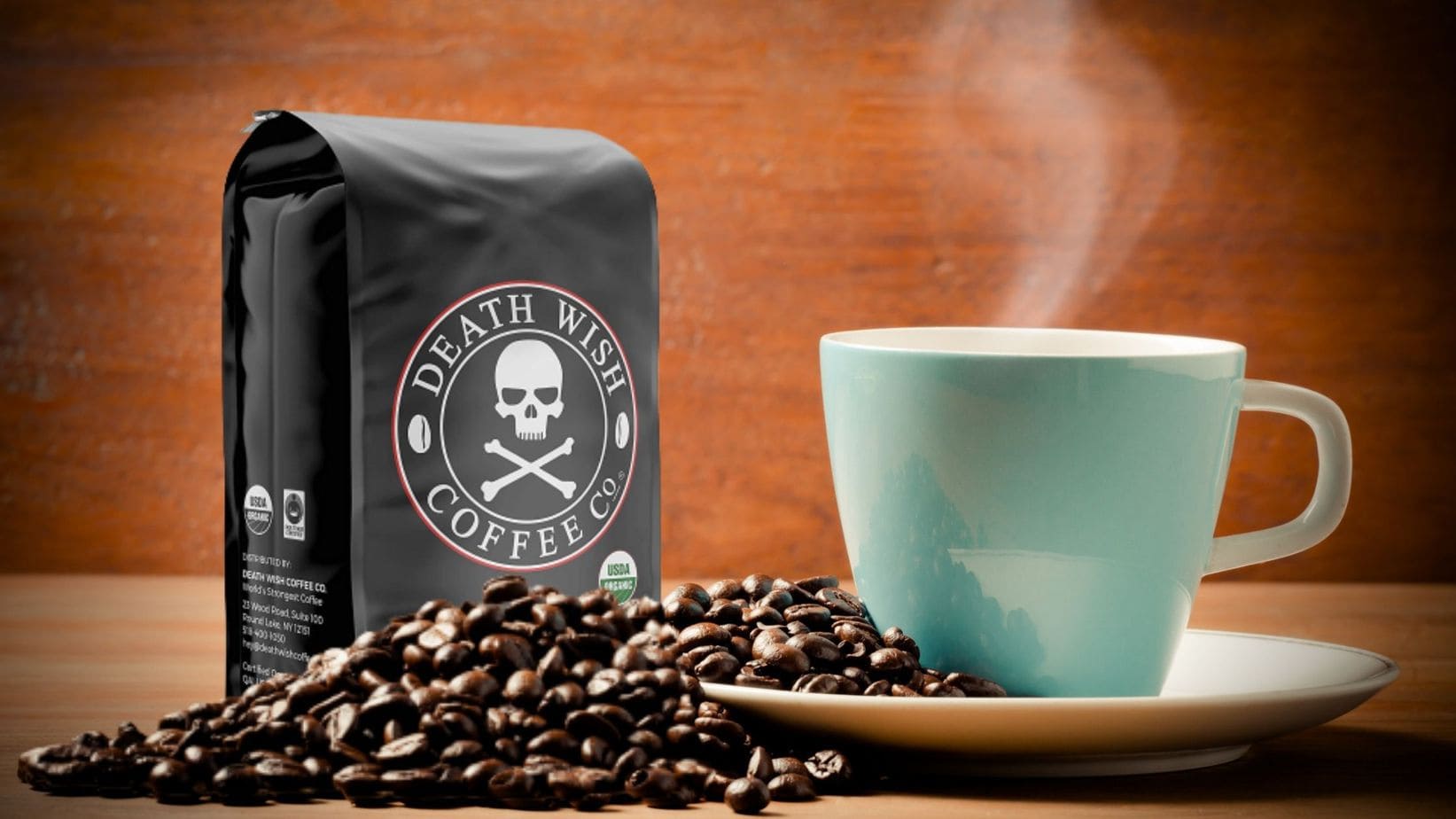 Though the Death Wish skull and crossbones may be one of the most identifiable logos in the coffee world, Death Wish Coffee Co. isn’t flashy. What began as a small artisan coffee shop has evolved into a trusted brand in direct competition with leading coffee companies and fueling thousands of people per day.

Mike Brown, founder, and CEO wanted a coffee variety that would wake people up without compromising on flavor. So he developed a unique roasting process and only used high-quality, organic, fair-trade beans. On top of crafting an incredibly popular and tasty product, Brown managed to build a loyal and positive working environment for his team.

You can find Death Wish coffee and merchandise on the company website, in thousands of stores across the United States, and online at major retailers. Additionally, Death Wish Coffee Co. offers a weekly newsfeed, maintains a blog, has two podcasts, and runs contests regularly. You can even join a loyalty rewards program to earn discount codes and gift cards.

Bonus Content: What Else Can You Make With Death Wish Coffee Blends?

While the original coffee is divine on its own, you might be surprised by how versatile it is. There are hundreds of delectable desserts and specialty drinks, and Death Wish Coffee Co. tapped into that trend with a page dedicated to recipes for their coffee blends! They even have a coffee cocktail recipe. Try the Death Wish Coffee Espresso Martini or learn how to make a microwave brownie with coffee flour.

Also known as the company’s signature blend, the organic, fair-trade bold coffee blend packs a serious caffeine punch, and it tastes amazing. You might expect the world’s strongest coffee to taste exceptionally bitter, but it doesn’t. It will wake you up, though!

Despite being exceptionally strong, Death Wish shouldn’t give you the jitters after just one cup. However, if you are notably sensitive to caffeine, you will probably notice a slight shock to your system.

Throw out everything you think you know about brewing coffee for one moment. That’s right, forget about the one-to-one ratio for scoops and coffee. Instead, death Wish recommends using a whopping 2 ½ tablespoons for every 6 ounces of water. Of course, it makes sense that you would use more coffee ground to get the extra kick, but it may not be necessary for everyone.

You can brew Death Wish in a traditional drip maker or pour-over. However, we recommend a French press if you want to taste the full flavor.

What do you think of when you hear “world’s strongest coffee?” We worried that it would taste bitter, but this is one tasty blend. With notes of chocolate and cherry, it was smooth enough that we drank it black with no regrets!

It is marketed as the world’s strongest coffee, and that suggests a serious caffeine kick. Death Wish Coffee Co. delivers a whopping 472 milligrams of caffeine in one cup of coffee. To give you a comparison, that’s more caffeine than you get with three double-shots of espresso or five times the amount found in regular coffee.

The signature blend is the easiest product to find, and it comes in various sizes and forms. You can select whole bean or ground coffee in 1-pound or 5-pound packaging. Additionally, the signature blend comes in single-serve cups and instant coffee sticks. 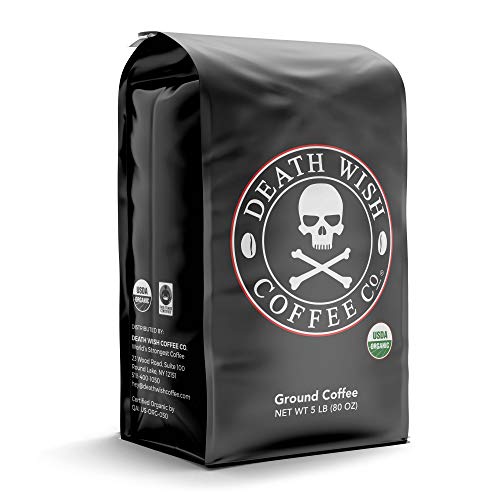 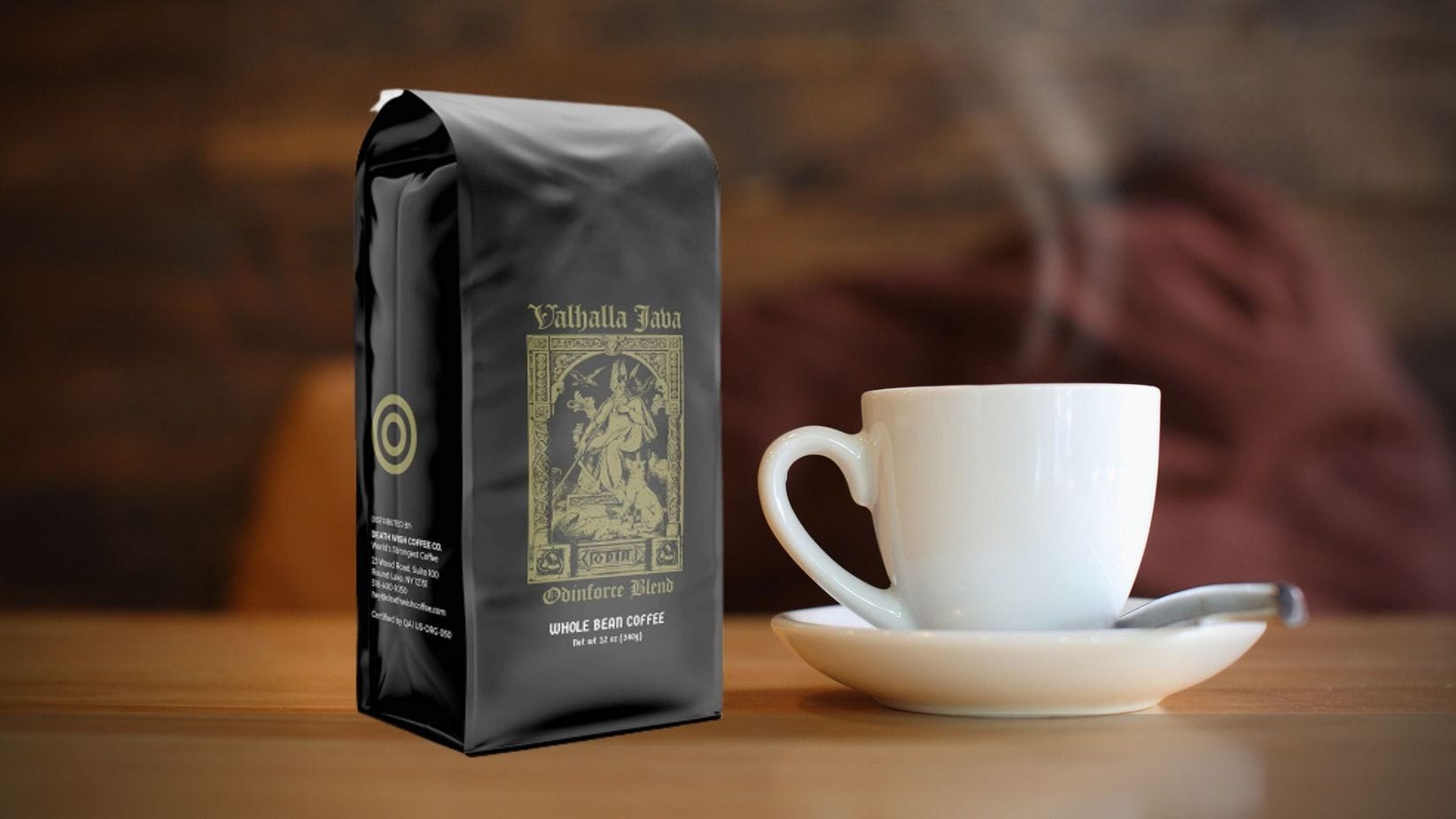 Custom-crafted for guitarist Zakk Wylde, the Valhalla Java Odinforce blend is forceful. Made from beans grown in the nutrient-rich soils of Indonesia’s volcanic islands as well as Central and South American beans, you can expect the same high-quality coffee that the original Death Wish delivers, with a slightly different flavor profile and content.

It’s natural to think that brewing notes would run parallel to those suggested for the signature blend, but that’s not the case. We have to say that the French press method didn’t turn out as well as the pour-over. While it seems impossible to craft a bad cup of Valhalla Java, the pour-over cup was the superior experience.

It’s worth noting that Valhalla Java performed better in a drip coffee pot than Death Wish Coffee Co.’s dark roast. It seems that the unique Odinforce blend works well no matter how you choose to brew it.

Valhalla Java is still one of the strongest coffees you can drink, but it doesn’t seem to have quite as much as the signature blend, so it could be a good night-time coffee. This could be good or bad, depending on how much caffeine you crave in a day.

You have fewer choices for purchasing Valhalla Java, though you can buy it ground or as a whole bean. Choose the 12-ounce bag or a 5-pound bag, or pick up single-serve pods. 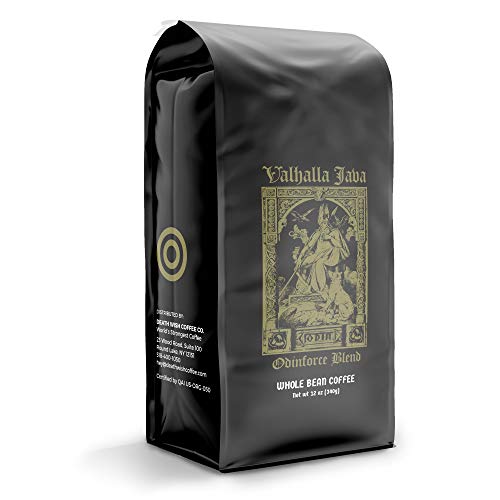 Death Wish Coffee vs. Valhalla Java vs. The Rest

Death Wish Coffee Co.’s Dark Roast and Valhalla Java Odinforce blend are two sides of the same coin. They offer similar experiences and flavors, but how do they measure up against other strong coffee blends? 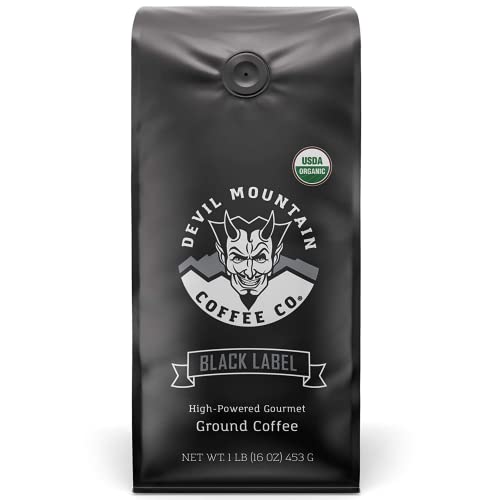 Devil Mountain Coffee Co. claims that its Black Label blend trumps everything Death Wish Coffee Co. has to offer. If the claims are true, Black Label contains slightly more caffeine than Death Wish. However, there seems to be some disagreement between casual coffee drinkers about how well it works.

We tried the Black Label blend and found this dark coffee smooth with fairly low acidity but didn’t notice an overwhelming difference in caffeine content. It may come down to a personal taste of flavor between Devil Mountain and Death Wish.

Biohazard Whole Bean Coffee, The World's Strongest Coffee 928 mg Caffeine (16 oz)
Check Price on Amazon If you click this link and make a purchase, we earn a commission at no additional cost to you. Last Update: 2023-01-31

Claiming to deliver more than 900 milligrams of caffeine, Biohazard Coffee makes a case for Earth’s strongest coffee. Unfortunately, while it may boast some serious caffeine, it falls short in a taste comparison. So if you don’t appreciate slight tobacco notes in your coffee, you may want to steer clear of this one.

Two stellar coffees from one awesome company make our job difficult. It’s not easy to pick between these two, but if push comes to shove, Valhalla Java is our pick. Perhaps it’s the power of Odin, or maybe it’s just the slight drop in caffeine, but one of the key differences is that this masterful artisan roast works well with any brewing method.

Of course, we wouldn’t pass up a chance to drink Death Wish Coffee either, so it’s a toss-up. If you can handle the caffeine content and crave something bold, you can’t go wrong with either blend.

What is Blonde Roast? Lighter Than Light Roast

How To Sharpen Coffee Grinder Blades