If you’re a  Keurig brewer, there’s nothing like pushing a button and enjoying a strong cup of Keurig coffee within seconds. Efficient, delicious, and easy to operate, there’s nothing more simple than brewing with Keurig machines.

However, we all need that extra kick to get us through the most hectic of workdays. And sometimes, the regular K-Cup brew just won’t cut it.

Before you begin the hectic 9-5 work schedule, you need these powerful, potent, and deliciously addictive K-Cups to fuel you every step of the way. Filled with an extra dosage of caffeine, these extra bold, Up your Keurig coffee game with extra bold, extra caffeinated K-cups!

At a Glance: Strongest Keurig K-Cups

A Quick Description of Caffeine

If you’re reading this, you’re probably just as addicted to caffeine as we are. However, it’s important to understand the power of this potent molecule that so many crave coffee lovers in the early morning. According to the Food and Drug Administration, a healthy daily amount of caffeine is around 300-400mg, with 600mg being the limit to maintain a healthy lifestyle.

Little known to some, but caffeine is actually labeled as the world’s most popularly used psychoactive drug. But why is it so addictive? Without getting into the nitty-gritty medical details, caffeine affects the body by stimulating the central nervous system, as well as increasing heart rate and blood flow. As a result, those who consume caffeine often feel more awake, alert, and energized.

Some Consequences of Consuming Caffeine

However, there are some downsides to consuming too much caffeine. For instance, if you don’t regularly consume strong coffee or caffeine in general, you may notice these effects faster and more intensely than your caffeine-addicted loved ones. The extra caffeine can cause more side effects than regular coffee, both minor and severe depending on your health history.

If you don’t consume a lot of caffeine, you may experience the “jitters” after drinking a cup of coffee, causing some minor restlessness, twitching, and more. If you have anxiety or sleeping disorders, too much caffeine can make these symptoms worse, and can also severely increase heart rate and blood flow, which may not be the best for those who have heart or circulatory health issues.

We all need an extra “oomph” every now and then, and these succulent K-Cups will power you throughout each day. Not only do they have a significant kick of caffeine in them, but a mouth-watering flavor to match! There are many K-Cup options on the internet, but we’ve collected those with the most caffeine, most flavorful, and the most affordable options for you. 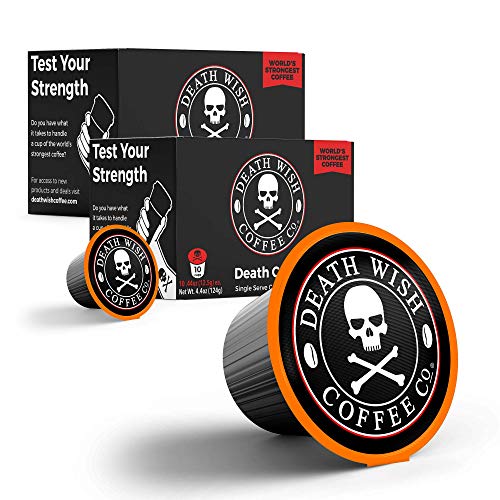 One of the most popular caffeine-packed coffees on our list, Death Wish Coffee definitely lives up to its name. Self-titled as the world’s strongest coffee, Death Wish Coffee has a flavor that fulfills the hype of its high caffeine content. In fact, you can expect Death Wish’s Coffee to contain about 59 milligrams of caffeine per fluid ounce. Death Wish Coffee’s K-Cups aren’t don’t only make incredibly strong coffee, but they are also Fair Trade Certified and completely organic, too!

These Death Wish Coffee’s K-Cups are a dark roast and have a chocolate flavor with a hint of fruity, sweet cherry. The roasters at Death Wish make sure to roast their beans as dark as possible to highlight the inner flavors without burning them. A combination of low acidity and high caffeine, Death Wish Coffee is easy to enjoy for those who need something sweet and easy on the stomach. Ultimately, Death Wish deserves a place at the top of our list because the bold flavor and extra caffeine crown it as the strongest Keurig K-Cup. 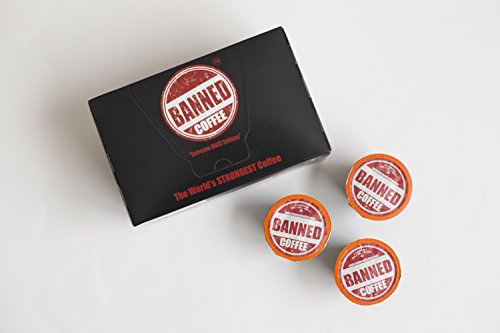 World's Strongest Coffee Single Serve Capsules for Keurig K-Cup Brewers, 12 Count - Our Best Medium Dark Roast super strong k cups for Keurig 1.0 and 2.0
$14.99
Buy Now on Amazon If you click this link and make a purchase, we earn a commission at no additional cost to you. Last Update: 2021-04-18

Banned Coffee has been in the business of making deliciously potent coffee for over 25 years. Roasting their K-Cups to be the perfect in-between of medium-dark roast, Banned Coffee specializes in making gourmet single-serve coffee that lacks bitterness, and has smaller acidity than other roasts similar to it. You can expect bold notes of berries and chocolate in Banned’s K-Cup roast, giving you a pleasant combination of sweet fruits and delectable cocoa.

Claiming that their K-Cups have more caffeine than some energy drinks, Banned also boasts that their coffee contains more minerals, vitamins, and antioxidants. In actuality, Banned Coffee contains about 39.5 milligrams of caffeine per fluid ounce making it a strong option, yet not overwhelming. 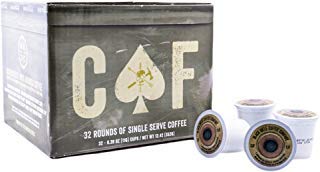 Black Rifle Coffee Rounds (CAF (Medium, 2x Caffeine), 32 Count)
Buy Now on Amazon If you click this link and make a purchase, we earn a commission at no additional cost to you. Last Update: 2021-04-18

The first medium roast to make our list, Black Rifle Coffee Company offers K-Cups that have really strong caffeine for each single-serve brew. Though Black Rifle doesn’t explicitly list the exact amount of caffeine that you can expect from each K-Cup, the company does boast about having double the amount of caffeine found in regular K-Cups. This CAF (caffeinated as f***) extra bold blend consists of beans that are carefully cultivated from Brazil and Columbia, roasted to a well-balanced, strong medium roast.

Black Rifle’s K-Cups aren’t only delicious, but they go towards a good cause, too! Owned and operated by United States Veterans, Black Rifle’s mission behind its delicious coffee is supporting men and women in service. So if you’re looking for a strong coffee to brew that has a strong purpose behind it, Black Rifle’s got your back.

Wake The Hell Up K-Cups 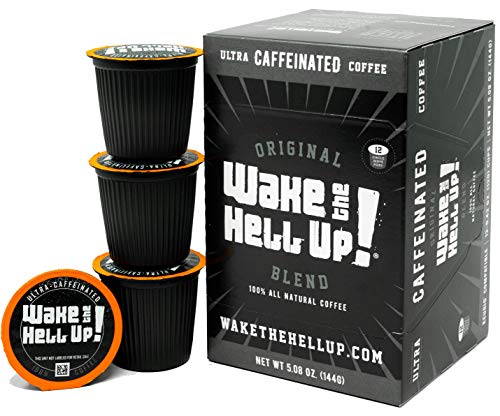 Wake The Hell Up! Dark Roast Single Serve Capsules | Ultra-Caffeinated Coffee For K-Cup Compatible Brewers | 12 Count, 2.0 Compatible Pods | Perfect Balance of Higher Caffeine & Great Flavor.
$12.69
Buy Now on Amazon If you click this link and make a purchase, we earn a commission at no additional cost to you. Last Update: 2021-04-18

Roasted in small batches at the company’s facility in Utica, New York, Wake The Hell Up K-Cups contain a concentrated amount of caffeine to give you that extra burst of energy. Wake The Hell Up Coffee is described as being “ultra-caffeinated,” meaning that it possesses all the power of an extra bold cup of coffee–but without some of the annoying side effects.

Another perfectly roasted dark roast, these K-cups contain 12 grams of ground coffee made from specialty grade coffee beans sourced in Central and South America. In fact, this blend is a full city roast, which is the level of roasting that occurs right after the second crack. In each 8 ounce cup of coffee, you can expect an extra-strong, high dose of caffeine. Though the exact amount isn’t labeled, the blend of both arabica and robusta beans alone are powerful enough to kick-start your morning. 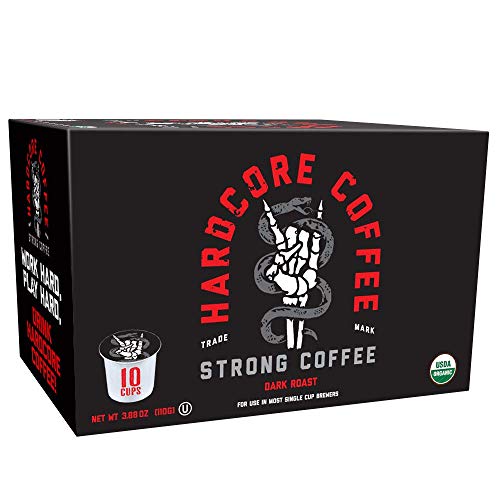 Hardcore Coffee Single Serve Pods for Keurig K Cup Brewers High Caffeine, Strong Organic, Dark Roast, 10 Count
$12.99
Buy Now on Amazon If you click this link and make a purchase, we earn a commission at no additional cost to you. Last Update: 2021-04-18 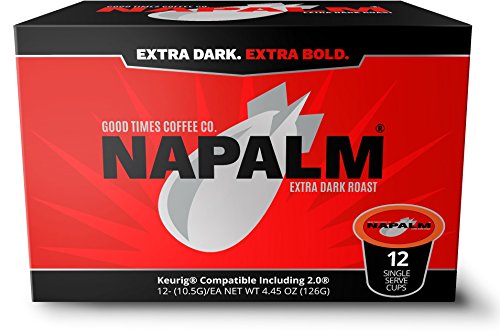 Napalm Coffee, EXTRA DARK ROAST, 100% Arabica, Single Serve Cups for Keurig K-Cup Brewers, 24 Count
$24.99
Buy Now on Amazon If you click this link and make a purchase, we earn a commission at no additional cost to you. Last Update: 2021-04-18

There’s nothing like the smell (or taste) of Napalm Coffee in the morning! Though they primarily use arabica beans, Napalm hand selects their beans and perfectly small-batch roasts them to give you a delicious dark roast to sip on throughout your shift at work. Napalm describes this roast as “extra dark, extra bold, extra strong,” and these K-Cups live up to this description.

Napalm’s K-cups are compatible with all Keurig brewers, including the Keurig 2.0. And when it comes to caffeine, Napalm doesn’t have a label to reveal exactly how much caffeine it contains per fluid ounce, but it’s roasted well enough to pack a big punch.

Things To Keep In Mind Before Buying

Before putting your money where your taste buds are, there are a few things to consider before beginning your search for the most caffeinated K-Cup coffees. There are plenty of coffees out there to energize you throughout the day, but there are a few characteristics and tips that can help you determine which ones may be best suited for you.

One of the largest contributing factors to how caffeinated your cup of joe can be is the roast level of your coffee. Contrary to popular opinion, light roasts actually carry more caffeine than medium or dark roasts, because the shorter roasting process doesn’t completely break down the caffeine molecules within the beans.

The Importance of Arabica and Robusta Beans

If darker roasts tend to have less caffeine in them, then why do these K-Cups have so much caffeine in them? In the case of most of the Keurig cups above, the caffeine content comes from the addition of robusta beans, as well as arabica beans. Most coffees use arabica beans because they are bolder, sweeter, and more complex in flavor, while robusta beans are usually more bitter, stronger, and more potent in taste–as well as caffeine content.

Often, coffees that are darkly roasted will use a combination of arabica and robusta beans to maintain the succulent flavors that result from the longer roasting process but to also have the same amount of caffeine as their lightly roasted cousins. Take our list, for example. Though all of the coffees on this list consist of medium and darker roasts, the available caffeine content is a result of the combination of arabica and robusta beans together.

At the end of it all, the barista also has control over the overall amount of caffeine in their cup. Though with a Keurig you’ll primarily be pushing buttons to select the brewing process instead of operating an espresso machine or utilizing more manual methods of brewing, you still have the option to control how large your cup of coffee is.

Most Keurigs have at most, five different options for brewing size, which are 4oz, 6oz, 8oz, 10oz, and 12oz. If you’re wanting a more concentrated brew, the smaller cup sizes will provide you with a more compact flavor and caffeination because of the smaller water volume used when brewing. Though you’ll still get a good dosage of caffeine by brewing the larger cup sizes, the potency will be more diluted.

Any of these coffee pods will provide you with a strong coffee due to the high caffeine content, the determining factor that will influence which option works best for you simply comes down to the flavor! Always make sure to keep track of the caffeine content in your coffee pods before brewing, and consult your doctor if you’re thinking of drastically increasing your caffeine consumption.

All of these brews are delicious options for the next time you have to work a double or stay up all night to study for your final exam. So have fun brewing with these extra-strong caffeinated K-Cups, and as always: 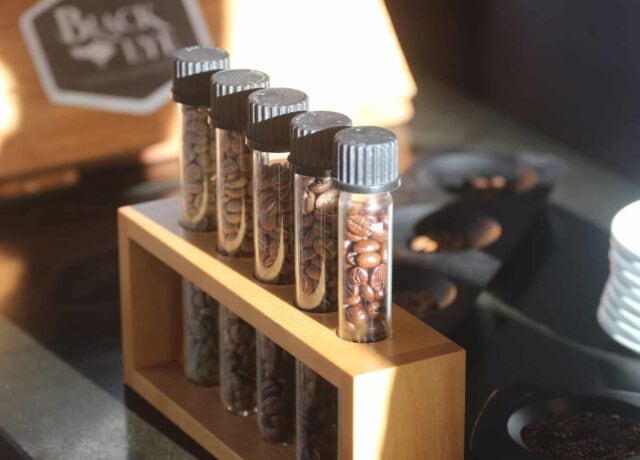 Best Flavored Coffee: Is it Doing You Any Flavors? 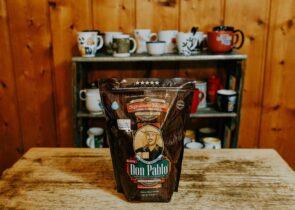 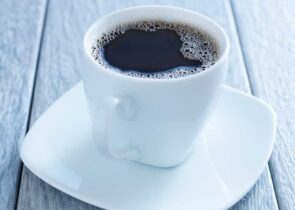 Bunn My Cafe Review: A Small, Industrial Design Can Go a Long Way 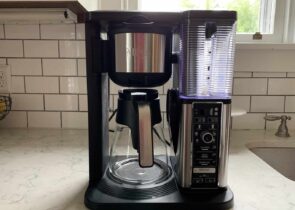 The Ninja Specialty Coffee Maker: All You Need In a Coffee Machine 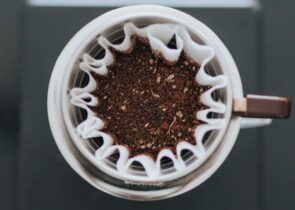