Flat White vs Cappuccino: A Break Down on the Milk-Based Debate

Anyone can appreciate a luscious, milky coffee from time to time. But if you have ever been drawn towards these velvety-looking delights, you have probably also noticed there are way more variations of the beverage than you expected to find. Fear not, we are here to help you sort through a couple of those options, so you can get a milk mustache from the drink of your dreams. 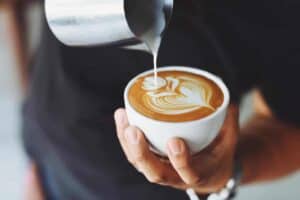 Read on for the low down on two milk-based coffee drinks: the flat white and the cappuccino.

Both the flat white and the cappuccino are milk and espresso-based drinks, like most coffees. Both of them involve mixing steamed or textured milk into one or two espresso shots. While the way the milk is prepared varies between the drinks, the espresso remains consistent.

If you are looking to make these drinks at home, chances are you will need an espresso machine, both for the espresso and the steaming wand needed for the milk components. But in case you are not ready to shell out a pretty penny to make these drinks in the comfort of your home, the below sections will still give you an idea of which one you should order at your local coffee shop.

The origins of the flat white are pretty hotly debated between Australia and New Zealand. Fraser McInnes of Café Bodega in Wellington stands in Australia’s corner facing off against New Zealand’s Derek Townsend of DKF Café. While McInnes coined the term “flat white” in 1989, Townsend supposedly invented the drink in 1984. Either way it has not been around as long as its other milk-based relatives.

While the makeup of a flat white varies depending on where you order it, it has a few basic components. Most notably, it is typically less dense than a cappuccino or a latte because it does not have any froth and uses a unique micro-foam that differs from regular steamed milk.

Flat whites are made by pouring purely textured milk (micro-foam) over a coffee component (usually 1-2 shots of espresso). They are served in smaller cups than cappuccinos, usually a ~5oz tulip cup. When you order this drink, you can expect a silky texture with zero frothiness. The flavor of the espresso features strongly because the flavor of the milk foam is more complementary than overpowering.

The cappuccino originated in Italy with the rise of espresso machines and was traditionally served “Viennese style,” featuring whipped cream and chocolate power or shavings on top. After Word War II, the drink evolved into what we know as today’s cappuccino, and it spread from Europe to America around 1980.

Thanks to their characteristic foam hats, cappuccinos are possibly some of the most recognizable coffee drinks caffeine addicts can find. They are usually served in 6 oz glass cups, slightly bigger than the 5 1/12oz cups used for flat whites (but smaller than a latte).

Cappuccinos are known for their definitive structure: 1/3 airy foam on the top and 1/3 steamed milk with 1/3 espresso on the bottom. The resulting drink is renowned for its low acidity and thick, creamy texture.

The preparation of the milk component of these drinks is really what differentiates them. The flat white is a smooth, velvet-like milk mixed with espresso to form a silky finish, and a cappuccino includes a thick, frothy top coat of foam covering a cup of espresso and steamed milk.

When you order a flat white, you are going to get micro-foam. This distinct foam is made by using a steaming wand, which steams the milk at a consistent, evenly-spread temperature, to froth the milk with really tiny bubbles. The key in this process is to keep the foam mixed into the milk throughout the entire process, rather than letting it sit near the top.

Unfortunately, some high-volume shops opt to omit the foam, not mixing it into the steamed milk and holding it back when pouring the drink. This modification results in a flat white that is basically a small latte with no foam on top.

However, if prepared properly, the micro-foam is free poured over the espresso to create a delicate, silky texture as the two liquids mix together. The result of this process should be a dark swirl on top of the espresso, which forms as the milk combines with the caramelized coffee.

On the other hand, cappuccinos have a distinct, airy foam on top. They feature an equal ratio of espresso, steamed milk, and frothed milk. The milk is steamed until it reaches 65 degrees Fahrenheit then compressed and poured into the espresso. The foam is held back until the end then poured on top.

This froth is not mixed into the drink and should fill about 1/3 of the cup. Like the flat white, the milk should not overpower the flavor of espresso underneath. If this drink is prepared correctly, you will get a drink with a definite structure with a dry, sweet foam top and a rich, milky espresso bottom.

Which One Should You Order?

Both of these drinks will have a pretty distinct espresso flavor and take well to added sweeteners or flavors, making them pretty adaptable to personal tastes. So, the question comes down to texture. If you are in the mood for something thick and rich or are in a high-volume coffee shop, go for a cappuccino. If you are looking for something a little bit lighter and silkier or want to get a feel for a barista’s brewing talents, order a flat white.

13 Reasons Your Coffee Tastes Bad and How to Fix it