The Jura D6 and the Jura E6 are entry-level super-automatic espresso machines that brew just a few classic coffee specialties, but they do it very well. While the E6 has some tempting upgrades, it does come with a higher price tag, and for our money, we’d save some cash and go with the D6.

The Jura D6 and Jura E6 are two of the entry-level options Jura makes. While the E6 is the more upgraded model, are the upgrades worth the price jump? Let’s take a closer look at these two machines to see which one is right for you. 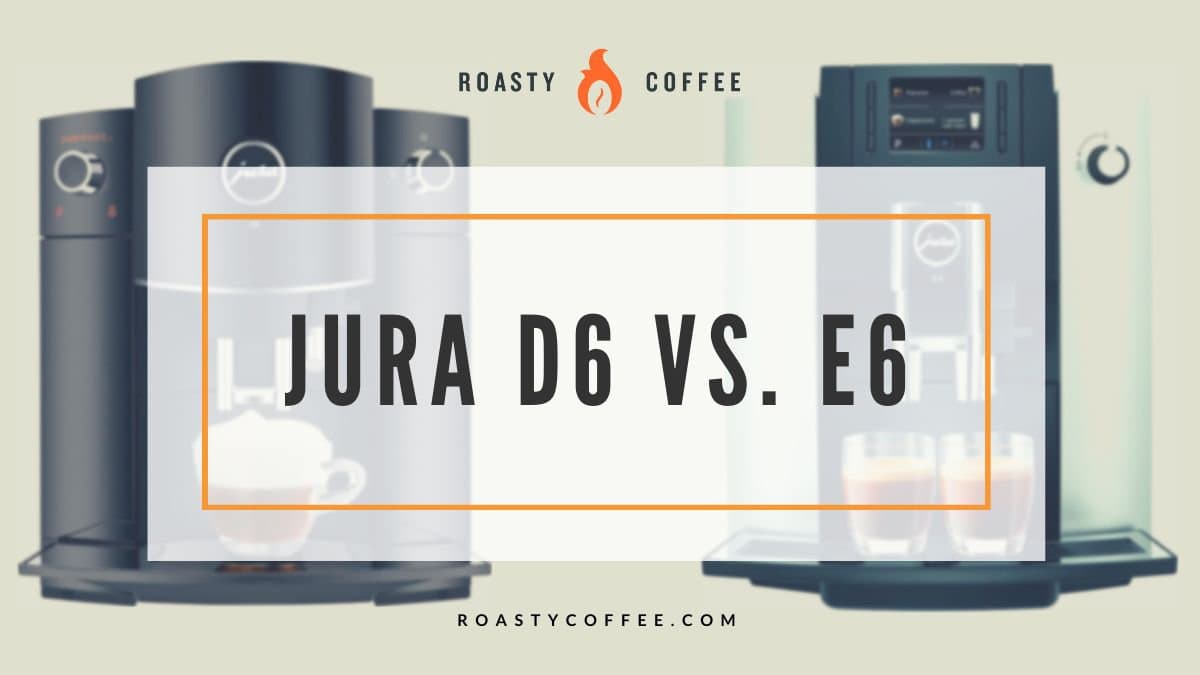 The Jura D6 and Jura E6 have a lot in common. Let’s start by reviewing the features that they share.

It’s not the lengthy menu you’ll find on many Jura machines, but the famous Jura quality is there. If you’re looking for more specialty coffee drinks, read our comparison of the E6 and the Jura E8.

The user needs to adjust a dial on the D6 and E6 from milk foam back to coffee during the cappuccino brewing process. While that’s easy enough, it’s just a little more work than some of Jura’s higher-end one-touch machines.

The Jura D6 and the Jura E6 are both incredibly easy to clean. They have integrated cleaning, rinsing, and descaling programs. If you’re investing in a machine like this, it’s great to know it will be easy to keep in tip-top shape.

Both machines can also be outfitted with a Clearyl water filter, which filters the water and prevents limescale from building up within the machine.

Jura espresso machines are known for making excellent cups of coffee and espresso.

One feature that makes this possible is Jura’s Pulse Extraction Process (P.E.P.), which is a process that pushes water through the grounds in short bursts to extract the best possible flavor.

The D6 and E6 are also compatible with Jura’s J.O.E. app, so technophiles are in luck. This app can operate your espresso maker through your smartphone or Apple Watch.

The Jura E6 has more customization options than the D6, with eight levels of coffee strength rather than just four. Super-automatic machines don’t give the coffee drinker much to control, so it can be nice to have the ability to fine-tune the strength.

The E6 also has three temperature levels for hot water, which is helpful for brewing different types of tea.

The Jura E6 has an upgraded grinder, the AromaG3, compared to the D6’s AromaG2. The AromaG3 allows the coffee to be ground more quickly, quietly, and with greater precision.

Another E6 upgrade is the display. The 2.8-inch color display is a big change from the plain text display on the D6. It feels more fitting for a high-end appliance like this.

Overview of the Jura D6 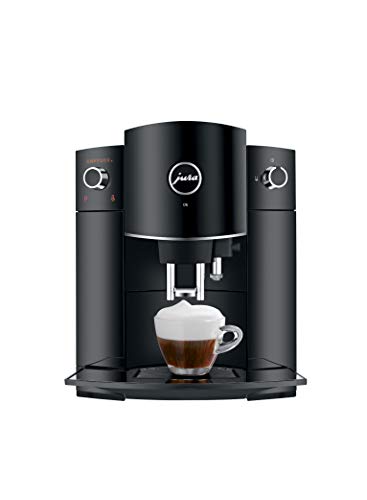 Jura D6 Automatic Coffee Machine, 1, Black
Check Price on Amazon If you click this link and make a purchase, we earn a commission at no additional cost to you. Last Update: 2022-12-05

The Jura D6 is a super-automatic espresso maker that can brew the classics: espresso, coffee, and cappuccino. It can also make two coffees or two espressos at once and dispense hot water and hot milk foam.

The D6 looks sleek and stripped-down and operates via a rotary dial and a simple text display. The simple display is a little unusual nowadays, but it works well.

The D6 has a 64-ounce water reservoir and a 7-ounce bean hopper, which should be large enough that most households won’t constantly refill the reservoir.

Overview of the Jura E6 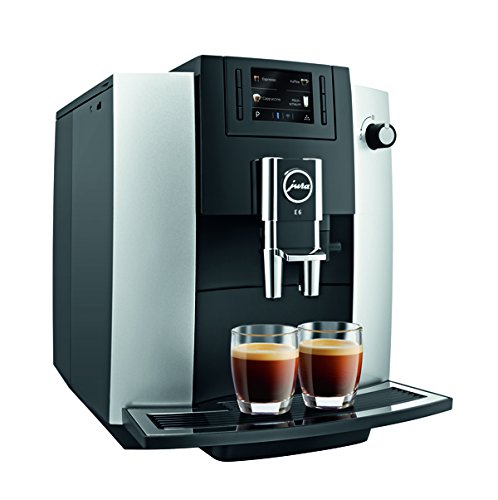 Jura E6 Automatic Coffee Center, Platinum
Check Price on Amazon If you click this link and make a purchase, we earn a commission at no additional cost to you. Last Update: 2022-12-04

The Jura E6, like its sibling, the D6, can brew espresso, two espressos, coffee, two coffees, or a cappuccino. It can also dispense hot water or milk foam.

The E6 is operated via a 2.8-inch color display. The color images of the drinks to be prepared really add to the luxury feel of this espresso maker.

The E6 has a 64-ounce capacity water tank and a 10-ounce coffee bean hopper. It is equipped with an AromaG3 grinder for quieter, quicker, and more precise grinding. We know we don’t have to tell you that the grind is really important to coffee flavor, so an effective built-in grinder is something to celebrate.

The Jura D6 and Jura E6 coffee makers are entry-level super-automatic espresso machines that can make a small menu of classic beverages.

While both live up to Jura’s well-known quality standards, the E6 has a few upgrades that set it above the D6, like the improved AromaG3 conical burr grinder and the color display screen.

The E6 upgrades are great, but we aren’t sure they justify the price jump between the two models. To get more features at just a slightly higher price point than the E6, we’d consider jumping to the ENA 8.

If you prefer to stick with a more basic machine, the D6 offers most of the features of the E6 but at around two-thirds the price.

The 6 Best Sugar-Free Coffee Syrups for 2022

Ethiopian Coffee: Birthplace of the Beans