When you’re looking for an all-in-one coffee machine that grinds beans, foams milk, and makes either coffee or espresso, the Jura Micro 9 is hard to beat.

However, if you’re just starting on your coffee maker purchasing journey, you may not be sure about what features to look for in a coffee maker. In this article, we’ll help you to understand the functions of the Jura Micro 9 so that you can judge whether it might be the right choice for you. 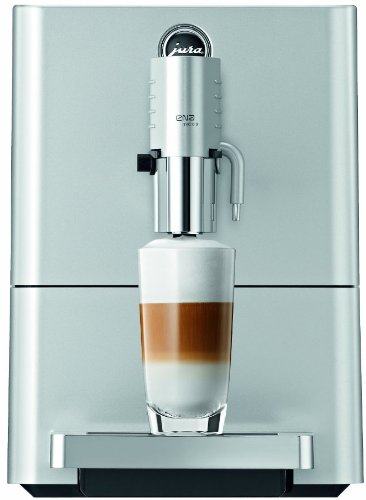 Jura ENA Micro 9 One Touch Automatic Coffee Machine
Check Price on Amazon If you click this link and make a purchase, we earn a commission at no additional cost to you. Last Update: 2022-01-17

Factors To Think About Before Buying A Coffee Maker

Coffee machines vary dramatically in their capabilities and the amount of hands-on effort that you’ll need to invest in them before getting a cup of your favorite beverage. In particular, the abilities you’ll need to think about the most before buying a coffee maker are:

To help you place these capabilities in context, in this section, we’ll discuss each of them separately.

Not all coffee machines are capable of making true espresso, but some can make a good attempt. Similarly, some coffee machines make no overtures to espresso whatsoever and focus only on brewing large pots of coffee.

The Jura Micro 9 falls into the middle category of coffee machines. This means that it can make a good attempt at making an espresso, but it can also make an excellent cup of normal coffee.

However, there is an important caveat to consider: espresso-capable coffee machines rarely have the throughput necessary to produce high volumes of brewed coffee.

In other words, if you have a large family who will want a large pot of coffee in the morning, espresso-capable machines are probably going to leave people waiting.

Some coffee machines can steam milk to create foam, thereby enabling brewing of beverages like cappuccinos, cortados, and lattes. For people who love their milky espresso beverages, milk steaming is a critical feature that many coffee machines don’t get right.

On the other hand, for people seeking a simple pot of coffee from their coffee maker, milk steaming capabilities are not very useful.

As mentioned previously, coffee makers differ regarding their maximum output of coffee at any given time. The Jura Micro 9 is intended for single-cup coffee brewing rather than brewing multiple cups at the same time through a drip system. 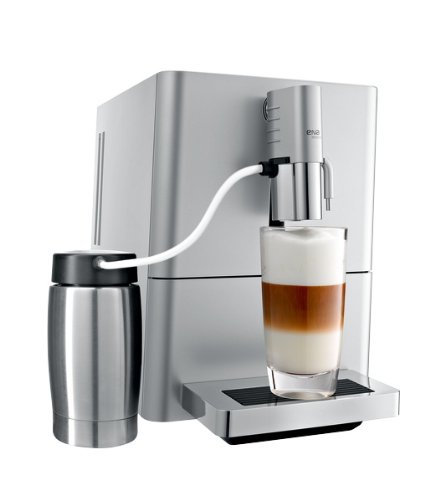 The Jura Micro 9 is a single-serving coffee maker that can produce drip coffee, espresso, and foam for milk-based espresso beverages. It also has a grinder, an intuitive user interface, and easy-to-clean mechanisms.

With the Jura Micro 9, you’ll be able to make your favorite coffee beverages rapidly and effectively so long as you keep the unit stocked with fresh beans, milk, and water.

The reservoirs for beans, milk, and water are plentiful, giving the machine the ability to make as many as ten beverages in succession before requiring a reload.

In comparison to similar units like the DeLonghi ECAM, the Jura Micro 9 is easier to use, has a sleeker aesthetic, and has a smaller footprint on your kitchen counter.

However, the DeLonghi’s size gives it larger reservoirs for beans, water, and milk, meaning it doesn’t need to be refilled as frequently.

On the whole, these features put the Jura Micro 9 in a very competitive position within the coffee machine market.

The Jura Micro 9 also has room to improve with a few of its features such as:

In the next section, we’ll delve into more detail about the Jura Micro 9’s features so that you can judge whether its strengths suit your brewing needs.

The Jura Micro 9 has a number of core features which you should know about. In this section, we’ll discuss each of these features in-depth so that you can understand how they work and why you might be interested in them.

The Jura Micro 9 has two spouts located within its nozzle. This means that if you want to produce a double espresso or a cappuccino with two shots of espresso, you can do so without needing the system to prepare two separate shots.

In practical terms, the dual spouts guarantee that you can create your beverages more rapidly than you could otherwise. Thanks to the Jura Micro 9’s automatic cleaning functionality, however, you won’t need to perform twice as much cleaning on the system when you’re done.

The spouts and nozzles on the exterior of the machine make up the machine’s group head. On the Jura Micro 9, the group head can be adjusted upward or downward, depending on the height of the vessel that you’re brewing your coffee in.

While the adjustable group head may seem like a small feature in the big scheme of things, in reality, it’s an essential quality of life feature that makes the machine much more graceful to use.

Importantly, many other coffee machines lack an adjustable group head, so the Jura Micro 9 has a significant advantage in this feature category.

The Jura Micro 9’s bean grinder is easy to use, highly configurable, and highly effective. Before each beverage is brewed, the beans are ground and moved into the brewing chamber.

This means that if you have a specialty coffee that requires specific brewing settings, the Jura Micro 9 will help you to make the most out of them.

Especially if you only use whole beans when you brew your coffee, the convenience of the machine’s built-in grinder will be palpable. Alternatively, if you prefer to use pre-ground coffee, you may find that the Jura Micro 9 doesn’t offer you anything special in the grinder department.

For all coffee-based beverages that should contain espresso, the pressure output of the machine’s pump is a critical consideration. With the Jura Micro 9’s high-pressure pump, the machine produces nearly 15 bar of pressure when it brews espresso.

While this metric is impressive for a coffee maker, it doesn’t reach the level of pressure exerted by a true espresso machine. Nonetheless, Jura Micro 9 produces a great cup of espresso that rivals the quality of many dedicated espresso machines.

Keep in mind that the higher the pressure of the pump, the more likely a machine is to need extensive maintenance. Because the Jura Micro 9 keeps pressures in check, it won’t need any maintenance in comparison to an espresso machine, which can exert more pressure.

For true coffee fanatics, it isn’t optional to control the size of the coffee grounds, the temperature of the water, the pressure of the pump, and the duration of the brewing.

However, for many less-advanced coffee machines, the options for programming brewing are very limited. With the Jura Micro 9, however, the granular details of brewing protocols are at your fingertips.

You won’t need to read the manual to figure out how to program the brewing protocol of your choice and save it to the machine’s memory. As a result, once you lock in the protocol that delivers the best quality coffee beverage of your choice, you can make it again and again.

The one thing you may find slightly lacking with the Jura Micro 9’s programmable beverage system is that it can’t be programmed with respect to time.

If you want to initiate brewing, you will need to manually activate the machine with the preset recipe of your choice at the time of consumption.

Highly mineralized water is the scourge of coffee makers and espresso machines everywhere. When the pipes within a coffee machine mineralize as a result of hard water, they eventually cause cracks or blockages, which can damage or destroy the machine.

In the best of circumstances, coffee machines have a filter system in place to catch excess mineral content in the water before brewing. Then, the user can identify when the filters are saturated with minerals and replace them accordingly.

With the Jura Micro 9, you’ll get the best of both worlds. The machine has a software-based water hardness adaptation system to ensure that the machine stays in good health despite the prevailing conditions of the water.

Furthermore, the machine also has a built-in filtration system, which it uses to adapt to the hardness of the water. The software also alerts the user when the filtration system requires cleaning or maintenance.

Finally, if the user desires, you can run a deep cleaning protocol using a commercial de-mineralizer solution, which the machine’s hardware will use as gently as possible to ensure that the machine remains in good condition. 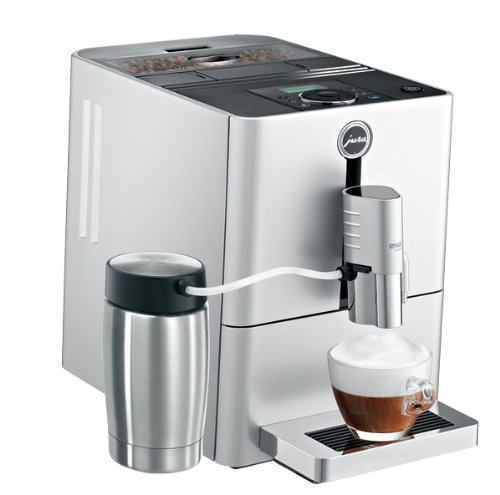 The Jura Micro 9 is a great coffee maker on account of its programmable brewing presets, highly durable mechanisms, ease of use, and its high-pressure pump system.

When you purchase the Jura Micro 9, you’ll get a fully-featured coffee maker system that’s ready for fancy coffee beverages or day-to-day caffeination. Whether you want a cup of plain coffee or a cortado, you can make it with the Jura Micro 9.

In fact, you can also experiment using the system’s programmable brewing and grinding features to make entirely new coffee-based beverages if you choose to do so. The only limitation will be your imagination and the type of coffee beans that you have on hand.

However, Jura Micro 9 may not be the best choice for everyone.

In particular, if you would prefer to brew large volumes of drip coffee rather than milky coffee beverages, the Miele Lotus might be a good alternative. While the Jura Micro 9 is better in most respects, the Miele Lotus can fill the need for large pots of coffee more effectively.

Likewise, while the Jura Micro 9 is more intuitive to use, the Miele Lotus is better for free-form experimentation because it doesn’t have a software system to regulate brewing and cleaning.

Finally, the Miele Lotus has a smaller footprint on your counter than the Jura Micro 9 despite being taller and heavier. While neither machine is particularly mobile, you’ll have an easier time moving the Jura Micro 9 from place to place.

Jura ENA Micro 9 One Touch Automatic Coffee Machine
Check Price on Amazon If you click this link and make a purchase, we earn a commission at no additional cost to you. Last Update: 2022-01-17

This concludes our review of the Jura Micro 9 coffee machine. If you’re considering a purchase, remember that the Jura Micro 9 sits between drip coffee makers and dedicated espresso machines when it comes to its capabilities and strengths.

Likewise, remember the Jura Micro 9 is a powerful generalist machine that can tackle most types of coffee-based beverages that you might want with significant competency.

While you might be able to find a machine with a higher capacity for producing drip coffee, you’ll have a hard time finding a machine that’s as programmable and customizable as the Jura Micro 9.

Good luck with your coffee brewing voyage, and don’t forget to purchase fresh beans for the best results.