Jura WE6 vs. E6: A Review and Comparison of Two Automatic Espresso Machines

The Jura WE6 is a good choice for a workplace where many coffee drinks are made daily. For anyone else, the Jura E6 is a better-priced, more versatile alternative.

The Jura WE6 is the most entry-level of Jura’s workplace coffee machines. Let’s look at how it compares to the Jura E6, a comparable model in the home products line. 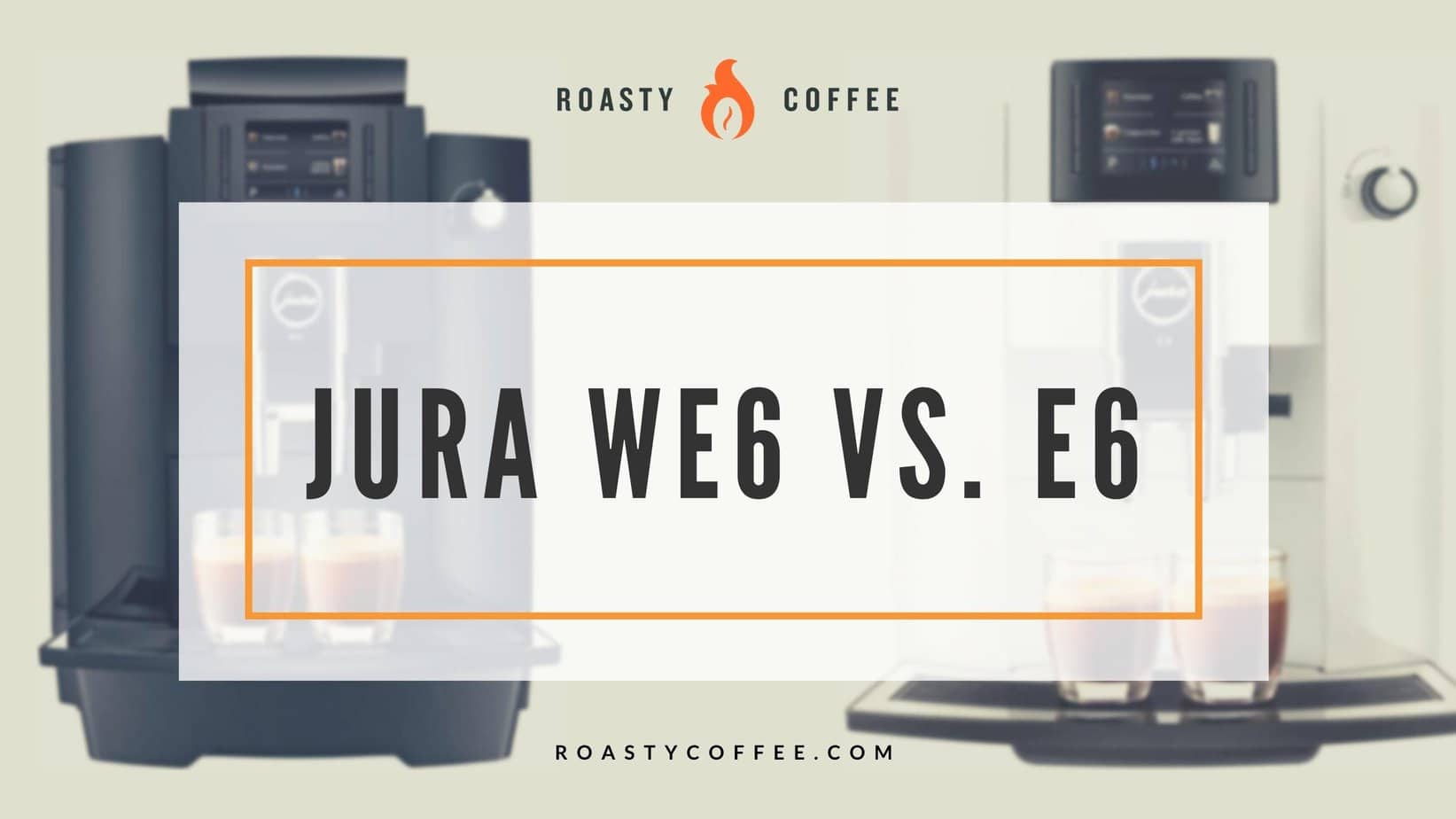 Jura WE6 vs E6: Brewing Options

A quick look at the specs for the Jura WE6 and the Jura E6 shows us that the WE6 has eight brewing options, while the E6 comes in just below with seven options. However, the E6 serves up more variety.

Brewing With the Jura WE6 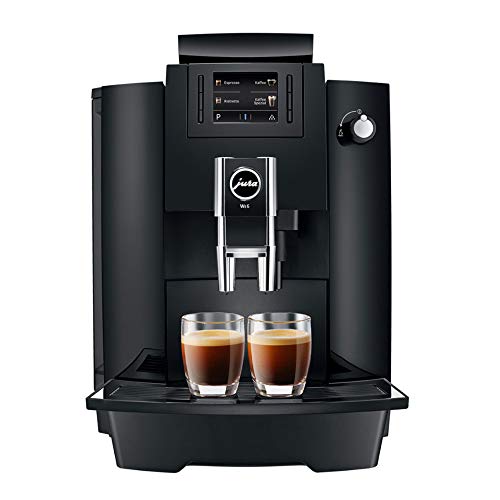 Jura 15343 WE6 Coffee and Espresso Center (Piano Black)
Check Price on Amazon If you click this link and make a purchase, we earn a commission at no additional cost to you. Last Update: 2022-12-04
Need Gift Ideas For A Coffee Lover We’ve got 29 unique gift ideas for 2022 for all budgets Click here to check them out

The Jura WE6 does not have a built-in milk frother, so you won’t be making any milk-based coffee specialties like lattes or cappuccinos. The WE6 can brew the following beverages:

If you love black coffee and espresso straight-up, this might be the perfect machine for you. However, if you enjoy a daily cappuccino, the Jura WE6 will leave you wanting.

Eight coffee strength levels and two temperature levels are available, and you can also adjust the volume of your beverage.

Brewing With the Jura E6 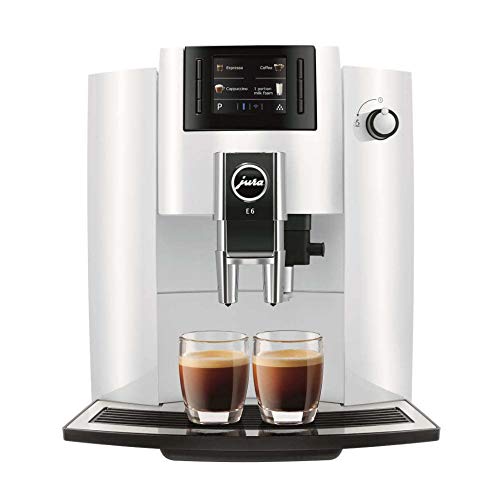 Jura E6 White Super Automatic Coffee Center
Check Price on Amazon If you click this link and make a purchase, we earn a commission at no additional cost to you. Last Update: 2022-12-04

The Jura E6 does have a built-in milk frother, although it only produces cappuccino foam. (If you’re looking for a wider variety of milk-based beverages, you’ll have to look elsewhere).

The Jura E6 can brew the following beverages:

The Jura E6 and WE6 have similar customizability. The E6 has eight strength levels and two temperature levels. You can also adjust the hot water temperature with three available temperature settings.

Neither of these coffee makers has a bypass chute for pre-ground coffee, but we think you’ll enjoy freshly ground coffee more, anyway.

Once we’re past the absence of the milk frother in the WE6, perhaps the biggest difference between the Jura WE6 and the Jura E6 is the size of the water tank, bean hopper, and spent grounds container.

The WE6 is made to serve many people daily, such as in an office setting. For this reason, the 2.9-liter water tank dwarfs the 1.9-liter tank on the E6, and the bean hopper holds 17.7 ounces of beans (compared to 10 ounces for the E6).

The WE6’s spent grounds container holds 25 servings before it must be emptied, while the E6 only holds 16 servings.

Its larger overall capacity makes the WE6 better suited for a small office or other location where around 30 coffees are made daily. It may also be more convenient for a very large family or household than the E6.

Jura WE6 vs. Jura E6: Display, Connectivity, and Controls

The Jura WE6 and Jura E6 are both operated via a 2.8-inch color screen with buttons on the front of the machine. They are also both compatible with Jura’s app and Siri.

Jura WE6 vs E6: App Connectivity

Both the Jura WE6 and the Jura E6 can be operated with Jura’s app, called J.O.E. Once you have the app set up, you can use your phone, your Apple Watch, or Siri to control your coffee maker.

In terms of connectivity, the key difference to note between these two espresso machines is that the Smart Connect transmitter you’ll need to connect your phone to your Jura comes standard with the WE6 but must be purchased separately if you buy the E6.

Jura WE6 vs E6: Controls and Programmability

The Jura WE6 and the Jura E6 both allow you to program the water volume, brew-strength level, and temperature so that your favorite beverage is made the way you like it every time.

The volume and strength level are also individually adjustable. This means that you or a guest can change the settings for one drink without making an adjustment to the permanent settings.

This could be useful in a place like a waiting room, where the machine owner wants to only make certain options available and doesn’t want to worry about someone accidentally changing any settings.

The Jura WE6 is around 30% more expensive than the Jura E6. Whether or not the cost difference is justified depends on your intended use.

If you need a coffee machine for a setting like an office or waiting room where many drinks will be prepared each day, it might be worth splurging on the WE6. It has a huge water reservoir, a larger bean hopper, and can hold more spent grounds.

If you are looking for a coffee maker for home use, there’s no reason to pay more to get the WE6. The E6 still has a sufficiently large water tank and bean hopper for a family, and the built-in milk frother is a major benefit.

It’s worth mentioning that neither of these machines is considered budget-friendly. Sure, the expense might be worthwhile for some coffee lovers, but if you’re in the market for something more entry-level, you’ll want to look elsewhere.

Instead of a steady stream of water, the Pulse Extraction Process sends short bursts of pressurized water through the coffee grounds. This allows for maximum flavor extraction.

Jura loves to come up with fancy names for its technologies, and the Intelligent Pre-Brew Aroma System is one example. Don’t let the name intimidate you, though — the concept will be familiar to most coffee aficionados.

The IPBAS chooses the right amount of water to pre-brew the coffee, which means the grounds are dampened slightly just before brewing. This helps the flavor to fully develop.

You can learn more about the science of that process here, but believe us when we say that pre-brewing is integral to great flavor.

The Jura WE6 and Jura E6, like all of Jura’s coffee machines, have built-in grinders. This makes it super convenient to prepare a single serving of coffee or espresso with coffee beans that were ground immediately before brewing.

Many brands have the “single-serving” and “convenient” part of the equation covered, but freshly ground beans are a nice upgrade from many single-serve coffee machines like Nespresso or Keurig.

The Jura WE6 is designed for the workplace, and that’s the only real reason to choose this machine. If you need a fully automatic coffee maker that will serve great coffee and espresso to many people each day, go with the WE6.

The huge 2.9-liter water reservoir, larger bean hopper, and bigger used ground container will make the WE6 more convenient for a large group. The ability to lock down the programmability features could also be a benefit if many people will be fiddling with the machine daily.

However, the Jura E6 is a clear winner if you’re looking for a coffee machine for a household. You’ll pay less and gain a built-in milk frother for those afternoon cappuccinos.

How To Clean A Keurig Needle Without A Tool

How To Clean A Keurig Coffee Maker The Right Way