It’s not uncommon for people to have a special occasion wine — you know, the expensive bottle they’re waiting to crack open until something particularly amazing happens. However, when serious coffee lovers want to celebrate, they don’t turn to a top-shelf wine. Instead, they pull out a bag of the fanciest, most expensive coffee beans they can find.

Enter Gesha coffee. This stuff is the cream of the coffee crop, and Bean & Bean Coffee Roasters’ Gesha beans are a popular pick among those who swear by this unique brew. But what is it exactly? What makes this exotic coffee so special, and is it worth the high price tag? Read on for the answers to these questions and more! 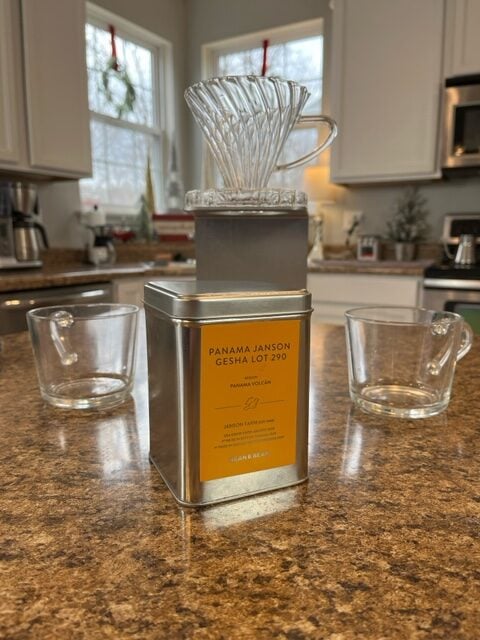 Are they Gesha or Geisha coffee beans?

Before digging into Bean & Bean’s Panama-grown Gesha coffee specifically, we should probably clear up a few things about this coffee variety as a whole, starting with the name of the brew: which is the correct term, Gesha or Geisha?

Richard Whalley found this coffee in the 1930s in southwest Ethiopia’s Gori Gesha forest and named it after the region where it originated. Somewhere along the way, though, the Ethiopian coffee plant’s name was misspelled during recordkeeping, and they became widely known as Geisha coffee plants.

Now, if you’ve ever heard of a Japanese Geisha artist, you understand why this error caused some confusion. The addition of an extra letter has caused many to associate the coffee bean variety with Asian Geisha performers though the two are unrelated. To make matters even more confusing, some coffee bags — even those manufactured by respected and popular coffee producers — are marked with images of Geisha artists, despite them having nothing to do with the one-of-a-kind coffee variety.

We want to be as clear, accurate, and respectful as possible. So, for the duration of this article, we’ll avoid using the inaccurate spelling. Besides, Bean & Bean uses the correct term on its label, and since we’re talking about a specific product, we want to stay consistent with its packaging. However, don’t be surprised if you see other brands, sites, or coffee aficionados using the technically inaccurate term, Geisha beans.

Bean & Bean Coffee Company is no stranger to the specialty coffee scene. Mother-daughter duo Rachel and Jiyoon Han have been in business since 2008.

These international coffee buyers and Q Arabica Graders (who are, in their words, “sommeliers of coffee”) aim to bridge the gender gap in the specialty coffee industry by sourcing as much female-powered joe as possible. As of now, more than half of the company’s entire supply of java is produced by women.

Gender equity in the coffee industry isn’t the only thing Bean & Bean is passionate about. The company also contributes to efforts to protect sloths from deforestation by donating a percentage of its online sales to The Sloth Institute. 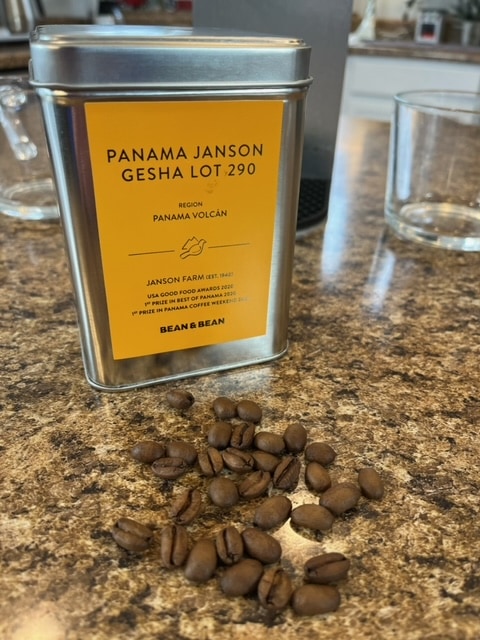 Gesha coffee is known to have some of the highest cup scores in the world. This natural processed Gesha coffee is wildly complex, with intense sweetness and clarity.

Is Bean & Bean Panama Gesha any good? How much does it cost? Does it have to be brewed differently than regular coffee? Keep reading to discover the answers to those questions and more!

Like most Gesha/Geisha coffee beans, Bean & Bean’s joe comes from Panama. More specifically, each Panamanian coffee bean plant that provides this brand’s product grows on the well-known Janson Coffee Farm. The farm, established in 1941 by Swedish immigrant Carl Axel Janson, has a reputation for creating batch after batch of this top-quality arabica coffee.

Farmers on this plantation don’t use any harmful pesticides or herbicides when growing this coffee bean plant. Leaving those chemicals out of the soil and using enzyme microorganisms keeps a balance of nutrients in it. And when those nutrients make it to the coffee plant, its beans are more likely to brew a better cup of coffee.

Now to answer the million-dollar question: does this coffee taste good? Technically, you’re the only one who can answer that question, but since more than a few average coffee drinkers think Gesha is a top-notch coffee varietal, it’s safe to assume it’ll be good. At the very least, it’ll taste better than that lousy gas station coffee you choke down during your commute or the cheaper coffee beans you found on the bottom shelf at the grocery store.

Bits of white sugar and black tea complement its flavor profile, creating a brew perfect for getting the day off to a sweet start. Not to worry, though; even if the sweetness of this joe is noticeable, it’s not overwhelming or too intense.

Note that like most other quality Gesha coffees, this type of coffee is best enjoyed black so that you may fully experience all its delicate flavors. Besides, it’s got a light, tea-like quality, which some say makes it incompatible with milk.

We at Roasty can’t say for sure whether this batch of beans from Janson Lot 290 is the absolute best or not, as we haven’t sampled all the Gesha coffee brands on the specialty market. However, the good folks at the 2020 Best of Panama coffee auction and the 2019 Panama Coffee Weekend thought it was amazing coffee. It earned first prize at both coffee championships and recognition at the USA Good Food Awards of 2020.

However, winning an award at a coffee competition doesn’t make a product suitable for everyone’s taste buds; the only way to really know if the taste of this coffee suits your preferences is to sip it yourself.

Panama Gesha coffee tends to come at a hefty price, especially compared to a bag of beans you’d find at Target, Publix, or Walmart. Expensive coffee might be a dealbreaker for some java enthusiasts, but if you’ve got the cash to spare and are itching to find out if the Gesha coffee varietal lives up to the hype, then, by all means, get your hands on a batch of this joe.

If you aren’t crazy about the idea of paying more than a few bucks for joe or aren’t much of a coffee geek and don’t care much about the quality of coffee in your cup as long as it’s got caffeine, then you’ll probably be just as content with something that costs less.

You can prepare your cup of Gesha coffee using whatever brewing method you prefer, but if you hope to make the best of your (rather expensive) batch of beans, there are a few tips to keep in mind. 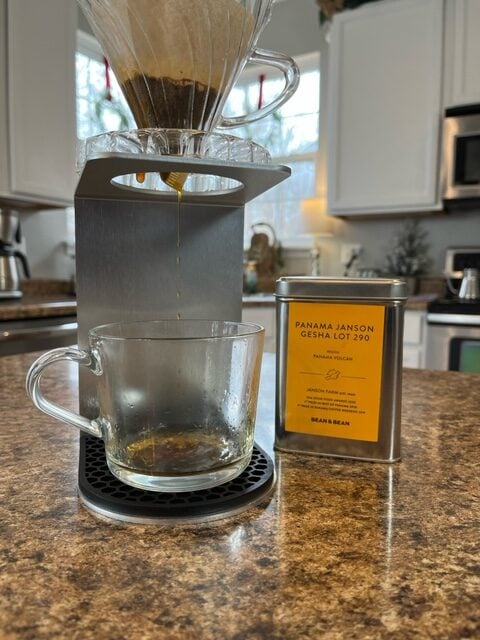 Getting to Know Gesha Beans

Where is Gesha coffee grown today?

The majority of the world’s Gesha coffee sold today comes from Panama, as the region — specifically the area around the Volcan Baru — offers the perfect climate for growing the stuff. However, it’s not uncommon to find these beans growing in Costa Rica and in the Ethiopian region for which they were named.

The thing that makes Gesha coffee so noteworthy is — you guessed it — the way it tastes! When these beans are brewed, the resulting fruity flavors, combined with a jasmine aroma, make a cup of coffee that java enthusiasts across the globe go crazy for.

But there’s more to Gesha coffee’s uniqueness than its flavor. The plant is one-of-a-kind compared to other coffee trees for several reasons. First, Gesha coffee plants only thrive in specific environmental conditions, like high altitudes, for example. The Elida Geisha Coffee Estate, for instance, grows its joe at heights of nearly 6,000 feet.

Gesha coffee growers must also care for their plants longer and more carefully than other java farmers. These plants’ elongated leaves are more susceptible to attack by coffee diseases or fungus, and they take longer to yield fruit. While the average coffee plant reaches maturity between three and five years of age, Gesha trees mature after a lengthy eight-year period.

Why is Gesha coffee so expensive?

You won’t find good Panama Gesha coffee (or even Gesha coffee grown elsewhere, like in Costa Rica, for example) on the shelf with the bargain beans at your local grocery store. In fact, you might need to save up for a while before adding a bag of this coffee phenomenon to your cart — a pound of this stuff can cost $600 or more! Single cups of coffee sell for $75 in California! This high price tag results from difficult growing conditions, plus the considerable demand for these beans that outweighs their limited supply.

Gesha isn’t the only joe variety that falls into the high-end coffee category. Coffee snobs also pay a pretty penny for something called civet coffee (which is also called kopi luwak or cat poop coffee — yep, you read that correctly). You can read all about it here.

Maybe you’re itching to give Gesha coffee beans a try, but you want to explore your options before committing to a product with such an expensive price tag. That’s why Roasty’s guide to the best Gesha beans exists. The article includes a list of our favorite bags of Gesha joe, including Hayman Coffee’s Panama Geisha coffee and an offering from legendary coffee estate Hacienda La Esmeralda in Panama, plus more detailed information about this special coffee bean variety.

If you don’t want to buy beans to brew yourself, though, you’ll need to do a bit of research to find coffee shops that serve up Gesha java, like Panama City’s Bajareque Coffee House or Leto Coffee Brew Bar San Francisco (which is not, in fact, in California).

Finding a chain of specialty coffee shops in the U.S. with Gesha brew on its menu may prove to be a more challenging feat. Only a handful of American coffee shops serve batches of this brew, and typically, they only keep limited supplies of these beans in stock. 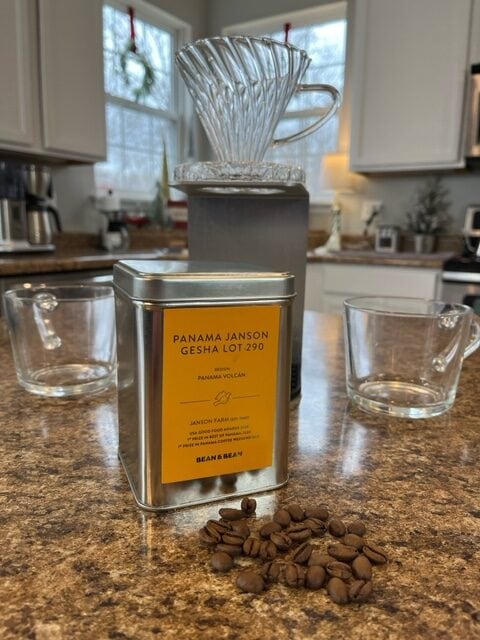 Is it worth the hype?

Gesha coffee is known to have some of the highest cup scores in the world. This natural processed Gesha coffee is wildly complex, with intense sweetness and clarity.

Its high price tag keeps Gesha/Geisha coffee from being listed among the most popular varieties of beans out there, but don’t let the fact that the average coffee lover is not drinking it keep you away from it. If you’re a coffee connoisseur and have a few extra bucks to spare, give Gesha a go and let Bean & Bean’s product be your introduction to the stuff.

It’s not necessarily an everyday coffee, but enjoying a cup of Gesha every once in a while — maybe to mark a special occasion — is an excellent way for a serious coffee lover to treat himself.

Baratza Virtuoso: Is it Better Than Ever?

What Is the Best Coffee for Chemex?

The Top 24 Most Comical Coffee Signs