Instant coffee is a quick and convenient way to get your morning buzz in for the day. Simply stir the fine powder into your hot water, and you’ve got morning coffee! But you may be wondering how much caffeine is in that cup of instant coffee and how it stacks up against other kinds, like traditional coffee and espresso.

Whether you’re trying to cut back on caffeine in general or looking to find the brewing method that will get you wired for your day, read on to learn about the surprising facts surrounding instant coffee and caffeine. 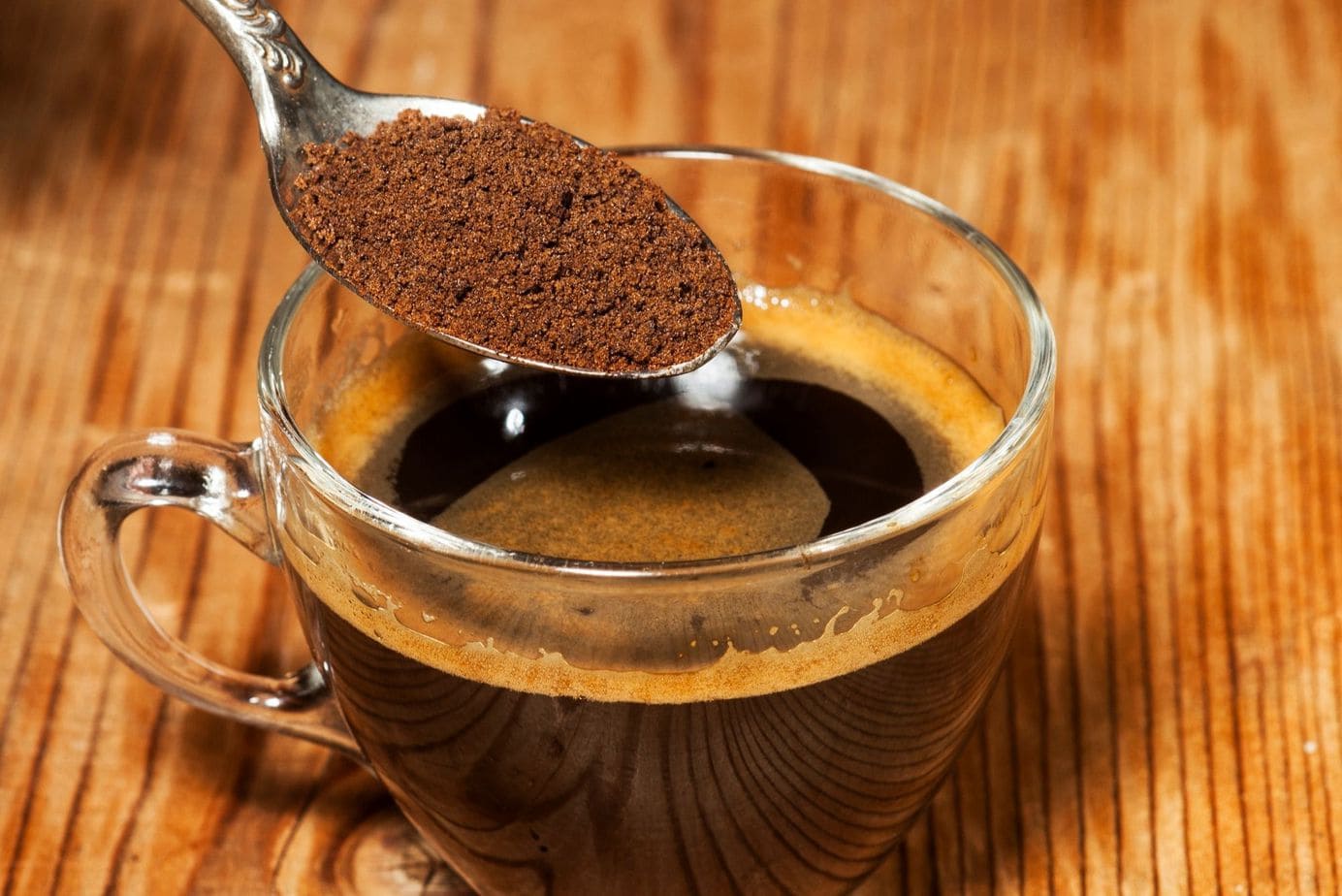 How much caffeine is in instant coffee?

Usually, a 6-ounce cup of instant coffee will contain an average caffeine content of about 47 grams, which is actually slightly less than other methods of brewing a traditional variety of coffee.

The reason is the brewing method; instant coffee is not dried and ground coffee beans. It’s dried normal coffee that already had water added to it before being dried into coffee granules. Adding more water to the coffee actually makes it a less concentrated coffee than a standard cup, meaning it will have less caffeine per ounce.

How does that compare to brewed coffee or espresso?

Since instant coffee seems like a more concentrated version of regular ground coffee beans, it’s probably got more caffeine in it, right? Well, no. Instant coffee has slightly less caffeine than other brewing methods. Regular drip coffee contains about 95 milligrams of caffeine in an 8-ounce cup.

Instant coffee also has much less caffeine than a cup of the strongest coffee, espresso, by a long shot. Espresso is packed with flavor and richness, but it’s also packed with caffeine, at about 64 milligrams of caffeine per ounce, or 96 milligrams per 1.5 ounce shot of espresso, which is about eight times the caffeine content as instant coffee!

You’ve probably heard many differing reports on whether caffeine is good or bad for you. The real answer depends on your intake, your personal caffeine tolerance, and how often you go overboard. Caffeine on its own can have lots of health benefits, but too much can cause all kinds of problems.

What is the daily recommended amount of caffeine?

The Nutrition Source at Harvard University reports that the average adult only consumes about 135 milligrams of caffeine a day. In comparison, the U.S. Food and Drug Administration puts the safe limit of daily caffeine intake at 400 milligrams.

Since a 6 ounce serving of instant coffee only contains about 47 milligrams of caffeine, you’ll likely stay well within the safe limit of 400 milligrams, which is great news for your morning routine!

However, there are other ways to get caffeine in your system during the day, so be careful not to overdo it! You may not hit this limit with your coffee, but you can get additional caffeine in your diet through things like chocolate and candy, tea, gum, energy drinks, and more.

Can too much caffeine be a problem?

Caffeine has several health benefits, and it’s a great way to get you going in the morning, but it’s important not to go overboard since too much caffeine can actually be harmful to your system.

It’s always important to talk to a doctor if you’re worried that you’re getting too much caffeine, but if you’re only drinking one or two cups a day, you likely won’t experience any caffeine overdose symptoms.

What are the signs of excessive caffeine?

So, what happens if you go a bit overboard on the coffee and get too much caffeine into your system? According to Healthline, there are a few significant symptoms you should watch out for, like irritability, insomnia, headaches, fever, and dizziness.

Usually, those symptoms can be a pain, but they will likely subside once the caffeine has worked its way out of your system. But you should seek medical attention immediately if you start experiencing confusion, chest pain, irregular heartbeats, or uncontrollable muscle movements. These are all symptoms of a severe caffeine overdose, so don’t ignore the signs.

Are there health benefits to instant coffee over regular coffee?

So, since instant coffee has less caffeine, does that make it better for you? Well, not necessarily. Instant coffee has pretty much all of the same health benefits as your regular cup of coffee, like an increase in energy, a faster metabolism, and more, just to a lesser extent because of its lower caffeine level.

But the real problem with instant coffee is that it contains nearly twice as much acrylamide, a chemical that can be dangerous in high amounts, according to Medical News Today. While the level in instant coffee is still low enough not to be a danger on its own, you’re still drinking chemicals at a higher rate than you would otherwise.

So unless instant coffee is really your only option due to its convenience, you may be better off with a regular brew. If you want to cut back on your consumption of caffeine, you may also prefer decaffeinated coffee over instant coffee when it comes to taste.

Since instant coffee has a lower level of caffeine in general than other forms of coffee, such as traditional ground brews and espresso, it may be a great alternative if you’re looking for a more gentle morning buzz.

Remember, it’s always important to listen to your body. Look for signs that you may be indulging in too much caffeine, and talk to a medical professional if you’re concerned.

The 13 Best Drinks at Dutch Bros You Have To Try