Get our FREE Coffee Lover Newsletter

French Roast: Worth Pulling the Shot?

For something as seemingly simple as bean color, the French Roast is actually a pretty hotly debated topic in the world of coffee. Some delight in the burnt undertones while others completely denounce it. 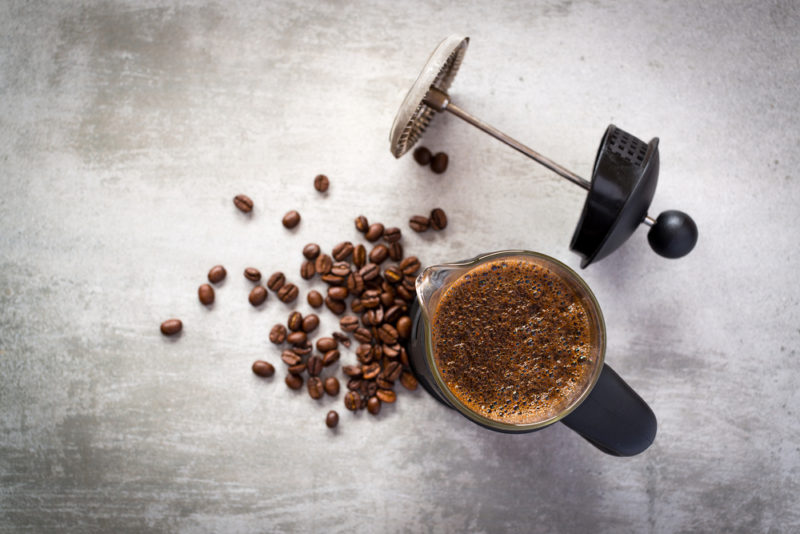 So what’s really going on with this roast? Read on for the scoop on the French Roast from what it tastes like to whether or not you should bother trying it.

What is French Roast?

Well, for one thing, it’s not necessarily from France. French Roast coffee can be from any origin; the name refers to the roast level, which we’ll break down below.

First off, we have to address the way roast labelling works in the coffee industry. For the most part, that labelling is completely unstandardized. Individual companies tend to have a chart or ranking system that their beans are judged by. But other than a few basic rules of thumb, there is no global standardization for roasts.

So, coming back to the French Roast, part of the contention is that different people have different ideas about where EXACTLY a French Roast falls within the stages of roasting.  Those are (simplified) as follows.

*The general consensus for French Roast is that the beans are removed from the roaster sometime near or at the end of the second crack.

For some roasters, the internal temperature for a French Roast begins to push 464 F, which is the absolute highest end of the recommended roast temperatures. Beyond that, beans begin to burn and present a fire hazard.

A French Roast can be identified by its very dark brown (almost black), oily appearance. If using the Agtron Gourmet Scale (the tool used by the Specialty Coffee Association of America), a French Roast will score between 28 and 35. For reference, 25 is the lowest (darkest) score and 95 is the highest (lightest). Most people prefer to stay away from either extreme.

At the beginning of the second crack, a coffee’s roast tends to overpower the flavor of the beans. A French Roast can fall anyway from the middle to end of the second crack. Consequently,  you likely won’t taste any flavors to hint at the origin of beans.

So, your favorite medium roast Costa Rican coffee might have lovely plum, honeys and citrus notes, or a go-to, dark roast Sumatran may by distinctly earthy and herbal. But if both of them were French Roasts, they would probably taste exactly the same.

Compared to Other Roasts

Full City or Full City+ are the roasts that are generally defined as the next definable roast on the lighter side of French roasts. They may have some visible spots of oil on the surface, but are decidedly separate from the very oily surface of a French Roast.

If you are looking for something that’s on the darker side of dark, but don’t want the smokier-to-burnt flavors, this roasts worth looking into.

There is some disagreement on how the “espresso” roast compares to. the French Roast. Some sources claim it is ever-so-slightly lighter than a French Roast.  However, for the most part they are essentially the same roast. Both have very dark brown, shiny surface with burnt undertones.

While most people believe that the French or Espresso roast the darkest one available, that isn’t necessarily true. The Spanish or Italian roast is actually darker, distinguishable by the nearly black color and the slick, oily surface. The flavor of these roasts is flat and charcoal-y. The roasting. process also tends to present a fire hazard to the roasters, so it’s not a very popular offering.

French roasts have very distinct, oily surfaces. As a result, they tend to spoil or and turn stale or rancid much faster than lighter roasts. You can mitigate this issue by only purchasing the amount you’ll need for the week and using a good, air-tight container.

However, many people prefer to buy in bulk, and some companies only offer larger sized bags. Plus, if you aren’t drinking a cup or two a day, having a coffee that spoils in a week and a half is completely infeasible.

While many people seek out specific bean origins for the unique flavors, this practice is impossible with French roasts. The darkness of the roast completely overpowers even some of the more prominent tasting notes in the beans.

As a result, no matter where the beans are from, they’re going to taste almost exactly the same: burnt.

Because the darkness of the roast essentially erases any hints of original flavor, many companies use lower-quality beans for their French Roasts. The aim is to mask the poor-quality coffee flavor with the overpowering roasted flavor.

The result is pretty abhorrent coffee. You can somewhat avoid this issue by buying from brands you trust, but there’s really no definitive way to vet exactly what’s going into the bag.

Because roasters can use cheap,  low-quality beans for French roasts, they are often unethically sourced. In cases like this, farmers are exploited for the sake profit and are often forced into cheap, environmentally unsustainable practices.

To avoid this in both French roasts and coffee in general, look for a Fair Trade label or research the company to see how transparent they are about their sourcing and sustainability.

As with some other dark roasts, French roast beans have a tendency to taste bitter.  This is due to the carbonization of fibers within the beans. For some dark roasts, this makes for a nice smoky/charcoal flavor that people enjoy. But for French roasts, it often makes for an overpowering bitterness and burnt undertones.

For French Roasts that are on the light side, using a coarser grind and a French Press can help bring out the sweeter flavors. However, for French roasts that push the limit on the roast scale, this likely won’t help much.

Also, you can try adding salt to your grounds to mitigate this issue and perhaps address the freshness problems (as salt may remove some of the moisture).

This may be a lesser concern for those of you using other brewing methods, but oilier beans do mean more frequent cleaning of grinder and machines. This is especially an issue if you are using these beans in an espresso machine, particularly if the grinder is built-in. The oils tend to clog the machine,  which if let unattended, could eventually damage the machine.

In our opinion, coffee has much more to offer in the flavor department than the ashen, burnt profile most frequently presented by a French Roast. But if you’re set on buying one, we recommend going for one that leans lighter, for the sake of storage and the potential to get some sweetness out of a French pressed brew.

Furthermore, if you’re simply interested in exploring darker roasts, look towards a Full City or Vienna Roast from a reputable company.  These roasts can be heavy and rich with smokier rather than charred flavors.

So you've figured out how to grind and brew on your own, but have you considered roasting your own beans to get the perfect blend? Read this article on the best popcorn popper for roasting coffee to find out how to do it.

You have the right grinder, a great maker, and your favorite mug. Now take the next step to true coffee connoisseur-dom. Get a coffee roaster, and roast your own beans at home.

French Press vs. Drip Coffee – Which Brewing Method Is Best For You?

We compare French press vs drip coffee and help you decide which one is best in terms of flavor, time to brew, how much you need and much more. Let's get started:

How To Prime A Keurig & Keep Your Sanity

All you want is a cup of coffee, and your Keurig has an error message that says Prime. Before you throw it out the window, here's a step by step guide to priming your Keurig machine.

How To Make Chicory Coffee – The Hard Way & The Easy Way

The Definitive Guide to Roasting Coffee at Home

Using our definitive guide to roasting coffee at home, you can learn how to create the perfect cup of coffee yourself from start to finish.