With the average American consuming around 12 pounds of chocolate per year and a little more than three cups of coffee per day, the chances are high that you share my love for chocolate and coffee drinks.

Thanks to at-home coffee grinders and coffee shops, most coffee drinkers know that a batch of coffee comes from roasted coffee beans. But have you ever thought about where your chocolate comes from?

Here’s a hint—it comes from a bean, too!

Read on to learn about the similarities and differences in turning coffee and cocoa beans into some of the world’s most beloved beverages and foods. 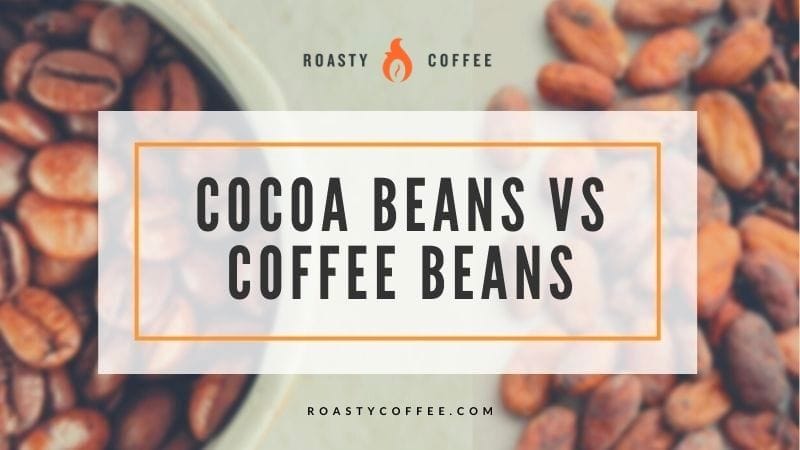 If you set a coffee bean and a cocoa bean on a table, most people won’t have trouble recognizing the coffee bean.

However, unlike coffee beans that we can whip into grounds with our coffee makers, we almost always see cocoa “beans” after they’re already in a chocolate bar or powdered state.

So, the next time someone asks you the difference between coffee beans and cocoa, below are some stand-out features that will make you sound like a pro.

Appearance is one of many areas in which cocoa and coffee beans differ. So, let’s explore where else they diverge. I’ll also highlight traits that coffee and cocoa beans have in common.

It’s All in the Flavor

You don’t need us to tell you that coffee and chocolate taste different, but what exactly are the flavors that separate these two bean-derived foods?

When it comes to cocoa, you can expect a jarringly bitter taste. Cocoa beans only have trace amounts of natural sugar, so the sugar added during the manufacturing stage gives chocolate its sweetness.

On the other hand, coffee beans tend to have a more earthy undertone. Of course, there are several varieties of bitter coffee beans.

However, it’s usually the roasting process that determines the bitterness of coffee beans and not the green bean itself.

Depending on their growing conditions, coffee beans also offer more variety in their taste. Some coffee beans even have a slight chocolate flavor.

In fact, the climate has such a significant impact on coffee bean flavor that scientists predict that we’ll see a decline in coffee flavor as global warming continues.

If you’re on a diet, it may come as no surprise to you that coffee has fewer calories than chocolate. However, you might not know this—eating a dark chocolate bar made 100% from cacao (in other words, no added milk or sugar) can still be a fattening food.

According to the U.S. Department of Agriculture, 100 grams of pure, dry cocoa powder contains the following:

Cocoa powder is also rich in potassium, iron, calcium, and vitamin B-6, along with many other vitamins and minerals.

So, while coffee beans are no doubt better for your waistline than cocoa, or cacao beans, we’re not saying that you shouldn’t eat chocolate.

On the contrary, a cup of coffee will give you trace amounts of potassium, iron, and calcium, whereas dark chocolate offers more of these nutrients.

I think I speak for all of us when I say that scientists and dieticians have given us the runaround over the years about whether coffee and chocolate are healthy for us.

As you now know, cocoa beans naturally have more nutrition than coffee beans, although they also contain more fat and calories.

However, most current research suggests that when consumed in moderation, the food and drinks we make from coffee and cocoa beans are healthy for us.

According to Johns Hopkins Medicine, eating dark chocolate with at least a 70% cocoa content gives your body a boost of antioxidants that can improve your heart’s health, prevent diabetes, give you a stronger memory, and increase your athletic performance.

As it turns out, coffee beans offer a noteworthy dose of antioxidants as well. Johns Hopkins Medicine also found that drinking three to five cups of coffee per day is safe for most adults.

In addition, drinking coffee may help increase your lifespan, improve how your body processes glucose, and reduce the chances of Parkinson’s disease.

When it comes to caffeine, coffee and cocoa beans have two primary things in common—both contain caffeine, and the amount of caffeine they contain depends on how you prepare them.

Don’t believe me? Take a look at the caffeine content below when using coffee beans to make espresso versus instant coffee:

Now, compare that with using cocoa beans to make chocolate:

According to the Mayo Clinic, 400 milligrams of caffeine is safe for most adults to consume daily.

It’s easier to consume too much caffeine with coffee than chocolate. But in either case, below are the symptoms you may experience from taking in excessive amounts of caffeine:

From Bean to Powder

Both cocoa beans and green coffee beans are bitter to eat plain, which is why we ground them into a powder so that we can mix in sugar, milk, and other flavors.

Cocoa powder is a soft, fine product with a consistency similar to flour.

On the other hand, coffee bean “powder” is the grounds you use to make coffee. These grounds typically have a thicker texture than cocoa powder.

However, the exception is espresso grounds, as they’re a more finely ground version of coffee beans.

The Importance of Roasting

Coffee and cocoa beans rely on post-harvest processing for flavor development and to make them usable for human consumption.

Roasting coffee beans helps remove the moisture content from the bean and draws out the taste of coffee we all know and love.

There are several roasting methods, ranging from light to dark, with the lighter roasts having a bit more caffeine than darker roasts (I know, it’s against conventional thinking!).

Lighter coffee bean roasts have the mildest flavor since they don’t undergo enough heat to break down their oils. Medium roasts have a slightly more robust coffee flavor, but they still don’t have an oily texture.

Once you get into dark roasts, you’ll encounter a more potent, bitter taste. They also have an oily surface.

If you’ve never thought about the type of cocoa bean roast used to make your chocolate, I understand—it’s not jargon that’s wired into our brains like coffee roasts are.

FAQs About Cocoa and Coffee Beans

Have I piqued your curiosity about the differences between cocoa and coffee beans? Read on to learn about answers to people’s common questions about them.

What Is the Farming Process Like for Cocoa and Coffee Beans?

Cacao and coffee plants grow in fertile soil in a similar climate since they thrive in areas around the equator. However, coffee prefers a higher altitude and cooler temperatures than the cacao plant. Furthermore, cocoa plants prefer more sun and moisture than coffee bushes.

Do Cocoa and Coffee Beans Come from the Same Family?

Not really. However, they’re both in the flowering plant category, which botanists call eudicot. Since over half of the world’s plants are eudicots, that’s not saying much about the relationship between coffee and cocoa beans!

Is It Possible to Brew Cocoa As You Do with Coffee?

Yes, you can. Alternatively, you can mix the cocoa powder directly into a hot cup of milk or water. Cocoa powder doesn’t have coarse grounds like coffee, so it dissolves completely.

No, they don’t. Cocoa beans grow in large pods that hang from the branches of a tree. In contrast, coffee beans grow in individual berries on a bush. Both plants need a few years to grow before they begin producing fruit.

So, there you have it—cocoa and coffee beans have vastly different tastes, but they share a similar process to turn them into the food and beverage we know and love.

If you’re interested in learning more about how coffee beans turn into your cup of joe, my post on how coffee is made will give you an in-depth understanding of it.