Wedged cozily between Kenya and The Democratic Republic of the Congo, Uganda is a landlocked East-African country that until 1962 was ruled by the United Kingdom.

Just like other countries on the African continent such as Zimbabwe and Ghana, this country’s reputation as a home of fantastic coffee is growing rapidly. Its climate is glorious, its mountains majestic and its farmers dedicated to producing top-quality coffee beans.

Today we’ll take a look into this exciting world of coffee in Uganda.

Although Uganda’s climate and fertile soil has allowed the production of good-quality coffee throughout the years, internal conflict and the weakness of Uganda’s currency has prevented it from seeing much success in the wider-coffee world.

Between 1976-1977 there was a boom for Ugandan coffee. This could have been promising for the country, but instead over 30% (50,000 metric tonnes) of the coffee was smuggled over the borders into Kenya.

Not long after in 1987 producers were hit hard when Uganda coffee prices fell drastically. After years of instability, once Uganda liberalized its coffee sector in 1991 prices steadily began increasing again, which meant that coffee production began being a profitable business again for farmers.

Ugandan coffee has been able to persevere through all of the country’s problems because the country can boast incredibly rich and fertile soils where their coffee cherries thrive and quality coffee is grown.

At a Glance: Ugandan Coffee

Uganda’s climate is ideal for growing coffee. Not only does it have incredible volcanoes to the East – like Mount Elgon and Muhavura – but it also had lots of rainfall. The nutrient-dense volcanic ash, paired with glorious sun and rain is a combination that makes Uganda’s producing regions difficult to match.

There are five, primary regions where coffee from Uganda is grown, with some of them bordering other countries:

The most widely grown bean in Uganda is Robusta, which 80% of all coffee grown in the country consists of. Uganda’s Arabica beans count for the remaining 20%, the varietals being Typica, Kent, SL 14, and SL 28.

Also, a noteworthy Arabica cultivar Bugisu is cultivated on the Western slopes of Mount Elgon, named after the region it’s grown in. It’s also grown at 1,300 to 2,600 meters. While its Robusta is topnotch and its Arabica great, Bugisu is the coffee Uganda is standing out with.

The increasing recognition of this African coffee is down to the training provided to local, smallholder Ugandan farmers to maintain the great quality of the coffee.

These bonuses are offered as either cash or as fertilizer, which if put back into the production of coffee will see an even bigger increase in amount and quality. This then provides the local farmers with a much more secure form of income.

Companies such as Great Lakes Coffee, an Uganda-based green coffee sourcing, milling and exporting team are helping locals by building community wet mills and creating access to finance. They are providing important training to farmers and also paying for the certifications needed by smallholder farmer groups. Ah, the power of green coffee. 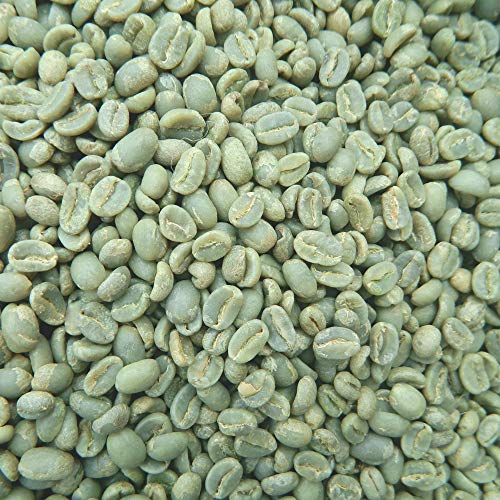 Ugandan coffee is both wet and dry processed. Each method extracts the delicious Ugandan coffee bean from the pulp, film, and parchment that covers it, but each method does it slightly differently:

Both methods of processing also include hulling after they have been dried. This is when the beans are placed in machines (hullers) that rotate at 450-800 rpm. If the coffee beans have been wet-processed, then this process removes the parchment that covers them.

If they have been dry-processed, the husk must be removed from the coffee beans.

As of 2017, there were 250 active hulleries in Uganda. After the beans have been hulled, they are then sorted by size using perforated sieves or a catador (a pneumatic sorting-table).

As you can tell, a lot of attention and work goes into harvesting and processing Uganda coffee. Most of the coffee grown in Uganda is Robusta coffee, which is primarily sold for commercial interests.

But… Bugisu is not Robusta. In fact, it is the most renowned of the Ugandan Arabica varietals and it has a taste that really makes it stand out from the crowd:

That taste sounds quite festive, doesn’t it? We know what we’re asking for Christmas…

It’s Time For Some Suggestions 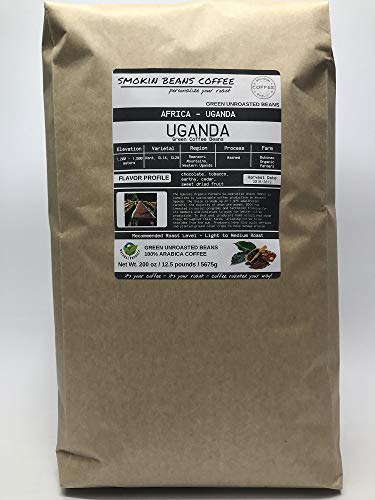 This bag of organic, unroasted Arabica coffee is sold in partnership with The Bukonzo Organic Farmers Co-operative Union (BOCU) which is committed to sustainable coffee production in Western Uganda.

It is grown on the Rwenzori Mountains at an altitude of 1200-1500 meters and is dry processed.

The taste notes are earthy, with hints of tobacco, cedar, and sweet dried fruit. How delicious.

RhoadsRoast Coffee’s AA whole bean coffee is certified by the Rain Forrest Alliance and is wet-processed. It is grown primarily in the West Nile sub-region of Nebbi. However, this arabica coffee’s other producing regions are the Rwenzori Mountains and by Mount Elgon.

This coffee has a full body and medium acidity, with a rich aroma and very unique, wine-like characteristics. 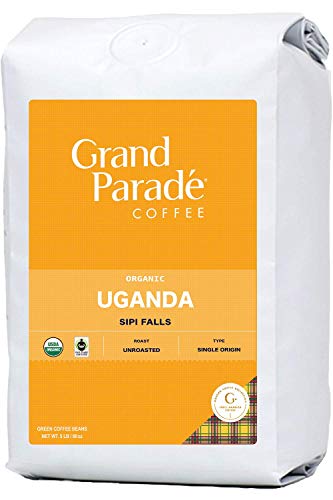 Grande Paradé Coffee’s single-origin Arabica bean is certified Fair Trade. It is produced by small-holder farmers in Sipi Falls, one of the most revered coffee regions in Uganda.

Grande Paradé Coffee is hand-sorted to remove any defective beans and is strictly grown at an altitude of over 1350 meters to ensure quality.

This arabica has a great, varied flavor profile with notes of orange, blackberry jam, caramel, and chocolate. Yum!

Grande Paradé Coffee comes unroasted and is recommended for a medium roast.

Adding Ugandan Coffee To The (Wish)List

Whether it’s the country’s more widely-accessible Robusta coffee, its top-quality Arabica, or incredibly unique Bugisu bean from the slopes of Mount Elgon, we think it’s pretty hard to go wrong with what Uganda has to offer.

Don’t sleep on such a great quality product from a country full of dedicated, passionate farmers and companies working together to provide excellent beans for our drinking pleasure.

Why not start tomorrow off with an Uganda coffee? Brew a cup or two of Bugisu, enjoy those chocolate notes and we’ll do the same. It sounds too good to resist, doesn’t it?

The Ninja Specialty Coffee Maker: All You Need In a Coffee Machine

The Best Coffee Grinder for Pour Over Coffee