Not a fan of hot coffee? Cool it down some! If you’re a coffee-lover, you’re probably familiar with iced coffee and cold brew coffee. But what are they exactly? Aren’t they just the same thing?

The simple and short answer is no, they aren’t the same thing. But both are savory coffee beverages to sip on depending on how you enjoy your cold coffee.

Read on to find out the differences between these two delicious coffees! 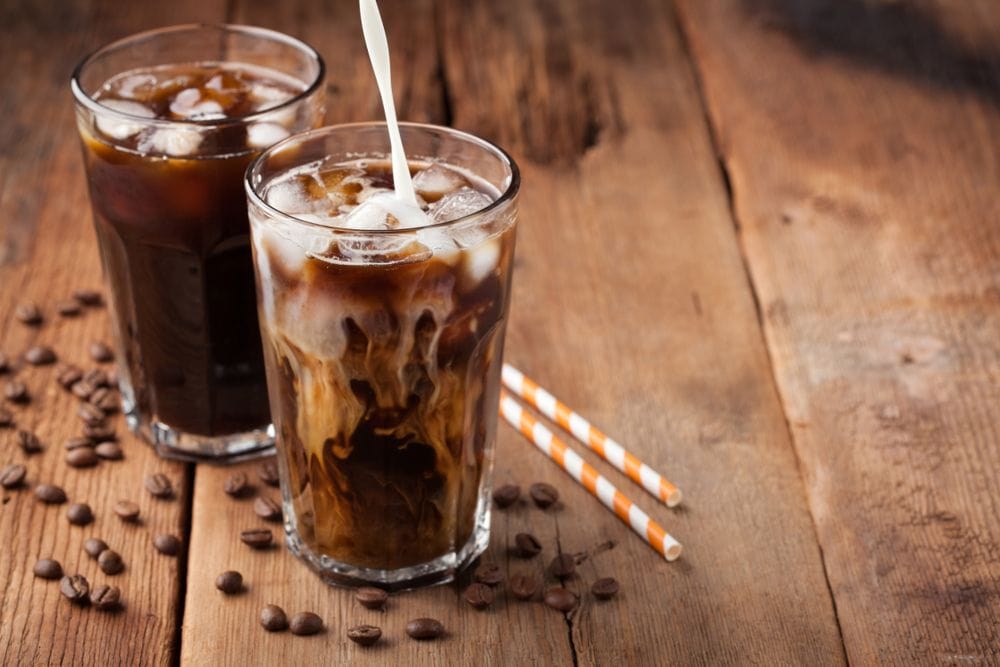 What is Iced Coffee?

Iced coffee is enjoyed by many because it’s a simple and quick way to satisfy your craving for a cold cup of joe. It tends to be full-bodied, higher in acidity, and it is often more susceptible to being diluted easier because of the rate of the melting ice. However, most iced coffee fans enjoy may enjoy or tolerate the dilution of the coffee in order to enjoy quickly enjoy a sip of chilled coffee.

There is some equipment that is designed specifically for brewing iced coffee, but this is a less common method that people consider when discussing iced coffee.

What is Cold Brew Coffee?

Unlike iced coffee, cold brew is named after the method of brewing instead of the temperature of the coffee itself. It’s also NEVER exposed to heat, and it primarily relies on room-temperature and cooler temperatures throughout the brewing process. Many cold-coffee drinkers enjoy cold brew because it can be more concentrated in flavor as well as caffeine content. In addition to this, it’s also lighter in acidity and easier to digest for those who may have sensitive stomachs.

Now, let’s get into the nitty-gritty. Though they are similar because they both depend on ice and cooler temperatures, there are several differences between them. Knowing these differences can help you determine which drink you’ll be ordering on your next visit to the coffee shop.

First of all, the flavor of these two coffees is the easiest factor to notice. Iced coffee tends to be less savory and lighter not only from the dilution from melting ice but also from the extraction of flavor during the hot brewing process. The hot brewing method can sometimes result in a duller, less flavorful cup of iced coffee. When the coffee is brewed with hot water, the warmer temperature will extract the inner notes of flavor in the coffee at a faster rate, and the cooling process that happens after this extraction can solidify the somewhat over-extracted, muted flavors.

However, cold brew coffee has a much different story. Since the brewing method for cold brew requires the grounds to be steeped in water for several hours, the flavors can be much stronger and much more robust. This is why cold brew coffee is also often referred to as “cold brew concentrate” because when it comes to flavor, it packs way more of a punch. And of course, you can adjust how strong the flavor is depending on what coffee: water ratio you use.

When comparing iced coffee and cold brew, size DOES matter. Grind size is important because it impacts how easily the grounds will filter and absorb water as the brewing process is taking place. Since iced coffee is originally brewed through a hot brewing process such as a drip-coffee machine, French press, or through the pour-over method, the grind sizes will range anywhere from medium to coarse, depending on which method you utilize. 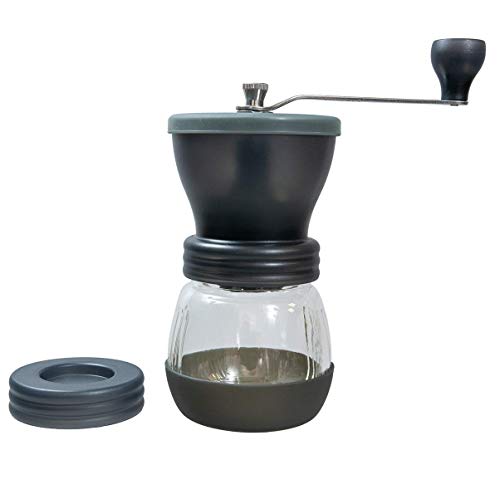 Hario Ceramic Coffee Mill - "Skerton"
Check Price on Amazon If you click this link and make a purchase, we earn a commission at no additional cost to you. Last Update: 2022-01-17

With cold brewing, it’s another story. Since you’re steeping your coffee grounds for a long amount of time, it’s important to use a coarser grind, that way the water can easily filter through the grounds without over extracting them. Over-extraction can easily occur when brewing with the wrong grind size because the size of the grounds will determine how effectively the water is able to filter through the grounds. Thankfully, you can avoid the bitter taste that comes with over-extraction because of the coarser grind.

Baratza Encore Conical Burr Coffee Grinder (Black)
Check Price on Amazon If you click this link and make a purchase, we earn a commission at no additional cost to you. Last Update: 2022-01-17

Brewing methods are arguably the most distinctive difference between iced coffee and cold brew. Iced coffee is always brewed with hot water, and hot coffee can be brewed in a multitude of ways. Making iced coffee is usually very straightforward and simple since you’ll just brew your hot coffee like normal and then pour it over ice.

Making cold brew is different than other forms of brewing because instead of relying on temperature, it relies on time. Colder temperatures can slow all processes, especially the extraction of flavors in coffee grounds. Since the process is slower, all of the flavor in the coffee can be extracted thoroughly without over-extracting. On average, the amount of time it takes to make a batch of cold brew is anywhere from 6-12 hours. So if you’ve got several hours on your hands, as well as a cold brew coffee maker, you can easily prepare a batch that can last you for several days. 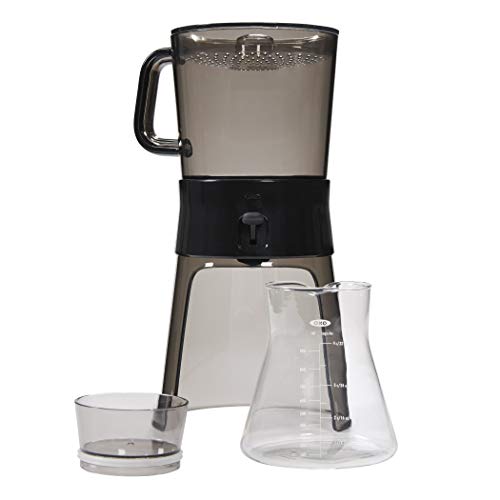 OXO Good Grips 32 Ounce Cold Brew Coffee Maker
Check Price on Amazon If you click this link and make a purchase, we earn a commission at no additional cost to you. Last Update: 2022-01-18

Though iced coffee is great because it’s a fast, convenient way to get a sip of cold coffee, it’s definitely not meant to last for a long time. Hot coffee usually begins to go stale once it starts cooling, which is normally around 30 minutes after brewing. Once it reaches room temperature, after about 3-4 hours the remaining oils in the coffee will alter the flavor of the coffee, giving it a sour, overall crappy taste. Likewise, iced coffee has an even shorter expiration. Since you’ll be pouring it over ice, not only are you watering down your coffee but you’re also progressing the expiration process.

On the other hand, cold brew is meant to last you for the long haul. Depending on how much you make, how you store it, and how you portion it, cold brew can last up to two weeks. The expiration date can also be influenced based on how concentrated your cold brew is. If you have to dilute it with water every time you make a cup, it will last you longer because you’re only using a little at a time. For example, most cold brew coffee will begin to lose its flavor after about a week, but if you make a more concentrated amount of cold brew, all you’ll have to do is add water to it to continue to stretch out your supply and make it last longer.

Iced black coffee can be more acidic than cold brew, mainly because it isn’t brewed as delicately as cold brew coffee is. Since it isn’t steeped or brewed for the same length of time, it provides a decent amount of caffeine, though not as much as cold brew. Furthermore, once the hot coffee is poured over ice and diluted, it will be easier for those who are sensitive to caffeine to drink, even though it may be a little rougher on the stomach.

When it comes to cold brew, it’s the opposite. For those who may have sensitive digestive tracts, cold brew may be a better option because it contains about half of the acidity of iced coffee. This makes it easier on the stomach, though the more concentrated amount of caffeine can pack a punch for those who are sensitive to it. However, the amount of caffeine in cold brew can easily be altered by adjusting your coffee/water ratio. The less coffee and more water, the less caffeine, and vice versa.

Still have some questions? We have the answers. Here are a few outlying questions that you may still be asking yourself.

Nope. We already know that iced coffee is hot brewed coffee that’s just been poured over ice, but a latte is completely different in ingredients and structure. Instead of hot black coffee, lattes are made with espresso, cold milk, and ice. Though the espresso is more concentrated, the cold milk and ice will dilute it, making it more of a thicker, creamer coffee beverage. Iced coffee, since the main two ingredients are coffee and water, is much thinner and stronger in coffee flavor.

What About Nitro Coffee?

Whether or not you’ve heard of it before, you’ll eventually encounter nitro brew coffee if you’ve been enjoying cold brew coffee for a while. Infused with nitrogen, nitro coffee is delicious on its own and doesn’t need the addition of extra flavors or sweeteners. The nitrogen gives it a rich, creamy, strong flavor, making it perfect to sip on its own, or you can add a splash of milk if you need to cut the flavor a little bit. 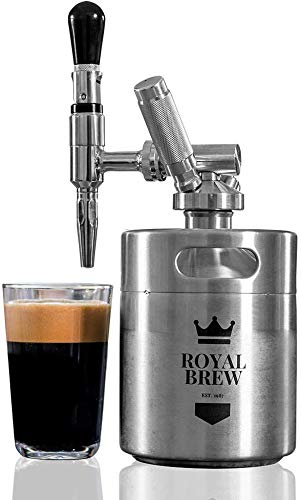 Royal Brew Nitro Cold Brew Coffee Maker Home Keg Kit System
Check Price on Amazon If you click this link and make a purchase, we earn a commission at no additional cost to you. Last Update: 2022-01-18

In addition to Nitro Coffee, a more unique, lesser-known cold brew coffee is New Orleans Cold Brew Coffee. For this cold brew coffee, the brewing method is the same, but it does add chicory to give it a sweeter, stronger flavor.

Adding chicory to coffee is originally a French practice. Developed during the French Revolution, chicory was added to coffee when coffee was scarce after individuals discovered that it added extra flavor and body to the coffee. Because New Orleans was originally a French territory, most of the French culture remains there today, including the practice of adding chicory to coffee to give it an extra “kick.”

Furthermore, it’s also traditional to add milk/creamer, or sugar to your finished cold brew to add a creamy, thick, savory flavor. Besides, nothing’s better than a creamy cold brew when enjoying some delicious beignets for breakfast!

The more accurate question to ask yourself when comparing iced coffee and cold brew isn’t “which one is better?” but “which one is better for me?” Though they both are similar as far as temperature and structure are concerned, there are many key differences in flavor, caffeine content, brewing methods, etc. that will help you determine which one you may enjoy the most.

If you’re looking for something simple, easy, and efficient, iced coffee may just be the way to go. Especially if you have a drip coffee machine, French press, or pour-over equipment at home, iced coffee may just be simpler for you to make. However, if you’re crazy about your cold coffee and you have time on your hands to brew a batch of it, then cold brew may just be the way to go. The choice is up to you! Have fun experimenting between the two, and as always:

Oily Film On Coffee: Has Your Coffee Gone Bad On You?