Unfortunately, Starbucks’ Toasted Coconut Cold Brew was only available for a limited time, so you can’t purchase the coffeehouse version anymore. However, with cold brew, coconut syrup, and coffee creamer, you can make a copycat beverage that’s just as good!

Ah, the taste and smell of coconut plus the refreshing, caffeinated kick of cold brew — two of the best things about summer, in our opinion.

And they only get better when you combine them, like in this coconut cold brew recipe!

This chilled treat offers a welcome respite from hot coffee drinks in the warm summer months, and since it’s coconut-flavored coffee, this cold brew makes you feel as if you’re on a tropical vacation, even if you’re sipping it at work. It’s pretty much the perfect summer drink.

Read on to find out how to make it, plus learn a little more about our current favorite coffee beans for cold brew! 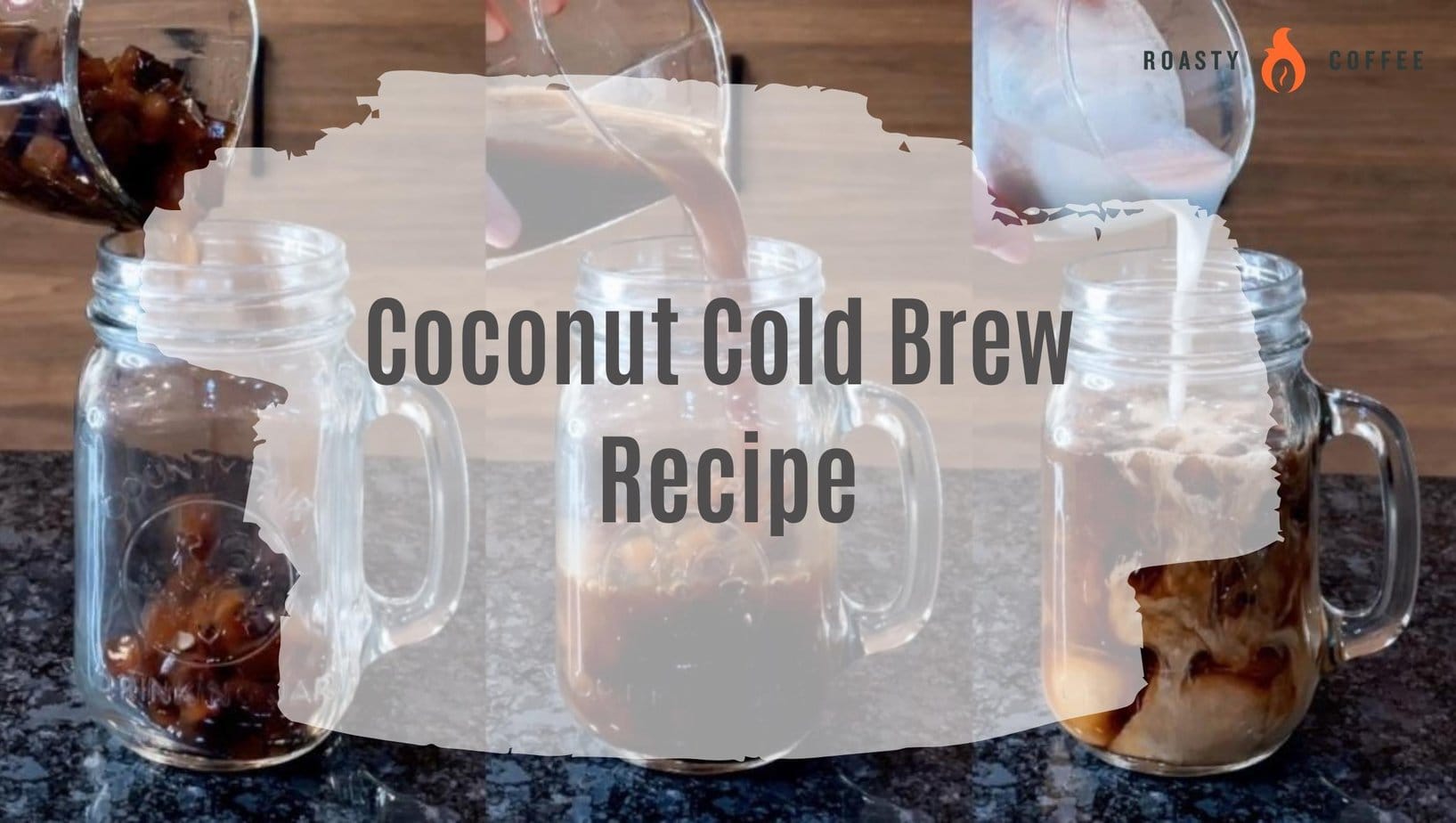 You can use whatever beans you like to make a batch of cold brew coffee concentrate, but if you’re looking for suggestions, we highly recommend Atlas Coffee Club.

We received some of the coffee subscription company’s cold brew beans to try (and some complimentary, super-convenient coffee filter bags for easy brewing), and we have to say we are pretty big fans.

You can read more about all of Atlas’ offerings in our detailed brand review.

Whatever you use, whether manufactured by Atlas or not, we recommend purchasing whole coffee beans and grinding them at home just before trying this delicious coffee recipe.

Starbucks Coffee debuted its Toasted Coconut Cold Brew in April 2017. The inspiration for this drink — a combination of Starbucks’ signature Nariño 70 cold brew, toasted coconut-flavored simple syrup, and coconut milk — came from jalao, a candy made of honey and coconut traditionally enjoyed in the Dominican Republic.

Unfortunately, Starbucks only sold this cup of cold brew coffee with coconut through the spring of that year, so you can no longer order the beverage from your local location.

However, you can round up a couple of ingredients and make your own version at home! 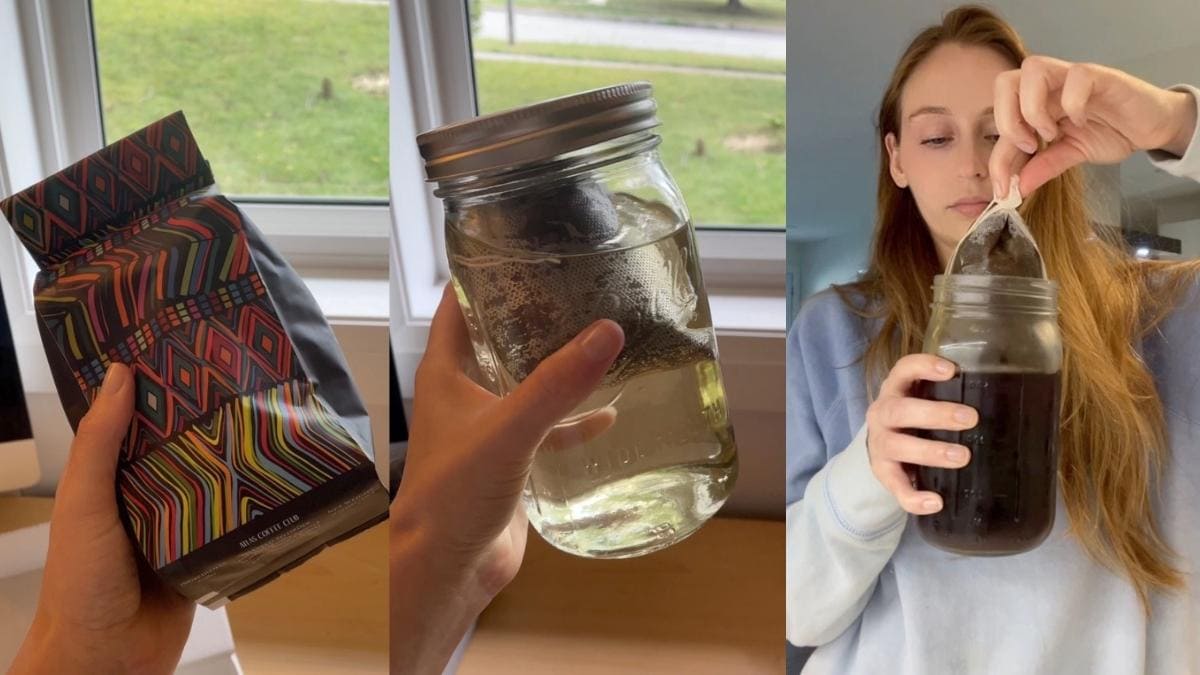 Before doing anything else, pull out your cold brew coffee maker, your favorite blend of coffee beans (coarsely ground), and some room temperature or cold water; it’s time to make some fresh cold brew concentrate.

Cold brewing isn’t a quick process — it takes at least 12 hours to get cold brew coffee ready to filter and drink — so be sure to give yourself plenty of time to brew before making this coconut-flavored cold-brewed coffee.

As mentioned earlier, we used Atlas Coffee beans to make our joe, but you can brew whatever coffee grounds you want. 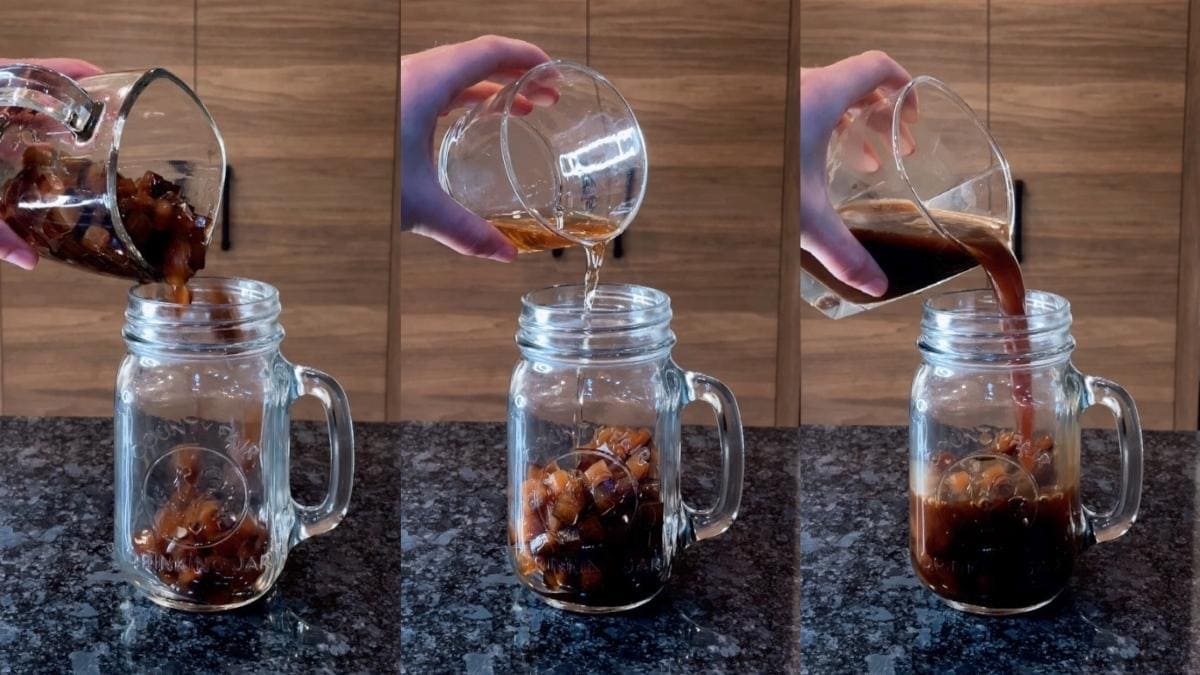 After you filter the coarse coffee grounds out of your java with a fine-mesh sieve or piece of cheesecloth, your cold brew coffee is ready to use.

Pour toasted coconut syrup and cold brew into an ice-filled glass. You can use any old drinking glass, but if your goal is to make an aesthetically pleasing, highly Instagrammable coffee drink, consider pouring the ice into a mason jar instead.

And because melted ice can quickly turn a refreshing drink into a watery mess, we recommend using coffee ice cubes instead; when they melt, they unleash more flavor into your cup. Who would say no to that?

In a frothing pitcher (or another glass, if you don’t have one of these handy), combine a splash of toasted coconut syrup with milk or creamer and use your frothing tool to create a layer of foamy, bubbly milk.

You can use your standard creamer or milk of choice, but we think coconut milk or coconut milk-based creamer makes an exceptional addition to this iced coffee drink. 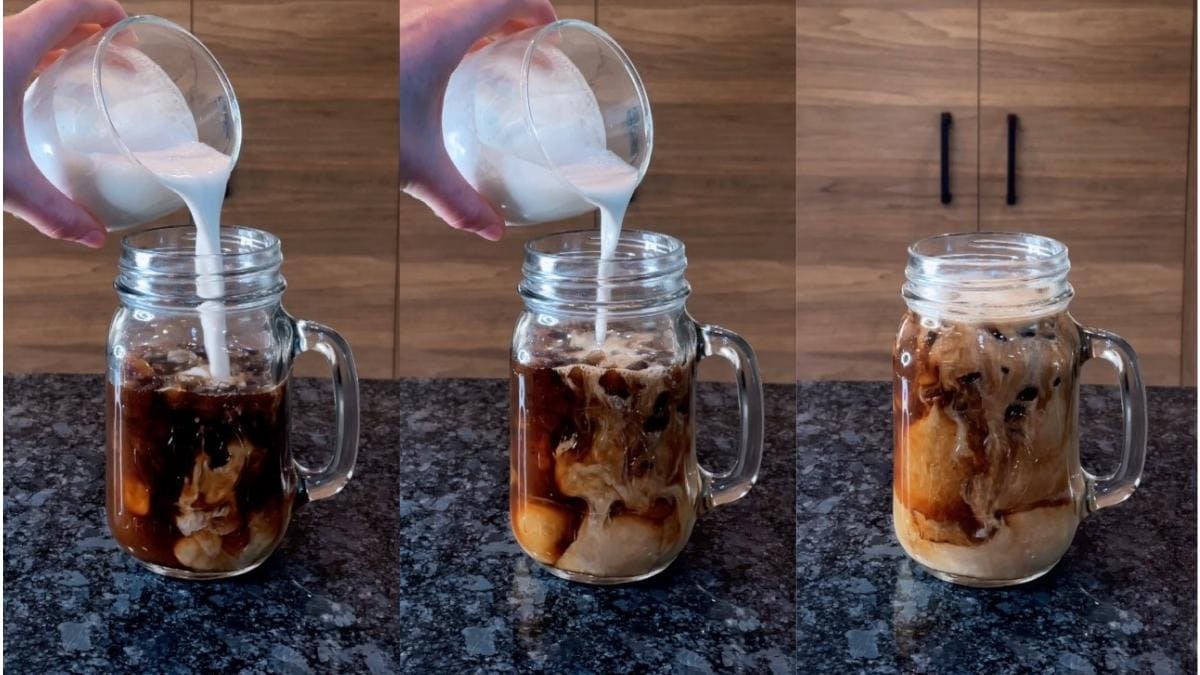 Pour the frothed milk into the glass with ice, cold brew, and coconut coffee syrup, and savor every sip of this delicious cup of coffee.

Devoted fans of the fruit may find themselves craving an extra hint of coconut, and for those folks, it may be a good idea to make java with coconut water instead of regular H2O.

The best way to do this is to scoop coffee grounds into coconut water and let the liquid and coffee mixture steep in the cold brew maker for 12 to 24 hours, just as you would if you were using regular water.

Then, use a mesh strainer to filter out the coffee particles, and there you have it: coconut water cold brew concentrate.

Besides creating a more flavorful base for a delicious coffee drink, coconut water:

After a particularly long workout, you’ve got to replenish the electrolytes you sweated out, and coconut water is an effective way to do so.

Coconut water contains potassium, sodium, and magnesium but none of the added sugars or dyes that leading sports drinks have.

Staying hydrated is the best way to prevent kidney stones, and while sipping plain water is your best bet for a healthy urinary system, coconut water might be helpful, too.

When tested among eight people in 2018, coconut water increased potassium, citrate, and chloride removal in urine, proving it useful for flushing out the system.

That doesn’t mean you can ditch your six-step skincare routine, slather coconut water all over your face, and expect results, but mixing it with other ingredients can help speed up the acne-clearing process.

Contrary to what you might think, coconut water and coconut milk are not the same.

You can drink coconut water straight from a young green coconut, and the sweet, translucent fluid is also called liquid endosperm — but that name’s a mouthful, so you’ve probably only heard it called coconut water.

As young coconuts mature, the liquid endosperm starts hardening, forming solid endosperm, or coconut meat. You might still find a little coconut milk in older fruits, but to get a larger serving of the refreshing beverage, you’ll have to crack open one that’s younger.

On the other hand, coconut milk is a processed coconut byproduct created by soaking shredded coconut flesh in hot water until coconut cream rises to the top. Skim off the cream, strain the remaining liquid to get rid of any pulp, and what is leftover is called coconut milk.

In recent years, coconut milk has become all the rage at coffee shops since it’s a delightful non-dairy milk alternative in cups of coffee. It’s also a key ingredient in many Southeast Asian dishes, especially curries and soups.

You’d be surprised how quickly a good cup of coffee can shift your mood; toasted coconut cold brew is no exception.

The next time there’s a heat wave, and you want to cool down with a nice glass of chilled joe, give this recipe a try.

Or maybe you’re one of the many who crave their coffee chilled all the time, even if it’s a cold winter morning. That’s OK; this drink is for you, too.

No matter what the weather outside is like, this beverage’s coconut flavors can lead you and your taste buds on a tropical adventure.

How To Make Cold Brew Coffee: A Comprehensive Guide