Coffee giants Starbucks Coffee Company and Dunkin’ Donuts are rivals in every sense of the word. They go head-to-head battling value versus variety, Coolatta versus Frappacinno, East versus West, grab-and-go versus sit-and-lounge.

It’s not always been like this, though. The coffee chains once peacefully co-existed, serving different products to different types of customers. But in 2000, Dunkin’ Donuts put a big bet on coffee to help increase sales, and thus, sparked a war. Do you remember those Dunkin’ Fritalian commercials in 2006? Dunkin’ came out swinging!

But what about you and me? How does this corporate rivalry affect us as coffee drinkers? Let’s dig into how Dunkin’ and Starbucks differ for in-store and at-home coffee. Perhaps then we can finally declare a victor in this epic battle.

Starbucks and Dunkin’ Donuts (Dunkin’ as they now prefer to be known) are two of the biggest coffee chains in the U.S. These old-timers have been pouring java for decades — Starbucks since 1971 and Dunkin’ since 1950 — but they took very different approaches to serving customers.

Starbucks went down the premium route, creating a cool and comfortable coffee house vibe where customers can hang out and pick from a vast menu. Dunkin’ picked the value and convenience route, creating more of a fast-food type of environment where the customer can easily grab and go.

Here are some impressive facts to whip out on your next coffee date. They’re guaranteed to secure you a second one (though we cannot be held responsible if your date is unimpressed).

The physical east and west divide created by these two brands is obvious. If you’re a Bay Stater, do you even dare to walk into a Starbucks? Probably not, as Dunkin’ Donuts locations outnumber Starbucks cafés 10-1. And if you live in Seattle, you’ll not even have the option to visit Dunkin’, given that there are no stores in the state.

But for the rare few of us who have a Starbucks location right down the road from a Dunkin’ and the luxury to choose between the two, here’s how the giants compare by in-house cup size, price, and variety.

If caffeine is your thing, Starbucks is your best bet. A Venti-sized dark roast brew has 340 milligrams of caffeine while the same-sized large brewed coffee from Dunkin’ only has 300 milligrams.

But hold up! Did you know in 2020, Dunkin’ added “Extra Charged Coffee” to the menu? You can add 20 percent more caffeine with this shot. It comes from green coffee extract, which is intended to add the extra boost of energy without changing the flavor.

If you’re anything like us, you want to get the most bang for your buck! But how much you’ll spend at either store depends on where you live. While locations charge differently, however, it’s well-known that Dunkin’ tends to boast a cheaper overall coffee house dining experience.

We did a price comparison of both a Dunkin’ Donuts large drink and a Starbucks Venti, as both sizes hold 20 ounces of java.

Sure, that’s not a startling difference, but if you, like many a Roasty reader (and the Roasty writers, too) have a regular weekday takeaway coffee habit, those couple of dollars adds up. In a year, one could save $100 (or feed the habit by buying an additional 50 cups of coffee…yeah, that one sounds better) just by visiting Dunkin’!

You’ll find about 20 different beverage items listed on a Dunkin’ menu board and 34 at Starbucks.

Dunkin’ has the usual culprits — hot and iced coffees, lattes, and teas — plus their specialized drinks, including the Dunkaccino, a mix of coffee and chocolate topped with whipped cream, and the Coolatta, a fruity slushie drink that comes in a variety of colors.

Starbucks, on the other hand, has the typical array of hot and iced coffees, lattes, and teas, too, however, the company also boasts its signature Frappuccino, a Starbucks staple made by mixing coffee, ice, and flavored syrups and creams in a blender, and Refreshers, a mixture of fruit juice, ice, and green coffee that’s perfect for a light caffeine touch.

Fun fact: Dunkin’ didn’t introduce espresso-based beverages to its menu until 2003, whereas Starbucks has been worshipping at the altar of espresso since 1985.

Both Dunkin’ and Starbucks offer a line of at-home coffee products so you can recreate your favorite menu item in your kitchen. Here’s how they measure up by variety, price, and taste.

Starbucks, however, has a whopping 96 different options. Take your pick:

Since both Starbucks and Dunkin’ Donuts have a wide range of at-home coffee options, as you can see above, it’s pretty much impossible for us to compare every bag of beans each brand sells. We can, however, take three of the brands’ best beans — ones loyal customers would know anywhere — and compare them. To keep things simple, we’re comparing dark and medium roasts.

Besides the company’s donuts and variety of breakfast items, this java blend is Dunkin’s claim to fame. The 100 percent premium arabica beans are roasted to medium perfection and blended with care to deliver the same high-quality coffee Dunkin’ customers get in-store. 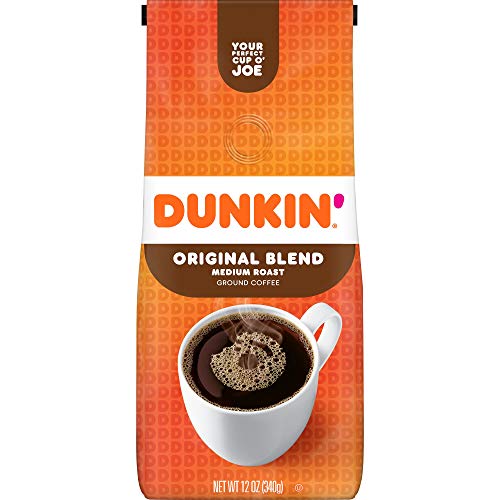 Dunkin' Original Blend Medium Roast Ground Coffee, 12 Ounces
Check Price on Amazon If you click this link and make a purchase, we earn a commission at no additional cost to you. Last Update: 2022-01-17

Much like Dunkin’ Original, Starbucks’ House blend has been around since the very beginning. It’s also made of 100 percent arabica coffee beans, and these are sourced from Latin America. With its notes of cocoa and toffee, this slightly sweet brew pairs well with milk and creamer, but tastes just as good on its own. 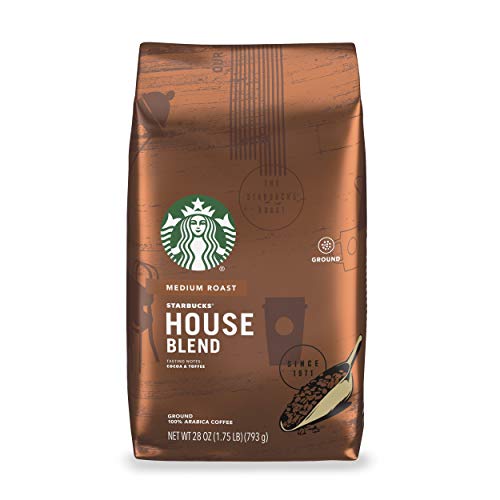 Dunkin’ Dark boasts the stronger coffee flavor you’d expect from any dark roast…and given its manufacturer, it’s probably safe to say the joe’s bold flavor pairs well with a sweet donut. The 100 percent arabica beans for this blend are sourced from Rainforest Alliance Certified growing regions. So, you can rest assured that the contents of your coffee cup aren’t just good for you, but also for the farmers and environment that produced it. 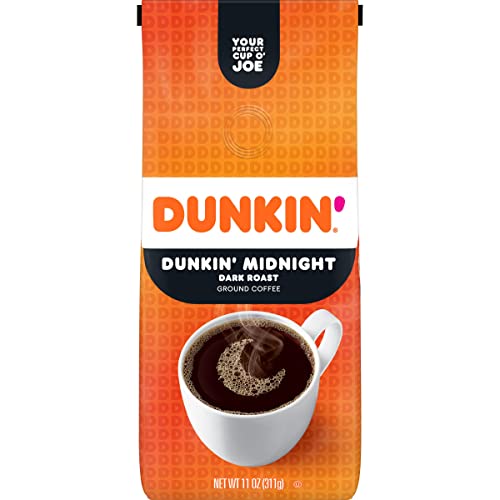 Dunkin’ Midnight Dark Roast Ground Coffee, 11 Ounces
Check Price on Amazon If you click this link and make a purchase, we earn a commission at no additional cost to you. Last Update: 2022-01-18

Starbucks’ Sumatra blend is known for its full-bodied and strong coffee taste, but the herbal notes give it a bit of spice and a nice, earthy aroma. This particular blend is one of Starbucks’ most popular offerings, and once you take a sip of the brew made with 100 percent arabica beans from Indonesia, you’ll understand why so many go crazy for it. Pro-tip: try brewing these beans with a French press to get the most of the blend’s flavors! 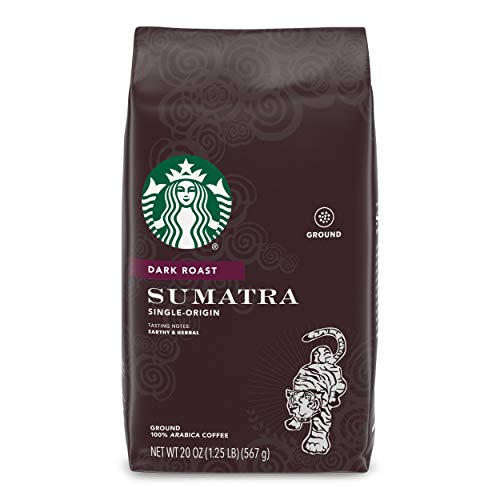 Is it possible to bring the sentimentality and taste of either coffee shop home? Unfortunately, no, not really.

There are so many variables when brewing coffee, including water, temperature, grind size, type of machine, tamping pressure, and storage. Plus, the taste of a Dunkin’ or Starbucks drink is as much in the store’s aroma, noise, and general ambiance as it is in the coffee. This means creating a perfect coffee shop replica drink at home is pretty impossible.

That doesn’t mean you can’t brew something delicious, though; just make sure to avoid common homebrewing mistakes, and you’ll be fine.

So, which is the superior coffee shop?

Having weighed up Dunkin’ and Starbucks in-house and at-home coffee offerings, it’s annoying to declare that there simply isn’t a standout winner. But that thought leads us to think crowning a victor boils down to individual taste…and marketing! You see, the biggest (and only) factor polarizing the two is the brand itself.

If you want decent coffee at a good price, Dunkin’ is the champion. They’ll take your coffee needs seriously and have designed stores to get you in and out fast so you can continue your day.

But if you want a typical coffee house experience, then it has to be Starbucks. The comfy seating, vibe, and ambiance all work like a siren lulling you to part with your cash. The mermaid sings, “come, grab a coffee and relax for a while.”

Which is your champion? There’s only one way to find out!

Madagascar Coffee: An Essential Part Of Life And Culture

Can You Burn Coffee?

The Ultimate Guide to Peruvian Coffee