Cold Brew Coffee Benefits That Might Just Make You Try It

As an aspiring home barista and self-confessed coffee nut, you’ll already be one of the 62 percent of Americans who enjoy some variety of coffee-based drink every day. Many younger coffee drinkers are switching to gourmet, with almost 60 percent preferring a specialist, gourmet brew to your bog-standard drip-brewed beverage.

But did you know that cold brew coffee is rapidly becoming the drink of choice amongst many younger coffee aficionados, with sales growing exponentially year-on-year? 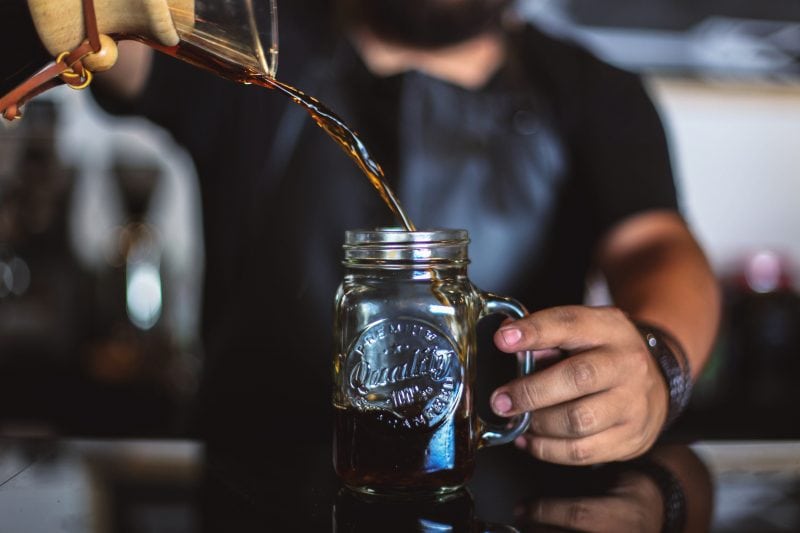 So, what’s the deal with cold brew coffee and does it really have any benefits?

Well, for starters let’s clear up some confusion. After all, you want to know exactly what you’re ordering the first time you venture into the world of cold brew coffee.

What is Cold Brew?

Let’s be clear about this, cold brew is not the same drink as iced coffee. Iced coffee is simply regular coffee that’s served over ice, either mixed with milk or left plain.

Here’s a quick video showing how to make a basic cold brew:

Cold brew is made from coffee beans that have been steeped in cold water for 12 to 24 hours, rather like you would when using an oversized tea bag, but using coffee. It’s time, rather than heat that extracts the flavor, caffeine, and sugars from the coffee beans. The steeping process is more sympathetic to the coffee bean, so you don’t end up with the bitter flavor that roasting can produce.

Nitro is just cold brew coffee that’s infused with nitrogen gas (yes, really). The coffee is stored in a beer keg and then served on draft. The idea behind using what’s essentially a beer tap to serve the coffee is that it produces a creamier, sweeter flavor. When you draw a glass of chilled nitro, you get what looks like a serving of Guinness, complete with a foamy, creamy head.

One absolutely essential thing to know is that nitro is never mixed with milk or ice – that would be a massive no-no and would certainly cause raised eyebrows and exclamations of horror in your local hipster haunt. You could even get banned.

So, the bottom line; if you like your coffee strong, black, creamy and ice-cold, nitro could be the way to go for you.

Well, the same basic steeping process is used as for standard cold brew, but chicory is added to the grounds, giving the finished brew a sweet flavor. Milk and sugar or sweetener is added to give the end result a creamy, cold drink complete with a nice strong caffeine hit.

Now you’re suitably informed, let’s look at what makes cold brew (and its variants) so good.

Reputedly, drinking cold brew coffee has many benefits over a steaming mug of scalding hot Java. We cut through the hype to bring you the good, the bad, and the ugly of cold brew coffee.

Thanks to the long steeping process, cold brew’s coffee-to-water ratio is reckoned to be approximately 1:60. This compares with the usual drip coffee ratio of around 1.20. Whoa! That’s a lot of caffeine right there.

However, remember that people usually dilute cold brew coffee concentrate with milk, cream, or water,. This process reduces the caffeine concentration. Also, there are several variables to consider:

So, you can see that although cold brew coffee is definitely caffeine laden, it doesn’t necessarily follow that your finished brew will give you the jitters for a week. If you need to sharpen yourself up mentally or physically, you just need a cup of cold brew that’s tailored to suit your individual physical make-up.

Thanks to its high caffeine content, cold brew coffee can help you to lost weight.

How? Well, by drinking a cup of cold brew or nitro following a workout, you’ll increase your post-energy expenditure, or after-burn effect. The after-burn effect is the term used to describe the body’s ability to continue burning calories after exercise.

Regular coffee has this effect too, but just imagine how much more fat you can burn by increasing your caffeine hit with a cold brew or a nitro. And all from the comfort of your favorite armchair.

The caffeine contained in a cup of Joe increases the flow of blood to your brain, thus boosting your cognitive function. Research carried out by the Human Nutrition Research Center on Aging shows that the bioactive compounds found in coffee can reduce cognitive deficits, as well as improving motor function.

Although these tests were carried out on lab rats, it’s thought that the same effects are seen in people. And the higher the coffee content of the brew, the bigger the brain boost you’ll receive.

The heat of the drip brewing method can produce a bitter flavor to the finished brew.

The brewer does not use heat at all in the process of making cold brew coffee, so the flavor tends to be smoother and the coffee is less acidic. For this reason, those who have sensitive stomachs or suffer from acid reflux generally tolerate cold brew coffee better.

In addition, if you decide to make your own cold brew coffee, you can choose your favorite beans, depending on your own personal taste. Given that the end result is typically less bitter in flavor, you might want to try a few of the more robustly flavored beans that you would otherwise pass over.

Exciting recent research claims that drinking a daily cup of Joe can be good for your health and may even lengthen your life. How come? Well, coffee increases the body’s fat-burning capabilities, increases insulin sensitivity, and decreases the risk of dementia – and it tastes great too. What’s not to like?

Most of these studies are based around the antioxidant content of coffee. Antioxidants, especially chlorogenic acid, are the body’s natural anti-inflammatories, and coffee contains them in abundance. Although there are no studies specifically aimed at cold brew coffee, it’s thought to be likely that some antioxidants are left behind after the steeping process, together with oils and acids. Therefore, it follows that cold brew could be as good for you than regular hot Java.

Also, coffee contains more free-radical fighting chemicals than other caffeine-rich drinks such as tea. Free-radicals cause certain cancers, so the less of them in your body, the better.

Coffee is reputedly the best beverage for anti-aging effects. That’s because of those antioxidants again. Antioxidants can help to protect your skin from harmful chemicals found in the air and from the sun’s damaging UV rays, helping to keep your skin supple, moisturized, and youthful.

If you’re watching your weight but struggling to kick the sugar habit, cold brew, especially nitro is the best coffee beverage option for you.

Let’s say that you usually add two sugar packets to your brew and you also take milk or cream. That adds up to about 70 calories. If you have several cups of coffee every day, all those extra calories can soon spiral out of control.

Nitro is served without milk, cream, or sugar. That’s because it simply doesn’t need these additives; the nitrogen infusion gives the end result a rich, creamy, sweet taste. Devotees of nitro even claim that it tastes rather like milk chocolate.

So you can enjoy a creamy, sweet, chocolate flavored coffee, without jeopardizing your weight loss efforts. Just remember to pass on the pastries.

This is another caffeine related benefit. Along with boosting your alertness and cognitive function, the stimulant has actually been shown to enhance your mood.

Additionally, the benefits of caffeine for mood and brain function has proven especially beneficial for older adults and sleep deprived individuals.

While other coffee types involve extensive, expensive kit, cold brew is a very “set-and-forget” type of brew. Plus, one brew can let you an entire week, so there is no need to make a new brew every day.

As far as the supplies, all you really need are your grounds, a mason jar, and a filtration method. That can be anything from cheesecloth to a French press. You can even use a regular paper filter as long as you secure it.

You may have noticed that several of these benefits are not cold brew specific. In fact, cold brew shares many benefits with your typical hot brew. However, there are some benefits of each type that are exclusive to that temperature preparation.

The main leg up that the hot stuff has over the cold is antioxidant content. The hot brewing process extracts more of the bioactive antioxidant, chlorogenic acid.

Additionally, most of the studies conducted with coffee have focused exclusively on hot brews.Thus, it is much easier to know that hot brew has benefits for your health than it is to determine how you will or will not be affected by drinking cold brew.

Despite the lack of medical research this brew, there are a few places where we know certain people can benefit from going for cold brew.

First, the lower acidity is perfect for people with gastrointestinal issues. Also, one of the biggest pluses to going with cold brew does not have to do with health science at all. It is about your lifestyle.

Busy people don’t always have the time to brew their perfect pick me up each weekday morning. With cold brew, you simply stick the grounds and water mixture in your fridge on a Saturday, filter it on Sunday, and you are good to go for the rest of the week.

Once you have the concentrate hanging out in your fridge, all you need to do is dilute it to taste and run out the door. Plus, you don’t have to wait for it to cool down to catch up with you. Furthermore, the materials for making cold brew are as accessible as you can get.

Seriously, you could pick up everything you need at even the most remote general stores. And if you want to steep things up a notch, all you would need is a decent grinder and whole beans instead of preground. It’s cheaper than a drip brewer, and, in our opinion, equally (if not more) convenient.

Drinkers of cold brew coffee, including its variants, can look forward to a longer life, sharper brain function, and a boost to their weight loss attempts. All this is thanks to the steeping process and in the way that this gourmet brew is created.

You might want to check out a cold brew or nitro at your local hipster haunt before you try this at home. The taste’s not for everyone. But if you want to catch the wave with the in-crowd, cold brew is the way to go. Dude.

Do All Keurigs Have Water Filters? Find and Replace Yours

Bosnian Coffee: What Is It and How Do I Make It?

How To Turn Off Flashing Clean Light On Mr. Coffee

How To Clean a Moka Pot: A Complete Guide to Maintaining Your Coffee Brewer