Between butter, Nitrogen, and eggs, salt might be the tamest thing we’ve seen people throwing in their coffee lately besides sugar. Now, we aren’t talking about mistakenly tapping in some crystals from the wrong shaker on the table. People are deliberately putting salt in their coffee. And we’re here to tell you why. 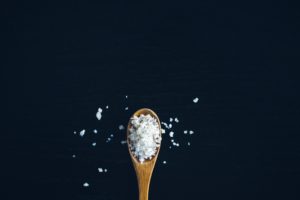 The story goes that adding salt to a cup of coffee will supposedly cut the bitterness of the beverage. Additionally, it is said to help negate any staleness. So if you’re trying to make sure you’re getting the most of your grounds, this might be just the thing for you.

So whether you’re trying to spruce up an underwhelming brew or improve your own supply, adding salt could potentially improve your coffee routine.

You might be wondering how exactly that works. Well, let’s begin with some information on your tongue. That’s right, the salt does not actually do much to your grounds or brew before you actually drink the coffee. Instead, it actually just tricks your brain into ignoring the bitterness. Here’s how:

You probably already know that you have thousands of taste buds on your tongue, and that they are responsible for recognizing the 5 basic tastes: sweet, salty, bitter, sour, and umami. Each of these, except for bitter, is signaled by similar biological mechanisms and salt (the substance) is able to amplify them.

However, bitterness is signaled in a different way. Your taste buds actually release a calcium ion to signal that taste, but salt, instead of amplifying this reaction, actually overrides it. Thus, it masks the bitterness.

Surprisingly enough, adding salt to coffee is not exactly a new trend. In Northern Scandinavia, Siberia, Turkey, and Hungary, it has long been a relatively common practice. In coastal regions especially, adding salt in the form of brackish water has been a longstanding practice within their coffee culture.

As we explained before, the reason salt works is due to its interaction with your tastebuds rather than with the coffee itself. So, it follows that it wouldn’t matter whether you put the salt in the grounds or the brew itself as far as its effects go.

However, the problem arises of whether you want to taste the salt or not. We’re betting most people would rather not.

There are plenty of coffee and cooking experts (including Alton Brown) that recommend adding salt to your grounds before brewing. Proponents of this method recommend adding 1/4 teaspoon of salt to every 6 tablespoons of grounds. Supposedly adding it to the grounds helps ensure that you don’t taste the saltiness while still helping reduce the bitterness or staleness.

However, sometimes you can’t add the salt to the grounds because you aren’t the one brewing your coffee. So does it still work if you add it in after the fact? The short answer is yes. It will address the bitterness; however, the trade off is that you’ll probably be able to taste the salt.

So, Should You Add the Salt?

As far as we can see the best circumstances in which to try adding some salt to your coffee are as follows:

Your beans/grounds are over-roasted or too dark.

No one is perfect. So it’s totally possible that you’re working with coffee that’s a little out of your tastes. If that’s the case, adding a bit of salt to your grounds could help mitigate the issue. That way. you won’t have to toss or pass on what you have on hand.

You coffee is going stale.

As we mentioned, adding salt also helps combat staleness. So if you’re not keen on tossing out what. you have left in your stash, try adding a bit of salt!

You aren’t a cream and sugar fan, and you’ve been served a subpar cup.

We’ve all been there. You NEED that caffeine fix, but can’t get to any of your go-to’s, so you settle for something you wouldn’t normally go for. Most people stick to the trusty cream and sugar; however, not everyone finds that to be a suitable alternative.

If that’s the case, try throwing in a bit of salt to make your cup a bit more sippable. Just keep in mind, you will probably be able to taste it.

No judgement here; we all have our tastes. So if you’re someone who just adores the taste of salt, far be it from us to stop you from adding it to your coffee too. The lack of bitterness will probably just be an added bonus for you.

Honestly, there are plenty more ways to make sure you are brewing good coffee than adding extra sodium to it. If you’re looking to improve your at-home brew here are a few tips to keep in mind to help improve the quality:

As far as trying to fix a botch cup outside of your home, we personally prefer to just stick with sugar and creamer. However, if you prefer it black and can’t get over the bitterness of a meh brew, then try  the salt trick and see if it works for you!

How To Wrap Coffee Mugs For Gifts