What Is Barrel-Aged Coffee? Our Guide and Top Picks!

Plenty of new coffee industry trends pop up each year, and while some only have 15 minutes of fame, others stick around much longer. Barrel-aged coffee is one trend that has managed to hold a steady spot in coffee lovers’ hearts. Let’s dig deeper into what that is and why it’s so well-loved.

The batch of beans used can make or break a good cup of coffee. Sure, the brewing method matters, but if you have not-so-great joe, not even the best pour-over in the world or the most expensive espresso machine on the market can make it taste decent.

Since it’s all about the beans, it’s a good idea to be picky about what kinds you brew. Serious coffee enthusiasts are probably already super-selective and have a running list of brew-worthy beans.

But we’re willing to bet there’s a category they missed, and thanks to this coffee’s one-of-a-kind flavor profile, that’s a real shame.

Meet barrel-aged coffee, the trend that’s taken the java industry by storm over the past few years.

Do you want to know why it’s become such a popular choice among specialty coffee fans and if it’s worth trying? Then, read on! We’ve also got a few product suggestions for you to try.

But first, we have to address the elephant in the room. 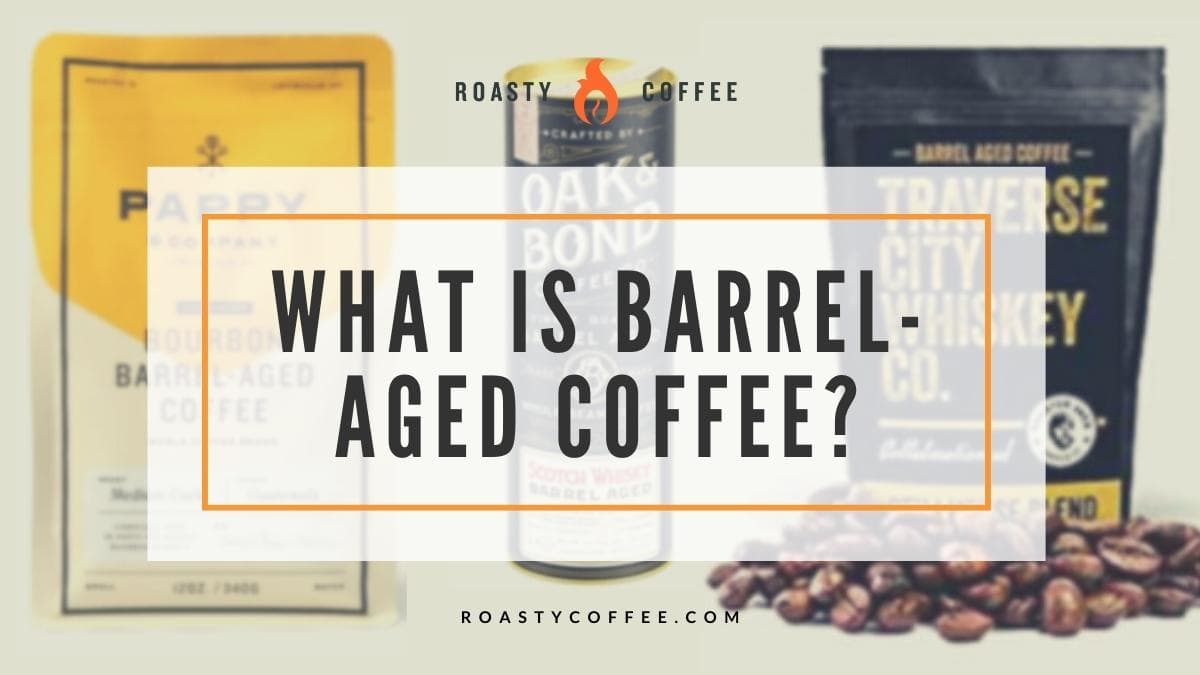 At a Glance: Our Top Picks for Best Barrel-Aged Coffee

What Is Barrel Aged Coffee, Anyway?

Making barrel-aged coffee involves just what you thought it might: aging green coffee in barrels previously occupied by wine, whiskey, or rum.

All the unique flavors of whatever beverage used to be in the vessel seep into the green bean, creating a remarkable sipping experience. 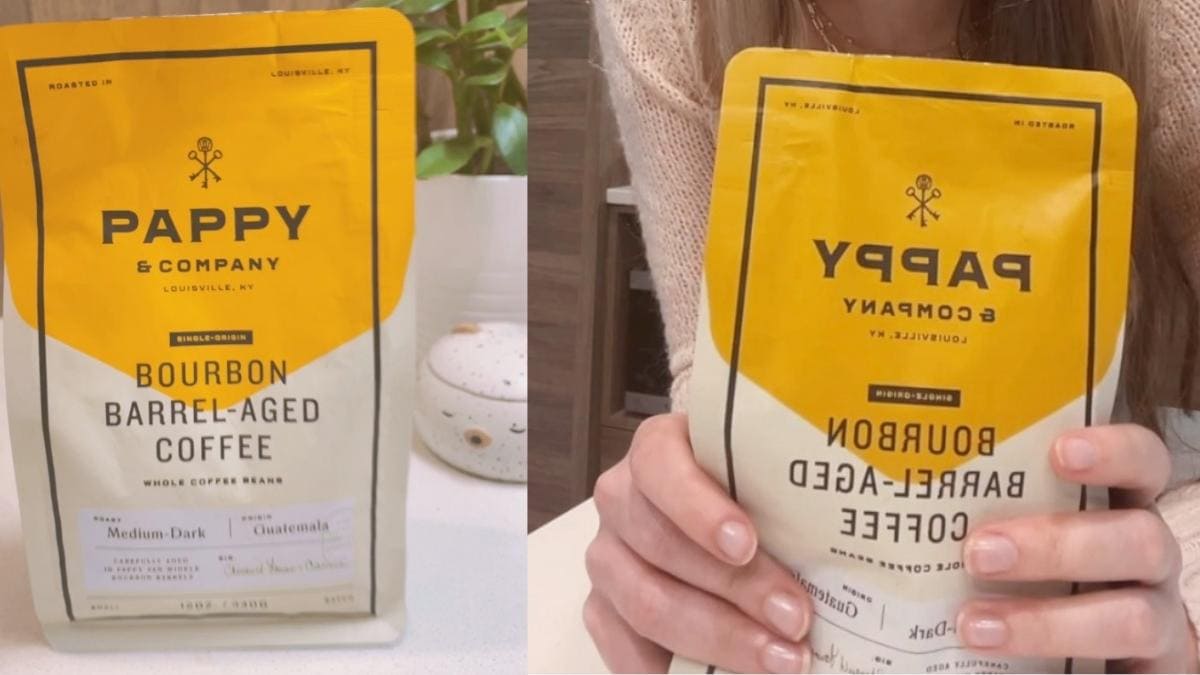 The best part is that no taste-enhancing additives make their way into the beans. Rather, these flavors infuse into the beans naturally, making it a healthier choice for those who try to stay away from chemicals and artificial flavors as often as possible.

How Is Barrel-Aged Coffee Made?

Making this type of coffee is a process:

Who Started the Barrel-Aged Coffee Trend?

We don’t know with total certainty who first decided it was a good idea to try barrel-aging coffee beans, but Ceremony Coffee usually gets the credit for doing it first.

In 2012, roasters at the Annapolis-based company started experimenting with different kinds of coffee beans in multiple wine barrels and whiskey barrels.

Customers went crazy for Ceremony’s barrel-aged beans, but unfortunately, once they were gone, they were gone for good; Ceremony Coffee decided not to continue producing and selling this joe.

Luckily, plenty of other coffee producers and roasters followed the company’s lead and stepped in to continue making the stuff.

Even Starbucks hopped on the barrel-aging bandwagon with a whiskey barrel-aged cold brew coffee that debuted at the Reserve Roastery in 2017.

Check out some of the best coffee beans we found in the barrel-aged category:

Full disclosure: Pappy & Company sent us a sample of its bourbon barrel coffee. Because we were and still are intrigued by barrel-aged beans, we were eager to try this joe. And we’ve got to say we weren’t disappointed.

We think bourbon lovers looking to incorporate their favorite spirit into their morning routines and those wanting an alternative to their usual bag of beans will agree Pappy & Company’s offering is worth sipping.

We brewed the freshly ground coffee in an AeroPress and added steamed milk to make a latte, but no worries if you prefer black coffee; it tastes great by itself, too! 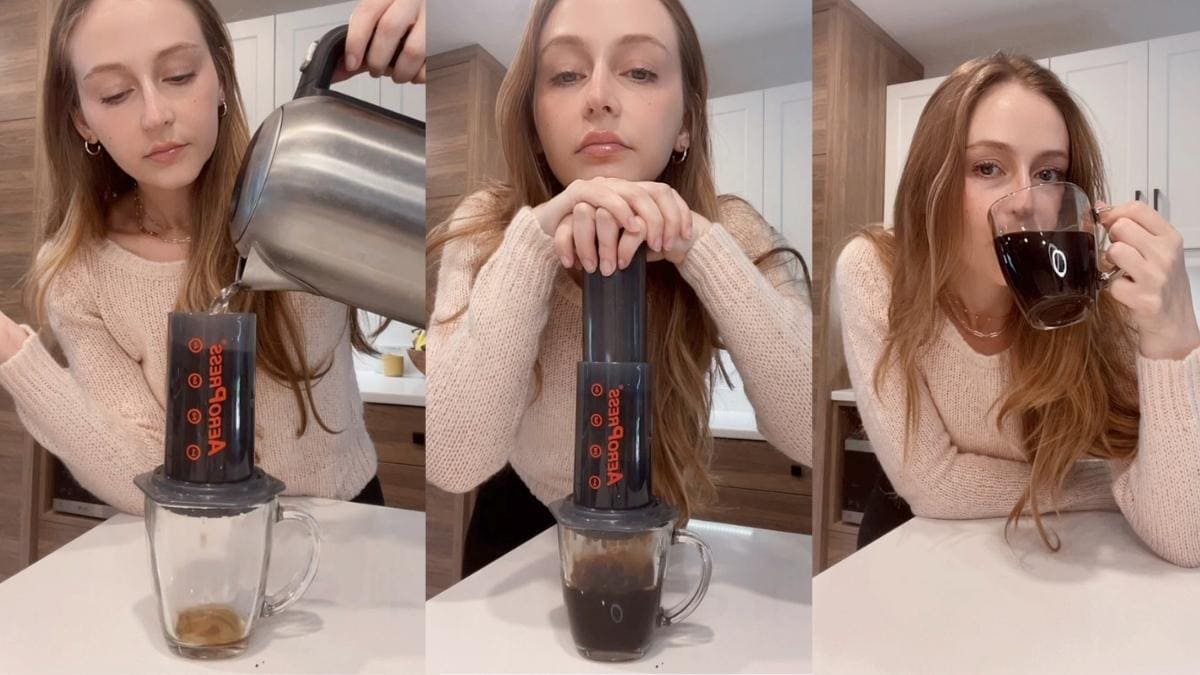 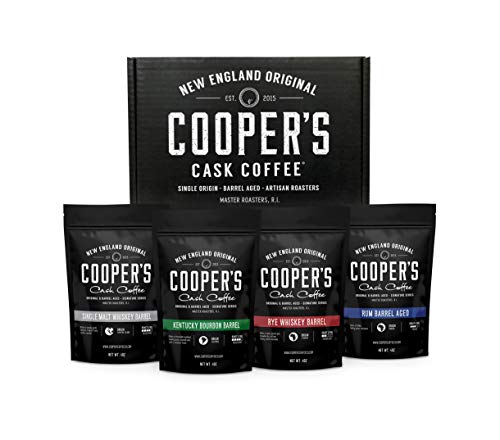 Thanks to Cooper’s Cask Coffee’s bourbon and whiskey barrel-aged coffee set, it’s easy for you to sample different barrel-aged brews.

This sampler box includes four batches of four-ounce servings of beans, each from different origins and infused with an array of spirits:

Cooper’s Cask left each batch of these beans to age longer than usual — for 45 to 60 days, to be exact — so they have a unique taste compared to other coffees on the market.

After brewing each bag in the sampler, figure out which of these you like best. Then, keep the barrel-aged brewing party rolling by picking up a full-sized package! 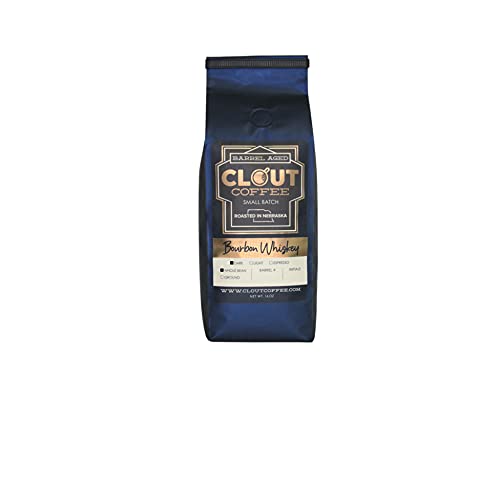 If you’re crazy about Colombian beans and smooth bourbon, Clout Coffee’s batch of coffee will make your day whenever you filter it through your brewing machine.

These single-origin beans create a full-bodied joe with hints of vanilla, dark chocolate, and a bourbon finish that you can drink in the morning before a long day or after dinner with a serving of dessert.

Clout Coffee was founded in 2018 by Carole Sprunk, a coffee lover who wanted nothing more than to build a brand around her passions: empowering others and enjoying joe with loved ones.

Initially, Sprunk’s business only sold bourbon coffees, but since its establishment, Clout Coffee has ventured into selling rum and whiskey barrel-aged coffee. So, after trying this batch, be sure to explore the rest of the company’s product roster. 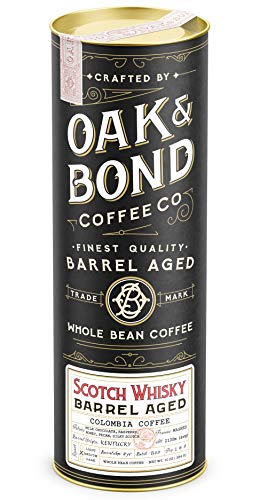 Oak & Bond Coffee Co.’s name comes from two aspects that founders Brian and Lauren highly valued: the American oak barrel in which their first batch of beans aged and the bond shared by the happily married couple.

The two wanted to find vibrant beans they could share with their loved ones and found them on a micro-lot farm in Brazil. These are the beans that launched Oak & Bond into business, and the company has offered high-quality coffees ever since, including its Scotch Whisky barrel-aged coffee.

The scotch barrels in which the age of the beans give them a sweet fruitiness that pairs beautifully with the natural taste of the South American java. 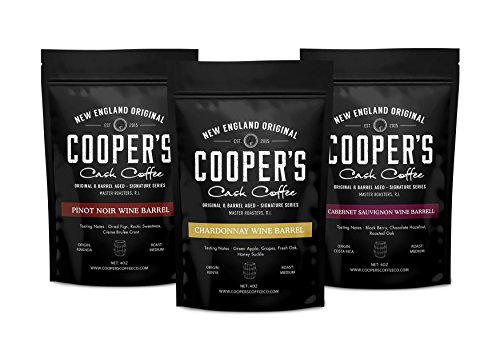 If wine is your favorite type of alcohol, you’re in good company; around 75 percent of adults drink wine. We couldn’t leave wine lovers out of the barrel-aged coffee fun — there are so many of you!

So, we thought it wise to include Cooper’s Cask Coffee’s wine barrel-aged sampler in this buying guide.

In this three-bag coffee set, you get the following: 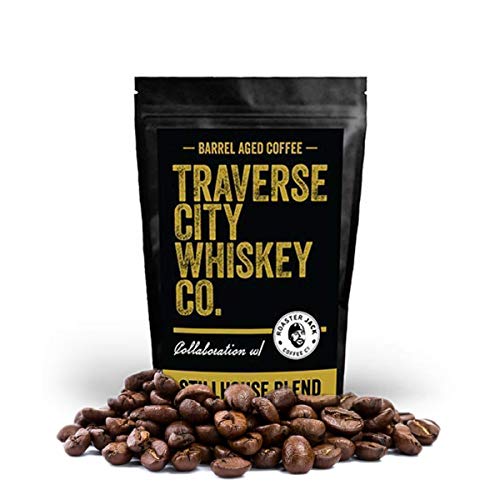 Traverse City Whiskey Co. Barrel Aged Coffee | Stillhouse Blend Aged in 10 Year Old Bourbon Barrels | Medium Roasted Beans for a Bold and Smooth Taste | 12oz
Check Price on Amazon If you click this link and make a purchase, we earn a commission at no additional cost to you. Last Update: 2022-12-05

Give Traverse City Whiskey Co.’s Stillhouse blend a go for something smooth, elegant, and free of artificial flavorings.

Traverse City Whiskey Co. knows whiskey (buy a bottle of the Michigan-born stillhouse’s product for confirmation), so it’s no surprise the company’s whiskey barrel-aged coffee is an Amazon bestseller.

These Guatemalan beans spend time aging in 10-year-old bourbon barrels before roasting to a medium level. The aroma of these beans is just as impressive as their taste — you’ll probably smell this coffee before you even open the bag!

Roasting green barrel-aged coffee beans leaves their alcohol content so low that a caffeine buzz is all you get from them (unless you go the decaffeinated route).

The flavors of whatever alcohol previously occupied the wooden barrel remain, but nothing else.

The type of barrel used and the alcohol previously in it determine how a batch of barrel-aged beans tastes. Between those two factors, there’s a variety of possible flavor profiles.

You should know that no two batches of aged coffee taste the same, even if they spent time in the same barrel. The more you use an aging barrel, the fainter the stored alcohol flavors become. So, each batch is milder than the last.

How do you drink barrel-aged coffee?

Coffee lovers can drink barrel-aged brew the same way they would regular joe. You can pour in a splash of milk or creamer or a drizzle of flavored syrup, but because of its unique flavors, this brew is a prime contender for enjoying plain (sans add-ins of any kind).

Whether you serve these coffees in hot, iced, or cold brew form is up to you!

Does Starbucks have barrel-aged coffee?

Yes, Starbucks sells whiskey barrel-aged cold brew, but there’s one significant caveat: you can only find it at Starbucks Reserve locations.

Branch Out with Barrel-Aged Coffee

Now, it’s time for the moment of truth, the verdict: is barrel-aged coffee worth the hype, or is it just another coffee trend that’ll fade in a few years?

After brewing the batch of Pappy & Company bourbon barrel-aged coffee we received, we’re on Team Barrel-Aged Beans, and we think this type of coffee is worth trying if you’re ready for something new.

What Is the Best Chemex Scale for Coffee in 2022?

Fire Dept. Coffee Review: Is This Coffee Brand Worth It?

Craft Coffee Review: Crafted for Coffee Lovers On A Budget

Nespresso Pixie vs. Essenza Mini: Which One Is Better?