A lot of people tend to think espresso drinks are pretty much all the same. And while it is true many of them are made of the same ingredients, other traits — texture, taste, and temperature, to name a few — set them apart.

Don’t know the difference between a cortado and a cappuccino? Don’t worry — we can break it down for you without breaking a sweat!

Read on, and the next time you’ll visit a coffee shop, you won’t have to bombard the barista with your questions, like, “what’s in a cortado?” or “what’s in a cappuccino?” Plus, you’ll be able to impress your friends by confidently ordering a drink they may not know anything about! 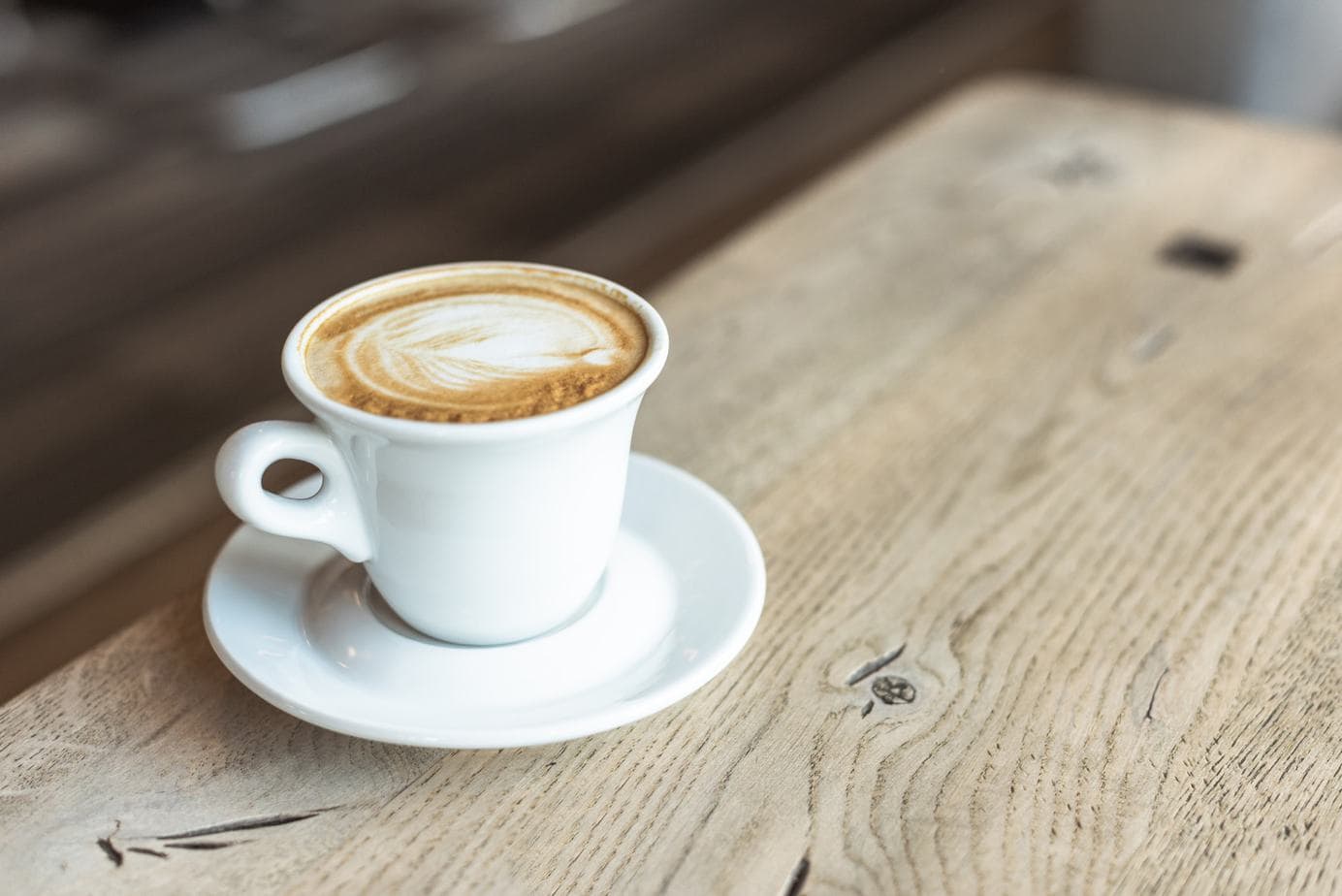 A cortado, which is sometimes called a Gibraltar, contains two simple ingredients: a shot of espresso and a lightly steamed layer of milk. The milk is steamed just enough to see a little line of foam at the top. This is enough foam to create latte art, but unfortunately, not quite enough for a foam mustache.

The cortado is made with a 1:1 espresso-to-milk ratio, with the milk cutting the bold espresso flavor and toning down the acidity. This is actually where the drink gets its name; cortado comes from the Spanish verb cortar, which translates as “to cut.”

Cortados are traditionally served in a small, four-ounce espresso glass. This is why, if you’ve ever noticed, Starbucks (a.k.a, your typical coffee shop) only serves it in a size short, which can be disappointing to some people. But you can always just order an extra for a friend and drink both!

And, what’s in a cappuccino? 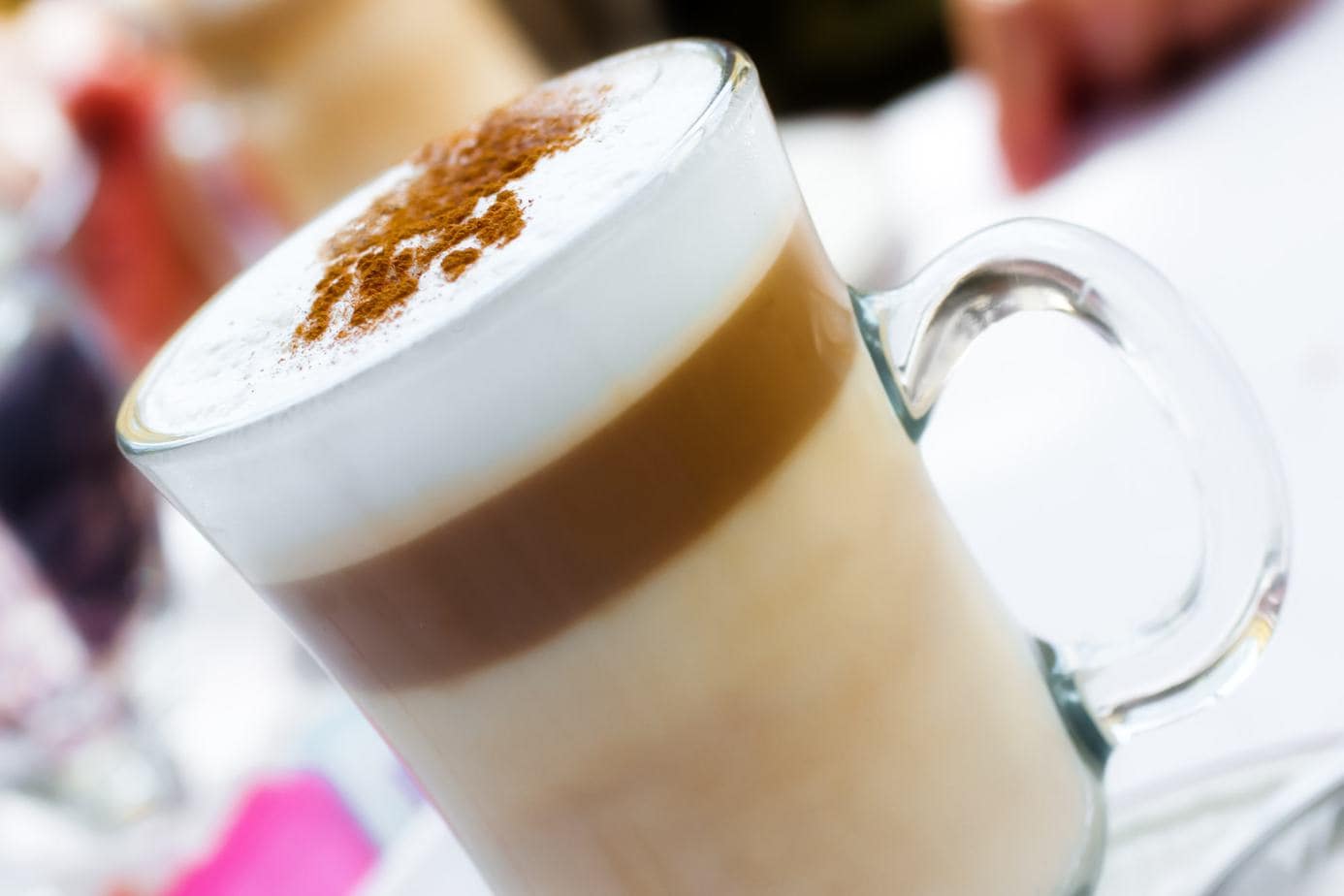 Ah, the cappuccino…one of the many very popular espresso drinks and likely the reason we all got hooked on coffee in our teenage years.

What’s in this drink that makes it so popular? The cappuccino is split into three equal parts: 1/3 espresso, 1/3 steamed milk, and 1/3 milk foam. The milk is steamed until it creates the tiny bubbles that form the microfoam. The foamed milk is then poured on top of the espresso, which creates a thick layer of sweet foam on top. Sounds heavenly, doesn’t it?

The cappuccino, unlike the cortado, is known for its foamy milk — perfect for making incredible latte art and milk mustaches — and typically comes in different sizes (make ours a large, please!). It can be made with two shots (also called a double shot) of espresso, resulting in a double cappuccino.

And, of course, you can’t forget the toppings! Chocolate, cinnamon, and whipped cream are just a few of the delicious treats that take this drink to the next level!

Now, what’s the difference between a cortado and a cappuccino?

Both drinks contain milk and usually one shot of espresso, but that’s where the comparisons end. These two differ in taste, texture, quantity, assembly, and pretty much every other aspect. 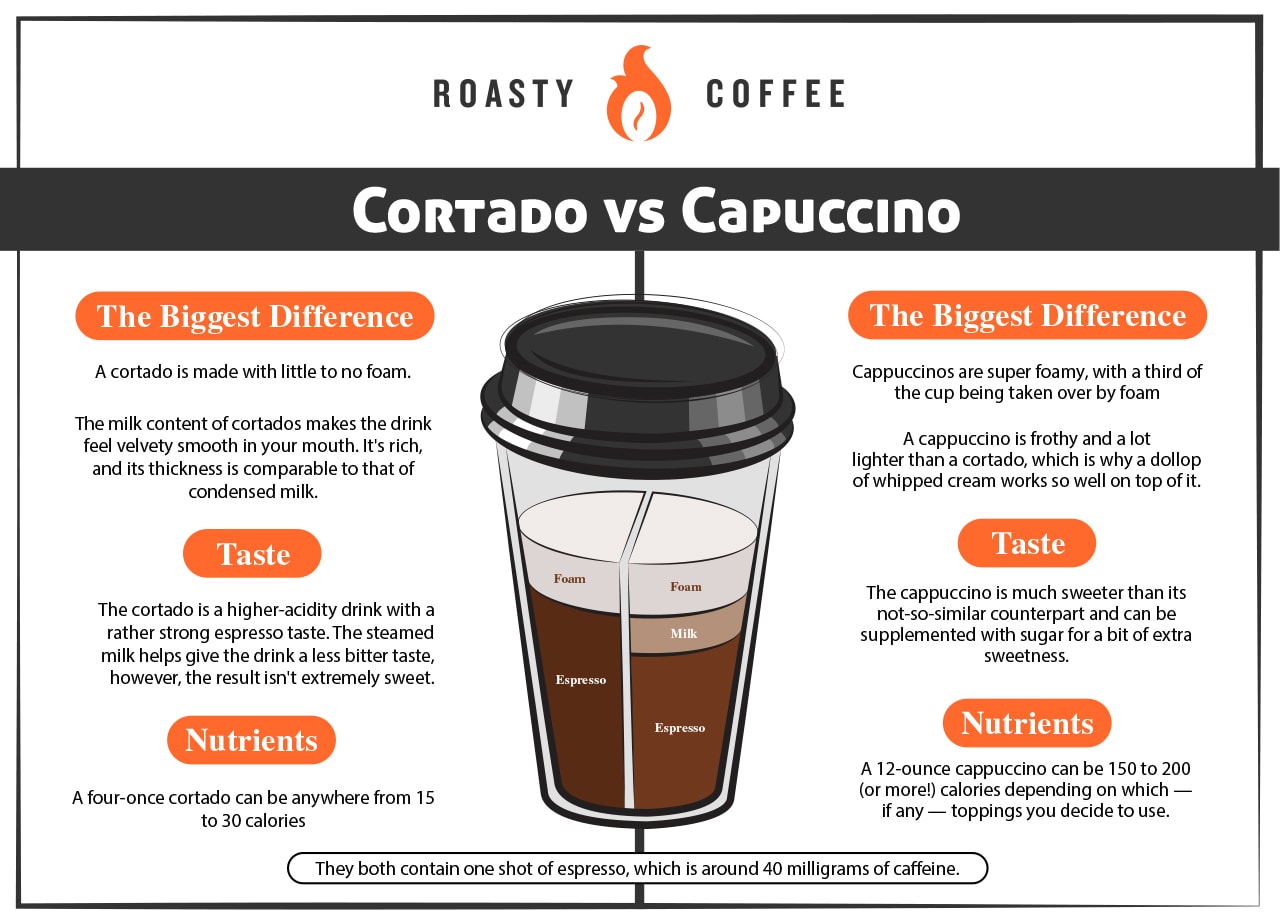 The biggest difference between these two drinks is the foam. Cappuccinos are super foamy, with a third of the cup being taken over by foam. A cortado, on the other hand, is made with little to no foam. But no foam doesn’t mean no fun; some people like it that way.

Another big difference between the classic espresso drinks is the milk texture. The milk content of cortados makes the drink feel velvety smooth in your mouth. It’s rich, and its thickness is comparable to that of condensed milk.

A cappuccino, however, is frothy and a lot lighter than a cortado, which is why a dollop of whipped cream works so well on top of it.

As far as taste goes, these two are nowhere near similar. The cappuccino is much sweeter than its not-so-similar counterpart and can be supplemented with sugar for a bit of extra sweetness. (And, as we mentioned before, a drizzle of chocolate and a bit of whipped cream also pair well with this drink to satisfy your sweet tooth if plain sugar just isn’t cutting it.)

The cortado, on the other hand, is a higher-acidity drink with a rather strong espresso taste. The steamed milk helps give the drink a less bitter taste, however, the result isn’t extremely sweet.

The caffeine content in both drinks is usually the same. They both contain one shot of espresso, which is around 40 milligrams of caffeine.

However, more differences between the delicious espresso drinks occur when you start counting calories. A four-once cortado can be anywhere from 15 to 30 calories, whereas a 12-ounce cappuccino can be 150 to 200 (or more!) calories depending on which — if any — toppings you decide to use.

While a lot of our favorite drinks share a base of espresso and milk, so many of them are different from each other. Some of the differences between espresso drinks can be as simple as increasing the milk quantity in the concoction or just steaming it a little bit longer.

The cortado and cappuccino are simply two different versions of espresso and warm milk, and both should be appreciated for their differences. They both boast that wonderful coffee taste you know and love in their own unique ways.

And if after reading, you still can’t distinguish between the drinks, then maybe it’s best to try to taste the difference at a few coffee shops in San Francisco (which has been called the West’s coffee capital). Once you try them both, you’ll know that, despite being made with the same ingredients, these two drinks aren’t the same.

The Science Behind The Coffee Bloom