Chemex Vs French Press: The Best Manual Brewer To Suit Your Taste

If you are a genuine coffee connoisseur like us, you know the difference between coffee and espresso. And you also know that the differences don’t end there. Today, there are so many brewing options available to make the best cup of coffee for your caffeine needs.

One of the most revolutionary developments in the coffee industry was the invention of the espresso machine in 1884. The French press method was discovered even sooner than that, in 1852. Then, more innovative brewers followed such as Aeropress, different pour-over methods including Hario V60, Kalita, and of course, the Chemex.

Even though both Chemex and French press differ from the espresso or drip methods by the fact that they are manual, they are by no means the same.

What are the basics of both of these coffee brewers? How do the two compare? And which one is more suited to your caffeine needs? Today, we will give you a complete rundown of the Chemex and French press brewing.

A Quick Rundown Of Both Brewing Methods

Both of these methods are types of manual brewing that give you more control over your resulting cup. First of all, we will give you a quick introduction to how they work before we get into outlining the differences and advantages of the French press vs Chemex.

French press, also known as cafetière, was officially patented in the late 1920s and is considered one of the most accessible manual methods of brewing and is used by about 2% of coffee drinkers in the United States.

The popularity comes from its ease of use, low price tag, and easy accessibility even from mainstream stores. The French press gives you more control over your resulting cup and the brewing is straightforward and not as intimidating as other methods like Aeropress or pour-over.

So how to make a coffee with the French press? Begin coarse coffee grounds and fresh hot water. After the first pour, let the coffee bloom for 30 seconds, then pour the rest of the water in the French press and let the coffee extract for around 2-3 minutes. Then, simply push the stainless steel plunger down to separate sediments by the build-in mesh filter.

The full extraction and the lack of the paper filter results in a full-bodied and robust taste of your coffee. 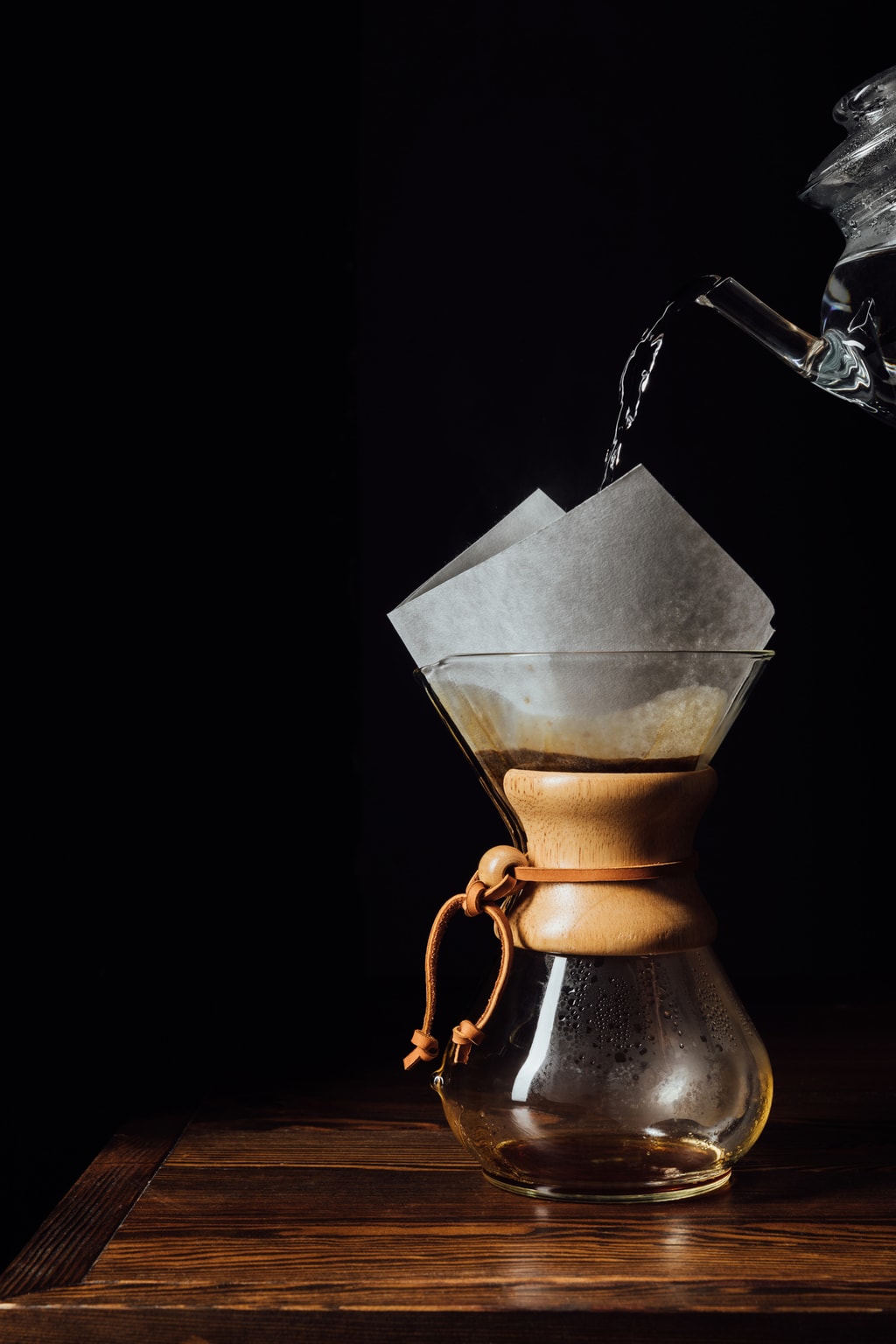 The Chemex was invented by an American chemist Peter J. Schlumbohm in 1941 and put on the market the subsequent year. It is an all-glass flask in an hourglass shape. It comes as no surprise that its design was inspired by laboratory equipment.

The unique Chemex design can be seen as a work of art. This is confirmed by numerous museums around the world where Chemex can be found on display, including the MOMA in New York. It has been also selected by the Illinois Institute of Technology as one of the 100 best-designed products of modern time.

The coffee brewing process is similar to that of pour-over systems. However, Chemex uses a thicker paper filter which makes the brewing process slower, removes the oils, and results in a cleaner cup of coffee.

To make a coffee with Chemex, rinse the filter with hot water to get rid of the paper taste as well as heat the glass coffeemaker. Then, let the coffee bloom after the first pour. After that, keep pouring the water over the coffee grounds in a continuous stream.

Now that you know how both of these coffeemakers work, let’s get into the details of differences between the two.

The French press is commonly seen in kitchens and stores around the world and the reason is its ease of use. This straightforward method is affordable, fool-proof, and less complicated than some of the other brewing methods.

The laboratory design of Chemex brewer can be seen as quite intimidating for everyday use, especially for those who are just getting into manual brewing. And while it’s still fairly easy to use, the details of the brewing process such as deliberate movement when pouring or consistent water temperature can influence the taste of the resulting cup.

Clean Up And Versatility

With a French press, you don’t need any filters to buy and worry about and the plunger and its other parts can be easily taken apart and cleaned. The appeal of the French press also comes from its versatility. This coffeemaker can be used to make tea, a cold brew, or double brewed coffee.

With Chemex, you need to purchase disposable paper filters and while they make it easy to get rid of the used coffee grounds, the hourglass shape makes the brewer awkward to clean. They vary in size but they are mostly designed to make large quantities of coffee and not that useful when making a single cup.

Since the French press uses the full extraction method with 4 minutes of steeping time, the resulting cup has a robust and dark taste. And because there is no paper filter, no oils or acids are removed, which can make coffee quite bitter. On top of it, since the stainless steel plunger of the French press is not as effective at removing all the coffee grounds, as a result, some sediment may remain in your cup, which further contributes to the bitter taste.

Compared to that, Chemex produces coffee that has less bitterness, lower acidity, and no sediment. The filter used for Chemex is typically 20 to 30% thicker than a standard pour-over filter. This means that it collects more oils, removes acids, and results in a cleaner cup with more delicate tasting notes. While Chemex gives you a lot more control over the brewing, since most of the oils are removed, the coffee might be too mellow for some people.

Both of these brewers are more mobile and travel-friendly than a bulky espresso machine but the French press wins the battle on the portability field. They both come in different sizes and shapes and while Chemex is used of sturdy glass, it is bulky, awkwardly shaped, and fragile, which makes it easy to break. A small French press, however, can easily be a part of your coffee travel kit.

There is a similar time needed for both methods of preparation. However, making a coffee with Chemex requires more effort. You need to heat the brewer, get the filter ready, let the coffee bloom, and spend time to continuously pour water over the coffee grounds.

With the French press, you just pour the water in and come back to it when it’s ready, which makes it the most ideal choice for those who are looking for a fast coffee maker and want their morning cup of joe ready as soon as possible.

When it comes to the cost, the French press is the cheaper and more affordable option. Buying Chemex is an investment and it’s even more expensive than other pour-over methods. Chemex also comes with an additional cost of buying paper filters after the initial purchase.

Why does Chemex need a separate category when it’s just another pour-over method? While the method is similar, the resulting cup of Hario V60 and Chemex differs substantially.

As mentioned before, Chemex uses thicker paper filters than V60, which produces a cleaner cup with fewer oils and acidity that tastes more mellow and delicate. Additionally, while V60 features a special funnel design with grooves that guide the water and create separation. Chemex doesn’t have this.

Lastly, the fragile and delicate shape of Chemex makes it less portable than V60 pour-over. While the small V60 funnels can be made of materials that are hard to break and can withstand all the traveling challenges, Chemex is ideal as a piece of art to showcase in your kitchen. 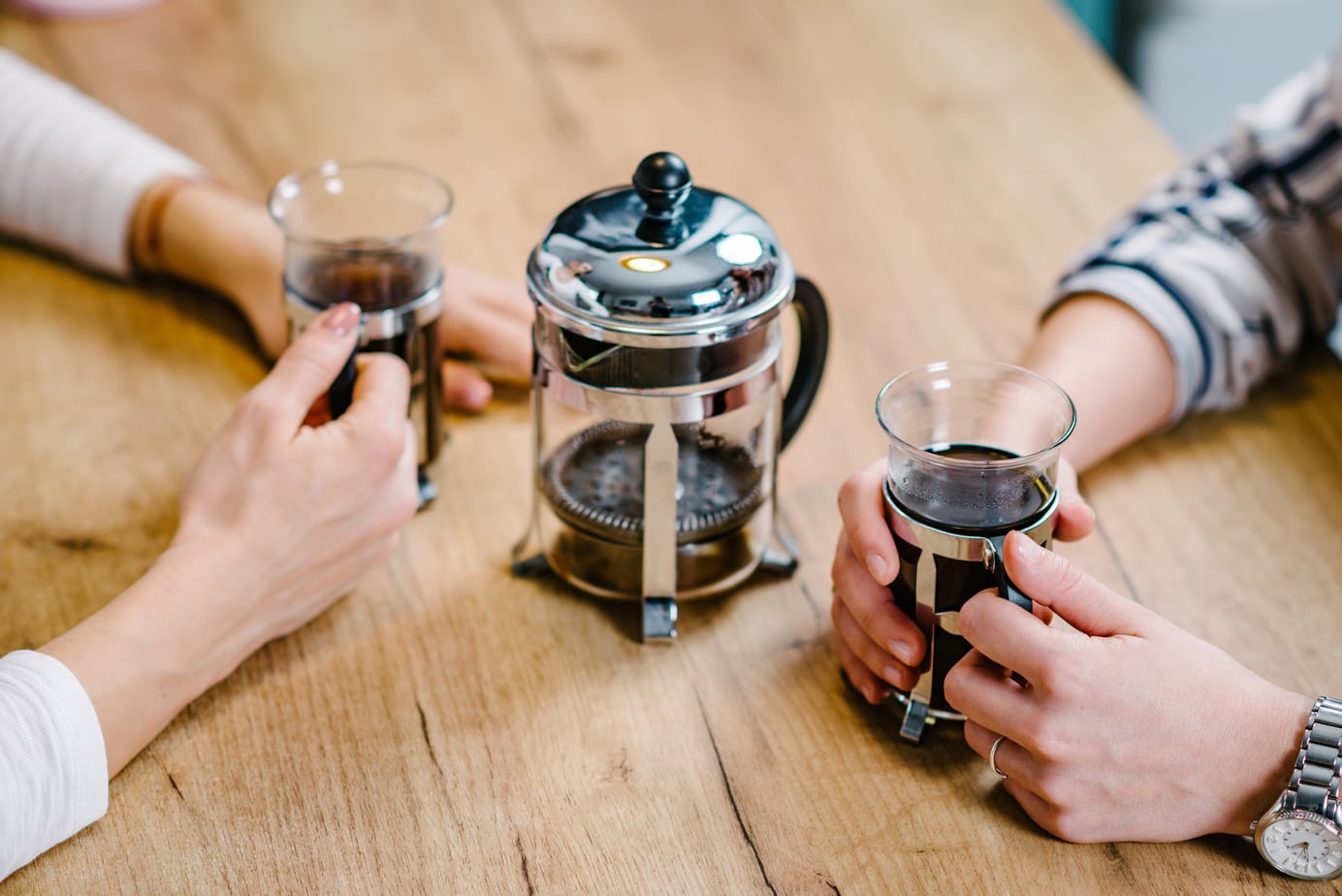 French Press Vs The Health Concerns

The concentration of the cafestol that causes the LDL cholesterol to rise in French press coffee at around 300 times that in paper-filtered drip coffee. And since high levels of cholesterol triglyceride levels are linked to increased risk of heart attacks and strokes, the concern is valid. But it is important to note that the French press preparation yields around 7% of the cafestol, which is not that significant.

While with moderate coffee consumption the effect of cafestol shouldn’t be a reason to worry, 750ml of French press coffee puts you in the risk zone. Our answer to the question is that the French press coffee is a little bit bad for you. And if you already have problems with your cholesterol, sticking to filter coffee would be a good idea.

Why Does French Press Coffee Taste So Bad?

Okay, you’re not in the risk category when it comes to your cholesterol so the cafestol levels don’t concern you. But your main concern with French press coffee is: why does it taste so bad?

The bad taste of French press coffee can have a few different reasons. It can be caused by incorrect grind size, too much acid dissolved early in the brewing process, or leaving the ground coffee brewing for too long. All of these common mistakes result in unappealing flavor and unpleasant bitterness.

How To Fix It?

Always use good quality coffee and correct coffee-to-water ratio. Make sure you choose coarse grind for your beans and don’t leave the coffee brew for too long. And since the mesh filter doesn’t fully stop the brewing process even after you’ve pushed the plunger down, our extra tip is to immediately pour the coffee out into your cup or a thermos to avoid over-extraction and unpleasant bitterness.

Chemex Vs French Press: The Verdict

The choice between these two manual coffeemakers will come down to your preferences. If you looking for an entry-level manual brewer that is easy to use, cheap, and requires little effort, and if you prefer a darker, more bitter taste, French press coffee would be a great choice.

On the other hand, extra work with Chemex brewer results in a better cup of coffee. The bigger effort and bigger investment will reward you with a superior taste that is a good choice for serious coffee enthusiasts. Not to mention that Chemex will make an excellent aesthetic addition to your kitchen.

We hate favoritism though and there are great advantages to both brewers, so why not have both? And use your French press when you’re in a rush or take it to the next camping trip while you can use the Chemex when you’re in the mood to sip on a mellow and delicate cup of coffee on a slow Sunday morning. Yum!

Whatever brewing method you choose, we won’t judge, as long as you,

How Much Caffeine is in a Cup of Coffee?