Want something with espresso-level intensity with just a little more flair? Or maybe you’re traveling and wondering what to expect abroad. Either way, we’re here to tell you that Greek coffee is a cornerstone of Greek social gatherings, rich in both flavor and culture. And with good reason!

Read on for the full low down on the history of Greek coffee, how it’s made, and what makes it so interesting.

What is Greek Coffee? 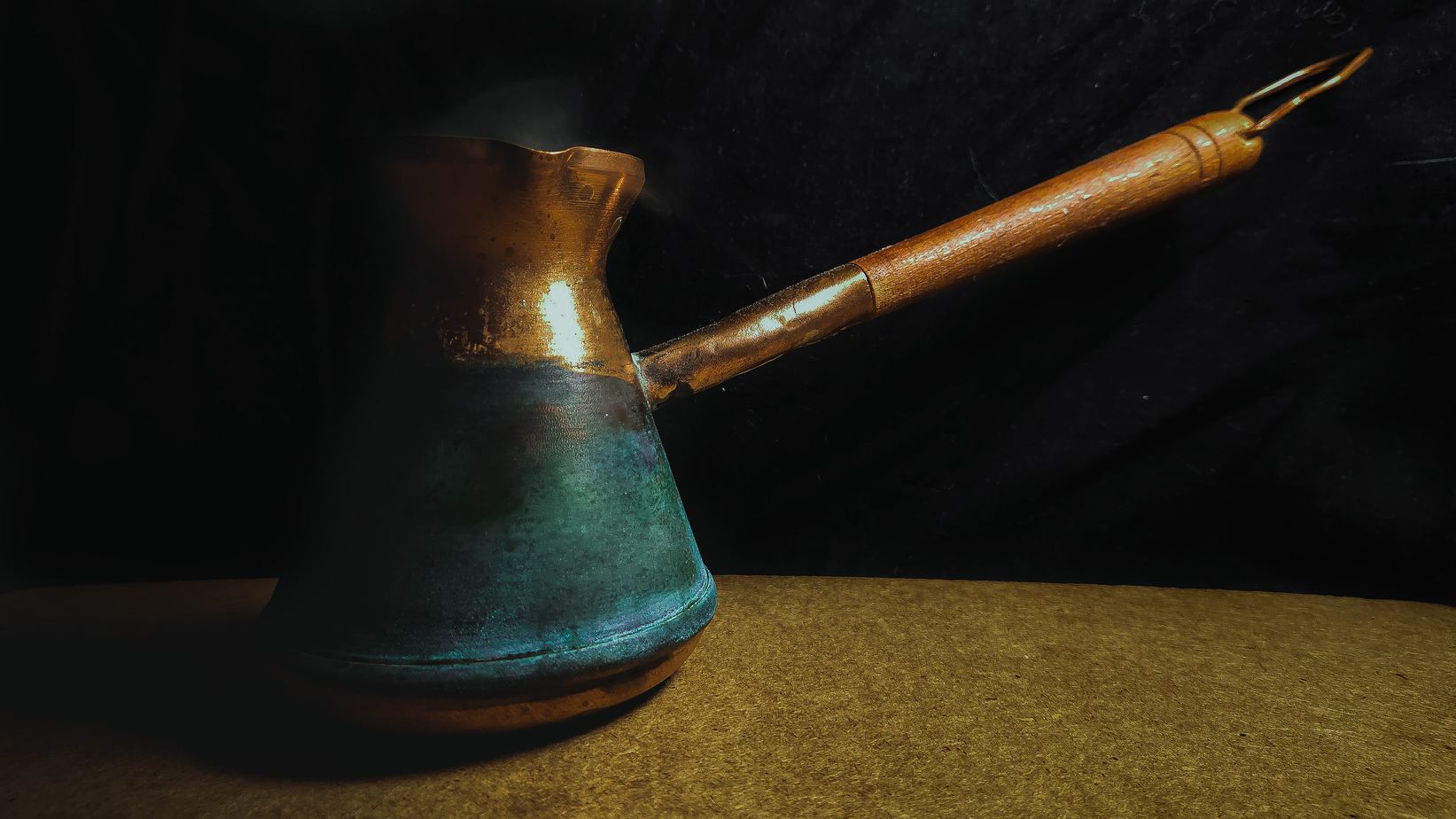 Greek coffee is unique for several reasons, with the most important being its extremely fine grind, brewing method, and serving style.

For example, brewing this kind of joe doesn’t involve a filtering method, like a standard drip machine. Instead, it’s boiled in a tall, narrow pot called a briki, cezve, or ibrik. Once boiled, the Greek coffee is served sans filtration of coffee grounds; instead, they’re left to settle in the demitasse cup (which is just a fancy term for an espresso cup).

Additionally, Greek coffee is usually served with a glass of cold water. Cookies or other sweet treats may also accompany it. This grounds-included serving style is responsible for the particular method and social practices surrounding the brew, which we will get into later.

The term “Greek coffee” is relatively new. Up until the 1960s, Greek coffee was called Turkish coffee in Greece.

However, the political tension caused by the targeting of the Greek minority during the Istanbul Riots in 1960 and the Turkish invasion of Cyprus in the 1970s caused a vernacular shift. Due to increased Greek nationalism and anti-Turkish sentiments, there was a decided push to create the political euphemism “Greek coffee.”

The sentiment behind erasing Turkey from Greek culture was so strong that even advertising campaigns acknowledged and encouraged the shift. As a result, the term “Turkish coffee” was widely deemed politically incorrect in the Greek coffee scene by the 1990s, and now, some natives have probably never even heard the term!

All About Brewing Greek Coffee

Before you start whipping up cups of coffee using the Greek brewing method, you should know a little bit more about how these beans should be ground, brewed, and consumed.

The first step of the Greek coffee brewing process is the same as any other java brewing routine: grinding the beans. Greek coffee drinks require extremely fine coffee granules, which is sometimes called a Turkish grind. These grounds are essentially powdered, almost the same texture as espresso powder, but they’re not the same thing.

Brewing in a Briki

You’re not going to be able to use a standard coffee machine to get a good cup of Greek joe. You’ll need a briki!

At a basic level, a briki is just a tall, thin pot with a long handle that angles upward from the rim. These little brewers are usually sold in sizes labeled two, four, or six cups. But don’t get “cups” confused with “servings.” Greek coffee is usually served in a demitasse cup, which holds around three ounces. There are eight ounces in a standard mug.

If you’re not exactly a math whiz, we’ll break it down for you: you can serve about six people with a two-cup briki, 11 with a four-cup, and 16 with a six-cup. Do you see why this thing tends to be reserved for a social gathering? If you’re using bigger cups or full-sized mugs, the math will work out differently. But all the same, be aware of how much beverage you’re probably going to be serving before you buy a briki.

The little Greek coffee pot should have the capacity to hold the number of servings being brewed plus one; that little bit of extra room is for the foam (which is called Kaïmaki)  to rise. Too much space and you end up with incorrectly textured foam, but if you don’t leave enough space in the briki, you’ll end up with a big mess!

As we mentioned above, demitasse cups are the vessel of choice for Greek coffee consumption. These are the identical cups most modern coffee shops and at-home baristas use to serve espresso. As you’ve probably guessed, this kind of coffee cup is pretty small, only holding between a quarter and a third of a cup of coffee. Since Greek coffee is super concentrated, much like espresso, such a small amount of joe is plenty.

The Greek-style beverage you pour into your demitasse cup is served without the addition of sugar and milk since the sugar content is determined before brewing, and honestly, milk isn’t going to work. Besides, it’s intended to be enjoyed as black coffee anyway; that way, it pairs well with sugary Greek cookies and treats and a tall glass of water.

How To Make Greek Coffee 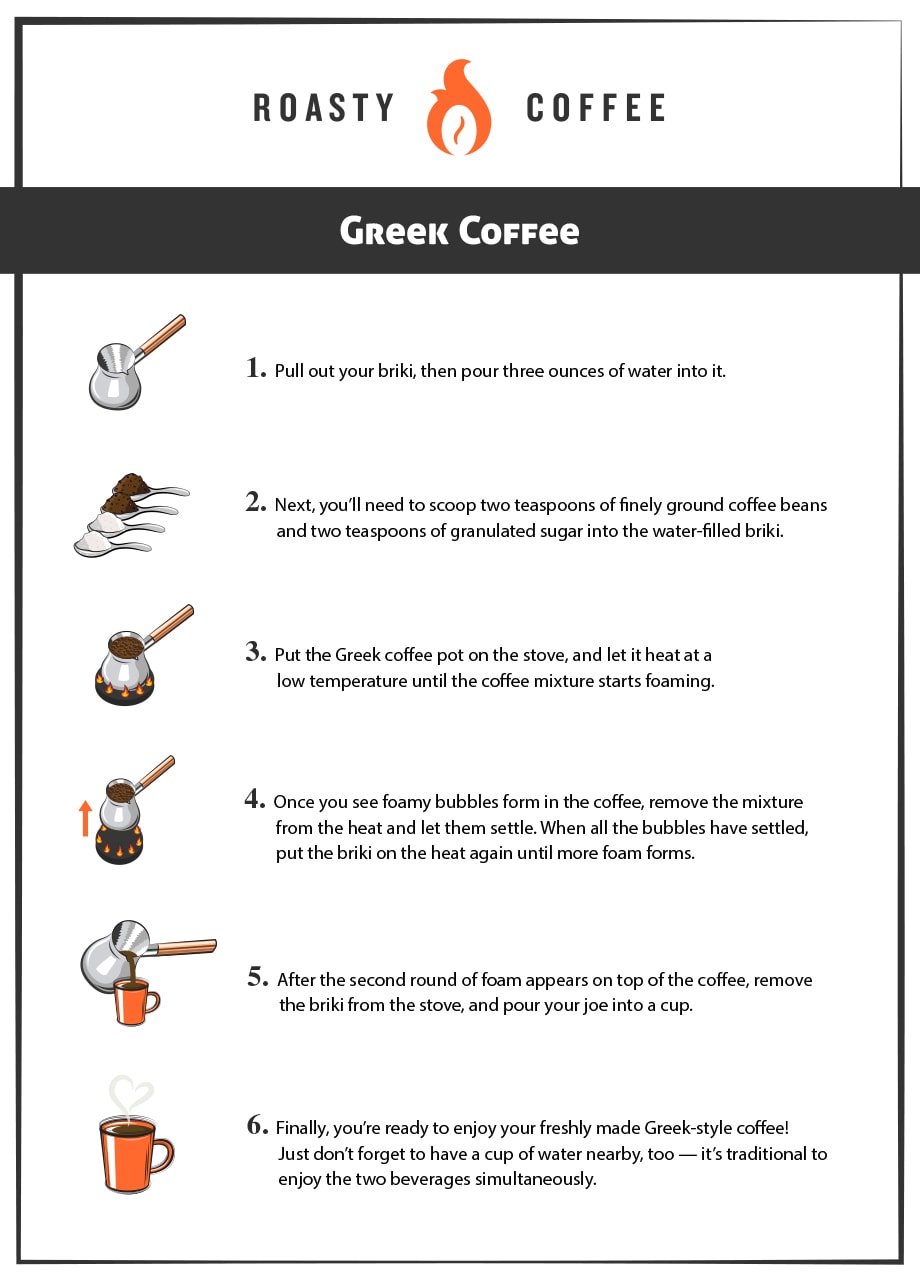 Now that you know a little bit more about this type of coffee, it’s time to gather up all the ingredients and tools you need to make a batch of this brew! No worries if you don’t have much time to spare in your morning routine, though; it won’t take you very long to whip up a cup.

Most people say Greek coffee is served black, but this can get a little confusing, especially in the U.S. Here, the term “black” refers to regular coffee with nothing added — no cream, no sugar, no flavored syrups.

As you can tell from the above recipe, this isn’t the case with this sweet coffee, as sugar is found in pretty much all Greek coffee recipes. If you hear someone say Greek coffee is black, they mean no milk is added, and the brew’s color is preserved.

So, if Greek coffee is almost always served black, where do beverage variations come into play? With the sugar, of course! The amount of sugar added is what differentiates the four main types of Greek-style coffee.

The Four Kinds of Greek Coffee

But wait! There’s one more variation of Greek coffee. We put this one into its own category because it’s made with a double boiling method. Meet Glykys Vrastros (ghlee-KEE-crah-stohss). It uses the same coffee-to-sugar ratio as Glykos Greek coffee does, but since it’s boiled more than once, it doesn’t have the same distinctive foam other styles have.

What should you serve with Greek coffee?

Aside from the glass of cold water — which is pretty much a mandatory companion for your freshly brewed Greek-style joe! — you can enjoy this coffee with pretty much any sweet treat you choose; homemade cookies, sweet biscuits, or a slice of cake. It all works well with the hot, frothy coffee.

What kind of beans should you use to make Greek coffee?

When you pick up a batch of beans for brewing Greek coffee, the general rule of thumb is to search for medium or dark roast arabica variety coffee. It doesn’t mean that lighter coffee lovers can’t enjoy this kind of brew, though. Medium and dark beans are the norm for Greek coffee, but they aren’t the rule; feel free to use whatever roast level your heart (and taste buds) desire!

So, as far as health benefits are concerned, how does this boiled brew measure up to the standard cups of drip or cold brew coffee you usually chug in the morning?

For starters, a freshly brewed cup of Greek joe has a lower caffeine content than regular coffee, which makes it a great choice for those who need to cut down on the natural stimulant without cutting out their coffee consumption entirely — think pregnant women, people concerned with their cardiovascular health, and people with anxiety.

But a lower caffeine content isn’t the only reason someone might want to get their hands on a Greek coffee maker and finely grind their favorite coffee beans. This kind of joe is considered to be one of the healthiest brews in the world!

Greek coffee has been linked to better endothelial health, improved immunity, and a lower risk of diabetes. Plus, just like regular coffee, it’s rich in polyphenols — naturally occurring compounds with antioxidant and disease-fighting properties.

Get a Cup of Greek Coffee

At this point, deciding whether or not to drink coffee may be a total no-brainer. But picking a brewing method? Well, that tends to require a bit more thought.

The next time you debate the best way to make your joe, pull out a briki and fine, powder-like coffee grounds and immerse yourself in Greek coffee culture.

And remember, this is a social drink consumed at a very relaxed pace at social gatherings or intimate local cafés. It’s not something you can down quickly on your 15-minute coffee break; patience is key with this coffee, as the grounds need time to settle at the bottom of the cup. So, be sure to invite some good friends, family, or colleagues to enjoy this hot, boiled coffee with you.

Chemex Vs French Press: The Best Manual Brewer To Suit Your Taste

What Is Siphon Coffee? Everything You Need To Know