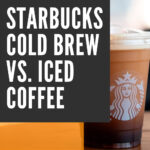 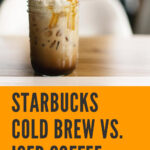 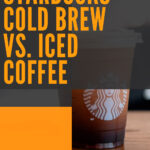 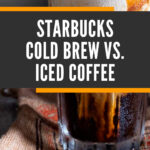 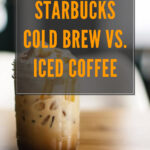 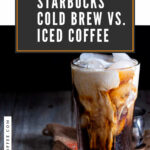 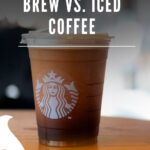 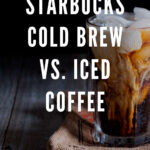 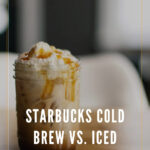 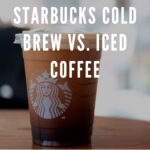 Iced coffee and cold brew coffee aren’t the same things, but it’s easy to think that when they’re both listed as “iced coffee drinks” on the Starbucks menu.

Iced coffee and cold-brew coffee are two different categories of coffee. Cold brewing is a way of preparing coffee, and iced coffee is a way of serving coffee.

Both are coffee, both are delicious, and Starbucks sells a lot of both of them. However, the debate around Starbucks cold brew vs. iced coffee is a battle that coffee lovers have been engaged in since Starbucks put their cold brew on the menu back in 2015.

It begs the question: Which is better, and is Starbucks cold brew worth the hype and the extra cost? 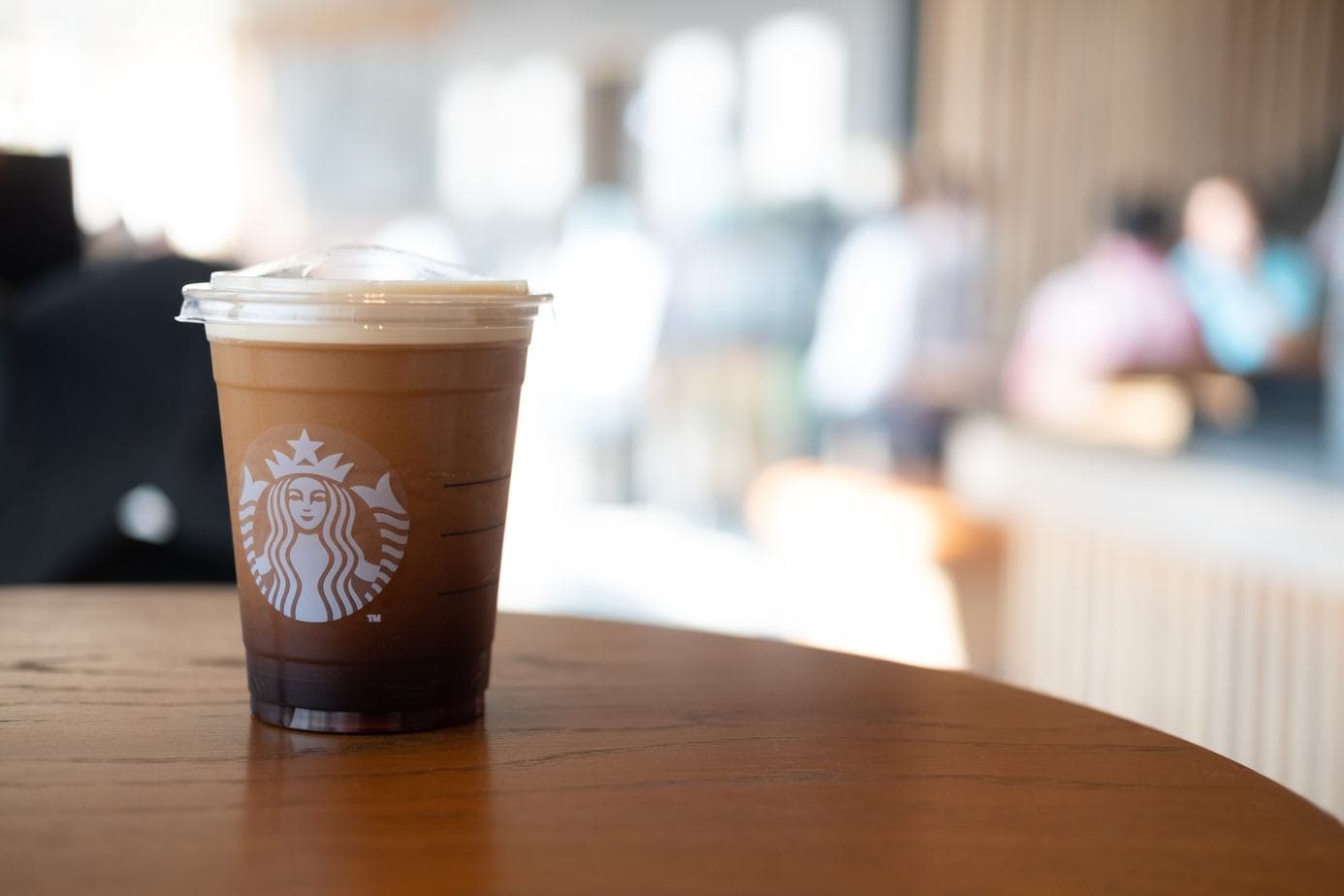 You have probably seen cold-brewed coffee at hipster coffee joints for a long time. In 2015, Starbucks put the first cold brew, iced coffee alternative, on their menu, much to the delight of cold brew lovers who had been enjoying cold-brewed coffee in their homes and had been waiting to see what the coffee giant was going to do to put their unique spin on this preparation method.

Cold brew is coffee prepared without ever touching hot water. Instead, brewing takes place by dialing down the temperature and compensating by elongating the brewing time. Thus, low and slow are the keywords to cold brew. Check out some of these cold brew coffee makers so you can make Starbucks copycat recipes at home!

Starbucks brews their cold brew in small batches every day from a custom blend of African and Latin American beans. The coarse grounds steep in cool instead of hot water for a brew time of 20 hours. The flavor slowly and gently leeches out of the grounds, and all the harsh acidity and oils are left behind.

And, good news! They have now made it a permanent menu item!

Allowing the beans to give up their flavor naturally with this low and slow method means you’re left with coffee that has none of the negative qualities associated with regular black coffee like bitter coffee notes and acid. Instead, the coffee is smooth, less acidic, and has a naturally sweeter taste, with notes of chocolate, caramel, and a rich aroma from the custom blend of beans.

When it comes to caffeine, cold brew packs a punch offering up 205 mg for a grande size drink that is easily drinkable and desirable on a hot summer day.

Choose Cold Brew Over Iced Coffee If You…

What About Nitro Cold Brew?

Nitro Cold Brew is a regular cold brew coffee infused with nitrogen bubbles then poured cold out of a tap. The resulting glass of chilled coffee has a foamy head like a glass of beer and comes out of the tap cold – no need to add ice.

With the foamy head and velvety texture, you don’t need milk or sugar to enjoy a creamy drink, but Starbucks also pairs the Nitro Cold Brew with various cream foam toppings like salted caramel and pumpkin spice.

However, the limit to Nitro Cold Brew is size. It’s served in tall and grande sizes only. The venti size is too large and prevents the foam from forming correctly.

You’ll probably want to drink a few of these, but you may want to pace yourself because each grande nitro cold brew contains 280 mg of caffeine or more.

All About Starbucks Iced Coffee

Iced coffee is a serving method rather than a preparation method like cold brew is. It’s just that: pouring brewed coffee over ice.

The key to serving an iced cup of coffee at its best is controlling the strength of the coffee and allowing the quality of the beans to shine through. Starbucks makes a practice of double-brewing hot coffee, and then it’s poured over iced before being iced again in the glass to the guest’s specifications to cool it quickly.

Making iced coffee is a simple enough process; in fact, Starbucks has the recipe on the website, which only requires ice, coffee, and your normal brewing process.

The taste of Starbucks iced coffee is dependent on the beans Starbucks is currently using to brew up their double-strength concentrate, although they tend to favor a lighter roast.

The website recommends a breakfast blend for making iced coffee at home though Pike Place is another popular choice.

Determining the right amount of ice might take a few tries, especially if it’s a hot day.

As the ice melts from the heat of the coffee, it waters down the coffee to a more reasonable level. So, requesting more or less ice in your cup will allow you to have weaker or stronger coffee. This customizability is great if you don’t want to add anything else to your iced coffee, but you want it a little less bold.

Starbucks iced coffee has notes of caramel and vanilla, but it’s well-rounded and easy to drink even without milk, although that is the tradition.

The iced coffee comes standard with the addition of classic syrup as a sweetener, but then you can customize with sweeteners, syrups, and kinds of milk to change the strength and flavor of the coffee to your liking.

You May Prefer Iced Coffee Over Cold Brew If You…

What About Iced Americano? 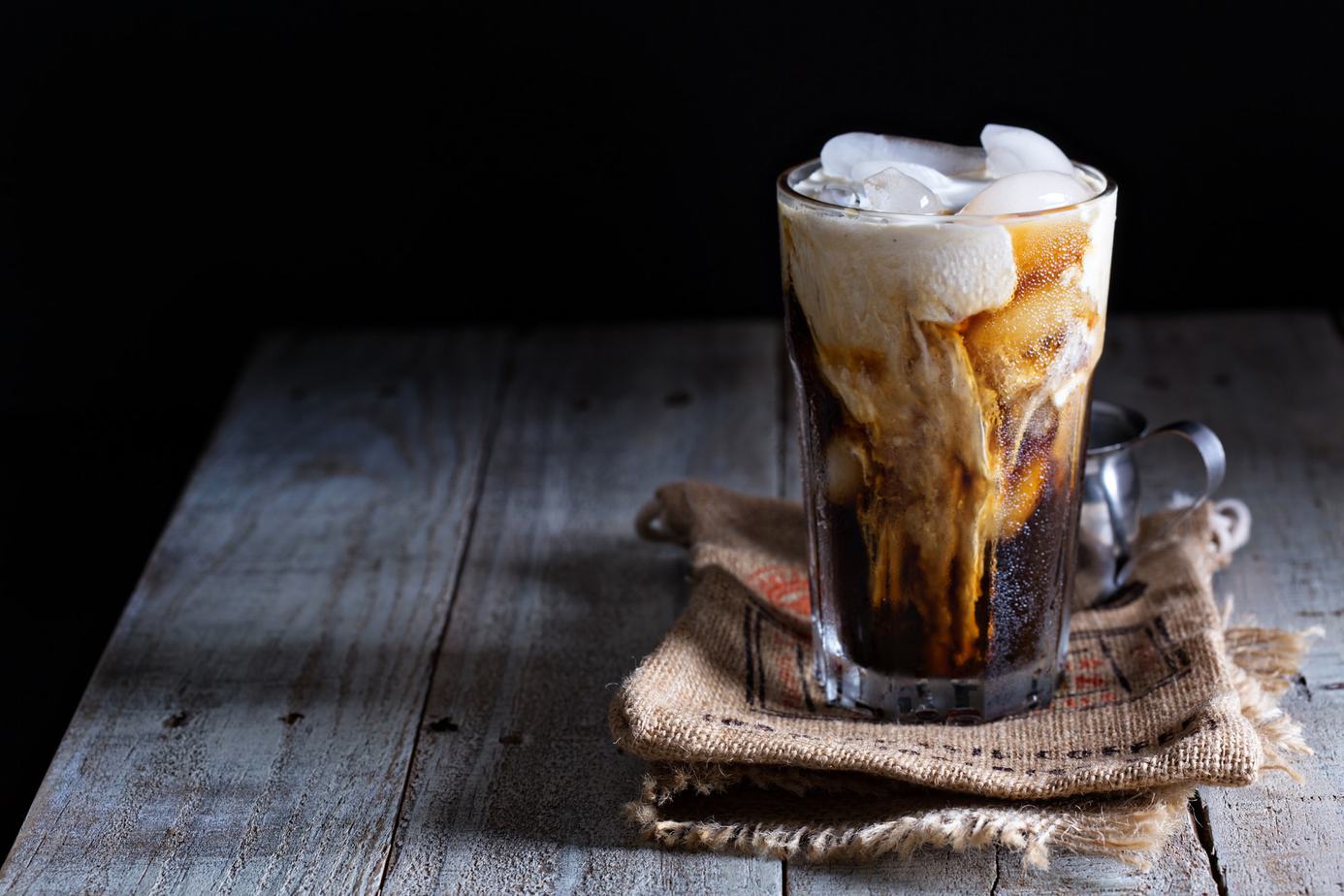 Iced Americanos are a lot like iced coffee. Starbucks takes pulled espresso shots, adds cold filtered water, and pours it over ice to further chill it.

Choose blonde espresso or add pumps of simple syrup for a slight sweetness to the final drink.

When it comes down to the debate between Starbucks cold brew vs. iced coffee, the best decision you can make is a personal one. Some days, you need the extra caffeine that a cold brew brings to the party.

Try the cold brew at least once, see how it suits you, and experience one of the numerous benefits of cold brew, whether you buy it from Starbucks or make it at home yourself.

Can You Put Peanut Butter in Coffee? Find Out Here!

Density Of Ground Coffee: How It’s Affecting Your Brew