Strolling up to the coffee shop counter in the summer has always confused me. If I ordered an iced drink, it pretty much always looked the same no matter what the barista called it (and it always tasted mysteriously of caramel). So, is there an actual difference between the most popular options, the iced macchiato and the iced latte?

Surprisingly, yes. And it’s a simple one. Macchiatos are stronger, layered drinks, while lattes are weaker, mixed drinks.

Let’s look at the differences in a little more detail. If you read to the end, you’ll also get some tips on how to make awesome iced espresso drinks at home!

What is the Difference between an Iced Macchiato and an Iced Latte? 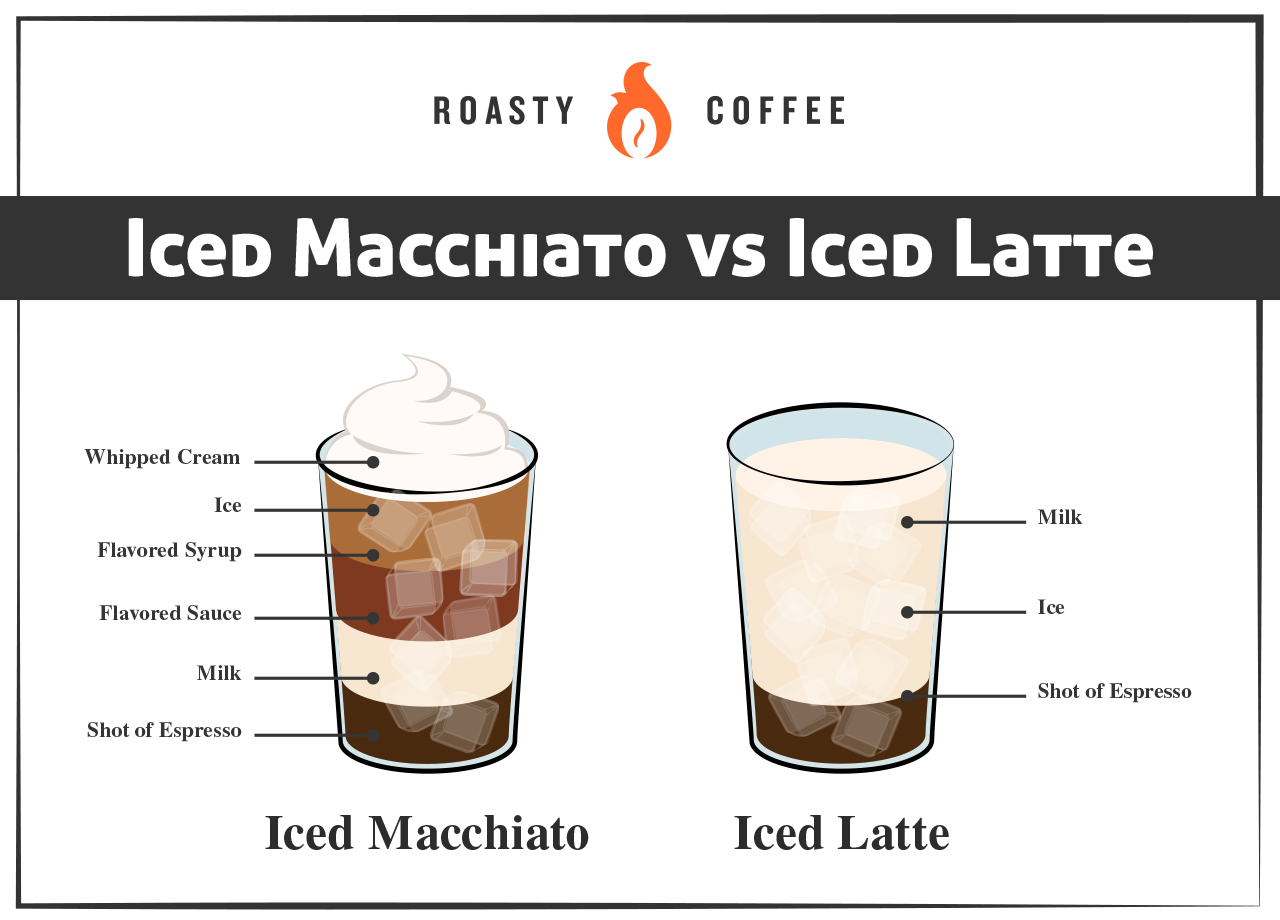 Comparing your average iced latte and iced macchiato is pretty easy if you know where to look. The most significant differences are the strength of the coffee and the extra ingredients.

An iced latte is going to be slightly weaker than an iced macchiato. It also generally contains more milk and will be thoroughly mixed, while iced macchiatos will be mostly coffee poured over milk for a marbled effect.

The difference in milk is important, as well. Iced lattes rely on lighter, low-fat milk. You make iced macchiatos with whole milk or cream. Iced lattes may have foamed milk on top or may just consist of milk and coffee, while an iced macchiato will usually have whipped cream and syrups on top.

You could also argue that the two drinks have entirely different histories. Iced lattes have been on coffee shops’ menus practically since commercial coffee shops became a thing. Iced macchiatos are a bit newer to the party, though. They only joined the ranks in the past few years, spearheaded by Starbucks.

How are Iced Lattes and Iced Macchiatos Similar?

The drinks are still pretty similar, though. Both rely on espresso rather than regular coffee. They both have simple bases of milk and espresso that work well with tons of other flavors.  Because they’re so simple, they’re popular summer drinks and popular drinks to make at home.

Both of them are different from their hot counterparts in that a critical element has changed. For the lattes, the milk isn’t steamed. For the macchiatos, there’s more milk in general. That doesn’t change their basic taste, though.

In terms of taste, other than intensity, both drinks are going to taste similar. If made with the same coffee and syrups (as they often are), the only difference would be intensity.

How is an Iced Latte Different from a Hot Latte?

Comparing the two is all well and good, but what makes an iced latte an iced latte? Is it just the same thing as the hot version? Not quite.

We go way more in-depth on the idea here, but basically, a classic latte is a combination of amazing espresso coffee and steamed milk that’s mixed at about a 1:2 ratio. It’s super simple and doesn’t take much effort or complicated equipment to make (yes, even for the steamed milk).

The iced version, similar to iced coffee but much more potent, is super simple and makes few changes from the hot version. Instead of steaming the milk, you usually just pour it cold. It’s also becoming more popular in many places now to serve iced lattes with some cold cream on top instead of regular foam for added flavor.

It’s an excellent drink for a quick summer pick-me-up.

How is an Iced Macchiato Different from a Hot Macchiato?

So a person who doesn’t drink coffee at all has probably at least heard of a latte, but the other option would probably confuse them. What exactly is a macchiato?

Macchiato is the term most coffee shops use to refer to a drink that’s halfway between a shot of espresso and a cappuccino. It’s also mostly coffee – macchiato means “stained,” so you’re “staining” the coffee with a bit of milk.

It also happens to be my go-to coffee shop order, though, so I might be biased.

Hang on, hang on. If lattes and macchiatos are completely different drinks, then what’s a latte macchiato?! Good question!

A latte macchiato is a steamed glass of milk with a stain of espresso. It’s essentially an inverted espresso macchiato; it focuses on the milk rather than the actual coffee itself. It’s also usually a layered drink, with the milk at the bottom, a layer of robust espresso, and foam at the top.

A latte macchiato is weaker than a regular latte because it’s mostly milk with a shot of espresso added in. It’s still made with whole milk, though, so it’ll have a slightly richer flavor. The iced version doesn’t usually have foam, either.

If you wanted to get the best of both worlds, the latte macchiato would be the way to do it. You get the steam of a latte with the light layering of a macchiato.

How Other Iced Espresso Drinks Compare

Interesting side note: A cappuccino is the mid-ground between the two, with more coffee than a latte and more foam than a macchiato.

The most significant difference is that it usually doesn’t contain any milk at all.  Iced cappuccinos tend to be served with cold foam, which is frothed milk that hasn’t been steamed. The foam is also usually flavored and sweetened.

You can also just have straight-up iced espresso, which is just a cold espresso shot. Pretty good if you’re already a huge espresso fan. If you prefer the taste of espresso hot but want a cold refresher, affogato – or an espresso shot over vanilla ice cream – is a good option too!

I guess on a scale of coffee-ness, it would go: shots of espresso (with or without ice cream), macchiato, cappuccino, latte.

Both iced latte and iced macchiato coffee recipes are super simple to make at home as long as you’ve got the right ingredients.

First, you’ll want some fantastic espresso beans. You’ll then want to make sure those roasted coffee beans are ground correctly (fresh grinding is fantastic if you can pull it off). Espresso grounds should be fine, with a consistency like granulated sugar.

Next, you’ll want some great milk. You can make lattes with tons of different kinds of milk, including lots of lactose-free options. Macchiatos, on the other hand, are best made with high-quality whole milk.

If you’re looking to flavor your coffee, you’ll want a nice syrup. A standard recipe for basic simple syrup is equal parts water and sugar, reduced until thick but not quite caramelized. You can make infused simple syrups (think vanilla or rum) by adding extracts to the mix while it’s hot.

For a caramel sauce, let the mixture cook until it turns golden brown, then take it off the heat and gently add some water back in to keep it from solidifying. Salt and vanilla make the flavors really pop.

How to Make a Great Iced Latte 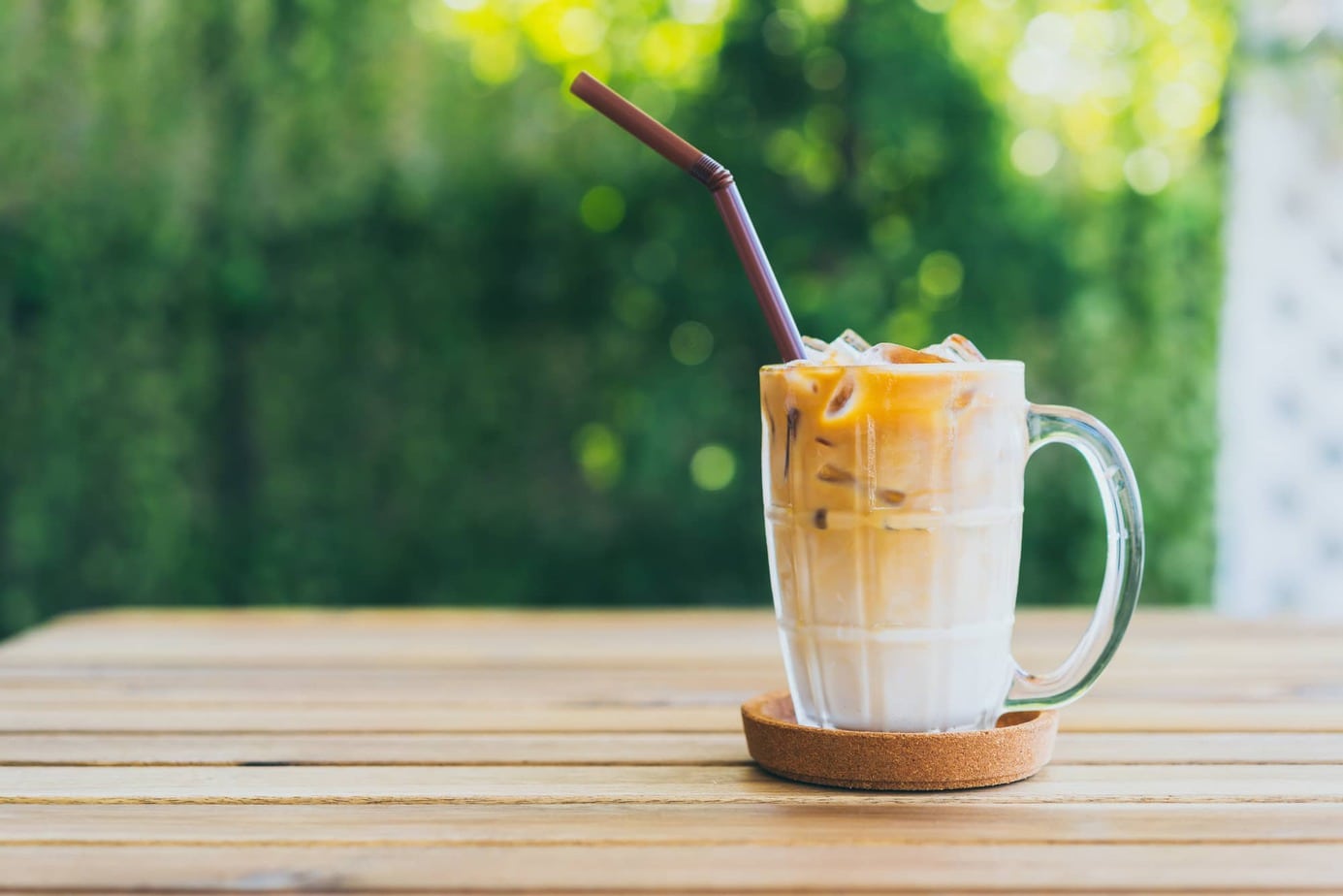 Add ice to your tall glass and pour one shot of your (hopefully homemade) espresso over the top. Pour your milk over the top, add flavoring (we recommend caramel or vanilla syrup), and you’re done!

For extra barista points, try steaming the milk before putting it over the ice. That way, you end up with a nice foam on top.

How to Make a Great Iced Macchiato 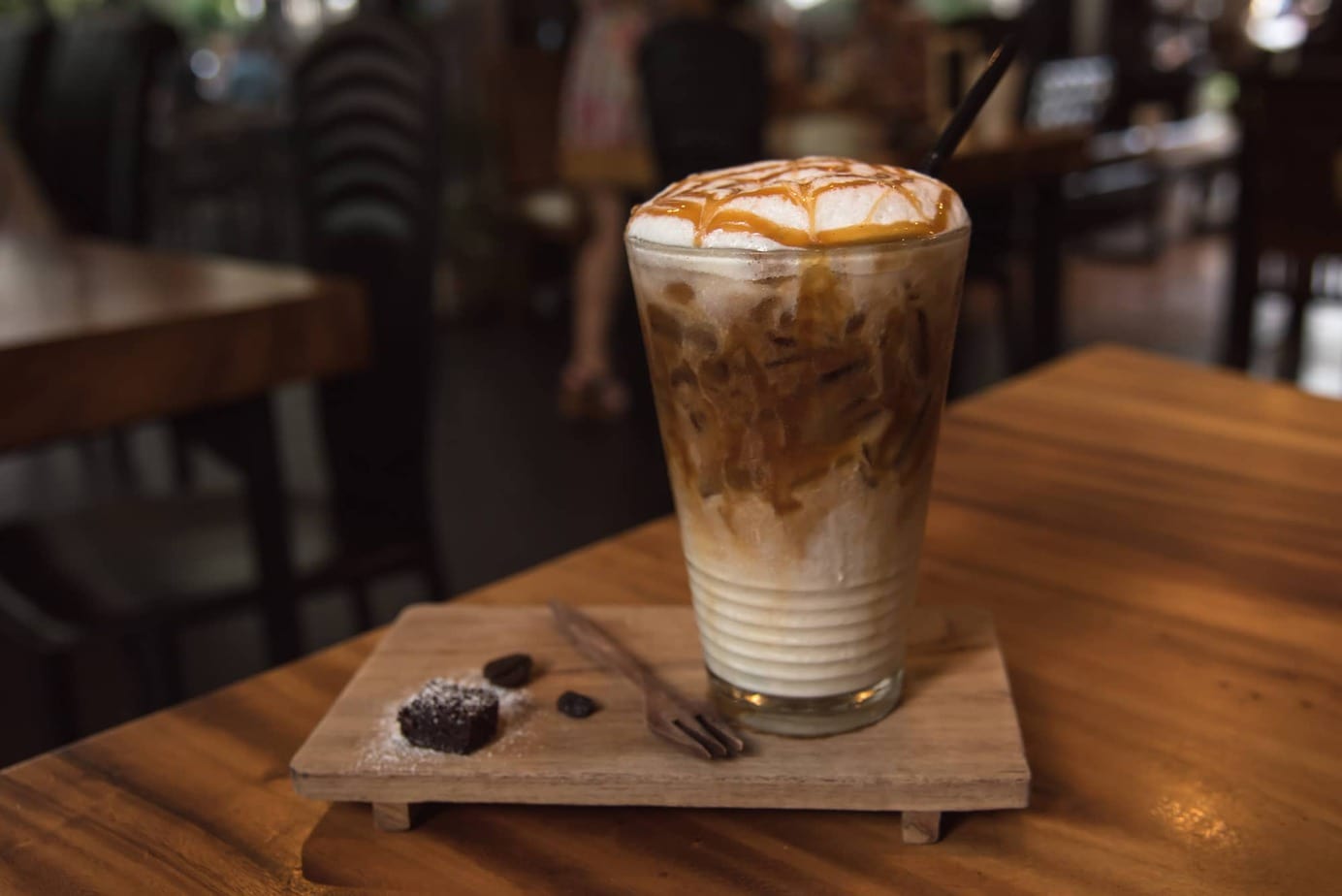 Prep your glass with ice, then pour over your whole milk. Then, if you’re feeling particularly fancy, you can use the back of a spoon to layer your espresso on top of the milk-filled glass.

You can replicate pretty much any coffee shop caramel macchiato with a high-quality caramel sauce drizzled into the glass ahead of time, and then by finishing the drink with whipped cream and more sauce on top.

All Espresso is Good Espresso

If you’re looking for a refreshing morning drink, then both the iced macchiato and the iced latte are going to be great options. There’s not a “best” option here – it all comes down to personal preference. So, get out your espresso machine and brew up a batch using a good-quality coffee bean. Then get it nice and cold to make your favorite espresso-based coffee recipe.

If you like your coffee strong and at the forefront when you’re drinking, you’ll want to go with an iced macchiato. If you’re a fan of flavorings and don’t necessarily need that much espresso in your face (me), you might go for an iced latte instead.

Whatever you choose, enjoy your espresso like anyone would: sipped through a straw slowly for like ten seconds then super fast because it’s delicious.

And now you need a second cup.

How To Start Drinking Coffee