Ordering coffee can be stressful. With all the different coffees available each with vague descriptions of “milk+espresso,” it can be quite confusing. So today, we are on a mission to make things a little bit easier by breaking down the differences between two of those coffees: cortado vs latte. 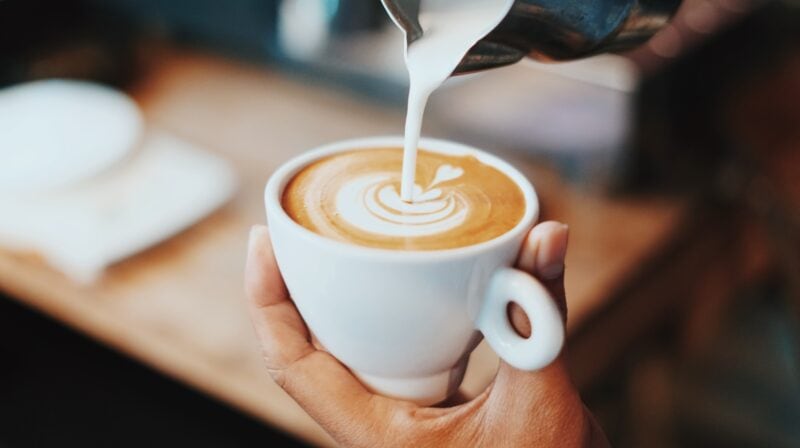 Begin with the Basics

Just about every coffee drink served in your local shop is made using two basic ingredients: espresso and milk (usually steamed milk and foam). First, let’s take a look at how these ingredients manifest in a cortado vs latte.

Like many other specialty coffee beverages, both the cortado and the latte are made using a base of espresso. In fact, both drinks tend to use a doppio or double shot of espresso.

So regardless of which drink you decide to order, you can expect one or two ounces of espresso to make an appearance. That’s 65-130 mg of caffeine!

Another commonality between the cortado vs latte is the addition of milk. Specifically, the barista steams and adds the milk after the espresso has already been added to the cup, creating a layered effect where the coffee gets stronger the more you drink.

However, you should know that these coffees do not contain the same amount of milk. Also, only one of them relies on milk foam to complete the drink. So let’s look into what makes each drink unique

What is a Cortado?

It’s likely the style of drink that inspired the coffee cortado originated in the Basque country of Spain. Spanish coffee drinks tend to have little to no foam, a distinctive feature that separates them from their Italian coffee counterparts. However, Cuban-Americans in the 1960s typically get the credit with the drink’s creation.

“Cortado” comes from the Spanish word meaning “to cut”. While, at first, that may seem strange, it actually makes a lot of sense. In a cortado, the milk “cuts” the espresso to make the coffee smoother.

Cortado coffee is made with equal parts espresso and steamed milk (sometimes lighter on the milk part). Some shops will leave a very small layer of milk foam. Others will leave it off entirely in a more traditional Spanish style.

You may also find the cortado labeled as “Gibraltar coffee“. This terminology was rather arbitrarily coined by a San Francisco-based café called Blue Bottle Barista in 2005. Their inspiration for the revamped name is the type of glass that cortados are typically served in (a Gibraltar glass).

What is a Latte?

Unlike the cortado, the latte was conceived in the birthplace of espresso: Italy. Due to the high dairy content, it remains a popular breakfast beverage, like the cappuccino.

However, the drink we know today was popularized in the United States. The word “latte” comes from the Italian word “caffè e latte” (other variants include “caffeelatte” and “caffellatte”), which simply means “coffee & milk.” Over time, the shorthand version “latte” took hold, particularly in American coffee shops.

This coffee drink contains 1/3 espresso and 2/3 milk. The Latte also has a small (but certainly present) layer of microfoam on top. In some larger chains, a latte might have enough milk to completely outpace the coffee flavor from the shot of espresso.

But a true latte, made in your local coffee shop, should have a certain balance between the coffee and milk elements. While they won’t be in equal parts, they should still be complementary.

Many baristas use the latte as a canvas for some truly incredible works of latte art. By manipulating the microfoam and steamed milk as they pour, talented baristas are able to create delicate designs and patterns atop the latte.

The most noticeable difference between cortado vs latte is the size of the two coffees.

A cortado is 3-4 ounces, with 2 ounces of espresso and 1-2 ounces of steamed milk, topped with little to no foam. So this is a relatively small drink, usually served in a rather small glass (usually with a 4.5-ounce capacity–half the size of an average coffee).

On the other hand, lattes tend to have 2 ounces of espresso topped by 6-8 ounces of steamed milk. Lattes have a healthy helping of microfoam that lends them their distinctive texture. Thus, a latte is about double the size of a cortado.

This question really comes down to the milk content. Both the cortado and the latte are usually made with a shot or two of espresso, which is virtually calorie-free anyway. However, as mentioned above, the amount of milk contained in each coffee is vastly different.

Most cafés will default to using whole or 2% milk. For a cortado, that means you are looking at between 16 and 36 calories versus the 93+ calories you can expect from a latte. If you want to shave off a few of those calories, you can go for a flat white instead.

However, a cortado remains the healthier option. Even if you opt for different substitutes, the volume difference between these two coffee beverages is going to render the cortado the more health-conscious choice.

So there you have it, regardless of which coffee you opt for, you are looking at a milky concoction with a healthy helping of espresso at the bottom.

The short and sweet version of the difference between these coffees is that the cortado is smaller with a stronger coffee flavor, and the latte is going to be significantly larger and milk-forward.

Hopefully, this quick guide can help you make a quick decision the next time you visit your local coffee shop.