Ghana is a country located in Western Africa, with a population of approximately 30 million people. Traditionally, it has been known for its gold, crude petroleum, and cocoa exports. Yet over the last decade, there has been a huge push in coffee production.

Unlike the giants of the African coffee world like Ethiopia or even the up-and-comers like Zimbabwe, Ghana’s history with coffee until now hasn’t been one to write home about… but that’s exactly what they’re trying to change.

The country is already a big, worldwide supplier of cocoa and so there is great potential for it in the coffee industry.

Is coffee grown in Ghana? And is it worth a shot?

Today we’ll take a look into a country working hard to make a name for itself in the coffee world. Everyone and everything has to start from somewhere!

We wouldn’t blame anybody for thinking that Ghana had nothing to do with coffee production since even way back in the 1960s it was known primarily for its cultivation of cocoa beans (back then, it was the world’s largest producer, until Ivory Coast took its place).

Only in the 1980s did the government establish coffee plantations around the country to diversify and extend the country’s income. 19 plantations were set up and eventually divided for private ownership.

Until very recently Ghana’s success in the coffee market has been slow: it is the third smallest coffee producer in sub-Saharan Africa, behind Liberia and the Central African Republic.

Fortunately, in 2001, a scheme was launched that led to 2,400 hectares of new and revitalized coffee plantations around the country. Many more farmers became interested in the production of coffee because of the new, fair prices for the crop.

As you can imagine, Ghana’s climate is fantastic for the production of coffee cherries. To be more specific, the coffee species that thrive the most in the country is Robusta, and this is cultivated in 6 of the 10 Ghanian regions – these include:

The coffee season in Ghana begins in September and runs through to January. When the rains begin in May, that’s when the farmers begin planting the crops.

If a farm is maintained well, then it can produce 1.8 tons of coffee cherries per hectare annually! This shows why coffee is a promising alternative for small farmers, as it is much easier to grow a large number of coffee beans compared to a crop like cocoa which requires more time and effort.

Unlike other, more elevated regions in Africa, Ghana’s highest points are only about 400 meters above sea level. Unfortunately, this means that the production of Arabica coffee isn’t possible as it requires higher altitudes to grow. But hope is not lost because Robusta flourishes at the lower elevations and tropical temperatures that Ghana is ideal for. 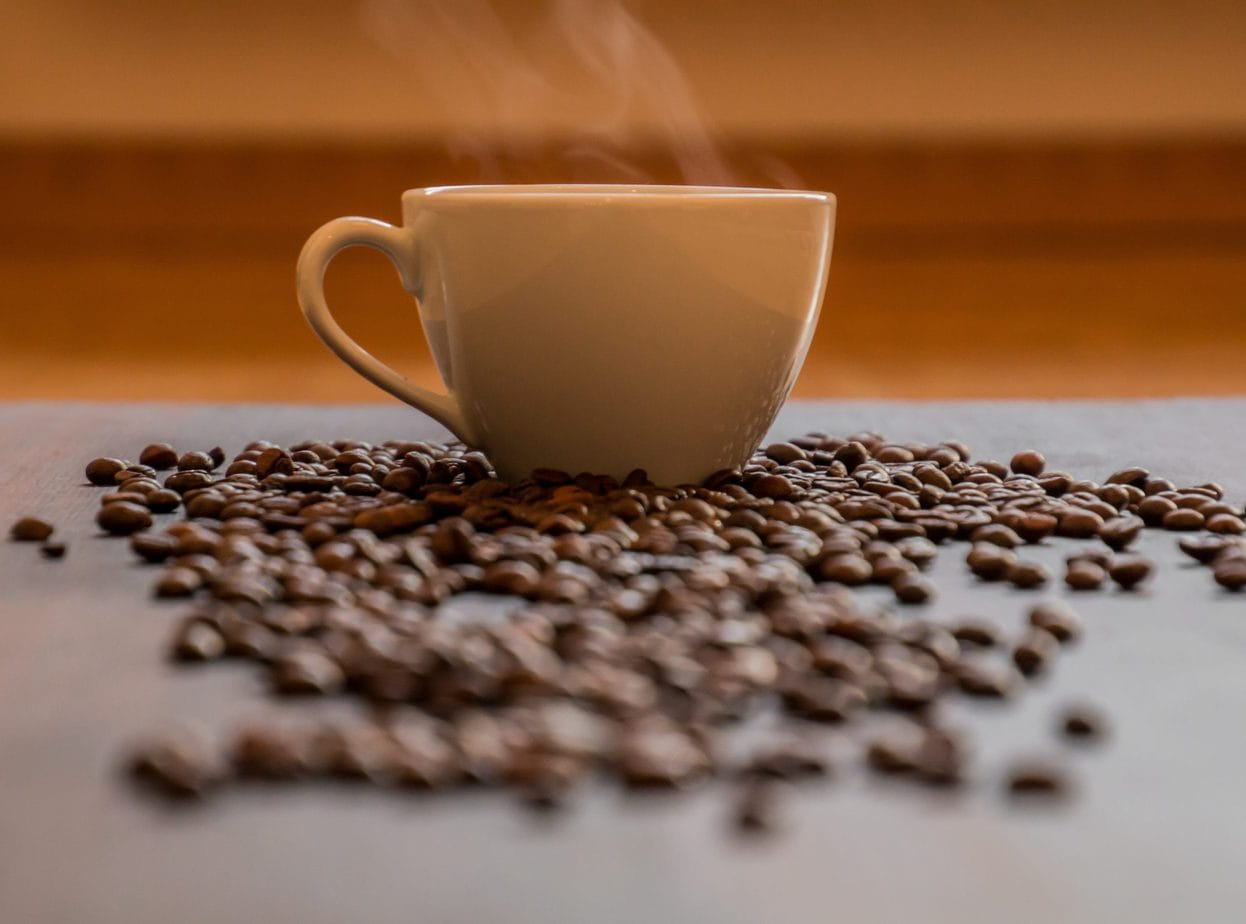 That’s right, Ghanaian coffee is mostly Robusta, which is considered to be an inferior coffee compared to Arabica, its counterpart. This, however, gives Ghana a competitive advantage in its coffee production.

Since Robusta is typically less expensive to grow and thrives in a warm, tropical climate, this gives Ghana a lot of breathing room and the ability to export coffee cherries at a lower cost. Even though it’s not normally preferred, Robusta still has a huge role in the coffee market.

Not only are these Ghanian farmers working hard to grow more and more coffee, but they’re also trying to improve the quality of it. These farmers are passionate about what they do and are using their skills to help benefit the Ghanian coffee industry.

What Is Robusta Used For?

Arabica coffee is usually considered much higher quality and superior to Robusta: it is much less acidic and contains a higher number of oils (15-17%) and sugars (6-9%) which makes for a more traditionally pleasant cup.

But (and that’s very important but!) Robusta has fantastic qualities that make it unique and this is why the coffee from Ghana stands out. In this coffee there is:

Also, Robusta’s high caffeine and CGA (Chlorogenic Acid) content make it much more resistant to disease and pests that exist in tropical climates, it’s a perfect sturdy crop to grow in Ghana. This means it’s economically more suitable that Arabica as much larger quantities can be grown safely and securely.

Getting Green in Ghana

Ghana is fairly new to coffee production in general and it’s even wetter behind the ears when it comes to exporting green coffee beans (this is coffee beans that have not yet been roasted).

Only in 2006 did the government decide to double its green coffee production to 3,000 metric tons. Not deterred by such a huge number, by 2010 farmers had managed to double that figure, producing 6,000 metric tons.

By 2021, Ghana’s president Mahama wants to increase the country’s output to 100,000 tons. This huge increase in production has required a big investment from farmers across the country, as well as reinforcement and support from the infrastructure that the Ghanian government can provide.

To promote their coffee Ghana are placing their best green coffee in competitions in the international coffee market. This will hopefully get the attention of buyers in the United States, Canada, and Europe.

From there, their coffee would be sold in third-wave coffee shops and cafés where it would be bought and sipped-on by lots of curious customers!

As you can imagine, coffee consumption is on the rise in Ghana. Only recently, it has been made possible for the people of Ghana to buy and enjoy coffee. A few years ago, a cup of brewed coffee in a café may be as expensive as $2.60, which is just not affordable for many Ghanaians.

However, purchasing green coffee (beans that have not been roasted) is a much cheaper and more viable option. This means that the public can roast their coffee and help grow the numbers of passionate coffee lovers.

In the more urban areas of Ghana like the capital city of Accra, the number of specialty coffee shops is growing. As more and more coffee is produced in the country, it is becoming easier for budding business owners to earn a living selling specialty coffee drinks.

Over time, more professionals are taking their business meetings over a cup of locally brewed coffee, more experts are searching for quality espressos in the city centers, and locals can afford to enjoy a drink from their new, local cafés selling affordable coffee.

Though most of the coffee is being brewed and enjoyed in the larger cities, there’s a growing distribution network. This growing network guarantees that Ghanian coffee will find footing in the wider market. The main sources of distribution both at a national and international level are: 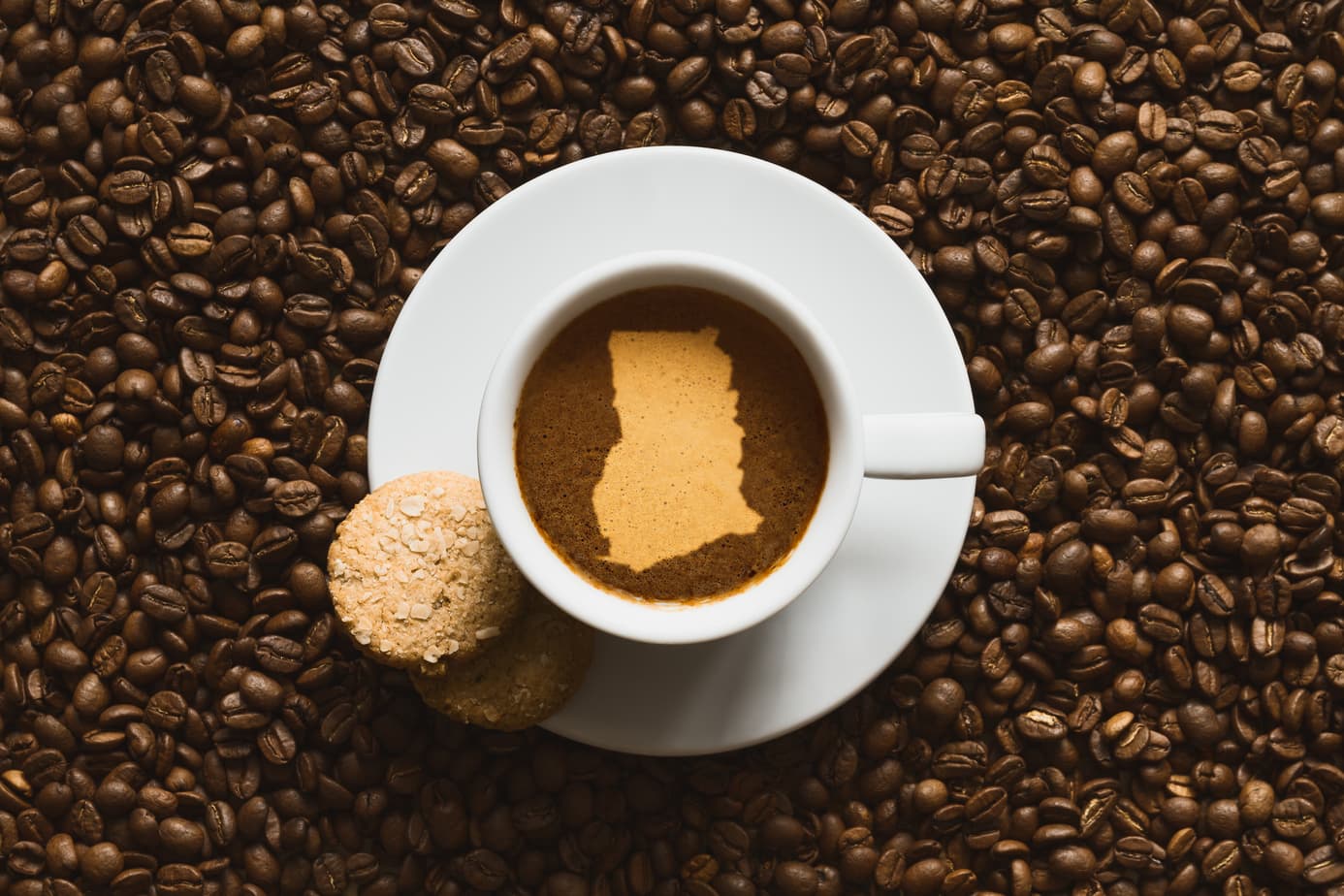 The Future For Coffee In Ghana

The plans to revitalize the production of Ghanaian coffee by the government have given hope to the country’s coffee farmers, as well as the youth who are struggling with burgeoning unemployment levels. There is trust in the government to make Ghanaian coffee the way for many people to make a living and support their families.

The government plans to produce 200,000 metric tons of the crop by the year 2030. If they pull this off, Ghana will start to become a major producer of coffee in Africa and maybe one day reaching the incredible heights of Ethiopia.

And don’t forget, the more coffee that is produced the more small businesses can brew delicious Lattes, Cappuccinos, Americanos and Espresso with fantastic, fresh Robusta beans farmed locally. This will give the farming and café communities much more incentive to find success with Ghana coffee.

It’s exciting to look at the coffee industry in Africa because it’s always changing. We’ve already covered the coffee goldmine in Kenya, the under-appreciated beans from Rwanda, Zimbabwe’s wine-like cherries, and now the delicious Robusta of Ghana!

It’s easy for Ghana coffee to fly under your radar and the coffee industry in Ghana is nowhere as developed as their production of cocoa, but the coffee culture is growing and major developments are happening to catch up with the coffee production of Ghana’s African rivals.

Keep an eye on this one, Ghana’s Robusta is worth a try. If you’re not afraid of the jitters, that is.

What’s The Latest You Should Drink Coffee?

Why Does Coffee Make Me Poop?